Wildfires rage across the West 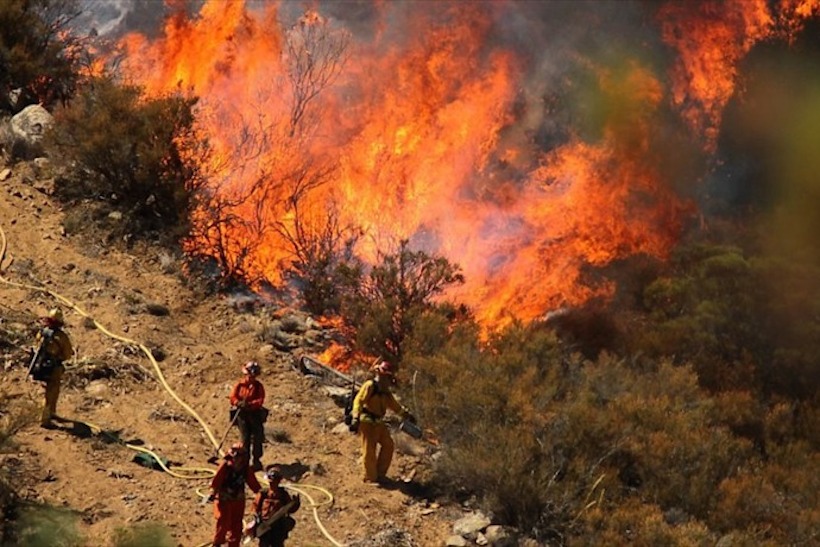 Firefighters do their best to extinguish a fire in Oregon near Sprague River.
Photo Credit: EverythingLubbock.com

Exacerbated by climate change and the western drought, wildfires have been getting bigger, more destructive and more expensive to fight.

The number of major fires across the country is soaring. Forty-three large fires have scorched more than 650,000 acres across the nation. As of now, there are 31 un-contained large fires in Idaho, California, Washington, Oregon and Montana.

As we reported last week, Washington is having the worst wildfire in the state’s history — and entire mule deer populations are being evicted from their habitat.

U.S. Forest Service Chief Tom Tidwell, a 33-year agency employee, spoke to the Coloradoan about the current state of the wildfires, explaining that this has become sort of a pattern.

“This tracks with what we’ve been seeing almost every year. There’s a new state record. Last year (it) was California. The year before that it was New Mexico. Arizona two or three years ago set a record,” said Tidwell.

When asked about the typical success rate in fighting the fires, Tidwell says that they “suppress 98% during the initial attack.” The 2% that goes un-contained, however, can be catastrophic.

“Under the right set of conditions, where you have dry (vegetation) and strong winds, no matter how many firefighters, how many engines, how many helicopters, how many aircraft (you deploy), you’re not going to be able to suppress that fire — until it burns into a different type of vegetation and the weather conditions change,” Tidwell explained.

The costs of suppressing the fires has skyrocketed as well.

Every year since 2000, the U.S. Forest Service - the primary federal agency responsible for combating wildfires - has put more than $1 billion a year towards fighting wildfires. Since 2002, they have gone over budget in 11 out of 12 years.

In three of those years, the shortfall exceeded $1 billion. In 1991, only 13% of the Forest Service’s budget was allotted for fire suppression. In 2012, the Forest Service diverted 40% of its congressional appropriations for fighting fires.

To pay for the exorbitant costs, the Forest Service and the U.S. Interior Department have had to reallocate funds from other accounts. Though the U.S. Congress eventually reimburses the agencies, the Forest Service says that these transfers detract from its ability to execute other important work like thinning forests and clearing brush to reduce the risk of wildfire.

To avoid this “fire borrowing,” President Obama submitted a request to Congress in July for $615 million in emergency funding. Congress went on its August recess without approving that request.

Wildfires cost the public a lot more that the costs of extinguishing a fire. After a blaze, funding is needed to rehabilitate the land, to prevent soil erosion, and to treat the health costs of smoke inhalation. The growing number of fires also means that more carbon is released into the atmosphere. This creates positive feedback loops that causes even more stress on the climate.

For current update on the national wildfires, click here.