Trophy bowhunting for the first time 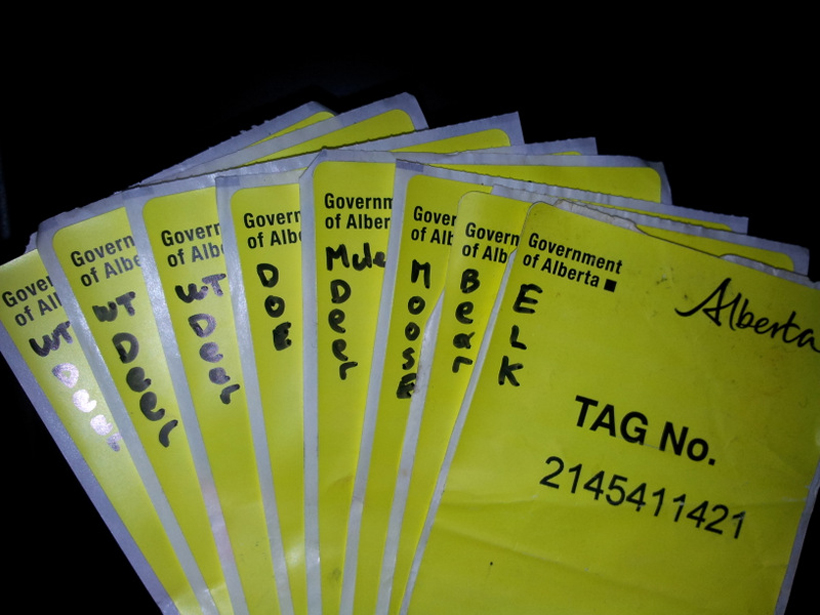 I’ll never forget when my dad told me to shoot the first legal buck that came by — this was my first year of bowhunting 15 years ago. It was sound advice (still is) and thankfully, I listened. I shot the first spike buck that came into range at 16 yards that fall. What a thrill! I knew then that I would be hooked for life. For the next 10 years, I filled my freezer with deer and moose of any size and sex that I had permits for and in Edmonton, Alberta’s world famous bowzone, that is a lot. 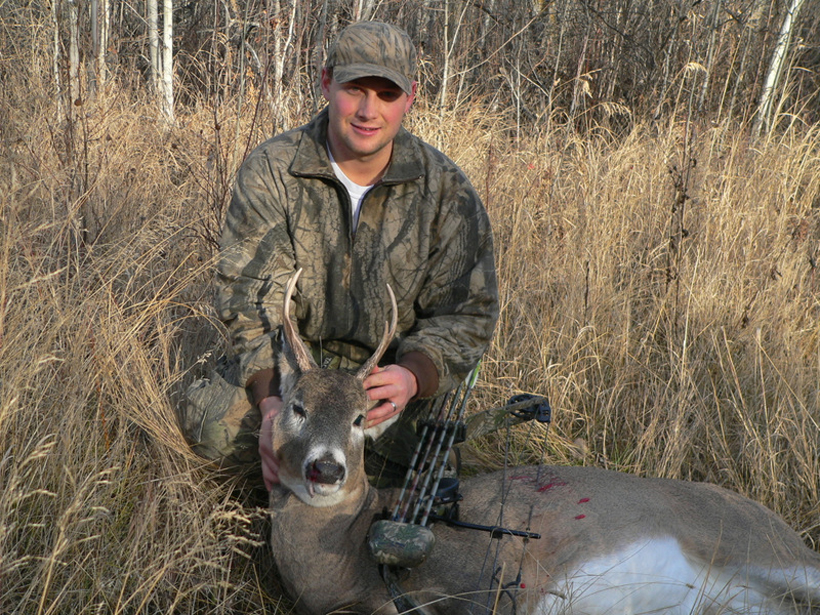 Some years I would get a deer on opening day, and others a few weeks into the season, but each and every year I managed to arrow something for the freezer. The point is, I was bowhunting and shooting everything that I was legally able to shoot, and having a great time doing it.

Those were not the only words of wisdom that my dad passed down to me over the years — he always told me to first, get good and then get famous. I’m still working on the famous part, but shooting all of those legal animals, no matter the size, allowed me to grow into the bowhunter I am today. I even had a mature buck come by one year when he came out hunting with me from Ontario. 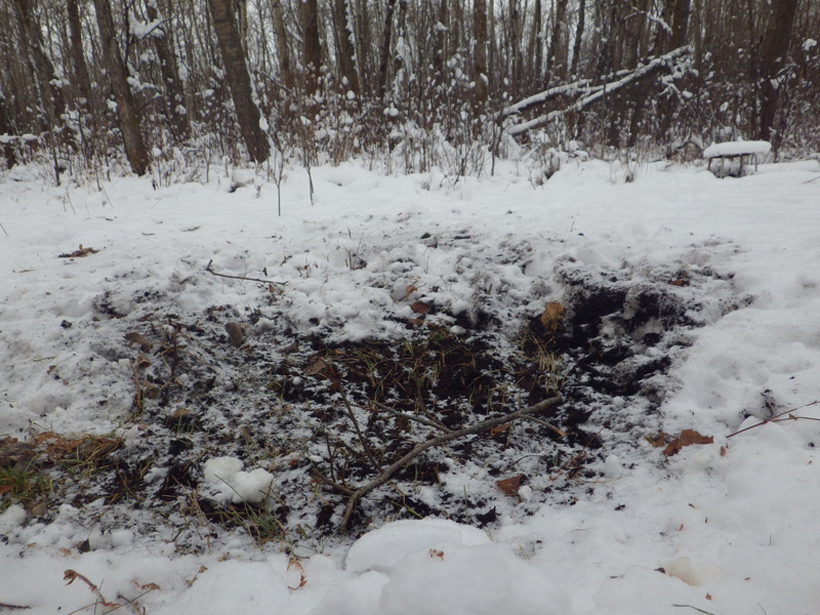 As with most hunting spots, they do not last forever and because of a variety of circumstances, I had to seek out another honey hole that was luckily just as good. That November, after I filled my tags on some young bucks and does, I found several large scrapes and no other human footprints. It was going to be a long winter waiting again for opening day on September 1, but I was as excited as ever. 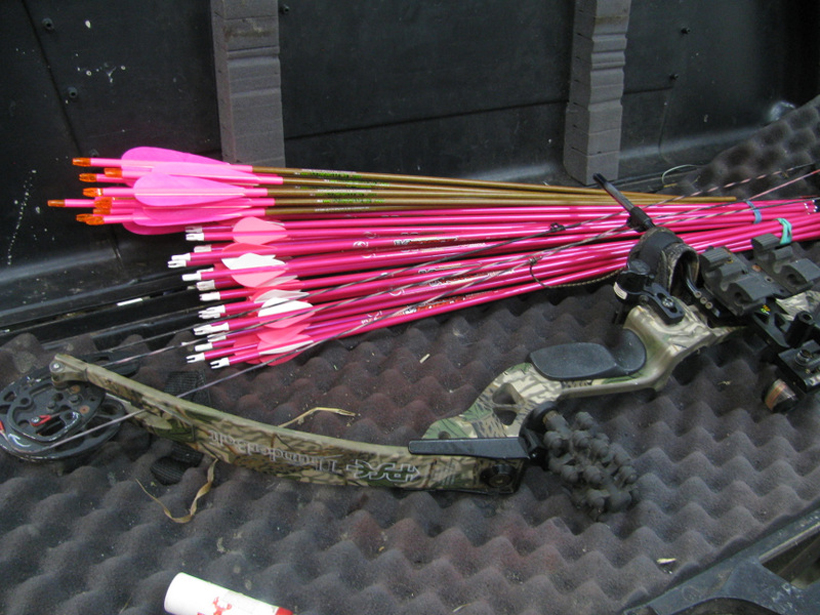 Over the winter months, I did the usual activities to pass the agonizing time waiting for opening day, 3D shoots, restocked arrows, went skiing and tuned my bow. 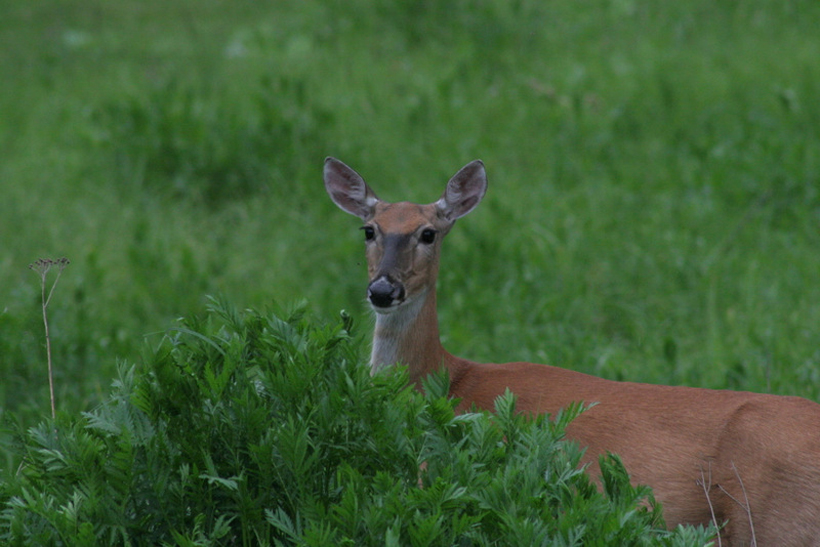 Before I knew it, the snow melted, the green grass came back and the reddish hides of whitetails were everywhere. I was especially excited this year because of the large amount of rain we received in the spring. This prompted a lot of Internet forum threads discussing the potential for an excellent year in antler growth. 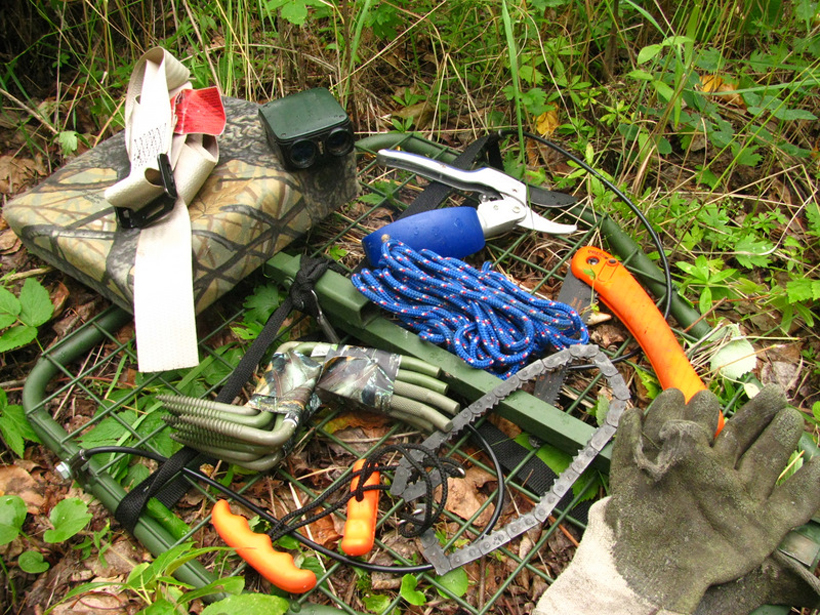 Even though I shot a few animals from my current treestand perch at my new honey hole, I picked out a new spot that I felt was even better. I was successful with my treestand bordering the agricultural field, but I felt I wanted to be further back in the woods after observing the deer habits of the past season. So, I picked a cool summer day and moved my treestand.

That summer, I also ditched my peep sight for an anchor sight to help show incorrect form in my shooting, which was mostly torque. A few hundred practice shots later in realistic situations, I soon felt comfortable and had no signs of torque. 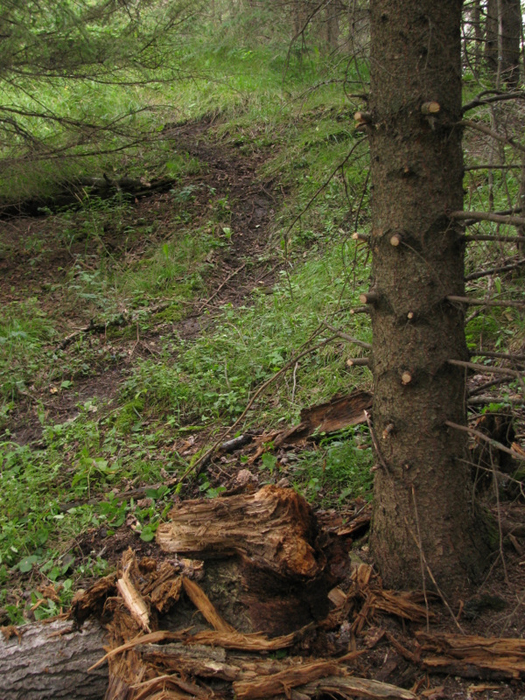 Like any good deer hunting spot, there were a lot of game trails, and I ended up finding a pounded trail that crested a ridge in the form of saddle. After some minor limb clearing, I had one of my trail cameras setup to take some good shots of incoming deer. 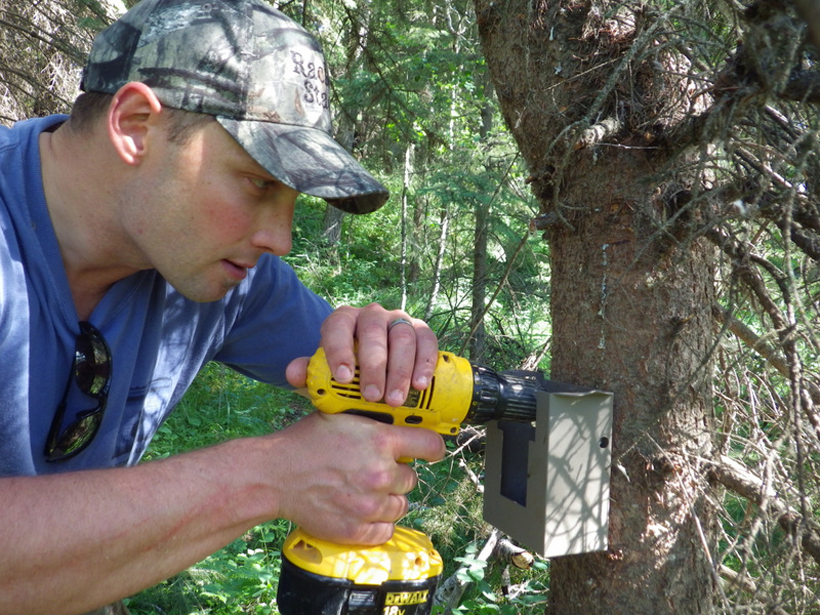 Despite never seeing another hunter on this private ground that I had permission to hunt on, I always secured my trail cameras just to be on the safe side. I have had them go missing in the past and I must say, I would rather have the thief keep the camera and return my pictures! 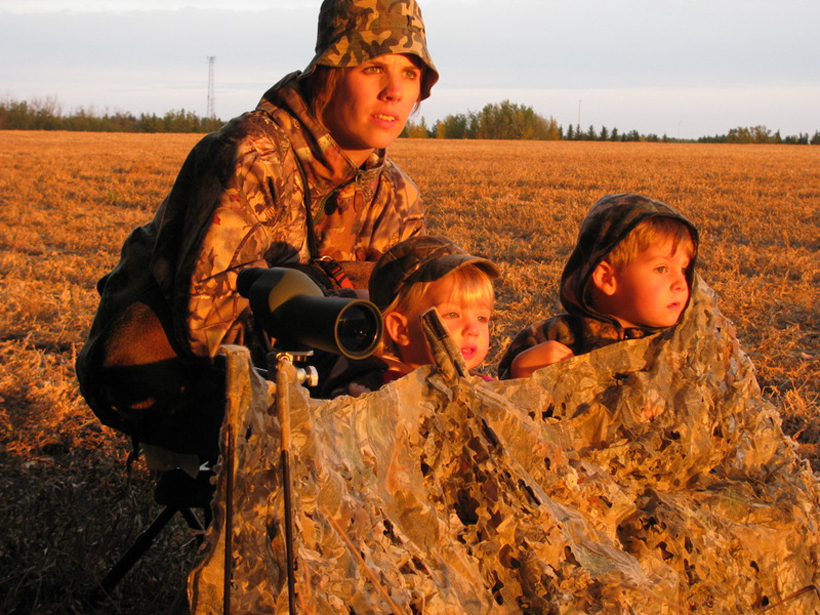 One late summer night, I decided to take the family on a scouting trip. I made it seem real for my young kids and wife as we dressed up with camouflage and watched a herd of eight deer from safe distance. As a bonus, a couple moose showed up as well. 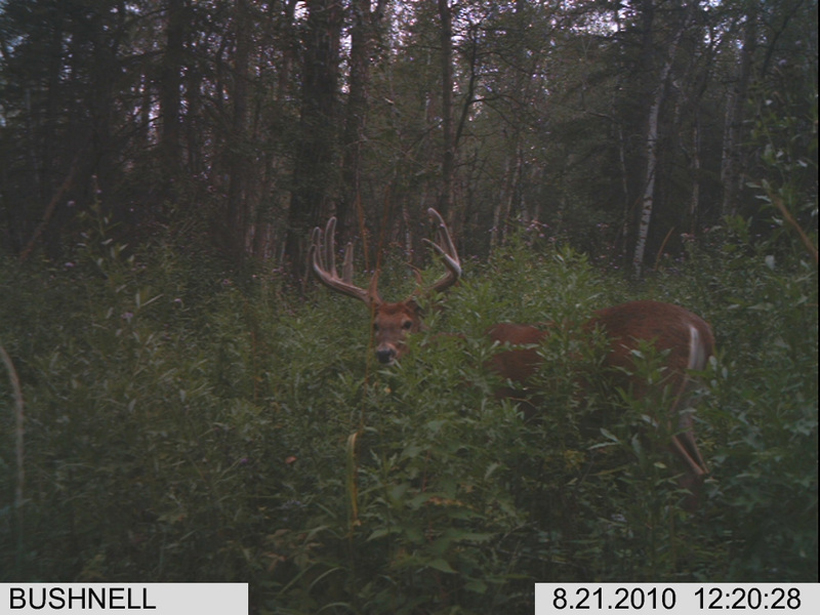 During that scouting trip, I quickly ran into my spot and pulled out my trail camera cards for the first time in a couple months. Like any bowhunter, I could not wait to view them when I got home. Halfway through clicking through the thousands of pictures, it happened — my first ever targeted buck appeared on my computer screen. 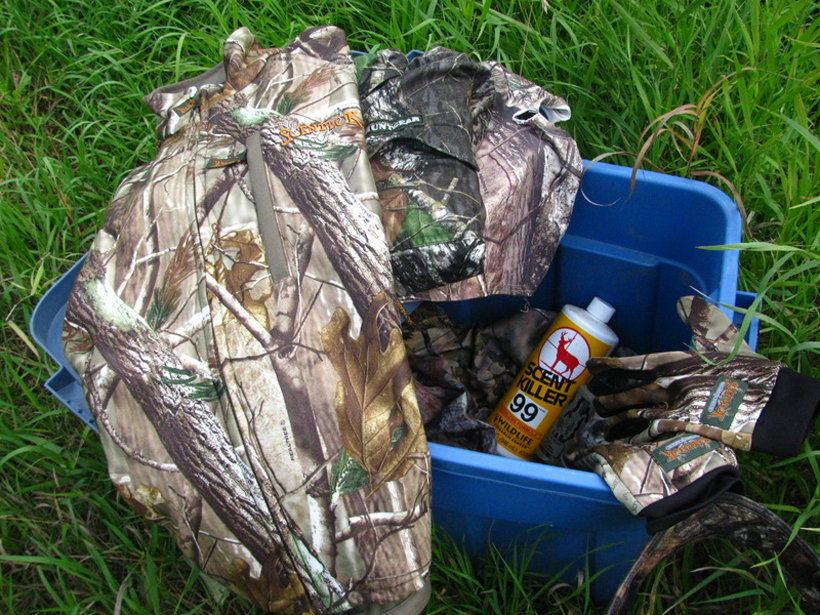 Being a rookie to Pope & Young scoring, I did not have a clue what he would score, but I decided I was not going shoot any other buck but him. That was the first time I ever decided to make a commitment to one animal. I knew I would have to be on top of my game in the fall, so I made sure my gear was ready, scent free and properly stored in a sealed container. 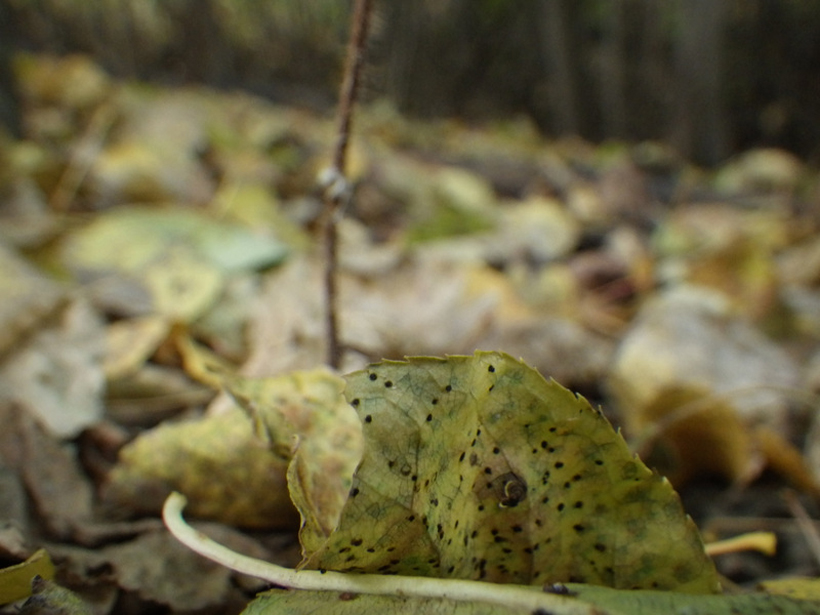 I only hunted a few days in the early season of September (mainly because I was off hunting moose) and was only going to harvest does, saving my buck tag for later. As October came and Canadian Thanksgiving passed, the leaves began to fall. 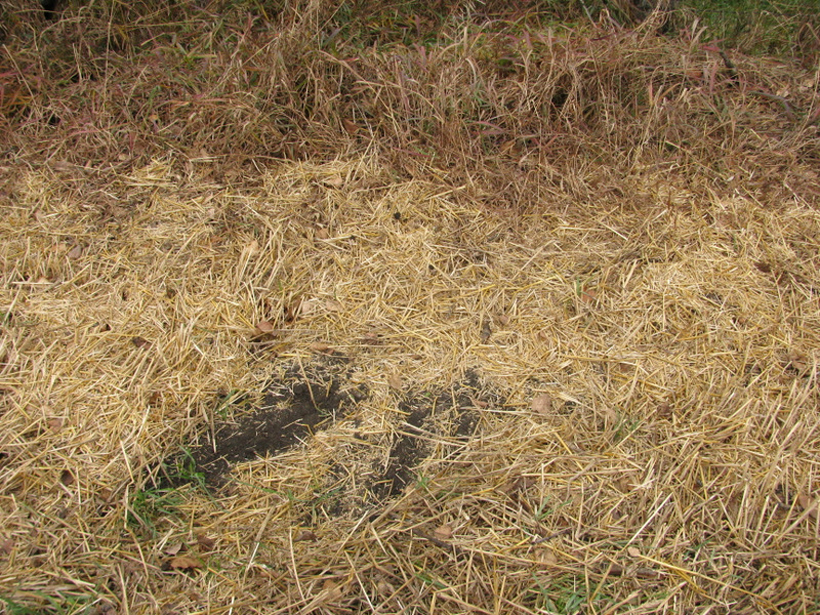 The signs of the rut started appearing in the same places as the previous year. My early sits revealed that the does would usually come out first into the field, followed by the bucks, increasing in rack size as it got darker. 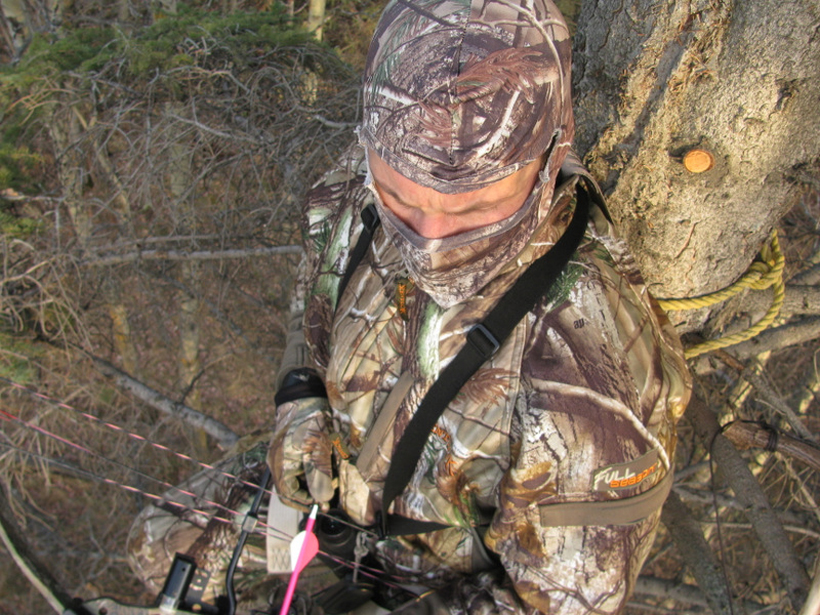 The deer were using the same trail to enter the field and my new treestand location was setup perfectly in a coniferous tree that would provide decent cover into the winter months if needed. Ambushing opportunities were simply a matter of putting in time. 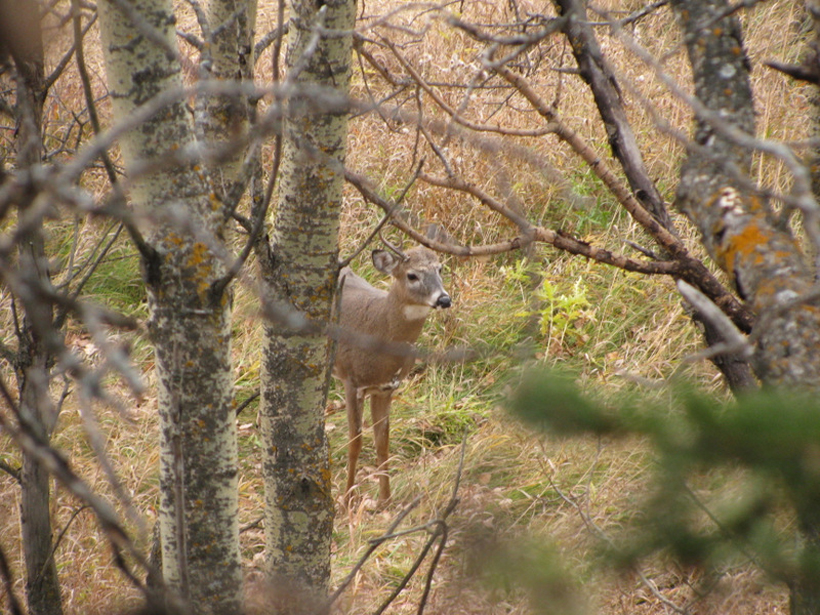 During the first week of November a small 3x1 buck came into range and offered me a clean shot. I passed for the first time ever and expressing my feelings later, on an internet forum hoping that I would not regret it. I remember the quote from an anonymous user, “you can only shoot big bucks if you pass on little ones.” 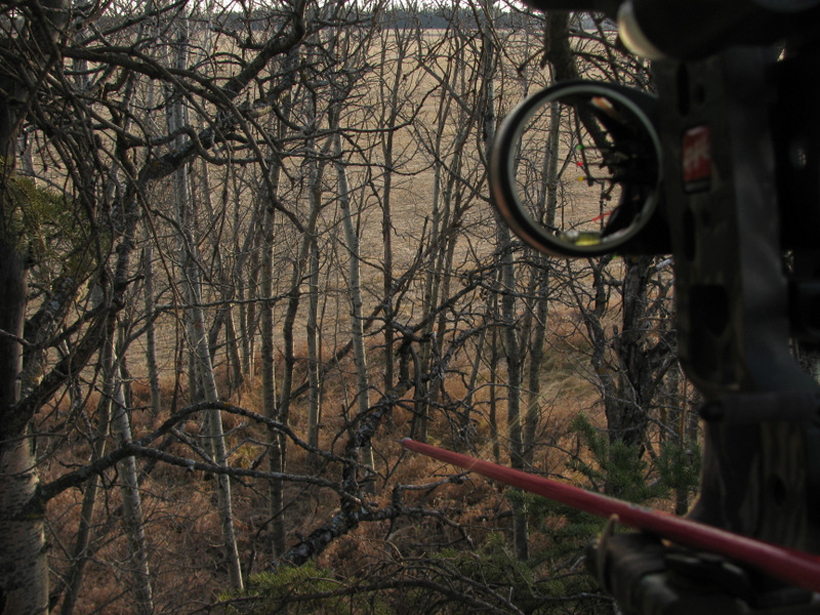 A week later, about 10 minutes before legal light ended, I heard footsteps behind me. I slowly turned my head around to get a view of the sound and saw my buck’s rack towering well above his head. Unfortunately, he was not using a field entry trail that I was setup on and he quickly dashed out into the field, 16 yards from my old treestand location. 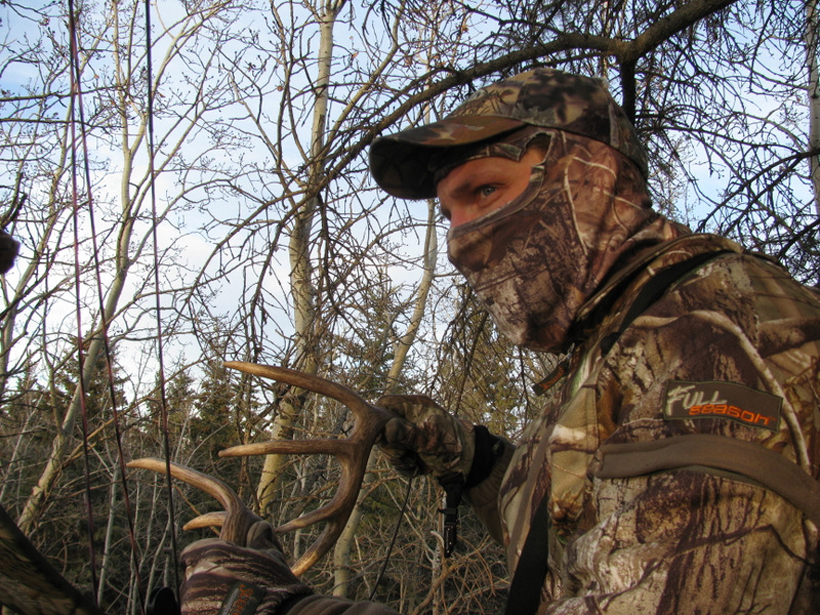 I immediately started rattling. He focused his attention and peered my way. I had so much good cover in my treestand that he could not make me out, which allowed me to rattle as he stared me down. I used some aggressive rattling techniques and he finally committed to leaving the field and entering the bush. He came running back into my 32-yard shooting lane.

I stopped him with a “bahaha” sound. I was really glad I ditched my peep sight earlier in the year, since I had no trouble seeing my pin during these final few minutes of legal light. I drew and anchored, quickly referenced my anchor sight and sight bubble and settled the pin just behind his shoulder and released the arrow. A perfect heart shot and he dropped in sight 43 yards away.

As I walked up to him, I could not believe I was able to rattle him back into range, especially a buck of this caliber. Because I was able to watch his demeanor after my rattling sequences, it gave me an advantage. As soon as he showed signs of losing interest, I would rattle as hard as I could, making him look my way.

It was a terrific experience hunting a single buck one-on-one. I have always been all smiles for any deer I harvest, but to look him in the eye was something special. It was then that I understand what drives a trophy hunter. 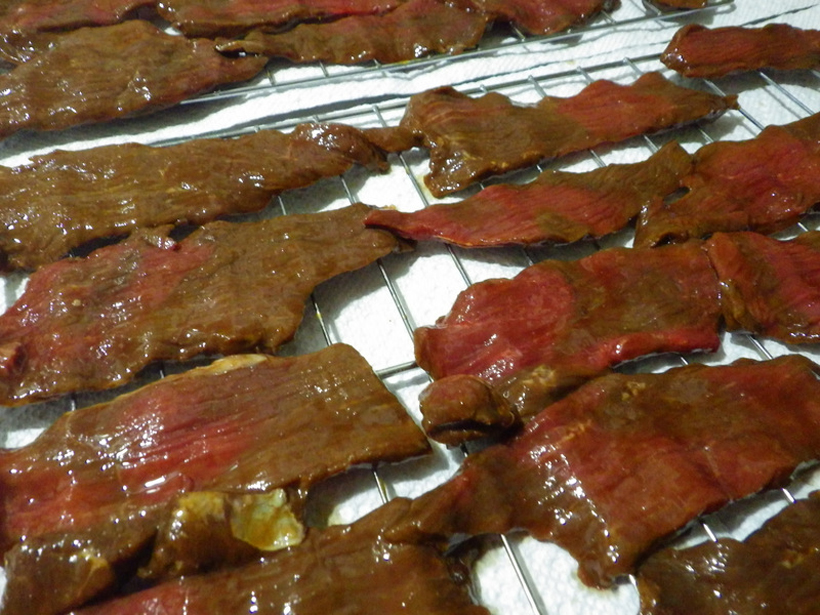 Just because he is a trophy animal does not mean he won’t taste good. He did not disappoint, and I even tried a new jerky recipe from the round steaks. It turned out terrific. You can find the recipe here.

Thanks for taking the time to put all this together. My start in hunting began in 1971 when I harvested a Pope & young buck with a recurve. I still have a vivid image of the shot and watching his hindquarters stagger as he disappeared from sight. This was the first deer I harvested with a bow and I was hooked, not missing a season since. Your story brings back much of the progression I experienced while learning the art of the hunt. Thanks for that.