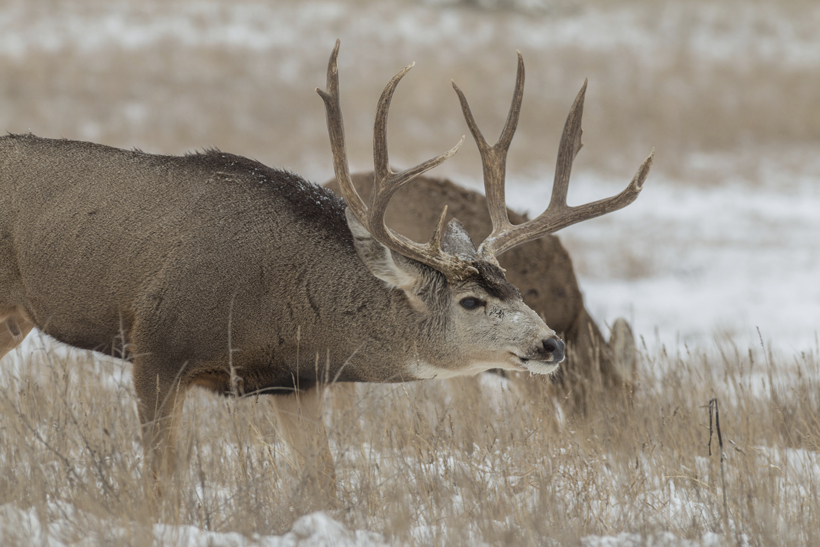 In “Moonstruck,” a 1987 comedy starring Nicholas Cage and Cher, a female character rejects a guy with the line “what you don’t know about women is a lot.” I suspect the same statement is true in regard to the many hunter’s knowledge of the mule deer rut.

Superficially, mule deer seem to behave like elk during the breeding season. Doe herds are usually accompanied by a buck, leading many hunters to believe the stag tends a harem and then mates with the does as they become receptive. That’s not the case at all. Mule deer bucks do not remain attached to a particular herd of does for the duration of the rut. They simply visit the herd when a doe (or does) is coming into estrus, but will abandon the group in the absence of receptive females. A bruiser buck may be observed with the same doe herd for an extended period of time. This occurs when multiple females sequentially become ready for breeding. Otherwise, muley bucks often exhibit a “here today, gone tomorrow” pattern of behavior in relation to doe herds during the rut.

Another aspect of the mule deer rut to consider is its timing and duration, and the manner in which latitude influences the breeding season. As a general rule, the rut is shorter and more intense in northern climates than southern regions. This occurs because the ill-timed birth of a fawn, either too early or too late in the year, greatly reduces its chances of survival in the likes of Idaho and Montana. Conversely, mule deer in southern locations such as Texas and Arizona may see fawns birthed over a period of several months, versus several weeks in the north. 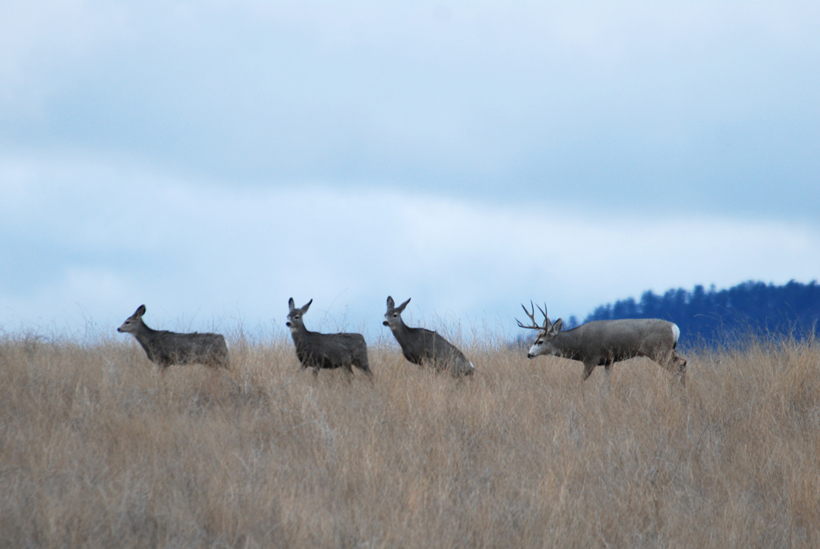 An extensive research project with mule deer in eastern Montana found that 75% of the does that successfully mated became pregnant between November 21 and December 1, essentially a 10-day period. Southern mule deer may begin mating in November, increase their breeding activity until mid-December, then see reproductive behaviors taper off sometime in January.

Some point to falling temperatures as the mechanism that incites the mule deer rut, but research has shown that photo-period, the amount of daylight in a 24-hour period, is the primary instigator of the breeding season. How is it, then, that hunters observe less activity among bucks during warm weather than when it’s colder?

The answer to this question lies in comfort. By the time the rut rolls around, a big buck in the Wyoming Range is carrying its full winter coat. Imagine yourself pedaling an indoor stationary exercise bike in cold-weather hunting gear and you’ve probably estimated the sensations experienced by a muley on the jog during hot weather in search of does. Come fall, actively moving deer find temperatures in the 20 to 35 degree range much to their liking. Hot temperatures do not suppress the hormonal and seasonal triggers of the rut, they merely create environmental conditions unfavorable to physical activity among mule deer.

Hunters in the northern Rocky Mountains will find no better time to hunt mule deer during the rut than the 10-day span ending on the weekend after Thanksgiving. In my home state, Montana, this period conveniently coincides with the last 10 days of the rifle season in most hunting districts. 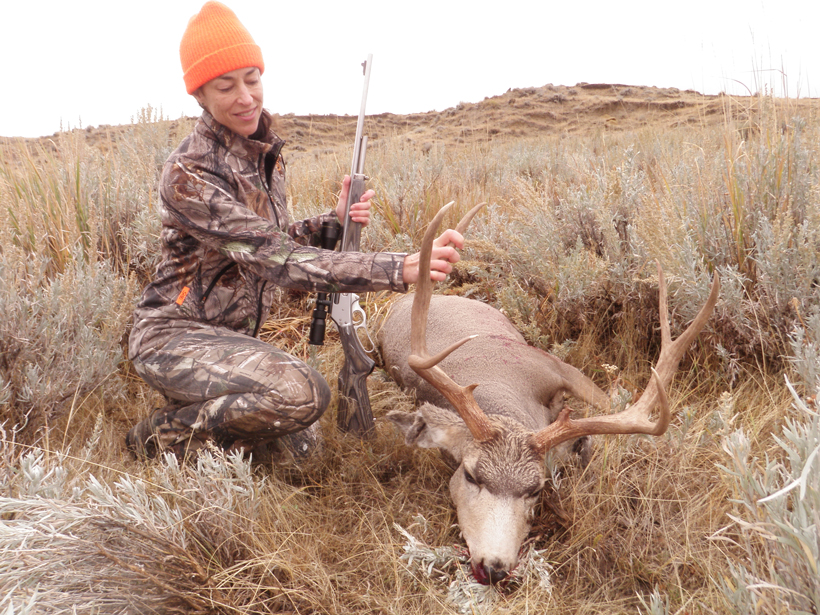 There are several advantages associated with this seasonal window. First, it occurs at or very near the peak of the actual breeding season in most locations. This means hunters enjoy the highest odds of discovering bucks with does, and a herd of does is generally easier to find than a solitary buck. However, this does not imply that a single doe will not capture the attention of a male. A giant muley with a girthy, snarled rack is more delighted to keep company with a single doe coming into heat than a herd of honeys that have already bred or have yet to experience estrus.

Hunting the season of greatest breeding activity yields another advantage for hunters. Normally skittish, aged stags are much more vulnerable at this time, a principle underscored by the fact that hunting districts in many Western states close their rifle seasons around or before November 10 in an effort to protect vulnerable bucks. I once spotted a massive muley in the Missouri Breaks of Montana just before Thanksgiving at a distance of about a half-mile. 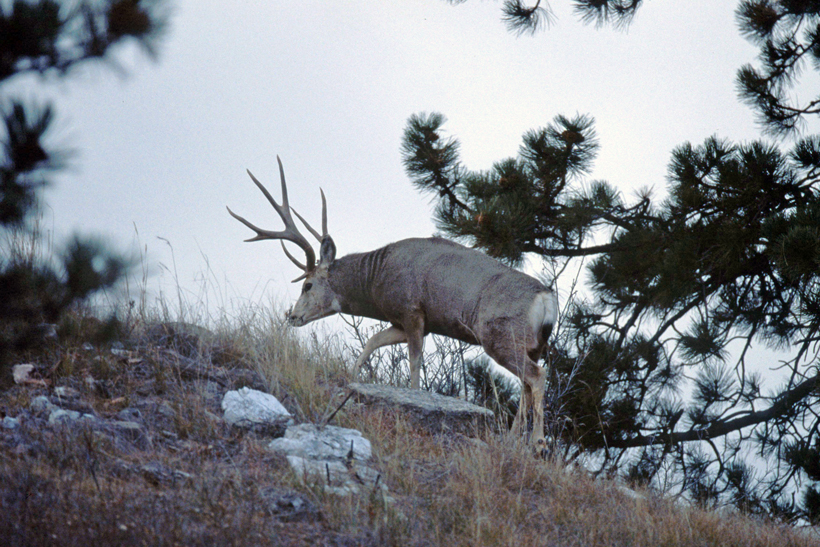 The bruiser was with a trio of does who had spotted my parked vehicle and were eyeing it with curiosity, but not alarm. The buck, however, was clearly nervous and broke from the herd. It paused to look back at the does, then minced back in their direction before snapping its head around to check my position. Finally, its survival instincts won the day, and the old boy abandoned its love-interests. Had I been within shooting range, its indecision may have been fatal. Earlier in the season, it’s doubtful the stag would have stuck around for two seconds.

The final variable commending this time period to rut hunters is weather. Warm, activity-suppressing temperatures are less likely to occur in late-November than before. As an additional bonus, hunters have a greater chance of hunting with snow cover, a condition that promotes spotting deer and affords the luxury of tracking animals. 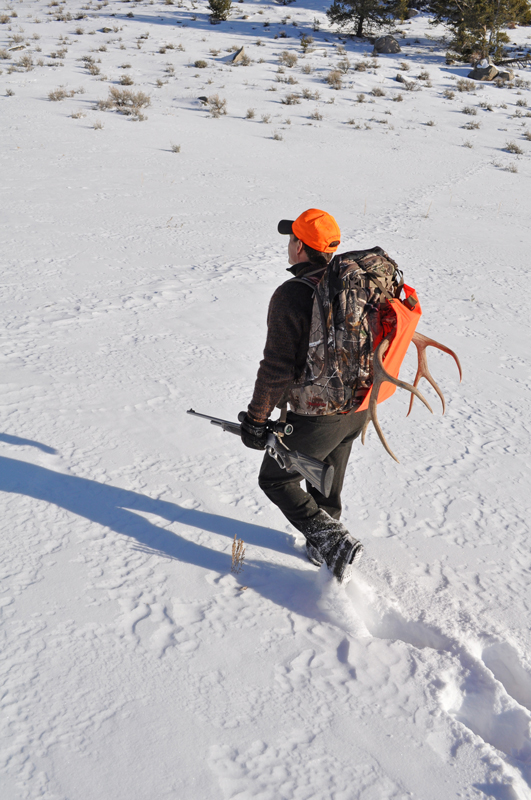 Southern mule deer hunters have a less predictable schedule of peak rutting activity. In such locations, check with local biologists to determine the timing of maximum breeding behavior. That may reveal the best time to hunt. Diehard whitetail hunters sometimes heatedly debate whether the rut, or the pre-rut, is the prime period for hunting. For mule deer, the 10 days spanning the peak of the breeding season consistently offers hunters a golden opportunity for bagging an outsized buck.