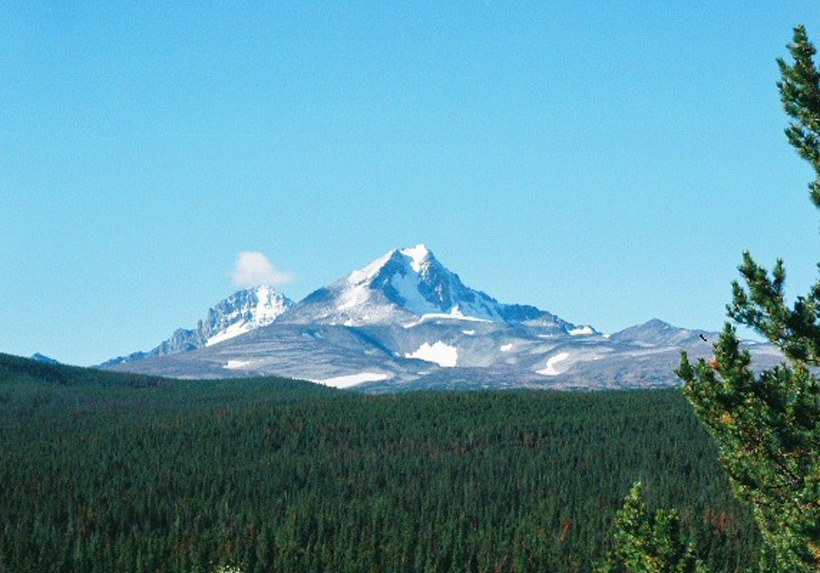 The idea for this hunt actually began during the fall of 1999 after an aborted mountain goat hunt near Revelstoke, British Columbia. Sometimes weather conditions and other issues take a hunt away from the hunter. 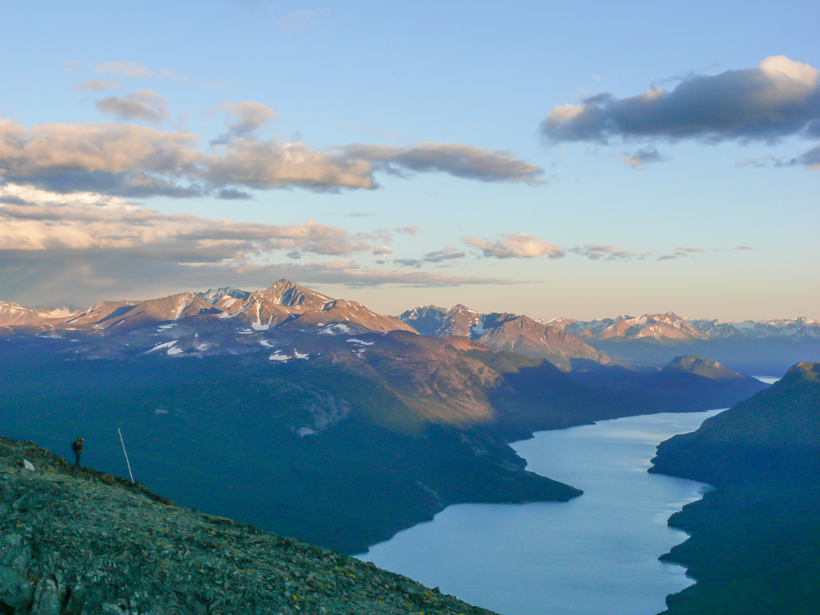 My disappointment was replaced by the promise of another hunt, on another day and a desire to challenge the mountains once again for a quarry worth everything I had to give. I was lucky enough to have the opportunity to hunt once again in terrain that can easily beat a man before he even tries to scale the lofty peaks that mountain goats call home.

At the age of 61, I decided that it was time to commit to my goat hunt since I was not getting any younger. This thought occurred to me as I was at about 9,000 feet in Western Colorado carrying the last quarter of my 2007 bull elk to my truck. I stopped to look around at the surrounding peaks and decided to book a goat hunt for 2008. 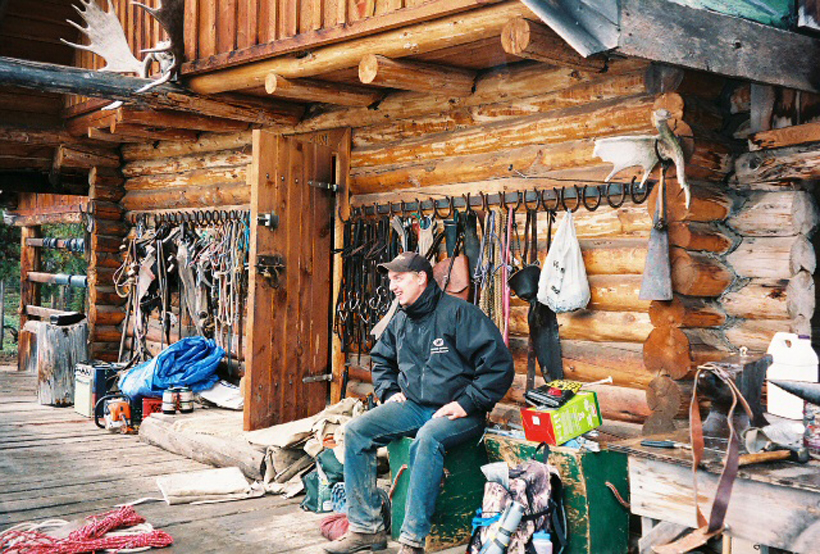 In early 2008, a friend told me about Mike Hawkridge of Tatlow Mountain Outfitters. When I contacted him, Mike was soft spoken and carefully listened to how I answered his questions: Can you climb? Can you ride? Can you shoot? Are you mentally ready for a tough hunt? I answered yes to everything he asked. 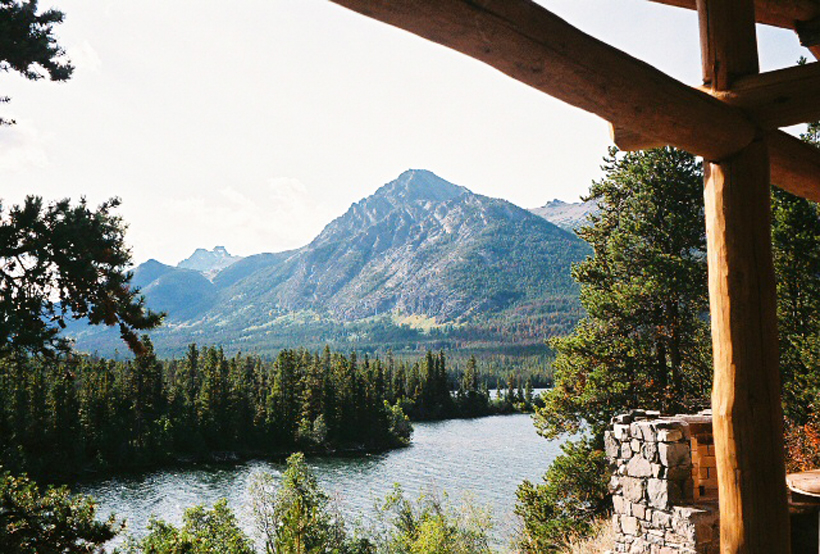 When the hunt arrived, I could hardly believe that it was finally here. My flights and customs clearing were seamless and without incident. When I arrived at the location, Mike appeared, extending his hand and welcoming me to British Columbia and Tatlow Mountain Outfitters.

We traveled for about five hours until we rolled into beautiful Tuzcha Lake and my cabin at Yohetta Wilderness Lodge. Gwen, our lodge chef, made sure we never went hungry and her Jack Russell kept the mice at bay. 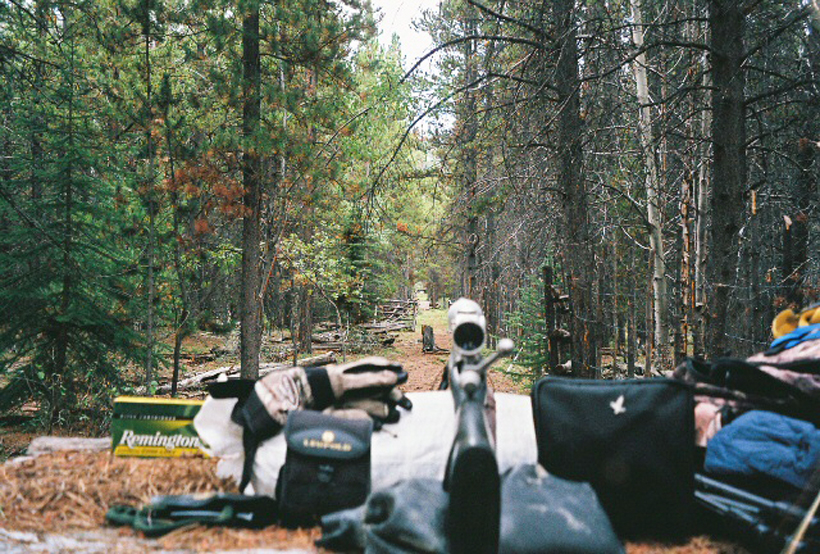 One of the first things we did was head to the range to sight in my favorite rifle, a .30-06 named “The Rock.” At the end of the shooting session I knew that I could put three shots 3.5” high inside of 1” at 100 yards. 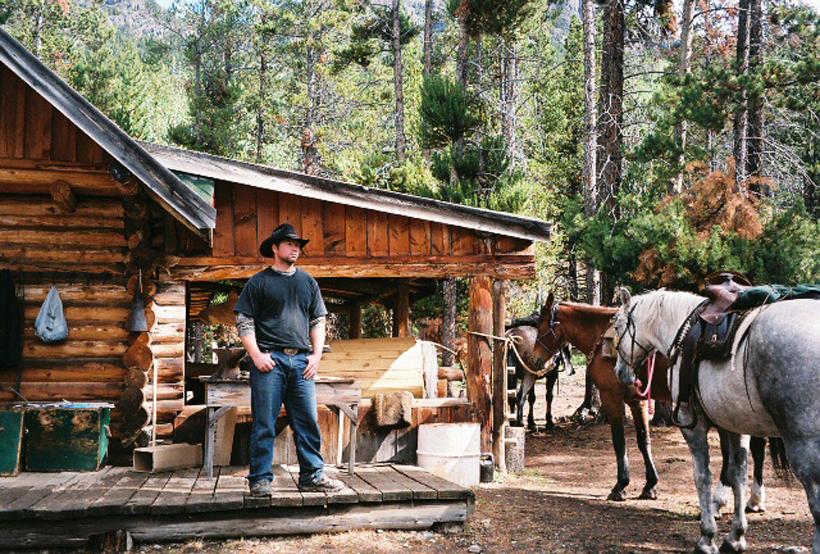 Sunday was busy with preparations to leave for camp. Tom, my guide, packed the panniers. Wranglers Nicole and Donny rigged the horses. Alice, the camp cook, and Lobo, our camp dog, prepared the necessary food and kitchen supplies so we could head out to camp on time. 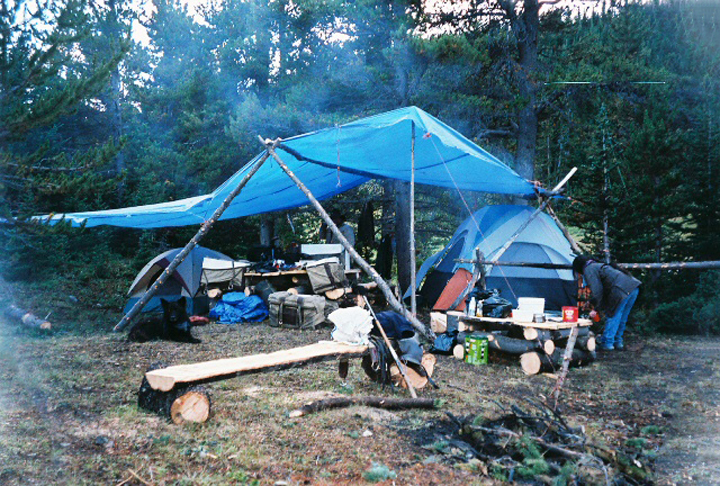 My guide Tom knew these mountains like his own backyard. He grew up here and has explored every nook and cranny from the back of his horse. Here is where Tom got his nickname “Three Basin Tom.” 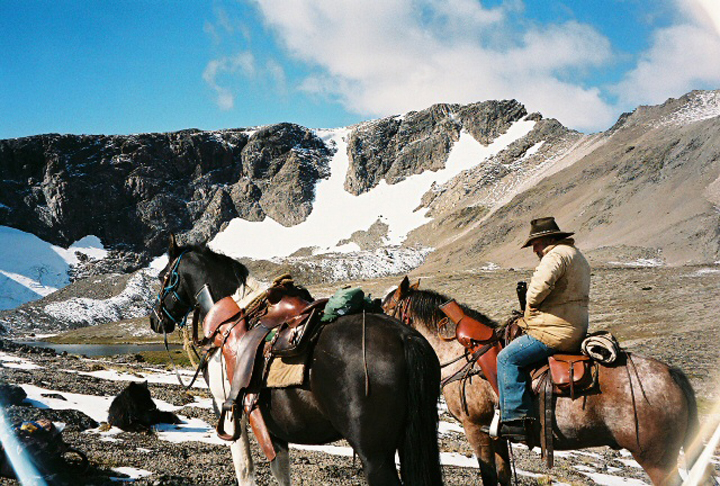 As we rode along, Tom looked up the side of the mountain and said we needed to check out the next basin from the top of it. The way up was a 500’ near vertical climb in shale with us leading our horses. “Just follow me,” Tom said. “Keep Rhino [my horse that day] below you and just walk slowly.” 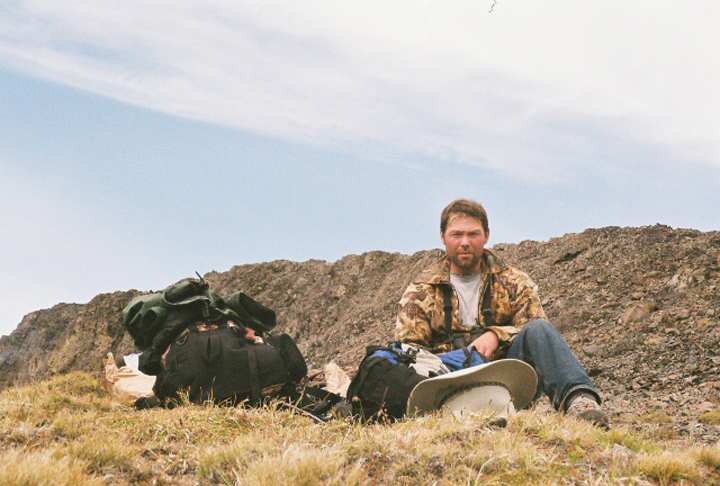 Tuesday came with a new skiff of snow on the mountain slopes above camp. Mike had arrived at camp the evening before and replaced Tom as my guide. We saddled up for the ascent to timberline. He and I rode even higher than the day before to get into a different drainage. 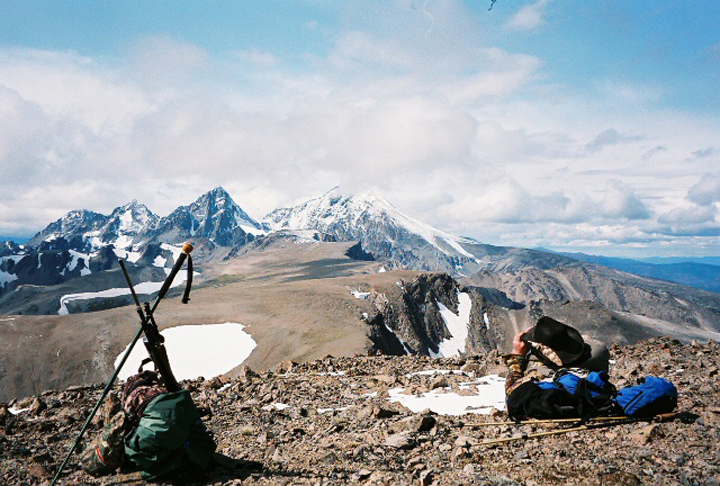 We reached our glassing location and peered into numerous basins without a sighting. We decided to take a break and eat a late lunch so we hiked back to our horses and rode back to camp. 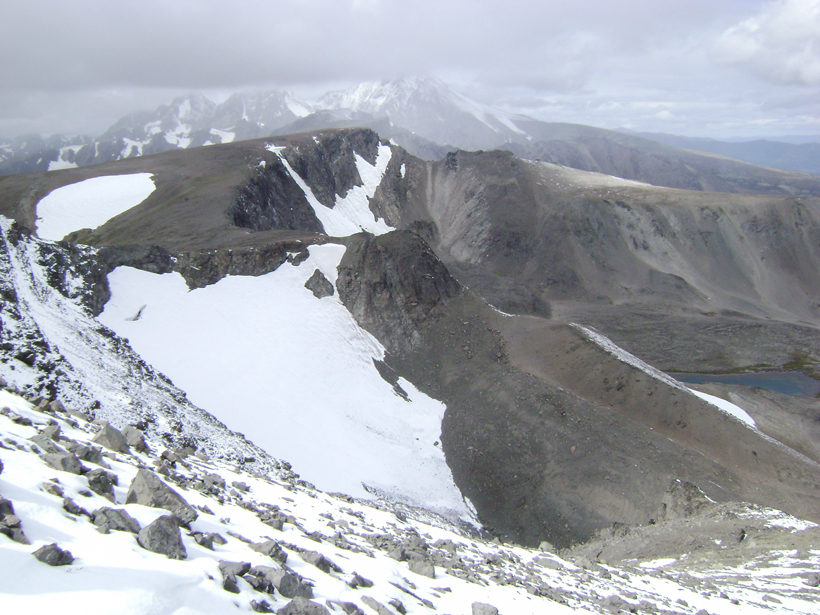 On Wednesday, we broke camp and headed back to the lodge to regroup and head to another area. It was about a two-hour drive to the point where we left the truck followed by another ninety minute climb to get to the alpine basin Mike had in mind to glass for the afternoon hunt. 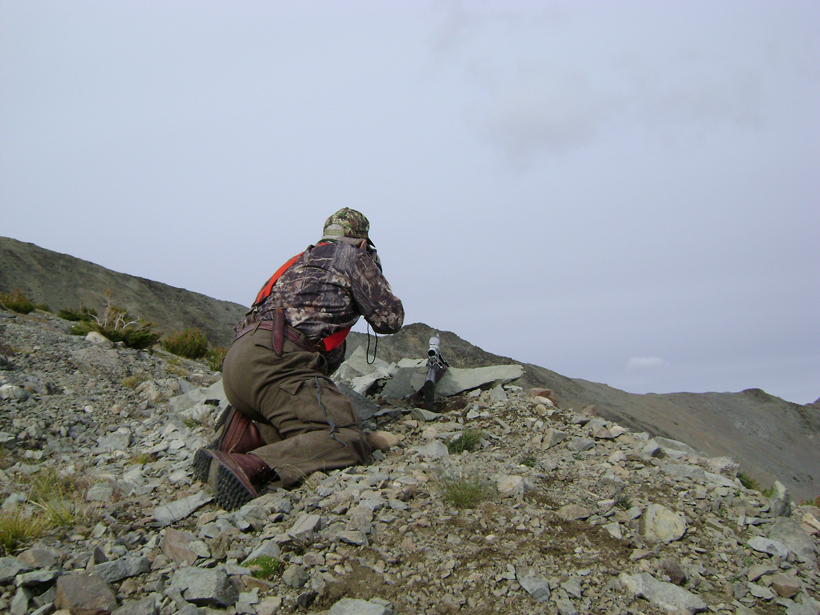 This time, it did not take him long to locate three mountain goats. Once he did, things got very interesting. While we were level with the mountain goats by about 400 yards, we were still across the basin from them. Mike asked if I wanted to try for the farthest mountain goat on the left. So I set up and took the shot and it hit home. We watched the billy struggle to his feet and move up and over a ridge. 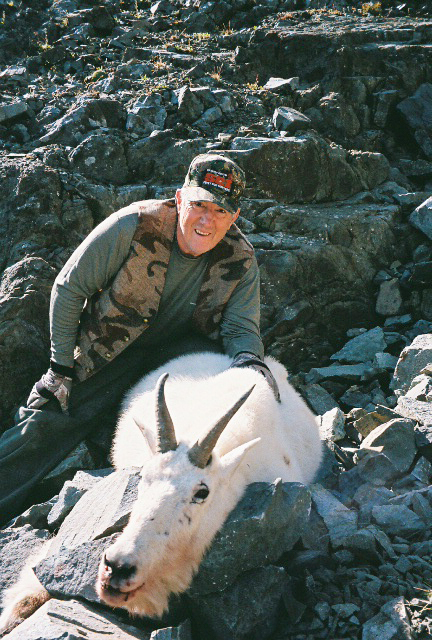 Mike and I gathered our gear and headed up to gain altitude before crossing the half-mile wide basin. The billy had slipped over a sharp ridge at the head of a very steep chute. I slowly crawled into position and “The Rock” boomed sending the billy off the ledge, coming to rest about 275 yards below. 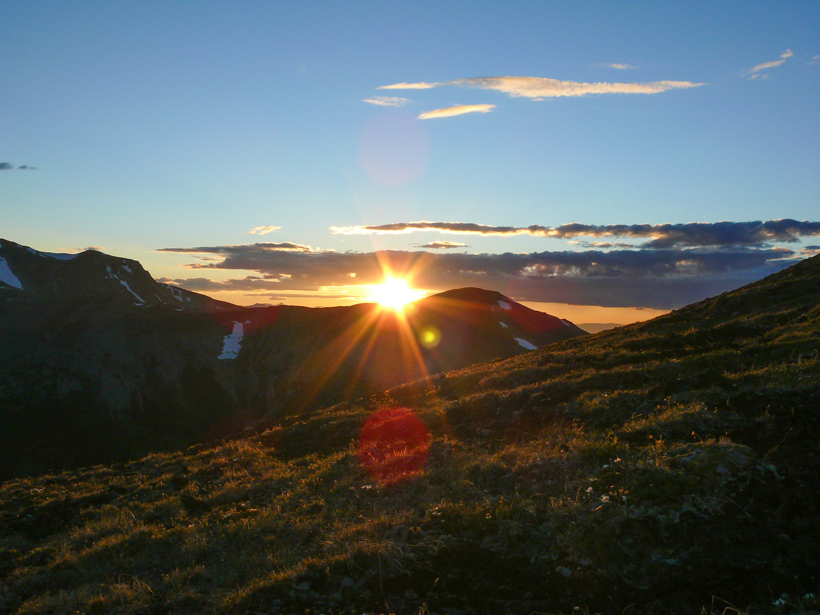 The trophy billy, guide and myself headed to the lodge with a true wilderness experience forever etched in my memory. Thanks Karen and Mike for a fantastic hunt.