You do everything you can do to avoid it — maybe by refusing to take excessively long shots, or using a rest — but it happens. Wounding is a fact of hunting,  and if you’ve hunted long enough you’ve been in a situation where you had to track a wounded animal, sometimes a surprising distance.

Here are 10 guidelines to tracking a wounded animal, to help you through the experience.

1. Mark the spot
Novice hunters are often so excited upon taking a shot that they forget where the animal was standing, or they assume that they can easily find it as they rush forward to claim their animal. Fortunately, there is a habit you can create that will help you remember. As you get ready to take your shot, quickly scan the animal’s immediate surroundings to note the exact spot.

2. Reload and go for No. 2
It doesn’t matter what weapon you’re using — it’s good practice all around to place a second shot whenever possible in case the first one wasn’t ideal. If an animal falls instantly, you might have clipped the spine or hit an antler, which means it can recover its senses in an instant and be gone forever. Some guides advise hunters to place a second shot through the lungs anytime an animal collapses on a first shot.

In archery hunting,  the opportunity for follow-up shots is less common but does sometimes present itself, especially if the animal has no clue where you are. A sharp arrow can inflict such little pain that sometimes a deer will immediately go back to feeding or a rutting elk back into fighting mode. Bowhunters often bugle elk that have been hit for a second shot. To avoid detection, don’t move quickly as you reload.

3. Sketch (or photograph) the site
Using notepad and pencil, draw the place where your quarry was standing when you shot. Include details such as rocks, unusually shaped trees and other landmarks that you might be able to recognize after moving. Or, if your phone or camera is handy,  take a digital picture, taking care to center in the frame the spot you want to remember. This is especially helpful if you have to cross a canyon or large  arroyo to recover your game and find yourself disoriented from a different viewpoint. It’s easy to get confused and never end up on the right trail, thus losing your animal. 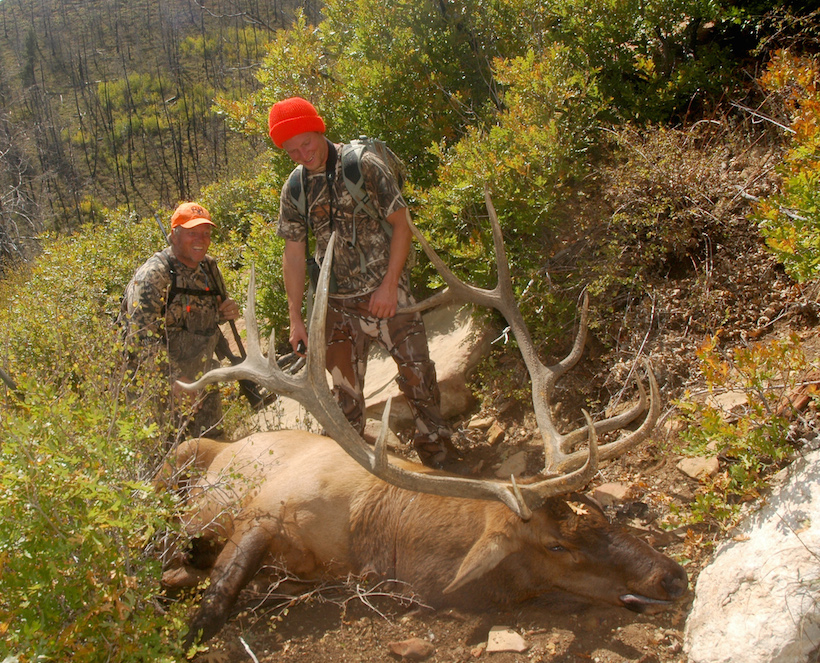 © Rich LaRocco, goHUNT.com
Kelly Beckstrom, pictured here with his son Kyle, shot this elk across a canyon. He tried to mark the spot but shot from a timbered area with a limited view of terrain. After they crossed the canyon, reference to landmarks helped them find the bull.

4. Wait it out — at least an hour
A well-shot animal might run 300 or more yards before succumbing. Assume a poorly placed shot, meaning you should wait before following the trail. Sit tight for at least an hour (or as many as twelve hours) before trailing an animal if you’re unsure about the quality of the shot.  Many hunters have been very successful at retrieving animals after poor shots by waiting through the night. Giving an animal plenty of time to expire is the safest thing to do. If you rush the approach, you might spook the animal causing it to get a surge of adrenaline and the animal may run many miles, making your chance of locating the animal very slim. Of course, there might be other factors, like falling snow, that require you to follow up faster.

5. Get a little help from your friends
A group of four or five trackers can make quick work of a trailing job that might take an individual hours. Some hunters are simply better at noticing sign. When animals veer off course, a team can find the trail again faster than an individual can. Each member of the team should take care to avoid obliterating sign, though.

© Rich LaRocco, goHUNT.com
CJ Park got help to track this Kansas whitetail that he got during the Kansas bow season. A team of trackers made short work of finding the animal.

6. Mark sign with TP, tape… or go the natural route
Attach a square of toilet paper or surveyor’s tape at each bit of sign. A GPS can help, but remember that batteries can die. In the absence of any of these materials, break the tips of branches or blaze saplings with a knife blade.

7. Send an advance scout
While the rest of the tracking team is tediously following the trail step by step, a scout can rove ahead and often find an animal quickly.

8. Set up a grid and search square by square
If you lose the trail because the animal is not bleeding or leaving tracks, copy the tactics of search and rescue teams looking for survivors from a downed airplane. They make a grid system and then thoroughly search each square. Mark the corners of squares, which should be small enough that searchers can be confident the animal is not in each square before expanding the search. You’d be surprised at how many hunters have never learned to do this, and it can be extremely effective. 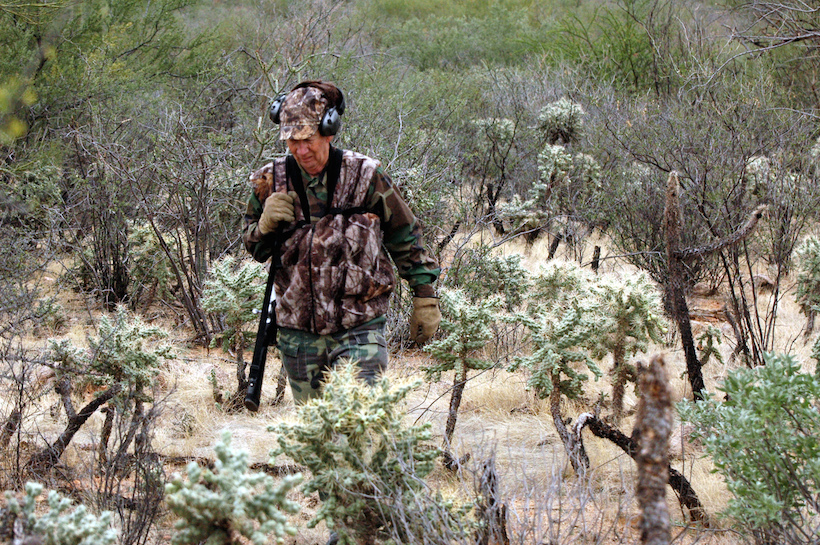 © Rich LaRocco, goHUNT.com
Michigan hunter Bill Hall tracking on a trip in Sonora, Mexico, where sand allowed him to follow quickly. Even in the desert, however, a trail can be lost on a rock crossing. In this situation, a grid system works well.

9. View from a different angle
Get a big picture. In open terrain, cross a canyon and thoroughly glass with tripod-mounted binoculars. In some cases, you can think ahead and start looking where you expect the animal to be, such as in a thicket, and track backward from there.

10. Don’t give up, no matter what
A bowhunter who harvested an elk that once held the No. 1 spot in the Pope and Young Club’s records was said to have tracked his bull more than 20 miles. So don’t get discouraged! It can be hard work to recover your game, but these techniques will help ease the process.