What bow cam is the perfect choice? 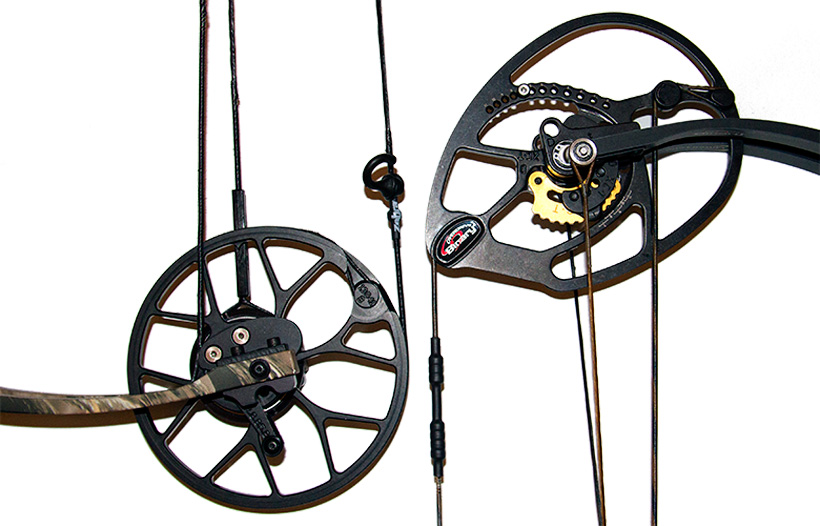 Every compound bow is comprised of a riser, string, cable system and cams. The bow’s cams manipulate the draw weight during the course of drawing and releasing an arrow. The shape of the cam can affect how easy or difficult the bow is to draw as well as how much energy the bow can store and then release when shot. While there are several shapes of cams in the bow market today, this guide will contrast the two ends of the spectrum: round cams and hard cams by comparing the Mathews NOCAM HTR with the Bowtech Prodigy.

The round cam or NOCAM 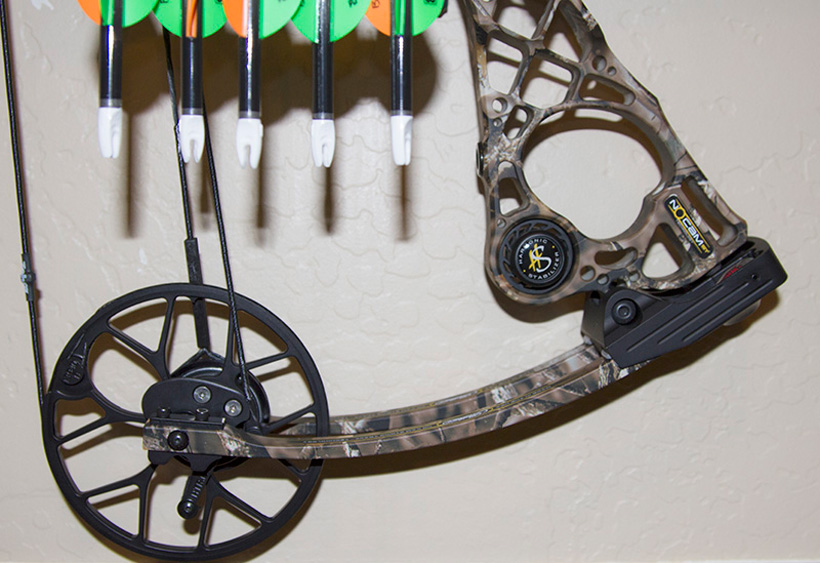 The advent of the compound bow began with all bows having two round cams. In the mid-80s, bow manufacturers began making egg-shaped cams, which helped increase speed. Today, most of the hunting bow industry has moved into some shaped-cam designed to store more energy in order to make the arrow release faster in the process. However, in 2015, Mathews released a round cam bow built on their NO CAM ST™ Technology. Unlike early round cams, the NOCAM “utilizes two circular and concentric string tracks, allowing the string to travel at a constant distance from the center of rotation during the shot cycle,” which increases efficiency and speed.

Cams aside, the NOCAM feels a little bigger than its 32” axle to axle measurement might suggest. This is due to its long riser and short quad limbs combined with its less than 7” brace height. The bow balances a little top heavy until the accessories are added, which makes the bow balance well and feel good in the hand, especially with a longer stabilizer. I added the following accessories for the field test of the NOCAM HTR. 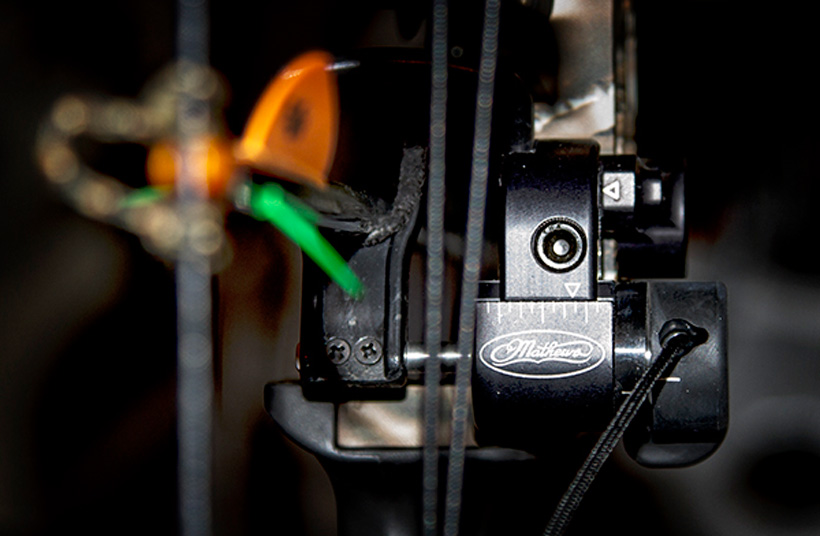 To put the NOCAM HTR to the test, I shot several arrows at different weights to test bow performance with a specific emphasis on speed.

Without a doubt, the NOCAM HTR is the smoothest bow that I have ever drawn. Since my archery career began in the early 80s, I have shot several round cam bows. The NOCAM technology is unique, and the moving parts give it a different feel than round cam bows from the past. Specifically, the back wall is more defined on the NOCAM than any other round cam bow I have shot. I prefer a more defined back wall because I believe it increases accuracy since it emphasizes back (and shoulder) tension at full draw. In short, it makes it less likely for the shooter to creep, which hinders accuracy. Although this bow is not the fastest on the market, it still produces 52.92 KE (kenetic energy) and 0.38 M (momentum) with the lightest arrow tested (300 grains), which is plenty for most North American game animals. At 70 lb and a 30” draw the NOCAM HTR shoots plenty fast—up to 330 fps (feet per second) — especially considering its smooth draw.

A little more from Mathews

“The NO CAM ST™ Technology put every other component into question when designing the new NO CAM™ HTR. The result is a truly integrated system featuring shorter, more rigid quad limbs, a less reflexed riser, twin Harmonic Stabilizers™ and our popular Focus Grip™. RockMods™ come standard on the NO CAM™ HTR and are available in 65%, 75% and 85% let-off. Choose between five exclusive -finishes, including the new Stone Tactical and Lost Camo® OT.”

For more information on the Mathews NOCAM HTR, visit their website. 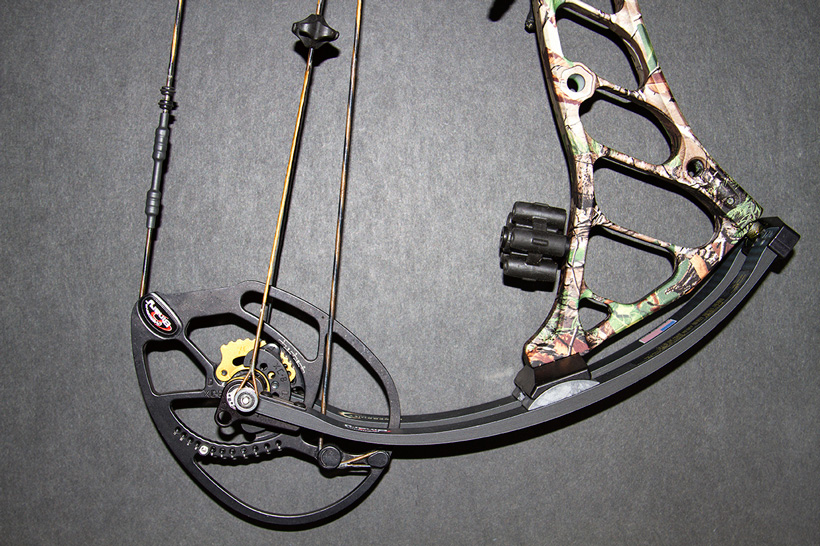 Once the advent of shaped-cams occurred in the mid-80s, the bow industry changed drastically. Since that time, bow manufacturers have tried several variations of cams. The evolution produced the “speed bow,” making it the norm for bows to shoot over 300 fps IBO. The IBO speed is as a standard measurement by the International Bowhunters Association and uses a bow that has a maximum draw weight of 70 lbs., the arrow will weigh 350 grains (5 grains of arrow weight per pound of bow weight) and the draw length will be set at 30 inches. Eventually, speed bows evolved and can now release an arrow as fast as 350 fps. The majority of bows that shoot over 330 fps are hard cam bows. Bowtech manufacturers several hard cam bows, including its new Prodigy. The Prodigy also features Bowtech’s PowerShift technology, making it possible to adjust the draw cycle and energy curve of the bow. In other words, you can draw it like a speed bow and enjoy about 340 fps, set it up as an average bow or set it up to draw easily, but lose some of the speed and performance. 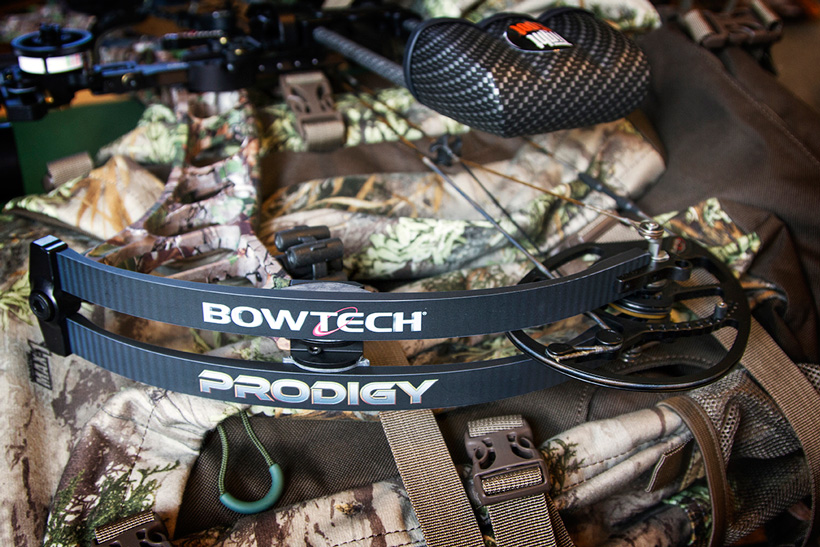 As soon as I fired the first shot from the Prodigy, I knew it was faster than any bow that I have ever owned. The Prodigy is a speed bow with a relatively hard cam, but it also has a 7” brace height making it a little more forgiving. Although it would be difficult to guess what performance setting the bow is set to by drawing the bow one time, after shooting several shots, it does become a little easier to tell what setting has been applied. The Prodigy’s shape lends itself to easy maneuverability. I added the following accessories for the field test of the Prodigy. 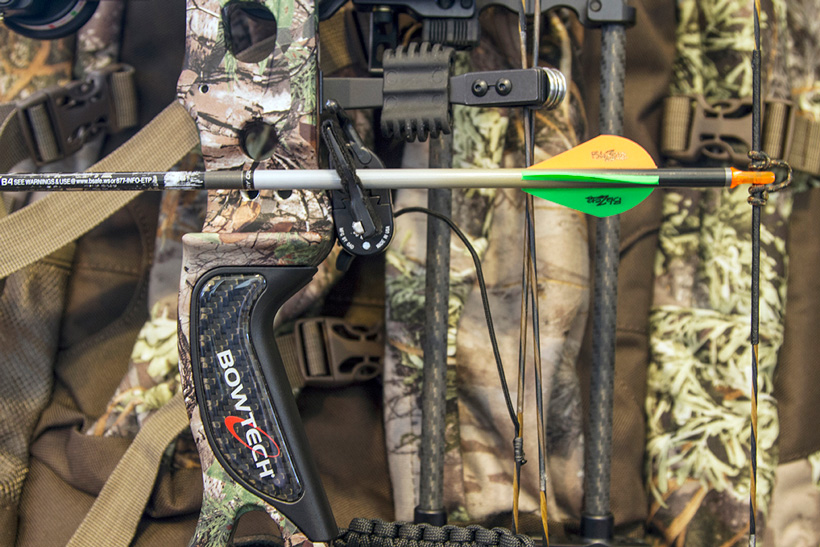 To put the Prodigy to the test, I shot several arrows at different weights to test bow performance, specifically focusing on speed.

The Prodigy is a great all-around bow. It is perfect for both the smaller-framed bowhunter looking for a boost in performance or the average guy looking to take full advantage of all of its speed and performance. With the right set up, this bow will shoot over 300 fps with a 27” draw length and under 60 lb or push an arrow at 340 fps with a 30” draw, near 70 lb. Choose the perfect arrow—the Easton Hexx, for example—and even the smallest of archers will be able to push an arrow with plenty of kinetic energy and momentum to take any North American game animal.

A little more from Bowtech

“It’s time to shift your thinking. The aptly named Prodigy marks the beginning of a new era with the introduction of PowerShift Technology. The new PowerShift Technology delivers versatility unmatched by any compound bow on the market. With a simple shift of the PowerDisc, any archer can customize their shooting experience from the Performance setting, to the Classic setting, or the Comfort setting. Archers can have speed, power a smooth draw or an effortless draw all in one truly revolutionary compound bow. The Prodigy not only features the game changing PowerShift Technology, but is also outfitted with Bowtech’s award winning OverDrive Binary Cams for impeccable tuning and consistency, Center Pivot Extreme for unmatched accuracy and speed and FLX-Guard to eliminate riser torque. With the Prodigy, get all the bows you want with zero compromise.”

For more information on the Bowtech Prodigy, visit their website.

Tips to remember when purchasing any bow

When selecting a bow to purchase, I suggest making an appointment at your local archery pro shop and checking out this article for more information. Shoot several bows with several cam designs. Ask as many questions as you can about the speed and performance specifications of the bows. Most importantly, let them know what you are looking for in a bow and how you will be using it in the field. Of course, in my opinion, you cannot go wrong with either the Mathew’s NOCAM HTR or Bowtech Prodigy.