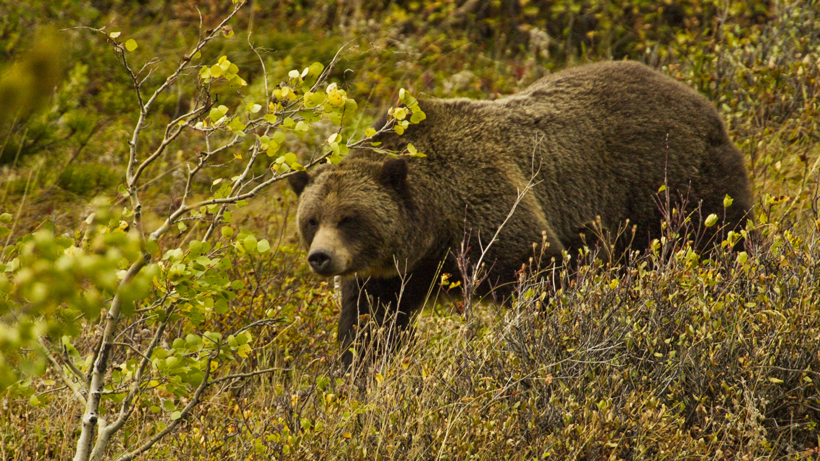 Grizzly bears were listed on the threatened species list in 1975, but, in today’s world, there are thousands of grizzlies living in the lower 48. Yet, there are only sizeable populations in three states. Wyoming, Montana, and Idaho have grizzly bears with numbers growing year by year as they thrive in this ecosystem without any natural predators. Grizzly bears affect the deer and elk population, our hunting location choices and our backcountry experience in a lot of different ways. Here is a breakdown of how these bears affect hunting and what changes you might have to make the next time you consider hunting in grizzly country.

Before diving into the effects grizzly bears have on hunting, let’s talk briefly about their biology and behavior. Grizzly bears are a brown bear that inhabits North America from Alaska to Wyoming. They can weigh up to 700 lbs and eat rodents, insects, elk calves, fawns, livestock, trout, grasses and anything that might cross their path. Grizzly bears can run up to 40 mph and have a home range as extensive as 2,000 square miles. For a size comparison, grizzly bears are typically up to two times larger than a black bear. Grizzly bears are a true apex predator that seems to fear nothing.

In general, a grizzly bear will not take down a healthy adult elk, deer or other similar-sized animals. Adult animals are wary of grizzly bears enough to keep their distance and they can run just as fast — if not faster — than a bear. However, it is essential to note that grizzly bears do have a negative effect on ungulate populations. Grizzly bears prey on the calf and fawn population in the spring of every year. It is a typical sight to see bears following around a herd of elk, waiting for them to have their babies so they can eat the afterbirth as well as the newborn baby. This is a natural process; however, it can affect animal populations, especially as the grizzly bear numbers continue to grow.

When it comes to selecting an elk or deer hunt in Montana, Wyoming or Idaho, the number one concern from many hunters is grizzly bears. Some hunters refuse to even hunt in an area with grizzly bears out of fear for their lives. Though bear attacks do happen, they are not that common. And they can be gruesome when they occur. I understand why some hunters would not want to hunt in grizzly territory; however, that means that there is less competition there, which is why I still hunt in these areas. Most hunters need to decide if they are willing to hunt in grizzly country or not. If the answer is no, then that is fine, but you have a few more things to consider and understand if the answer is yes.

When hunting in grizzly country, I always make sure I pay a little extra attention to what I am doing. For example, when I am calling, I always make sure that I am ready for an elk to come in while simultaneously on the lookout for a bear. It is better to be over-prepared than underprepared in that situation. On the same note, when I am stalking, I am always trying my best to be quiet and slow, but I also am on the lookout for an unsuspecting bear. The last thing you want is to startle a mother bear with cubs or an aggressive boar.

When camping in the backcountry, it is always important to distance yourself from aromas, meat, food and even pots and pans. Bears have excellent noses and will come in to investigate new scents. I would prefer they investigate my camping supplies hung in a tree 100 yards away instead of exploring my tent. Carrying a firearm and bear spray is also essential and it is important to take to your tent with you.

When thinking about grizzly bears, I am impressed with their abilities. After all, they are animals that can grow up to 700 lbs by eating the plants, animals and bugs that cross their paths. Then they hibernate for five to seven months a year only to do it all over again for up to 25 to 30 years. Though I am impressed, I also am fearfully respectful. Grizzly bears are dangerous predators that can really hurt you, so if you do not give them the respect they deserve, you can pay the price. This fall, understand how bears may affect your hunting and use your skills and know-how to be bear aware and kill an elk or deer in bear country.