Swarovski STX and Zeiss Harpia spotting scopes: how do they compare? 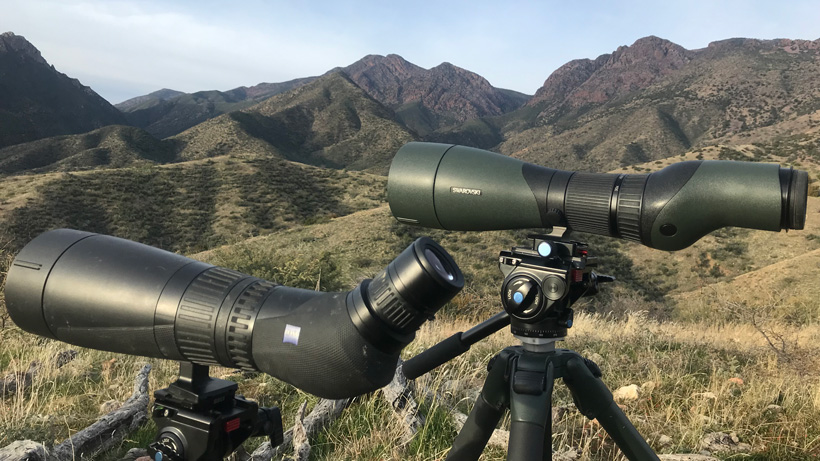 I decided to take out the biggest and best of the spotting scope world recently and put them to the test under real glassing situations in the field. I had previous experience with both on other outings, but had never completed a side by side comparison. To say that I was excited about that trip up the mountain was an understatement. My goal was to test thoroughly so that I could provide the best answers possible for all the questions I have been receiving. Like I tell everyone, “put your eyes behind them and let them tell you the truth” - it was time for me to put my eyes behind these long-distance optics and see how they compare.

From Swarovski, I brought the tried and true STX (straight) eyepiece paired with a modular 95mm objective lens. This combination has a magnification range of 30 to 70x.

From Zeiss, I brought the newer Harpia 95mm. With its angled (only) eyepiece, the magnification range is 23 to 70x.

Below you will find the technical specs from both Swarovski and Zeiss. I won’t really refer to them much because I want this comparison to be less about the numbers and more about my observations of what to expect when using them. I believe this will help you make a more informed decision on your purchase.

Here are some specs for basic comparisons: 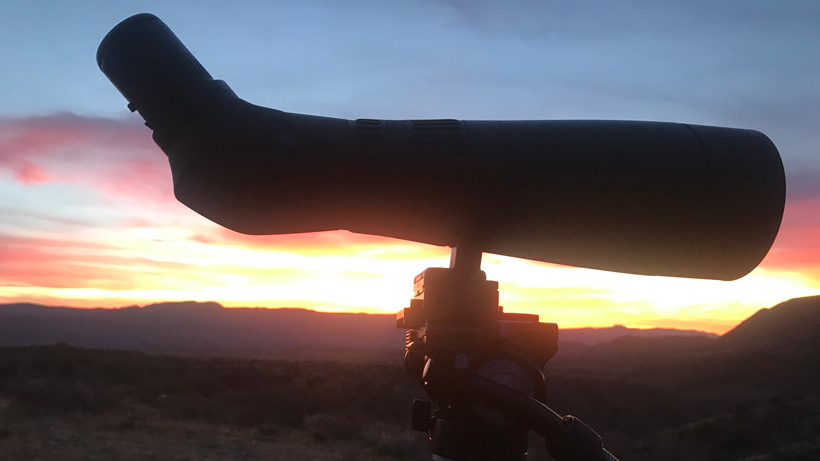 The morning I tested these out turned out to be perfect. Cold morning temperatures, a good sunrise and no wind make for excellent testing conditions in the mountains of central Arizona. In the dark, I mounted both pieces of glass to a couple of heavy, Manfrotto O55 tripods with Sirui Pan heads. Because I was using two tripods together, moving my head back and forth between the two spotters I chose to sit on a small lightweight stool. I have to admit that I was quite anxious for civil twilight to arrive so I could begin.

As I started to look around, the topography and vegetation started to take shape. My first task was to ensure that the spotters were focused and set at equal magnification settings. Since the Swarovski’s lowest magnification was 30, that is the baseline I used. More on that later. Once focused, it became obvious that comparing these two pieces of glass was going to be difficult. After all, these are two of the biggest and best pieces of glass in the industry!

At first, both spotting scopes were easy to focus. I played with the focus wheels on each to make sure they were precise. I think that the Zeiss was easier to get as close to perfectly focused as possible. I loved how the focus wheel was smooth in one direction and would get even lighter when turned back the other direction — like the older Zeiss with the micro/macro adjustment dials. The Swarovski was easier to focus crystal clear, but I really liked using the micro-adjustment on the Zeiss, especially throughout the whole power range and with multiple distances. 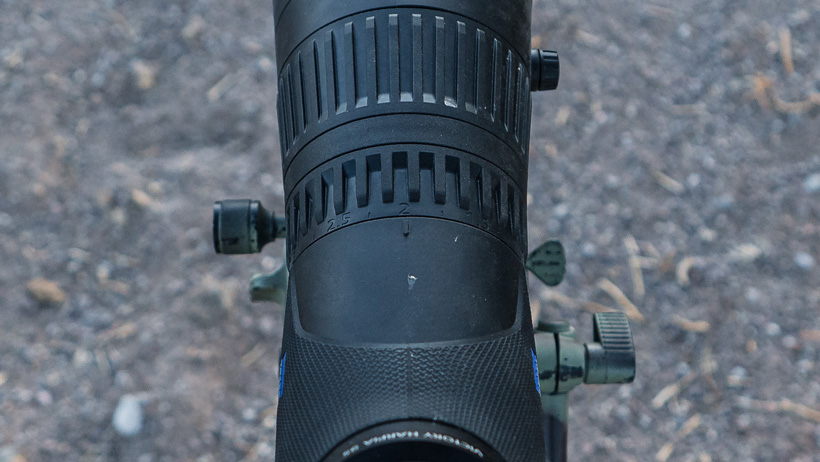 Focus and magnification on the Zeiss.

I spotted the first deer of the morning: a Coues deer doe with her fawn. That feeling of finding the first deer of the day never gets old. They were coming out of a saddle choked with mesquite leading onto a blonde slope. The distance was 1,700 yards. I was able to spend 30 to 40 minutes following their movements and, even, turned up a couple of smaller bucks that were hanging around. I found both of these spotters incredibly well-matched when it came to both the clarity and resolution in the dark and during the first rays of dawn. The deer appeared to be as clear in one as the other throughout the entire magnification range. However, I did notice a difference in the color. The Swarovski was throwing off a yellowish hue as opposed to the blueish hue from the Zeiss. Remember, though, that this can differ depending on whose eyes are looking through the glass. 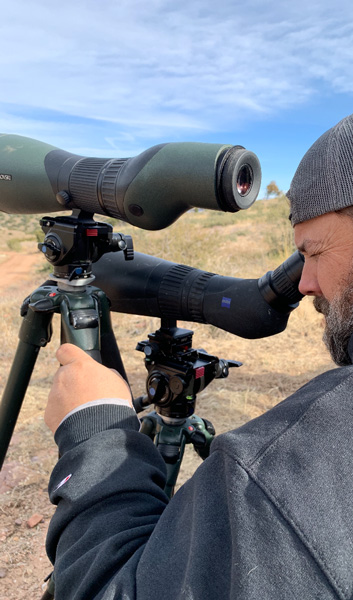 As the morning continued, I began to spot deer on different slopes and different distances. This would give me the chance to move around with the spotters a little bit. I found both spotters easy to scan with and follow game. I had a lot of experience with the STX/95 so I spent more time learning the Harpia. I felt I could move with the deer I was tracking with ease. There was a discernible difference that did make itself known, but only at the extreme angles. The Zeiss eyepiece had a little less forgiving eye box, meaning that you had to be more squarely behind the Harpia than the STX. Important, but not a deal killer.

Again, as the morning grew older and with the deer moving less by the minute I began looking at the entire field of view (FOV). I found the FOV to be flatter in the STX/95 and to be clearer to the edges. However, the slightly wider FOV negated the difference. The most important aspect of these two scopes was how well the centers allowed you to see every aspect of the dark shadows of a north slope to find a well-concealed buck. Or to verify the rings on a horn to age a mature ram. They both excel! 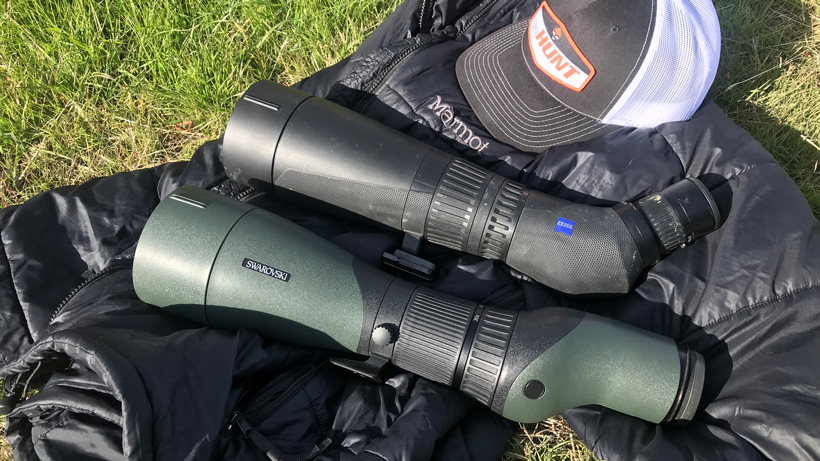 The Harpia has earned its spot at the big table for sure. Zeiss offers an 85mm version as well. The Harpia series is only available in an angled version. I hope that in the future we will have the option of a straight and a 65mm version. That would round out the choices for all situations. The STX is part of a modular system, which allows for just about any combination. Available is an angled ATX eyepiece, a dual-eyes BTX eyepiece along with 65, 85 and 95 mm objectives lenses.

I will leave you with two takeaways

1.) There are choices in the industry that will make you better at seeing your intended target.

I am positive both the Swarovski STX/95 and the Zeiss Harpia 95 will perform well and make you better in the field. If you like and will use the modular system for Swarovski to its fullest or want a Zeiss angled 95 with a great power range, either way, these spotters will not disappoint.