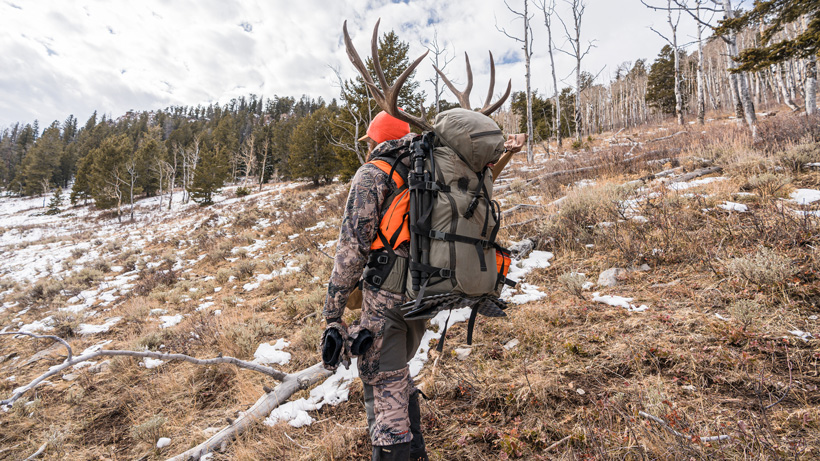 Stone Glacier started with the quest to build a pack that minimized pack weight while still maintaining durability and offering a load rate sufficient to comfortably handle the rigors of western big game hunting. My introduction into their packs began about six years ago when I began seeing and reading reviews of the original Krux frame and Solo pack. I did not purchase one at that point, but the specs of that pack definitely piqued my interest: 3 lb 11 oz and capable of carrying up to 130 lbs!

I bought my first Stone Glacier pack a few years later in 2017 at the Western Hunting Expo — an XCurve Frame and a 5900 bag. The XCurve frame was brand new for them that year and their second frame. After trying it on with 60 lbs of weight, I had to have one. I also bought an additional bag only option (7400), which is a key feature of the Stone Glacier system; you can switch the bags on your frame to suit your hunt style. I used that pack for the entire fall and, again, the following year. In fact, I’m still using the same frame and bags. Although they need a trip to the carwash, they are still in great load hauling shape.

With that, I wanted to do an article discussing the most common questions we receive about the Stone Glacier packs. What are the differences between the Krux EVO and the XCurve frames? When should you consider one over the other? 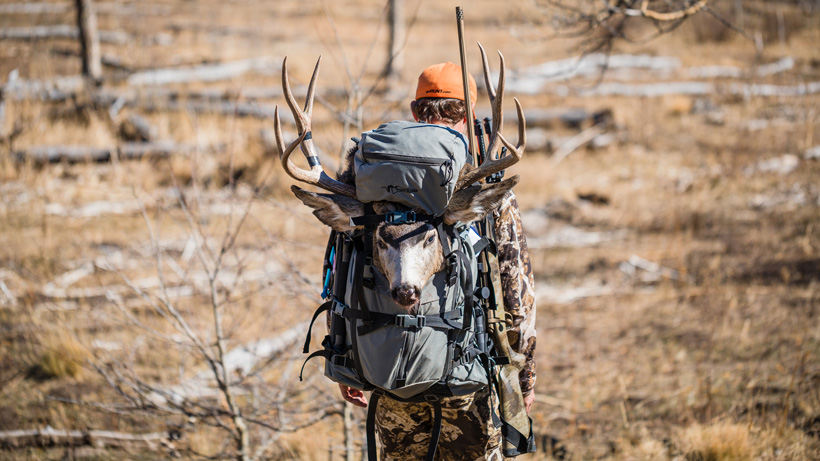 The XCurve is what I would refer to as the heavy duty workhorse of the two frames. I don’t mean to suggest that it’s heavy because it’s not actually all that heavy, coming in at 3 lb flat with a medium hip belt. The frame height is 26” and offers plenty of angle for your load lifters. The frame itself is composed of molded carbon fiber composite stays (new for 2019). The older model utilized round carbon fiber rod stays connected with titanium receivers. 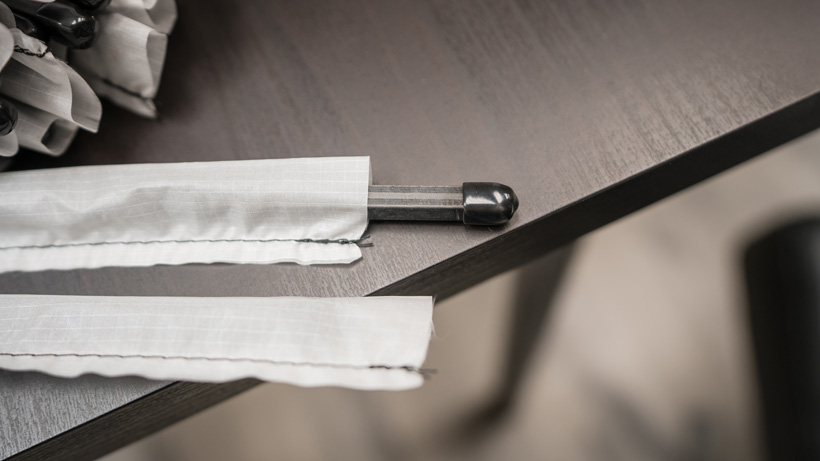 The upgrade to the current molded stays yielded a frame that is up to 60% stronger and 3 oz lighter than the previous model. If you buy an XCurve pack at this point, you’ll be getting the newer upgraded molded stays.

The name XCurve comes from the frame configuration and the curvature that is built into it. The XCurve has four carbon stays: two running vertically on the outside edges of the pack and two crossing in an X fashion through the middle of the frame. The stays are also curved to match your lumbar and upper back contours. This is one of the major differences between the two frames. The Krux EVO does not have the curvature built into the stays and that frame is straight up and down.

The frame on the XCurve contours nicely to my back and I feel like the frame configuration offers excellent stiffness both vertically and laterally. With the frame/bag loaded heavy, I feel like I get a really good seal on the lumbar pad and the curve of the frame fits comfortably and securely all the way up my back.

The other major difference in the two frames that I noticed is that the hip belt on the XCurve frame has an additional reinforcement between the hipbelt and the frame. It extends out onto the hipbelt and appears to add durability and strength to the hipbelt/frame connection. Beyond those differences, the frames are very similar and I will note those shared features later in the article. 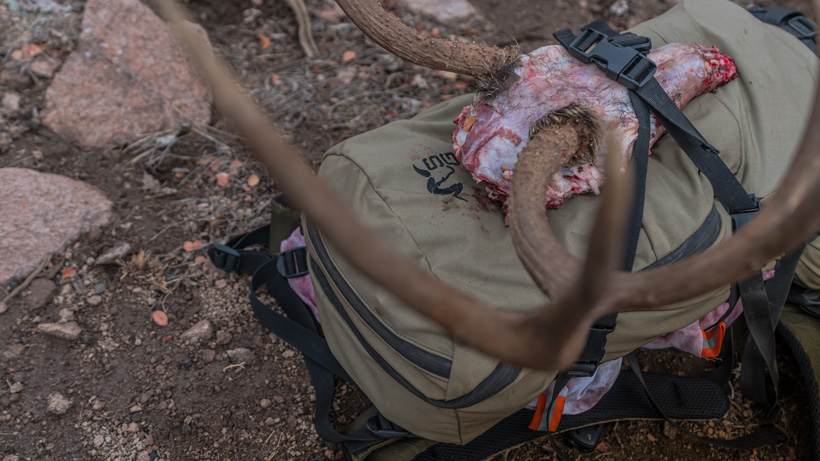 The Krux EVO frame is the evolution of the original frame that started it all for Stone Glacier. In my opinion, the Krux EVO is built for the ounce counting hunter who wants to go light and cover ground. With a medium hipbelt, the EVO frame weighs just 2 lb, 7 oz.

As noted, the biggest difference between the two frames is that they have different stays. The stays on the EVO are hollow carbon fiber rods almost like carbon fiber arrow shafts. The EVO maintains the same frame configuration with two vertical stays on the outside of the frame and two running through the middle of the frame in an X fashion. The hollow carbon stays are straight, so there is no curvature to the Krux frame as there is in the XCurve.

The Krux also lacks the added hipbelt/frame reinforcement points that the XCurve has, which is one of the two primary ways that Stone Glacier ditched weight on the Krux frame. The hipbelt on the Krux is still relatively robust and, by all accounts, still carries extremely well.

Thoughts from Brady Miller on the Krux EVO 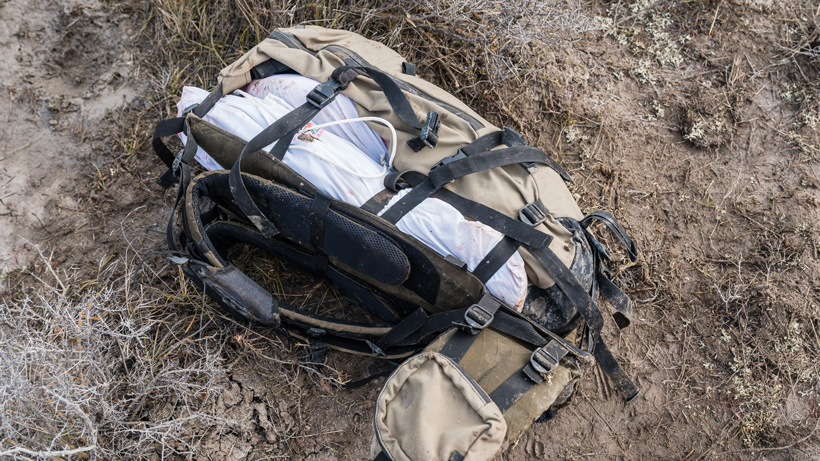 As Trail previously stated, the Krux EVO was designed for an ounce counter or someone looking for a frame that is more straight. Yet, cutting ounces doesn’t mean cutting durability. Where this frame shines for me is those burly and grinding hunts in steep and deep terrain. This frame has seen a ton of use on my hunts and that won’t end anytime soon.

Similarities between the two packs 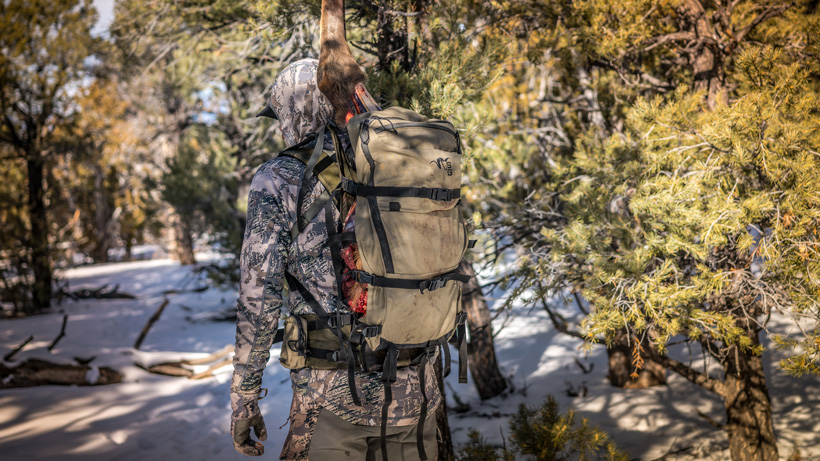 Both frames offer a 26” frame. Both offer heavy duty Duraflex military-approved buckles and webbing. The Powerlock hipbelt on both frames has the forward assist pull with locking features to reduce slip and give you a snug fit even under heavy loads. The shoulder harness on both frames is easy to adjust by simply undoing the hook and loop (i.e., velcro only 25% stronger) portion and sliding it up or down. This allows you to get a precise fit for your torso. You can also tip the individual shoulder straps out or in to get a fine-tuned fit for your shoulder width.

The material in both frames is 500d Cordura and X-pac fabric. The X-pac fabric is a composite fabric composed of three layers laminated into a single sheet, resulting in a technical fabric that is exceptionally abrasion-resistant, waterproof and highly stretch resistant. This material is used in high stress, high wear areas of the pack.The X-pac material is also easy to clean. I have taken my pack to the carwash a number of times and used the power washer to clean out the blood after a pack out. 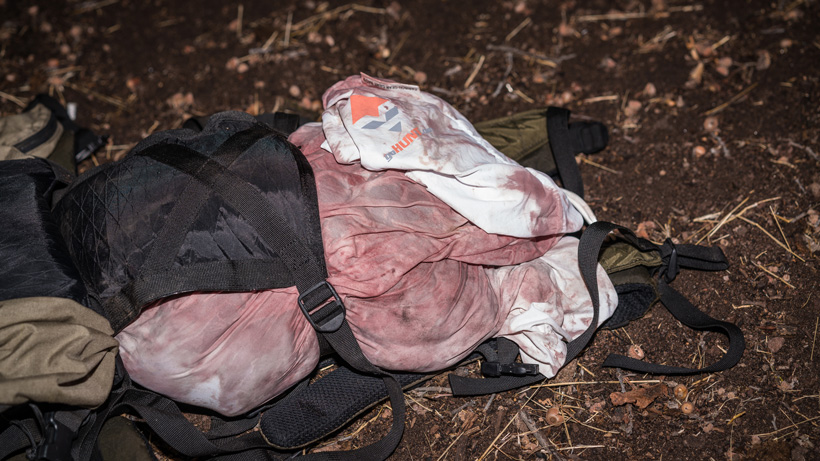 Both frames offer the built in load shelf, which is located between the bag and the frame. The load shelf in the Stone Glacier packs is one of my favorite features. The load shelf functions more as a bucket to place the elk or deer quarter or loose bag of meat in and with straps running from the shelf to the sides of the frame or to the top of the frame, you can easily and independently secure the meat before then clipping the pack back to the frame and further cinching everything down.

The other thing I love about the load shelf is the location. The load shelf on both frames is connected to the frame about 4” up above the base of the hipbelt. That allows me to secure the bulk of the weight further up the frame above my hips, which gives me more freedom of movement and a more comfortable and normal stride while hiking. Both frames carry weight well.

The final thing I would note is that both frames are compatible with any of the Stone Glacier bags. If you want to put a Sky Archer 6400 bag on a Krux EVO frame, you can. If you want to put an EVO 40/56 bag on a XCurve frame, you can do that, too. Overall, the style is well thought out and yields a very versatile pack. Both packs are well built and offer a 150+lb load rating. In addition, Stone Glacier packs are made in the USA, including the fabrics.

I would suggest that the Krux EVO is a better option for people trying to cut the most weight possible and go light and fast. Bighorn sheep hunters going on 10-day trips where they may end up many miles from the drop point and need to get everything out in one load would appreciate the Krux frame. 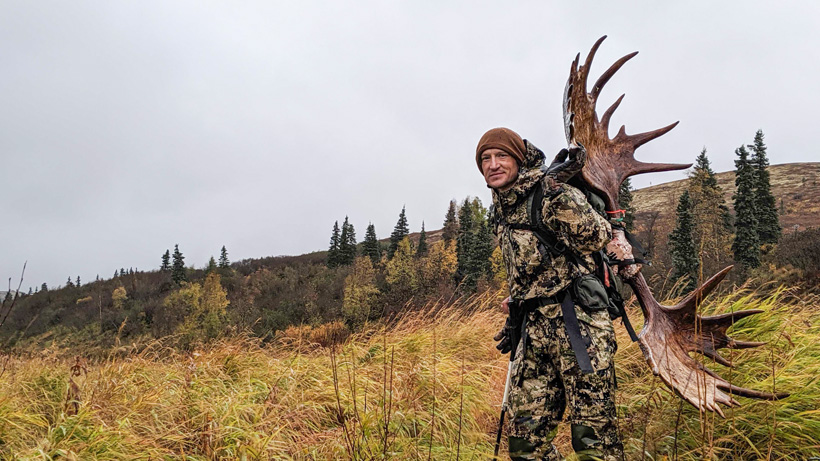 Trail packing his 2019 Alaska moose rack with his Stone Glacier pack with the XCurve frame.

On the other side of the coin, elk or moose hunters who may end up packing quarters or boned out meat over and over again, would appreciate the curvature of the XCurve and the beefed up frame and hip belt. It’s a workhorse of a frame.