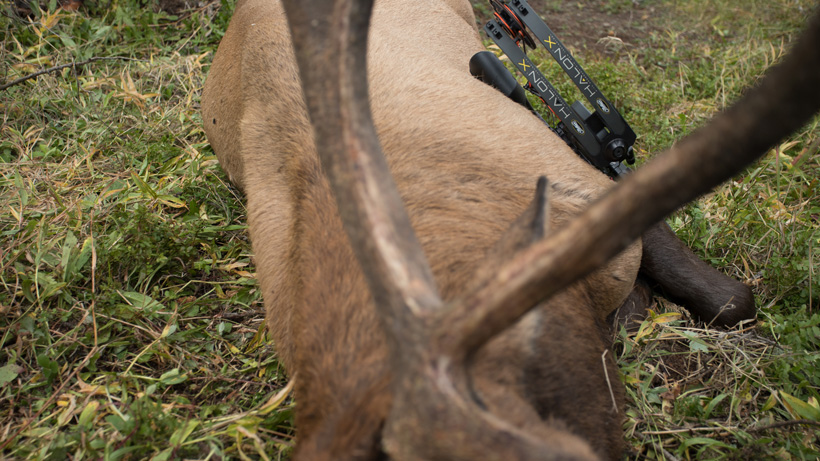 In today's world, after watching all of the elk hunting shows on TV and YouTube, you may be fooled into thinking that calling an elk during September is the only or best option to harvest a bull. While calling can be very effective depending on where, when and how you use it, stalking is another great technique and many hunters prefer to stalk over calling for a few reasons. Finding elk is often difficult to do on public land, especially land that offers ample or over-the-counter (OTC) tags. Elk are wild animals with unpredictable behaviors and I don’t like to take a gamble on what mood an elk is in on a particular day. Instead, I like to take matters into my own hands and get within bow range by paying attention to details. When moving in on a bull or elk herd you need to pay attention to the following details that will help make stalking elk more successful and, hopefully, help you harvest an elk this fall.

During any time of year elk behavior can be unpredictable. These are amazing animals that have an uncanny ability to detect danger, change patterns and alter their behavior on a daily basis for unknown reasons. During September, bull elk are the most vocal and most responsive than any other time of the year. They are also the most unpredictable this time of year. In my experience, elk behavior and response to other elk sounds can change from elk to elk and from day to day. These behaviors are typically either a behavior of curiosity, fight, attraction or flight. For example, when an elk hears another elk in close proximity to his location cow calling, bugling or even walking, a mature bull will often move in the sound’s directions for a closer look, showing their curiosity. Sometimes, when a bull is territorial and hears what sounds like another bull bugling or raking, he will pin his ears back and move quickly towards the sound to fend off his territory. When a bull is gathering his harem or thinks he hears another cow coming his way, sometimes, he will go to meet her or bugle her direction in order to “woo” her into his harem. 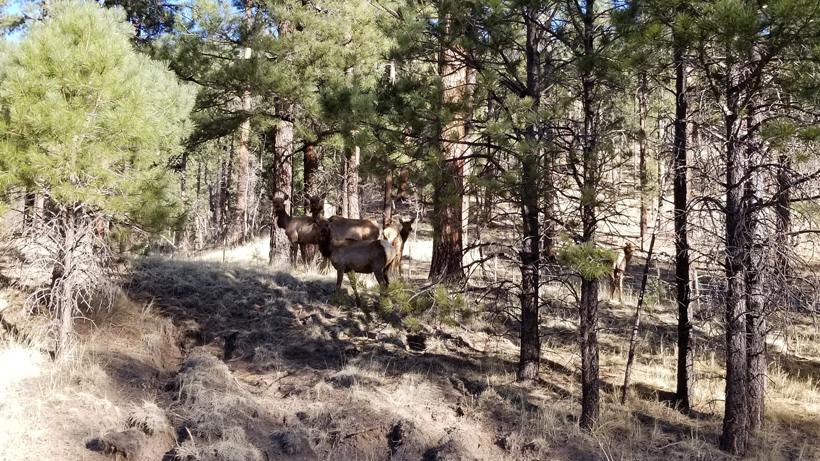 All three of these behaviors work out in favor of a hunter who is pretending to be an elk; however, the last behavior — flight — is the exact opposite of what every hunter wants. There are a lot of factors that cause a bull to respond to calling in with a flight behavior. A bull may be a non-dominant bull, he may have been called to and spooked by hunters or a bull may just use the flight behavior to stay alive. Though we will never know which of the reasons explain why a bull elk behaves a different way on a different day, I can confidently say a bull with a flight behavior is going to go the opposite way of your calling. This is the worst case scenario for a hunter who is trying to call him in and can be super disheartening, especially after doing all of the work to find the bull.

The number one thing, besides finding elk, that makes a stalk successful is paying attention to the details. The first and most important detail to pay attention to is the wind and thermal directions. Keeping these from heading to an elk can be very hard in the swirling winds of a high elevation basin, but you must try and pay special attention to where you are and where the elk is in comparison to the wind. If an elk smells you, 99 times out of a hundred it’s game over immediately. If, for some reason, he doesn’t spook right away, he will be on alert until he pinpoints a sound, movement or more scent from your direction and then he will be gone. Sometimes the wind will switch mid-stalk and will require you to back out and try a different stalk if you don’t want to spook the elk. You may be able to fool an elk’s eyes or ears, but you will never fool their nose.

The second thing that you must pay attention to is cover and terrain differences in order to use them to your advantage during a stalk. Cover and terrain can allow you to be protected from the sight of the bull you are trying to work close to, but also help protect you from your scent path heading to the elk. Countless times I have worked up an adjacent drainage to the one that a bull was located in. This kept me out of his sight, but also allowed the evening thermals to carry my scent down the drainage I was in and not swirl in the drainage the bull was in. If the area you hunt has a more open setting and there are no adjacent drainages or ditches to use as cover, then try to use trees and vegetation to mask your movement. Often, something as small as a pine tree is enough cover when used correctly to sneak in on a lone bull. As long as there is something in between the bull’s eyes and your movement, you can cut major yardage off your stalk in a short amount of time. When strategizing a stalk, consider all alternatives to cover and terrain when picking what you think will work the best. 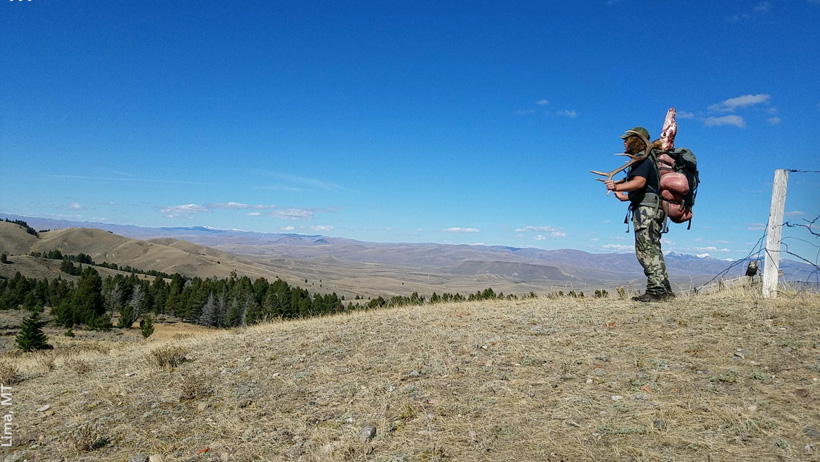 Another important detail a hunter must pay attention to is his or her sound upon the stalk. Elk are very loud animals when walking in the mountains and, if they are moving, you can move loudly as well. However, if they are standing still, then any sound you emit will draw their attention in your direction. — even if they are not spooked they will quickly become wary of something in your direction. Now, I do not think it is necessary to stalk elk in socks like it may be for mule deer; however, watching your foot placement and moving when they move will increase your chances of getting close. The quieter you can be, the less chance a bull will look in your direction and get skittish.

When stalking an elk, it's very common to think of the slow walk or crawl that is part of the stalk; however, sometimes a stalk requires a short section of run. Elk are very fast animals that move across their rugged, steep and thick mountains very efficiently. Often, to get where you need to be requires strategic movement and speed. If the wind and cover are in your favor and the elk herd is moving, then your sound — within reason — will not matter. Countless times I have made moves to get ahead of the elk herd by running up or down an adjacent drainage or side hill in order to get where I needed to be. Of course, the wind was loud or the elk were moving during this time, masking my sound. Whenever the elk herd or wind would slow down I would also slow down so the sound of me moving didn't put any of the elk on edge. Within the last 100 yards of a stalk, speed is not your friend and movement will easily spook a bull so be sure to slow way down and pay special attention to your movement and any sounds you emit.

The final thing that is important to pay attention to when stalking elk is the interception point. Elk are very good at getting from point A to point B in a short amount of time. It is so important to plan to be where they will be at instead of planning to be where they are at. Using the wind, cover, sound and your speed to get to the right spot takes some strategizing and some luck, but it can be done. Often, elk will travel in a way that keeps the wind in their face in order to smell any danger ahead. To counter this, you can choose to work parallel with the bull or herd in an attempt to get where they want to be just before they arrive. If you can be at this interception point waiting for them, you are in an excellent position to seal the deal. 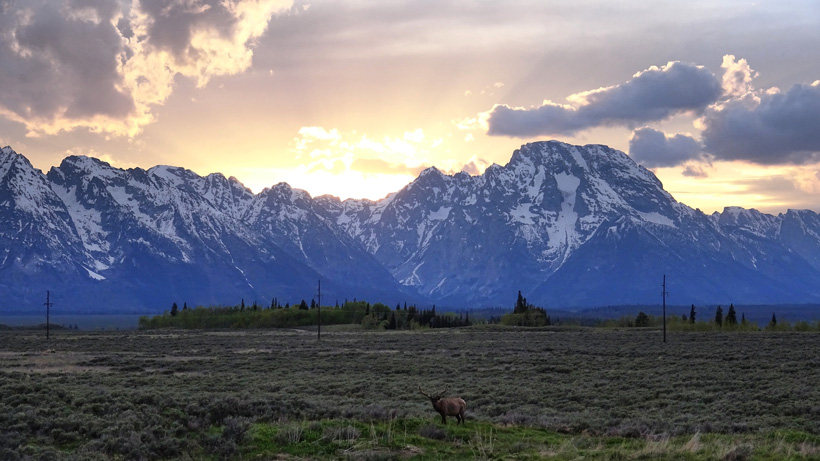 Whatever you do on a stalk, the most important thing I have learned is to put my pride away and back out of the stalk that is going south before it spooks the elk. Often, during September, elk will do roughly the same thing day after day and at least be in the same drainage until spooked or pressured out so do not be afraid to back out and come back the next day. Stalking requires strategy, execution and a lot of luck in order for everything to come together. Rushing and trying to make something happen even though the wind switched or you ran out of cover will only cause an elk to get out of town and find a new home area. Then you will have to start over and find a new bull. Good luck this fall and, hopefully, stalking an elk will be added to your playbook if the conditions are right.

Some more elk-related articles that you might find helpful: