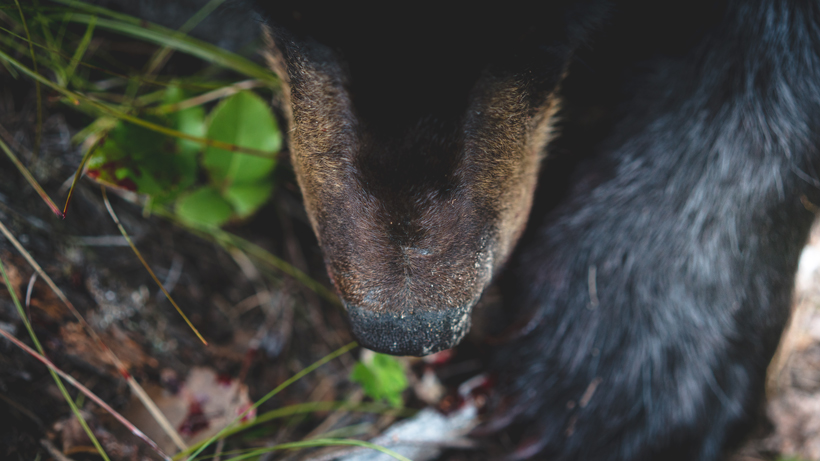 Black bears are one of the animals that absolutely amaze me. They live in some of the roughest and most unforgiving places in the West. They can weigh hundreds of pounds by consuming virtually anything from meat, bugs, plants and more. A bear's life consists of the natural instincts to forage and overeat so they can build up enough fat to survive the hibernation through the winter in their home range, unlike other animals who migrate down to lower elevation and better feed and milder winters. When they awake in the spring, they are ravished and need to put on weight so they feed aggressively throughout the spring, summer and early fall to get their fat reserves back up only to do it all again. Bears can be a challenge to find without bait or dogs; however, it is doable and the spring is the best time to do it. The most important processes when it comes to hunting bears in the spring is to find the elevation that they have emerged from, find their food and, then, find a place to shoot them from. All of these things are more easily said than done — no matter where you are hunting these bears. 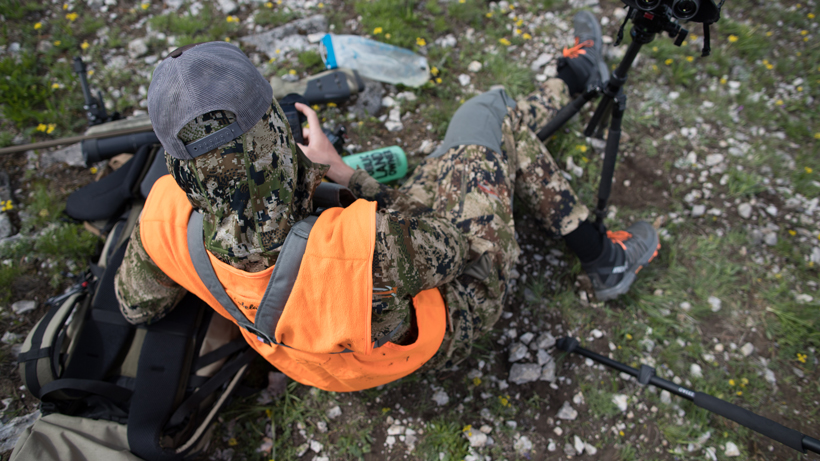 When bears go into hibernation in the winter, they typically stay near their home range, finding a cave, hole, tree or other denlike protection where they can safely slumber for the winter. When spring comes, bears wake up from their hibernation and are ready to feed aggressively. During the first few weeks awake, they are more prone to being in the open and staying out well into the morning hours and feeding hours before dark. This is a hunter’s best time to chase them. Whenever they start exiting their den, you only have a few weeks to find and harvest one of these bears before they go nocturnal again. However, it is important to understand that spring in the valleys comes months earlier than spring in the higher elevations. It is common to see flowers blooming down off the highway and still have a foot of snow at 10,000’ of elevation. No matter if you are planning to hunt early April or into June, you need to understand where the bears will be coming out of hibernation and adjust your hunting elevation accordingly. Some years you may find bears active at 9,000’ on May 1 when the snow is light and, the following year, the same bears may not come out of hibernation until even later. When it comes to planning and e-scouting, pick multiple spots at multiple different elevations and you will be in good shape no matter when you head to the mountains.

When thinking about a bear’s diet it’s easy to think about them as predators. Though they do eat meat, they also eat plants, berries, bugs and much more, which is why they are considered omnivores. In the spring when the bears are weak and low on fat and energy, the easiest thing for them to eat is plant life and the bugs and grubs that surround new growth. When thinking about where to start looking for this plant life, you almost always want to look at southern-facing slopes with large swathes of open sidehills. This will be the first place that the snow melts and the first place that spring growth comes to the mountains. 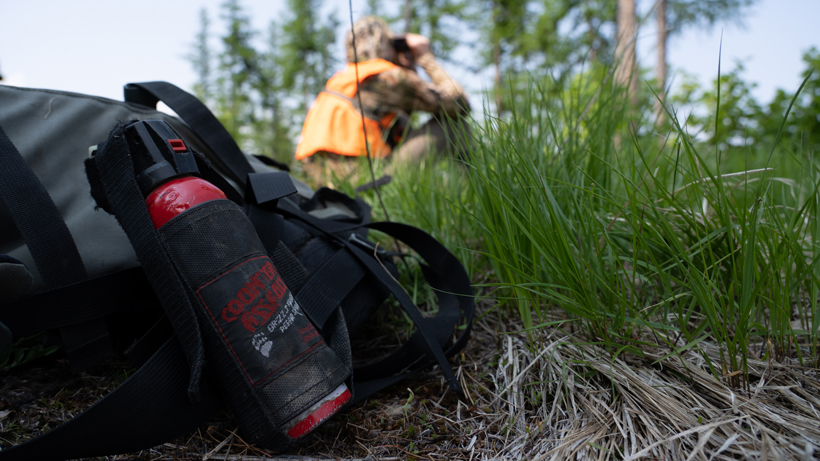 This will also be a place where deer and elk also flock to in the spring, which will also bring bears their second favorite spring treat: fawns and afterbirth. Bears have been known to follow birthing deer and elk in hopes of getting a quick meal, post birth. Again, it is important to remember that a southern facing slope at 6,000’ in elevation may have no snow and spring growth in March, but one at 10,000’ may still have snow until May. Find these open side hills on goHUNT Maps. Mark them and then try to find a way to hunt them. 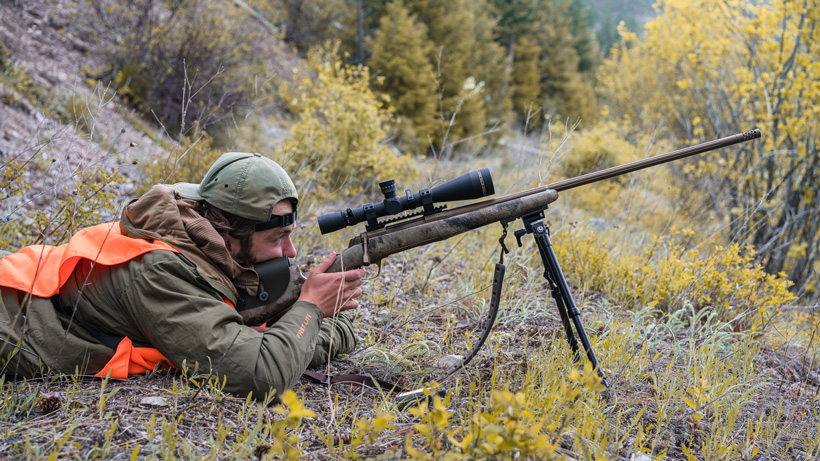 Often, when you are looking in high density bear areas during the correct time of year at the correct elevation, finding bears does not always seem to be the problem. The biggest problem I find that needs to be handled during your e-scouting is finding southern falling slopes that you can shoot into from the opposite ridge or the same side — either below or above. If you spend a few hours looking on goHUNT Maps — even in the thickest country — you will find some southern facing slopes that could be burns, avalanche shoots, logged hillsides or alpine level grasses. The trick is then to pick shooting positions and use the measurement tool in order to determine if you and your rifle are capable of making the necessary shot should a bear be on the southern face. These perfect side hills in steep valleys are few and far between; however, if you look hard enough, they are there. Another common strategy to hunt bears if long-range shooting is not your forte is to walk green, foliage covered logging roads. These offer hunters an opportunity to have a bear around any bend or corner along with closer shots. 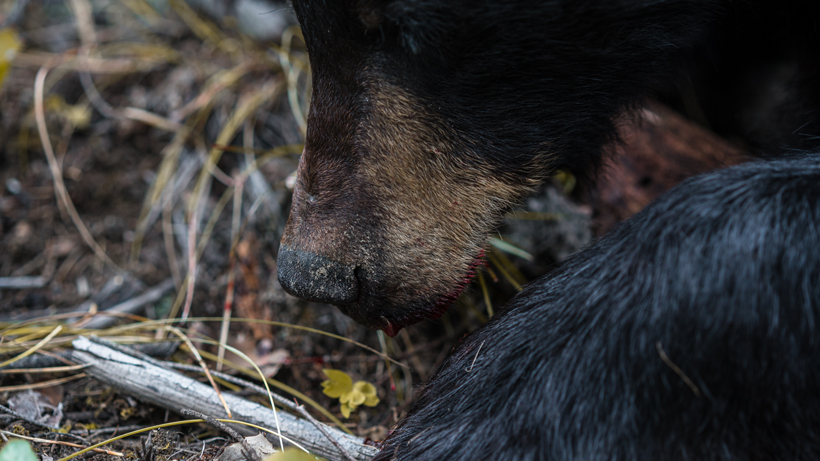 Spring bear hunting in the West can be a blast for you and a couple of hunting buddies. It does require you to put some miles on your boots and the weather can be unpredictable, but the memories will last a lifetime. To be successful bear hunting, find a hunting unit that has a high density of bears, do a lot of e-scouting at different elevations, find the open southern facing slopes that will be green first and, then, find a place to shoot from. When it comes to bear hunting it is a good idea to have numerous plans and backup spots to go. You never know when a road will still be snowed in and impassable or when a pull off will already have a truck there. It is also almost impossible to know what the weather is like in some of the deeper and higher elevation valleys. Get out there in the spring and chase some bears as they come out of hibernation.