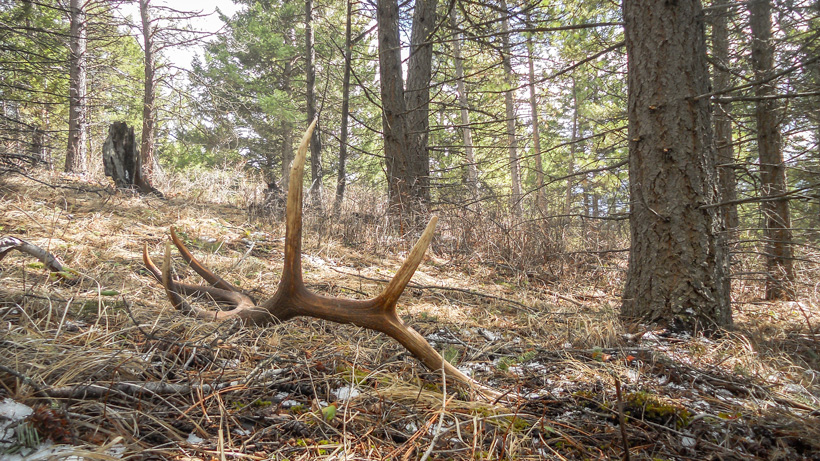 Shed hunting has become one of those western crazes that has overtaken the hunting population. After all, who wouldn’t want a huge elk shed for room decoration or have a little extra change in their pocket? Between the shed hunters doing it for fun, for money or to use in rustic designs, there are a lot of people that partake in this activity every spring — so many that most states have a shed hunting season. No, you do not need a license to shed hunt, but some states make you take a test to get a shed hunting certification! As you may or may not know, elk drop their antlers in late winter to early spring — usually around mid-March, when their testosterone levels are at the lowest. Though they usually fall off sometime in March — most states do not let you collect sheds until later on in the spring due to the stress it can cause on the animals. Here are a few tips to help you find sheds this spring in the western state of your choosing when it is legal and at a time when it doesn't stress out animals. 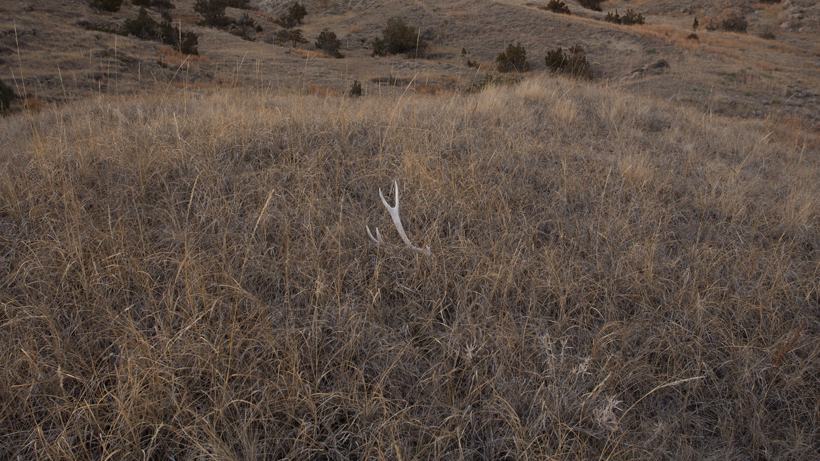 When it comes to finding sheds, you should be concentrating your e-scouting efforts on their wintering grounds, mostly on south-facing slopes where the snow is the shallowest and the food will be more accessible. 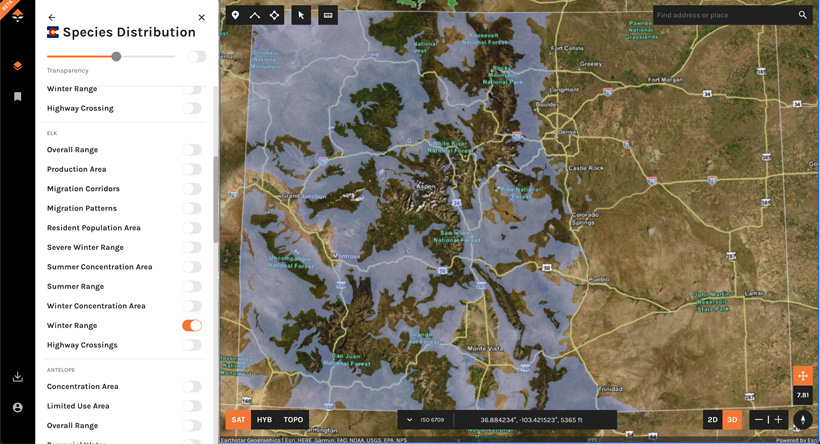 Another great option for scouting for sheds is by using goHUNT Maps. The winter range maps can be very useful in fine-tuning where you might want to concentrate your efforts. This is found under the "Species Distribution" tab when you're looking at a state.

As mentioned, elk typically drop their antlers around March, which is still a very cold and snowy time of year in the mountains of any western state. By the time the shed seasons open up in April to May, the same elk have migrated back up into the higher elevations where they will stay for the summer. Though this is way better for their health and causes them less stress, it can make it more difficult to find the elevations and locations where the elk were one to two months prior. This is why physical scouting, e-scouting and some phone calls to some local biologists and game wardens will make you way more successful this shed season.

Pre-season scouting at a distance

Though you need to wait to find sheds until the appropriate legal seasons, you are still allowed to access a lot of the areas that elk might inhabit during the February to March timeframe when they will be wintering. Again, I will place a strong emphasis on doing this from a long distance away with optics so you will not disturb animals in their winter areas. Many times, these areas are near towns, roads and trails at low elevations where you can see and glass elk at first and last light from afar. If you live out West and you have the time, then take a drive with your family and dog to explore some mountain towns during February and March. While you are out there, talk to some locals and find out where you can see elk. Then, once you get back home, analyze and mark down these wintering grounds on goHUNT Maps. This will help you to fine-tune where bulls might drop their antlers.

Typically, herds of cows and small bulls will be very visible, especially in snowy terrain situations; however, some of the bigger bulls will be in nearby sanctuary basins. Even though it’s winter, they still like their solitude, safety and distance from the population. Please do not go off-trail and try to find these bulls or herds of elk during the early time of year. Winter in the mountains is hard for all animals and any time you push them or scare the herd, they burn unnecessary energy that they struggle to get back with the limited nutrients in the winter plant life. Speaking of that, here's a great article on goHUNT on the ethics of shed hunting. That is why once you mark the herd’s location, it is your job to e-scout and find some possible sanctuary basins nearby. These will be the areas you want to check out come shed season when the elk are safely back into their summer homes and you have the place to yourself. 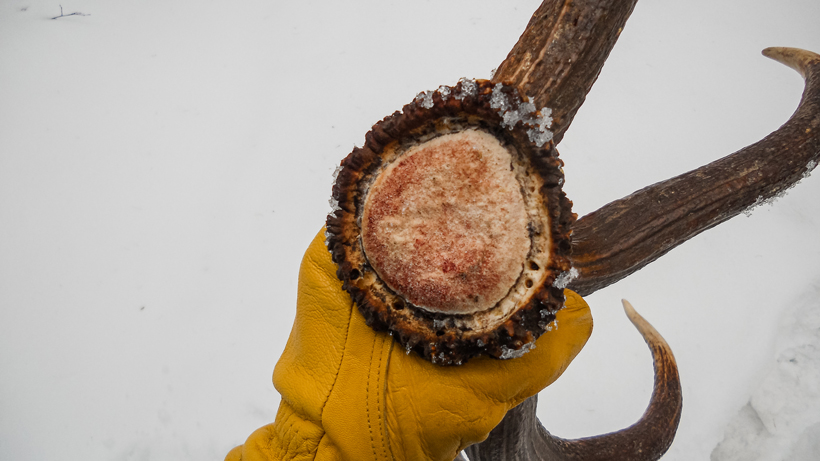 If you do not have an opportunity to go out West during the February and March timeframe, make some calls to local, state and federal employees. Talk to biologists, game wardens, forest service personnel, sporting good store owners and anyone who is willing to give you some information. Ask good questions that give you an idea of snow levels, elk wintering habitat and any elevations that they are near during February and March. Be appreciative of the tips they give you and be sure to take good notes. When you call the next person, tell them some of the information you already know in hope that they give you different information. After a few different people, you should have enough information about herd size, wintering grounds, access points and more. Compile this information and finalize your scouting with a plan of attack.

Tips to find them 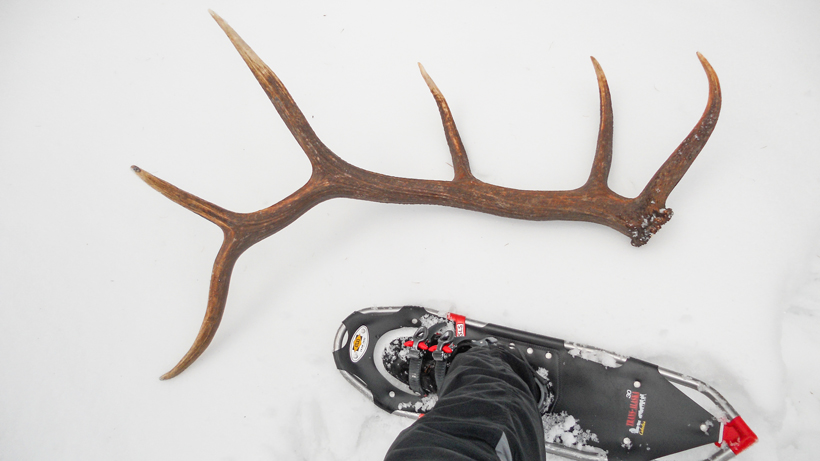 The best way to find elk sheds is understanding where they were, — or at least what approximate elevation they were at (you can even use the elevation bands on goHUNT Maps to your advantage for shed hunting) — during February and March. You can do this by driving around (if you are lucky enough to live out West) or by calling around. Then, plan to put a lot of miles on your boots and time behind the glass in order to be successful.

If you are going to plan a shed hunting trip and if the state has a shed hunting season, then plan on being there during the first days of the season. You want a chance to find the easy sheds as well as the difficult ones before everyone else goes out. After a few weeks, there have been a lot of people on the mountains, especially in well-known areas with high elk populations. Concentrate on southern facing lower elevations slopes inside their wintering range and you will find some sheds; it is only a matter of time and miles.

Overall, shed hunting has taken over the minds of the western hunters and for good reason. There is no limit to how many sheds you can find, there are no points needed to go into trophy units, anyone from young to old can shed hunt and it’s super exciting when you find a huge elk shed. If you have a chance to get out into the mountains during February or March, keep an eye out for elk herds from afar so you don't disturb them and stress the animals out, but even if you don’t, then at least make some research calls. When it comes to e-scouting and shed hunting, it is better to start off with a little information than no information at all. Then, whenever your state of choice’s shed hunting season is open, get out there and find some of these beautiful brownies that fall off the head of some monster elk.