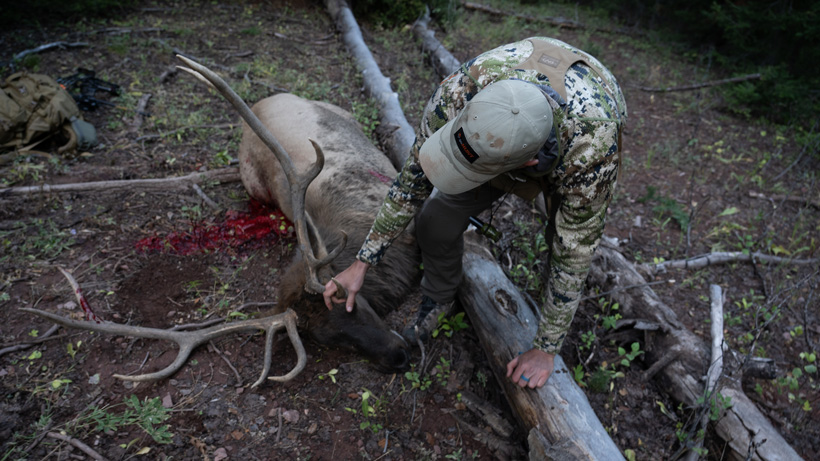 The moment we all look forward to. Photo credit: Chris Neville

September is a sacred month and, beyond that, the 15th through the 25th are the most anticipated 10 days of my calendar each year. It's a culmination of sights, sounds, smells and the dynamic nature of archery elk hunting that sucks me in so heavily that it’s almost completely consuming. In preparation, I am always analyzing the factors that can make or break my hunt. My goal, which I think most of us share, is to harvest a bull with my bow. With that in mind, I want to share what I would consider the critical puzzle pieces to finding success in the elk woods each fall.

The most common question we get is, “How do I find elk?” Assuming you have selected a unit to hunt or have drawn a permit, the next step is to think about what elk need — and even more so — when they need it.

Water plays a critical role for elk — much more so than mule deer. Elk need water every day. In many areas of the West, water is plentiful in the high country, but in the arid states like Utah, Nevada, Arizona and New Mexico, water sources are great places to start your search for elk, especially early in the season. 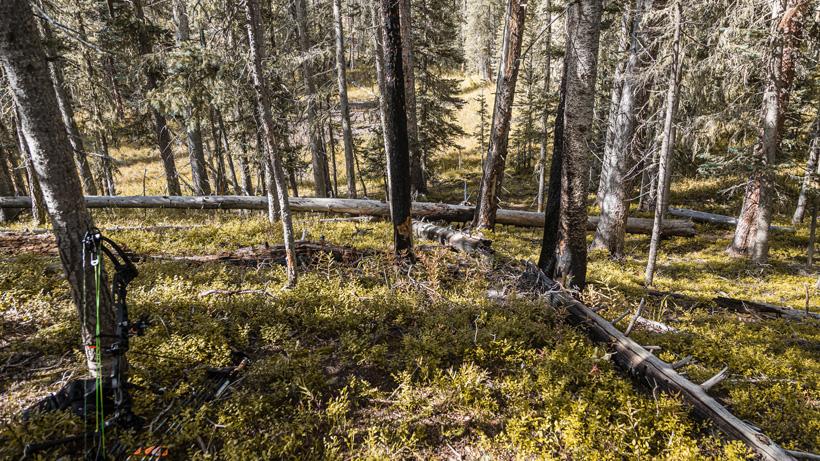 In addition to water for drinking, in early September, bulls will establish “wallows” that they will utilize to coat themselves in mud and their own urine. Essentially, they are trying to make themselves into a walking advertisement to attract cows that will be coming into estrus in the coming weeks. A wallow can be made in a wet meadow, a seep, a spring, a pond or, even, a stock tank. Experience suggests that bulls begin wallowing a couple of weeks prior to most cows coming into estrus and they will continue to wallow throughout the rut.

Wallows are phenomenal ambush points — most notably in the early weeks of September. If you are struggling to call in elk, ambush hunting on a wallow is highly effective. Bulls are most likely to visit a wallow just after first light or just prior to dark. Using aerial imagery, I’d encourage you to focus on finding water holes, wet meadows, seeps, springs and any small open green benches with water. If you can find a spring seeping out of the side of a shady north facing timbered slope, elk are typically not far off. For more information on how to hunt wallows for elk, check out an article I wrote here.

Food is the second feature I look for when evaluating a landscape to find elk. Elk are more of a generalist when compared to mule deer or antelope, but during August and September they are going to be grazing green grasses and forbs primarily. In the last weeks of August and early days of September, bulls will be heavily focused on consuming calories in preparation for the rut.

To understand what you are looking for, evaluate the type, quality and amount of vegetation covering the ground. For example, in conifer forests, elk flock to recently-burned areas due to the flush of grasses and forbs that follow. Small clear cuts, logging areas or habitat restoration areas provide greater amounts of quality forage. Beetle kill is rough on old growth trees, but it opens the forest floor to more light, water and nutrients and produces phenomenal feed. Aspen forests have particularly healthy understories of grasses, forbs and new shoots. Alpine meadows and avalanche chutes are highly productive feeding areas. Elk love mosaic high edge habitat types. By that, I mean patchy mixes of open feeding areas intermixed with heavy timbered bedding areas. If I can find a mosaic of feeding areas and heavy north facing coniferous bedding areas sprinkled with some wet meadow benches and seeps, then I know I will find elk. One more side note: elk are famous for feeding up slope toward bedding areas in the morning with the thermals coming down to their keen noses and down slope in the evening once again with the warmer afternoon thermals carrying up slope.

I touched on the last habitat requirement above, but to quickly revisit it: elk need cover. The type and location of the cover they choose changes somewhat later in the year, but in August and September throughout most of the West, elk are searching out cool shady north or west facing slopes in the morning and may transition toward east facing slopes in the afternoon. Essentially, they are chasing shade and cover mid-morning during the warm early season months.

The last piece I will touch on is security. Elk are susceptible to hunting pressure and will gladly move into new drainages to avoid it. The more recent trend of going farther into the backcountry has interestingly created somewhat of a pinch point in a lot of areas where the elk are not as steep and deep as they once were, but are also not hanging out by the road. More frequently, I am focusing on the areas in the three to five mile range away from roads and trailheads.

In conclusion, evaluate the landscape in terms of what elk need and you’ll find elk. And with goHUNT Maps, that research is now easier than ever!

Getting within range — elk hunting methods

The goal is to get within range of a bull, and more specifically, a herd bull. Within that, it’s worth noting that there are several methods and the more of those tools you have in your toolbox the more successful you will be. The versatile archery elk hunter is the one who fills tags. 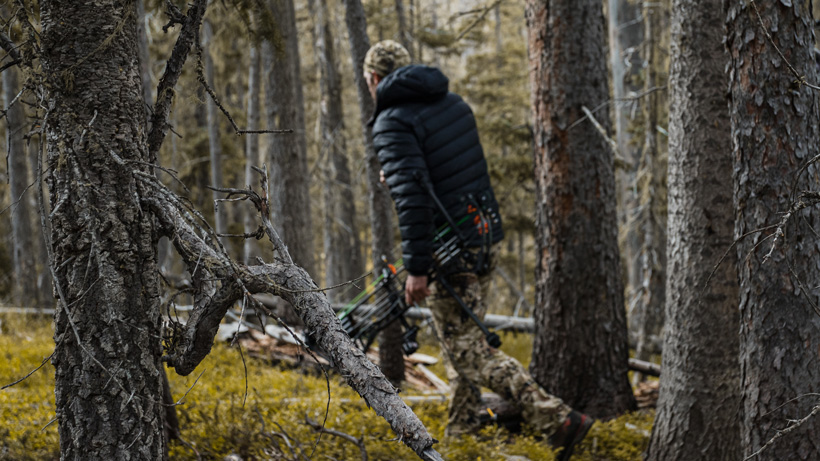 In August and perhaps even into the first week of September, it’s not uncommon for bulls to occupy the same areas where they have spent the later parts of June and July. One of the best ways to kill a true giant bull with your bow is to catch him early via spot and stalk techniques prior to him moving toward the cow/calf herds. In these instances, scouting is critical. After that, standard spot and stalk methods apply: keep the wind in your favor, stay quiet, concealed and patient.

As previously stated, wallowing begins about two weeks prior to the cows coming into estrus, which would be approximately the first week of September. Early in the month, ambush hunting over an active wallow from a quickly constructed ground blind is very effective. 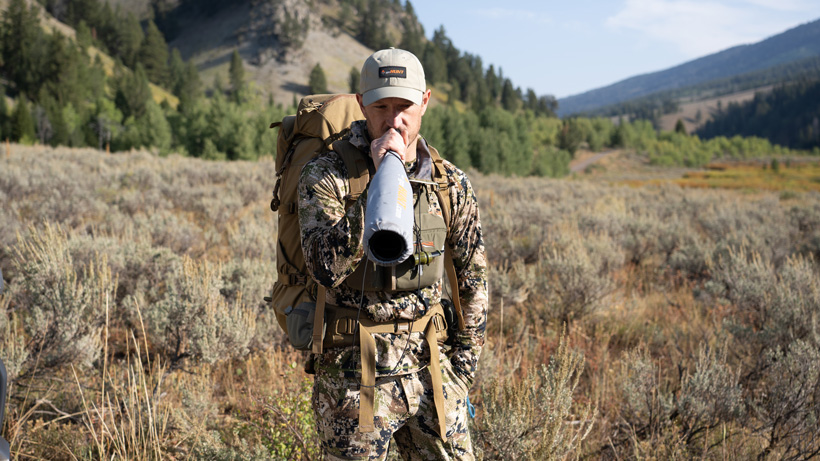 As the bulls move into the rut, they often become more aggressive and vocal. Calling increasingly becomes more effective at this stage. There seems to be two major schools of thought in terms of calling elk. One, there are individuals who lean very heavily into bugling and working bulls into an excited and aggressive state and pulling them in to fight. Two, others may utilize a cow call or a bugle to locate a bull and then sneak in or shadow the herd quietly without calling until they can either get close enough for a shot or possibly lure the bull out with some soft cow calls. Both methods work, but I have a few thoughts on each.

If you plan on using the more aggressive approach, you often need to encounter more bulls to find the right bull on the right day that is ready to commit. You are also more likely to encounter and call in younger more inquisitive satellite bulls. The more proficient and versatile you are with a bugle often yields better results with this style of calling. The pay off to this type of calling is that it's highly interactive and rewarding. The satisfaction of trading guttural bugles with a herd bull is unmatched. It’s a really fun way to hunt, but pulling a herd bull away from cows can be challenging.

The alternative is a more stealthy approach and not nearly as interactive. Often, it involves minimal cow calling or a locator bugle and a lot of leg work to shadow a herd as they make their way towards a bedding area. The pay off on this style of calling is that you may be able to slip into the herd bull’s bedroom and get close enough when he checks each cow mid-day or possibly softly cow call him away. The downside is that it’s often not as interactive and can require a lot of patience.

More great articles to check out: