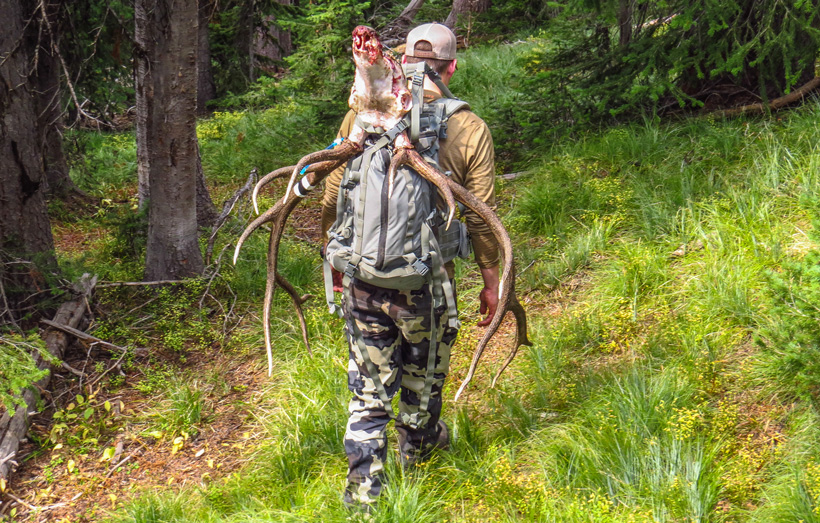 Developing the proper scouting strategy can lead to make moments like this. Photo credits: Dave Barnett

After reading the last segment on using online resources to scout and plan for your new hunting area you should be about ready for some boots on the ground scouting. Techniques and strategies for scouting your area will vary based on topography, ground cover, and available time which is why I will cover ways to maximize your time in the field.

The first thing I like to do when preparing to scout a new area is formulate a plan of attack in an effort to maximize my yielded results based on my time available. By doing this, even short day hikes can show an area's true potential. When all of the stars have aligned and I have several days, consecutive or not, to scout an area I can be much more comprehensive and thorough with my efforts. With a constantly changing schedule, things can happen and my time in the field can become less and less. Unfortunately, at the time that I am writing this article, life has been a fast moving blur of weddings, work, and a newborn on the way. I had one day to scout and, with a well planned route, I was able to find exactly what I was after.

To begin building a detailed plan, I like to first look at the terrain of the area I’ve selected. My particular area has a very prominent ridgeline that runs the course for most of the area I plan to hunt with west facing drainages that feed off of this ridge. An obvious path to cover the most ground will entail walking this ridge in it’s entirety, which will do two things: Provide me with an accurate gauge on the overall hike and allow me to get a good grasp on the terrain I can expect. 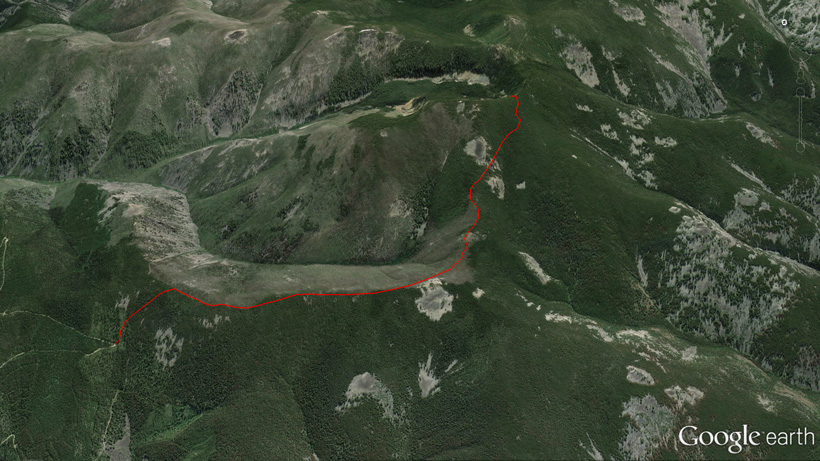 Secondly, because this is only a day trip, I won’t have the time to hit every area I’ve marked so I need to establish the one area that I feel will hold the most elk. I know for sure that I want to look at the back bowl, but, due to it’s smaller size and extremely difficult access, I can pander this down to an area that I can effectively glass and gauge its probability to hold elk from a vantage point. After that, I will head back towards the west and follow a large finger ridge down and then sidehill it back to to the main ridge. This is the furthest draw from the truck as well as the highest, which will lead to much less competition and generally unpressured elk. 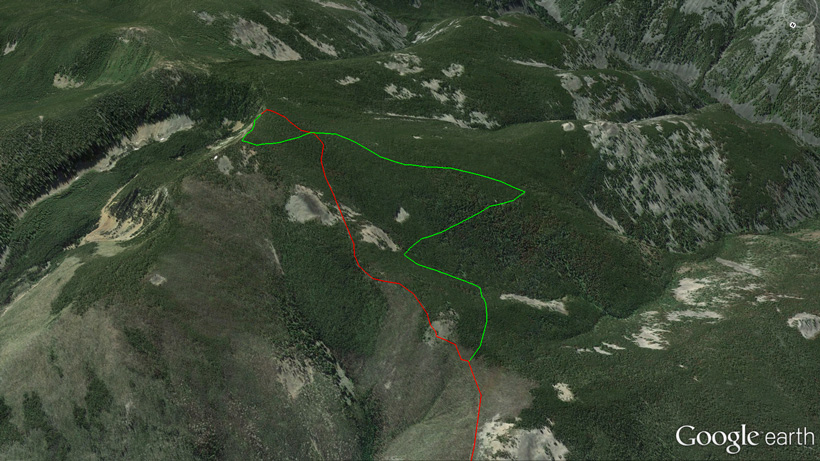 This path should lead me through what I feel is the most likely elk habitat and should give me a good idea on what to expect for the area. After getting comfortable with my plan it was time to load up the pack and hit the road.

When planning your scouting trip don’t over think the process; think like you are an elk. Where would you go if you wanted to be largely undisturbed? Would you look for an area where you had to drop 1,000’ to find water every day? Elk will always take the path of least resistance and can be fairly predictable in their movements from bedding to food to water.

Running through a scouting day example 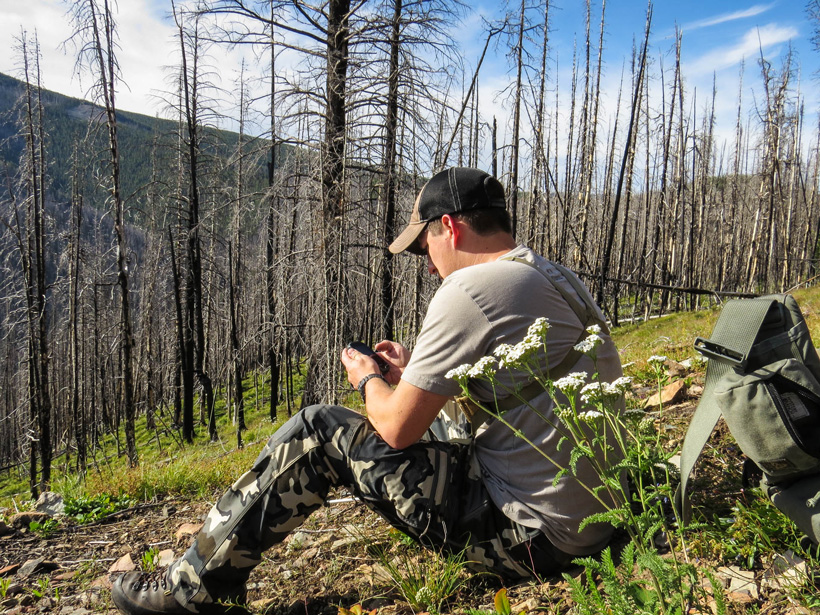 As I am following my route I will mark waypoints at any areas of interest such as high points that can be good bugling and glassing points as well as obvious signs of elk such as tracks or scat. If the terrain allows it, I will also try to glass into areas that I had previously marked on Google Earth as an area of interest in an effort to establish if they require further investigation or not. Another good tactic that I have began doing is timing myself from the truck to newly marked observation points. This will give me a good grasp on how long before daylight I will need to leave the truck while actually hunting.

The big ridge running through the burn showed some great promise for feed and will likely be an area I will want to still hunt as the first rays of light bring life to the mountain. I marked a good spot to listen for bugles on my GPS but due to the sheer amount of standing timber remaining from the fire glassing opportunities were fairly slim. 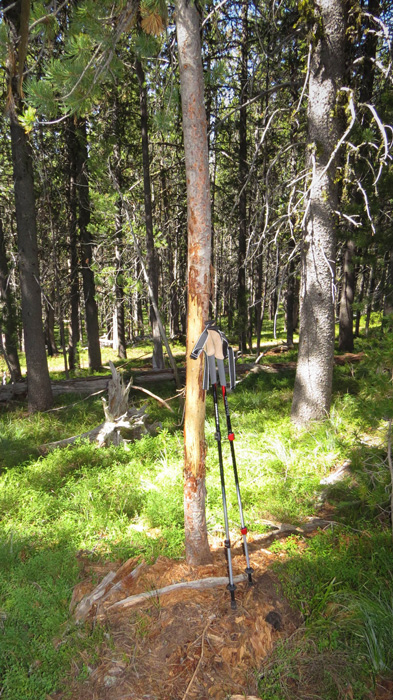 Whenever I come across a rub I will really slow down and begin scanning the area for additional signs of rutting activity. Elk rub a lot during the rut. If I can find an area with multiple rubs from multiple years, I’ll quickly begin to paint a picture of elk movements during September. Because I’m not necessarily interested in returning exactly to one particular rub, I generally just make a mental note of the area instead of marking a waypoint and utilize this information at home on Google Earth later.

The top bowl has some shown some serious potential as an elk playground. The area is secluded enough that very few hunters, if any, will see it on a consistent basis and it contains everything elk need: food, water, and cover. From my vantage point I was able to establish all of these necessities and was able to find a location that would allow me to bugle into the entire valley effectively. This is an area I’ll definitely expect to find elk come September. 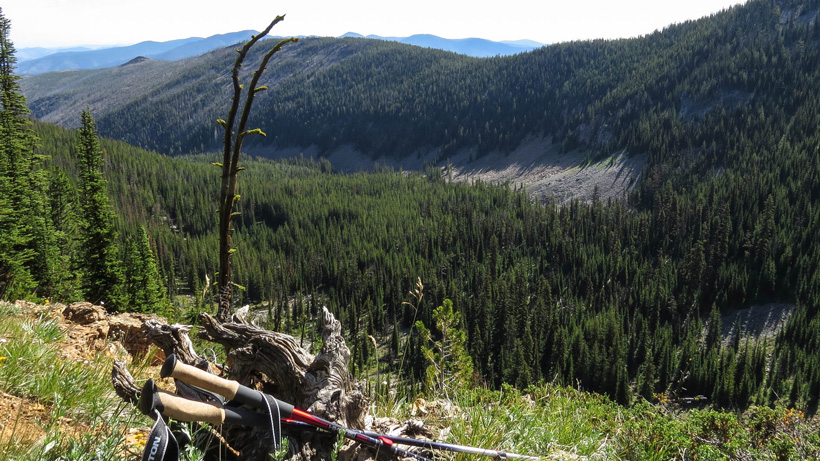 I knew elk would more than likely bed in this top bowl, but I also knew that there had to be more areas also so I descended down a large finger ridge to the west where I had encountered a cluster of rubs near it’s highest point on my way in. A worn trail led it’s way down a lodgepole-choked ridge where I encountered more rubs and several smaller trails bailing off to the northern face of the drainage. While scouting, I’m always trying to be conscientious of well used trails as these will often lead to prime elk spots and provide some excellent areas for ambush or cold calling points. 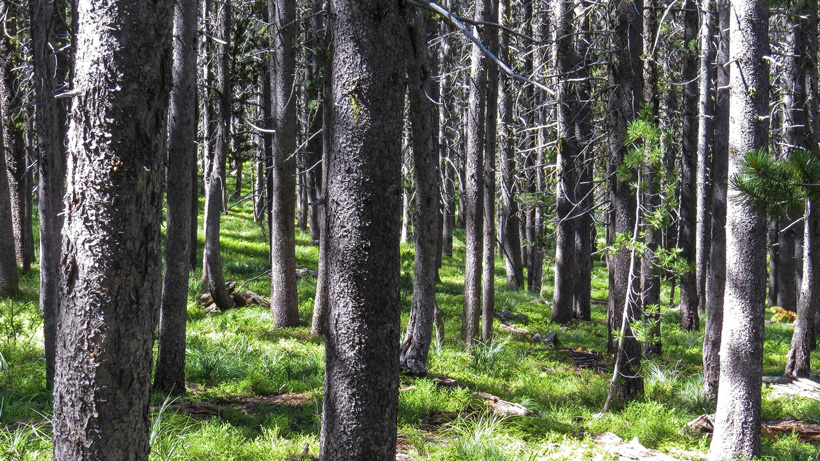 After following the ridge for half of a mile or so my trail took a definitive turn to the north and began descending towards the bottom of the drainage where I had previously marked some areas of interest as possessing water. Halfway down the slope, the vegetation began to increase in density as large clusters of mountain maple sprang up, undoubtedly signaling nearby water and good cover for bedding. To establish what I feel is a good bedding area I will often look for small benches, heavy cover, and easy exit routes for the elk to take. 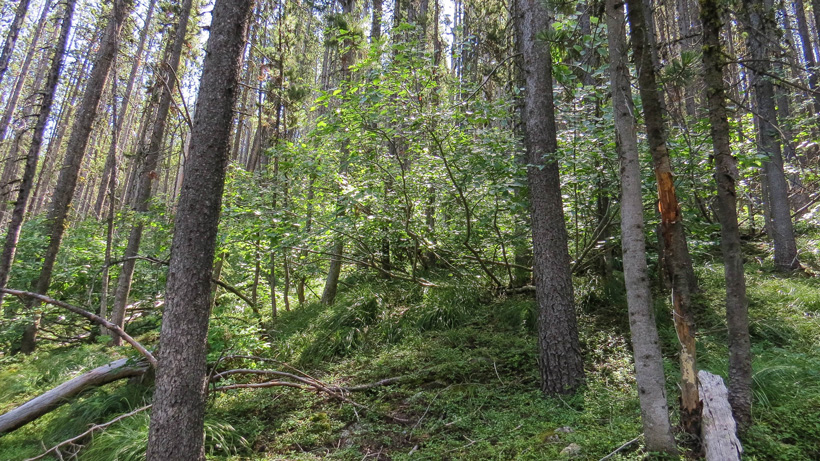 After encountering the likely bedding area, I continued to drop into the bottom of the drainage in search of a water source. In the bottom, I encountered several small water runs, lots of rubs, and heavy trails. This area shows some extreme promise due to close reciprocity of elk sign leading me to believe that this area will undoubtedly hold elk during the rut. I followed another heavily worn trail out through another bedding area and, eventually, back to the main ridgeline that led back to the truck. While I did not have a ton of time to scout this area I was able to locate some incredible sign by focusing on the most probable areas and will be able to formulate a very effective game plan for opening weekend. 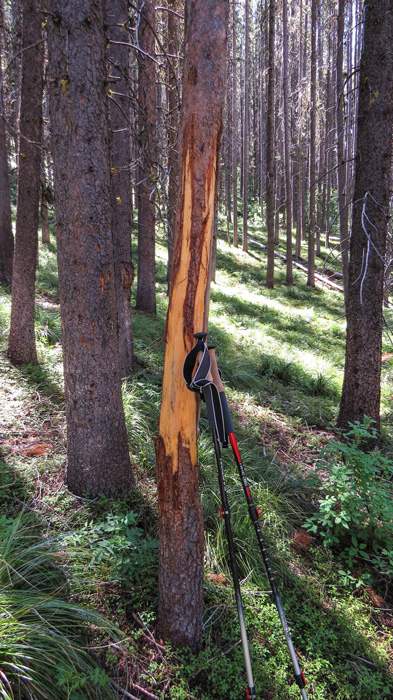 Translating your hike into usable data 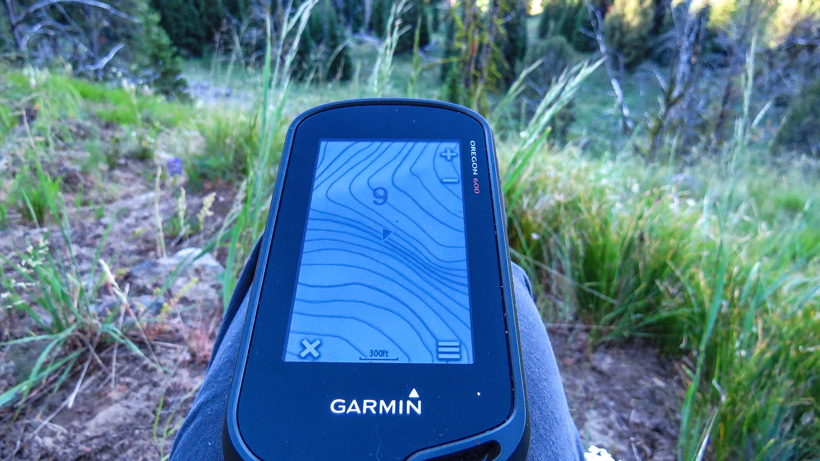 Once you’ve returned home it is now time to filter through the data and begin painting a picture with a broader brush. We will now import our newly marked waypoints and apply our newfound knowledge to better map the area.

To begin, I like to first import all of my new waypoints in Garmin Basecamp through the device transfer button. This will backup all of my saved information in case something catastrophic were to happen to the unit. Next, select all of your new waypoints in Basecamp, right click and select “View in Google Earth.” Google Earth will now open and my new waypoints will be visible where I can rename them as needed. After doing this, you will probably notice that some previously marked waypoints and our new field verified waypoints will be overlapping. To fix this, simply right click on your older waypoint and select “delete.” Now, you should have a clean map showing new and old waypoints together. I also like to make sure at this point that my new markers are represented by a different color pin as this will ultimately lead to an easier to read map. 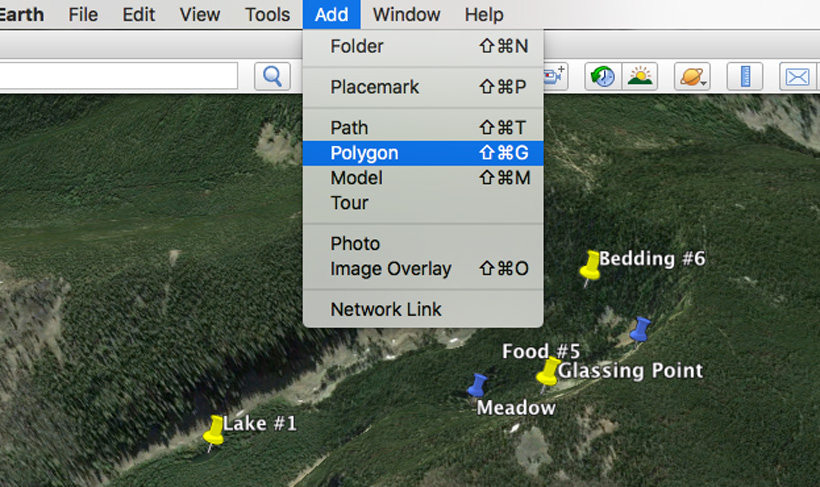 For my final mapping task, I like to use the the Polygon tool to draw out the rough areas where rubs were encountered. I like to change my polygons to an easy to see color with the opacity set to about 25% so I can still see ground cover. This will allow me to see a bigger picture of rutting activity in the area and obvious travel routes should start becoming more and more apparent. 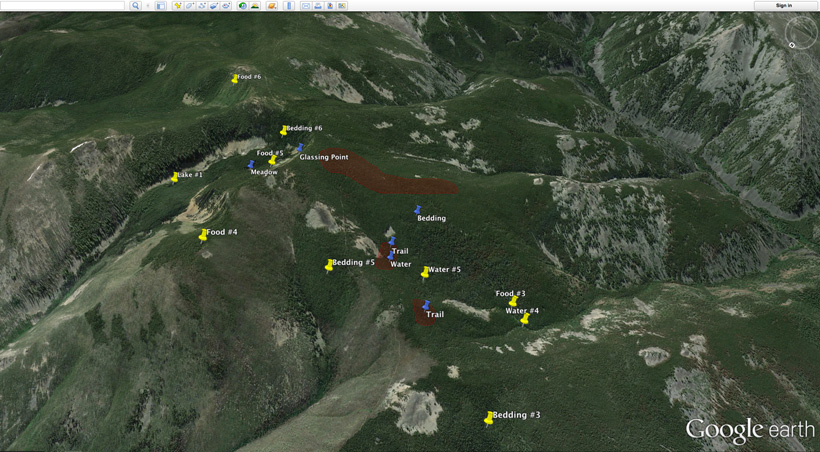 As you can now see on my map, travel routes and areas to concentrate on have become fairly visible and I should no problem finding elk here once the rut starts.

By following the steps I’ve outlined in this three part series you should now have a fairly good grasp on your new area and will be able to formulate a strong game plan for the first hunt.

If you haven't read part one and part two yet, a short description and links to the articles can be found below.

This first article covers how to narrow down prospective over-the-counter units to hunt elk. You can read the article here

This article dives deep into tips to help you scout for elk on mapping programs like Google Earth. You can read the article here.

Don't be discouraged if your new honey hole does not produce the obvious signs of elk you were hoping for while scouting. Personally, I probably cross off twice as many spots as I add on a yearly basis. E-scouting will become increasingly easier the more you do it; however, and soon you will be able to pick out likely elk spots with greater ease. This level of technology involvement will not be for everyone but, for me, it helps create a crystal clear map on my new prospective areas and allows for a much more efficient use of my time come fall.