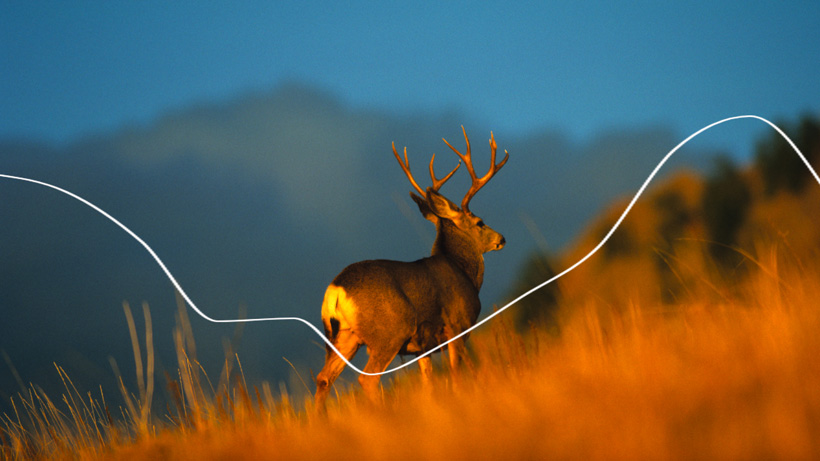 Montana is a state with a plethora of hunting opportunities, especially when it comes to mule deer. Over the years I've continually tried to find the best way to showcase population and harvest data to help hunters out. And for this year, I'm taking it one step further with a full outlook of mule deer populations and harvest trends across the state. Also it should be noted that Dave Barnett contributed to the text section of the Region descriptions.

The above graphic showcases a statewide mule deer population heatmap that is broken out by Montana's hunting regions. I adjusted the heatmap color to differentiate the region by region population map from the graphic below which is the number of bucks taken by region. You'll quickly notice that the regions with a high population, equals a higher harvest, which in a sense, shouldn't come as no surprise. The maps are almost a complete mirror of each other except for the number of bucks taken in Region 3 and 5.

Region 1 is found in the northwest corner of the state and features some of the roughest and toughest country to hunt. This area experiences heavy snowfall and rain throughout the year, which leads to incredible amounts of dense ground cover. This vegetation combined with steep ridges that top out in impassable rocky cliffs gives hunters a physically demanding hunt. Mule deer are found in lower densities here; however, they have the potential of turning into mature, dark antlered giants thanks to the terrain and cover. Trophy potential is generally lower in this area but that figure can be slightly skewed due to the fact that bucks can easily grow old and die in this country. Winterkill can be a major concern if heavy snowfall hits this region. While this is a physically demanding area of the state, this region will present hunters with unparalleled beauty and a hard-earned opportunity.

Region 2, found on the extreme western edge of the state, is home to the famous Bitterroot Valley though hunting success in this area has been down for a few years now, specifically among mule deer. Going against the norm, HDs 261, 262 and 270 provide some of the biggest mule deer in the state with a handful eclipsing the 200” mark taken every year. Hunting competition will be high around the city of Missoula, which is located at the heart of the region. In the northern end of the area, hunters will encounter dense forests similar to Region 1 before the terrain and vegetation transitions into more open and sage-covered slopes on the southern end. Previous logging and mining activity can be found across much of the region, providing hunters with easy access into the backcountry and making navigation and avoiding crowds somewhat difficult. Winterkill could be a minor concern in this area if heavy snowfall hits, though it is not expected to make a huge impact.

The southwest corner of the state holds good populations of deer and also houses great wintering grounds for migratory herds of mule deer. Region 3 attracts a lot of rifle elk hunters, which can really increase competition during the any weapon season. More opportunities for backcountry backpack style hunting can be found here for hunters looking to distance themselves from the competition. This will help hunters find older bucks. Wolves continue to be a problem in this area during winter months though hunting and trapping efforts have somewhat curbed hunter-wolf altercations during the season. This area holds some of the highest concentrations of grizzlies and experiences the bulk of hunter and bear encounters. This problem is exemplified in areas immediately surrounding Yellowstone.

Region 4 is found in the north-central portion of the state and offers an incredible array of terrain, ranging from steep heavily forested slopes to sage-covered coulees in the Missouri River Breaks. The competition will be high in most areas though hunters can still find areas to escape deep into the backcountry. The northern part of the region features large expanses of private land, which can make access difficult though some great bucks can be found here. On the western side of the area, hunters can hunt the famed Rocky Mountain Front, which features breathtaking scenery, very rugged country, and excellent mule deer hunting. Grizzlies are also prevalent in this area and proper precaution must be adhered to. Predation on the western side of the region has been reduced again thanks to hunting and trapping efforts. The eastern side of the area tends to provide a better hunt for most hunters as deer can be glassed from a long distance making it much easier to find larger caliber bucks.

This region, located in south central Montana, generally produces smaller bucks compared to the rest of the state; however, some great deer are taken every year. Large ranches found here will hold large populations of the deer and competition on the public lands surrounding these areas can be tight. On the southern end of the region, hunters can find access into the Custer-Gallatin Forest, which can provide ample amounts of country to escape crowds. Be aware that getting into the backcountry can be very physically demanding and game densities are very low.

Region 6 is an area that will see large amounts of hunters heading into the famous Missouri River Breaks through some incredible hunting can also be found in the surrounding districts. Private lands dominate much of this area though sections of BLM land can provide hunters with great opportunities to escape the crowds and search for pockets of unpressured deer. The terrain here is mostly comprised of rolling hills with pockets of heavy timber and sage-covered coulees. Glassing is king in this country and optics will play a pivotal role in success for anyone hunting here.

One of the most popular regions for mule deer as it possesses the highest population of deer, this area will experience lots of pressure from other hunters. Pay close attention to sections of public land within the sea of private ranches; this can provide hunters with great opportunities to find mature deer. While most hunters will be seeking mule deer, there is some great whitetail here, too, with some bucks even reaching the 140” mark.

The graphic below is one I'm interested in pointing out. Each year I always hear grumblings from residents saying that nonresidents are taking more and bucks and are impacting the hunting.

So after reviewing the graphic, it should go without saying that couldn't be further from the truth based on the nonresident license cap and the over-the-counter resident tags. But the graphic above also showcases the trends in the number of mule deer taken each year by residency. It should also be noted that I was a resident of Montana for a large number of years and rarely had a nonresident impact my hunt.

The above graphics have some interesting things to point out. It seems that residents have a distinct advantage of taking bucks in Regions 1 through 5. And then the nonresident pressure on bucks increased in Region 6 and 7.

The graphic below is also very interesting! When you just look at the number of 4 point or better mule deer by residency, you'll quickly notice the popularity of Region 7 for potentially older age class bucks. Especially by nonresidents where it is almost a 50/50 split. So the nonresident pressure for older deer is very high when compared to other areas in the state.

So what about the number of points on each antler? ie. older age class bucks?

Montana is a great state for mule deer hunting opportunity! While it might not rank as high as other states in the total number of B&C caliber bucks, but the opportunity to hunt is pretty much endless. For even more information, be sure to check out our 2019 Montana deer application strategy article.