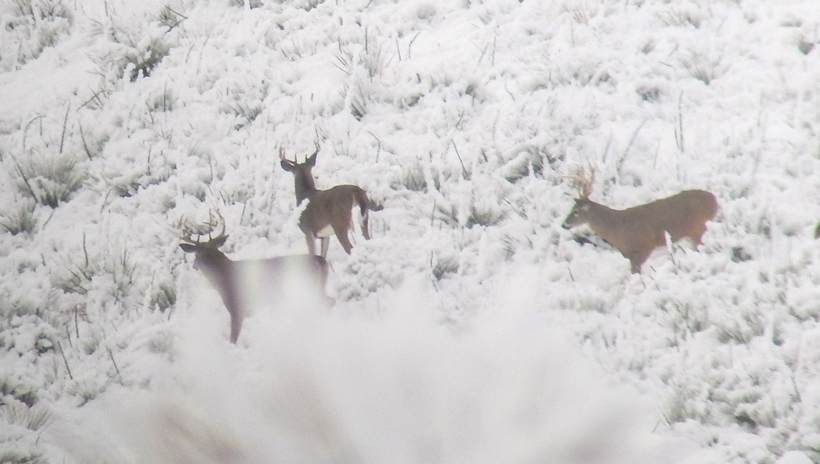 The fall is over and cold winter temperatures are headed our way. With the exception of a few late whitetail seasons and some desert hunting down south, most of the hunting seasons in the west are ending. The whitetail rut has come to a grinding halt as cold temperatures and snow are now pushing deer to concentrate on food sources. The late season can be a frustrating time to hunt mature bucks, but with a little hard work and some persistence, the late season can be your most productive hunt of the year. Below is a look at some of the key factors you can try to capitalize on for these late season hunts.

Whitetails are creatures of habit during the late season. Mature bucks typically frequent the same bedding and feeding areas. Depleted from the rigors of the ruts, bucks need to refocus their energy on finding food sources that will enable them to survive the stress of winter. This means that locating mature bucks can be as simple as locating good food sources.

Proper scouting is another key to your late season success. What do I mean by this? The key to the late season is locating a buck without him knowing you’ve located him. Catching a fleeting glance of a buck as you bump him from his feeding area typically won’t work. Bucks are extremely sensitive to pressure during the late season and unnecessarily pressuring a buck can cause him to become more nocturnal or switch food sources (effectively putting you back to square one). Your long range glass and trail cameras should be utilized as much as possible during this period. Locating your buck is the first step. Once located, setting up a plan to hunt him is the next step.

Once a buck is located, a number of approaches can be taken to get you within shooting range. Treestands and ground blinds can work great in this scenario but aren’t always necessary. Being mobile and able to move quickly to capitalize on whatever wind direction the late season throws your way can be crucial. The biggest mistake you can make is pushing a questionable wind. The less the deer you are hunting knows about you hunting him the better! This, of course, works much better if you are gun hunting.

For late season bowhunts, focus on placing a number of treestand and ground blinds around the food source and along the preferred travel corridors. Hunt these stands very conservatively and focus on hunting during a good crosswind.

Locating a buck from the rut

Every year, it seems like I am trying to relocate a buck that I found during the rut for a late season hunt. This can be extremely difficult as bucks will move great distances from their rutting area to seek good late season food sources. Sometimes bucks move to a totally different geographic area that relocating them during the late season simply isn’t possible. Whenever I am looking for a buck I located during the rut, I start by checking all the food sources within about two miles of where I saw him during the rut and then gradually work my way out from there. The odds of relocating the buck aren’t always in your favor. The worst outcome here is dedicating a tremendous amount of time trying to locate an animal that is miles away. It is best to not overcommit to finding such a buck. 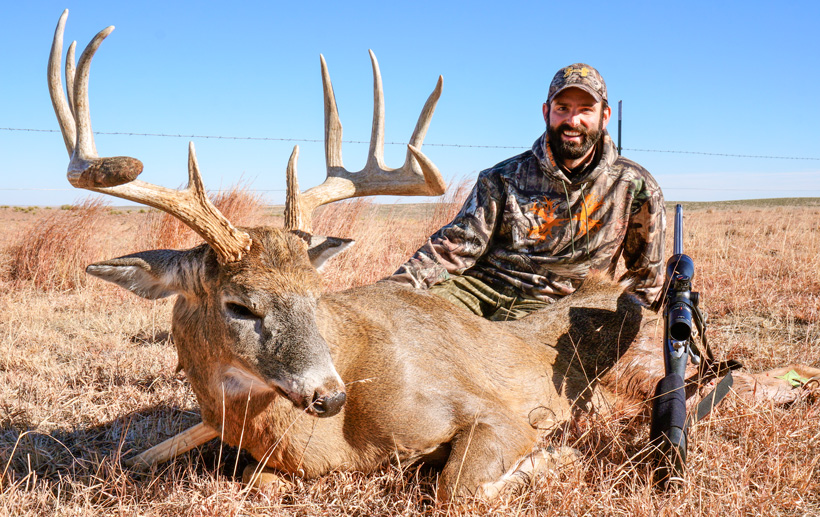 Lucky buck: This buck rutted over seven miles from where we harvested him late season. We had no idea where the buck relocated to for the late season. Sometimes it’s better to be lucky than good.

Another key to late season success is weather. Warm weather can decrease daylight deer movement and keep deer spread out on a variety of food sources. Keep your fingers crossed for cold temperatures and storm fronts. Should warm weather strike, hope is not lost, but a slightly different approach may be needed.

The dreaded hot spell: Warm weather doesn’t have to be the kiss of death to your late season whitetail hunt, but it will dictate that you take a slightly different approach to your hunt. The warmer the temperatures the more likely green food sources will still play a key role in deer movement. Should you find yourself with excessive heat on your late season hunt, do not discount the importance of green crops such as wheat, bulbed greens (turnips, etc) and alfalfa. These green food sources may be what harbors the mature buck you are after. 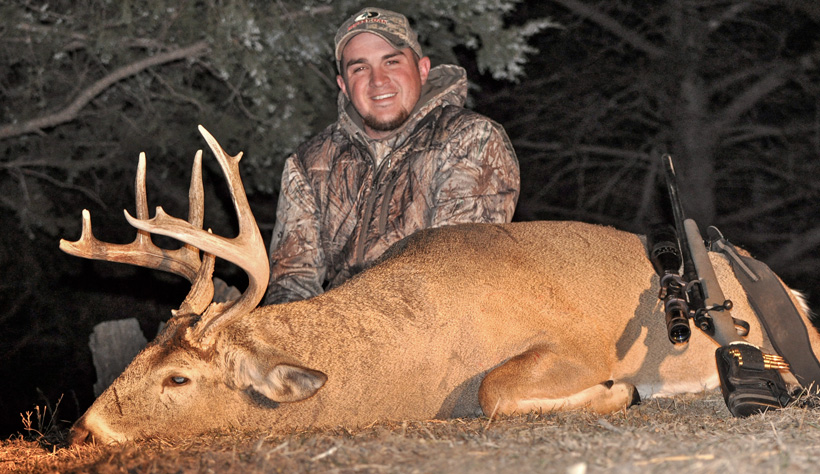 Stephen Spurlock with a warm weather buck. It's relatively rare that we take late season whitetails on water, but, in 2012, warm temperatures made water extremely valuable during the late season.

It is undeniable that warm temperatures during the late season typically yield less daytime deer movement than would occur in frigid temperatures. That being said, mature bucks will still move some in the daylight. The difference is that the warmer the weather, the less likely you are to catch a mature buck on his feet a great distance from his bedding area. Warmer temperatures dictate you to hunt closer to bedding areas and focus more on staging areas than on the food source itself.

Cold winter weather dictates a slightly different approach to the hunt. Frigid temperatures will generally concentrate deer on high carbohydrate producing food sources. Across the whitetails’ western range this typically means corn or soybeans. Both of these agricultural commodities provide whitetails with the energy source that they desperately need to survive the winter. Also, cold weather typically results in more daytime deer movement. 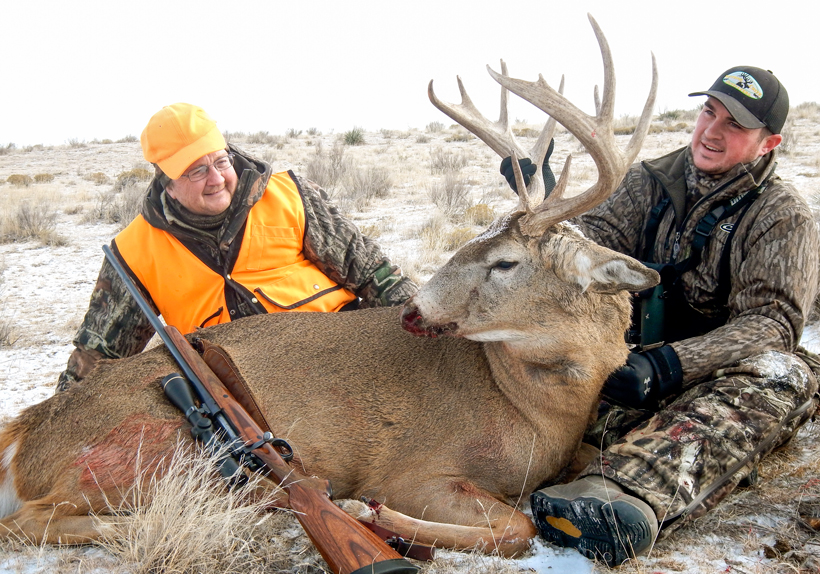 Other keys to late season success

As indicated above, the number one factor that will make you successful during the late season is scouting. Beyond that, success is predicated upon seizing the opportunities when they present themselves. Late season hunting is a lot of sit-around-and-wait, but once a weather window presents itself or a buck slips up and beds in an area that makes him vulnerable, switching from playing it safe to being aggressive is crucial. Here are some circumstances that, if presented, should warrant some aggressive maneuvers.

Cold front. Anytime you see a weather event in the forecast during the late season, there are two key periods you should focus on: before the storm and after it. If you hunt just in front of the storm you are likely to experience some east wind or another wind direction that may not be typical for the late season. Utilize this change in wind direction and temperature to approach a buck from a direction you aren’t normally able to. Additionally, the period directly after a storm clears typically results in the greatest amount of deer movement possible.

Key in on abrupt pattern or movement changes. Bucks are extremely habitual this time of year. If your buck abruptly changes his pattern during the late season, he may find himself in a very vulnerable position. This abrupt change may be the result of being bumped by a rancher, a major change in bedding area or a momentary change of food source. If you see a buck make a major change, take a look at wind direction and his usual travel corridors. You never know — you may find yourself well within shooting range. Switching from a grain food source to a green food source is also not uncommon during the late season. Be sure you are prepared for this shift as bucks may move to green food sources if temperatures heat up. 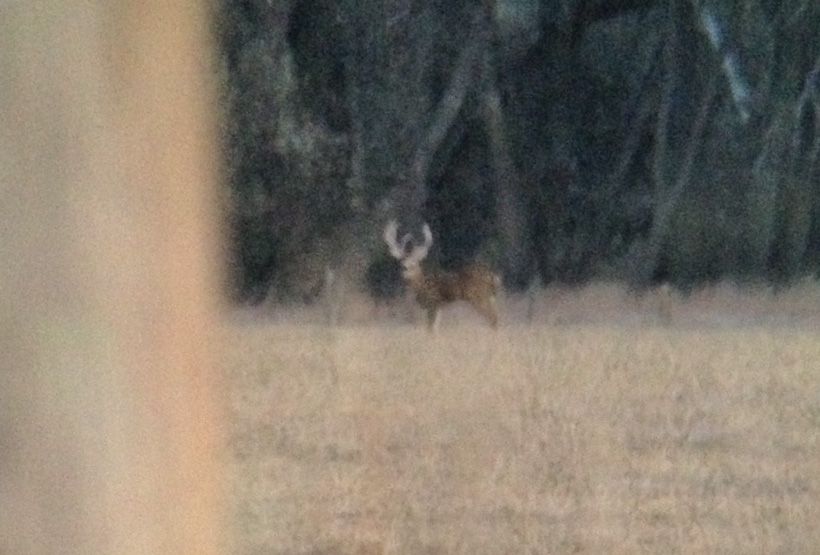 A live photo of the bent browtine whitetail buck. 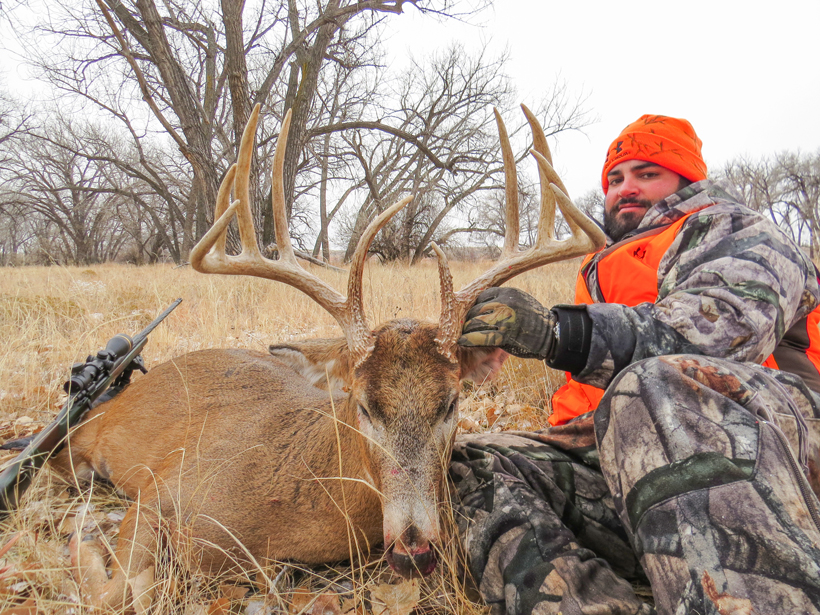 The bent browtine buck. This buck shifted his late season feeding from a cornfield to a nearby alfalfa field.

If you are lucky enough to find yourself afield during this late season, be sure to approach your hunt conservatively and scout diligently. The late season can be a great time to tag a mature buck! Good luck!

Great advice on deer switching from green food to grain when it gets colder, and shifting back during a warm spell.