Making the switch from rifle to archery 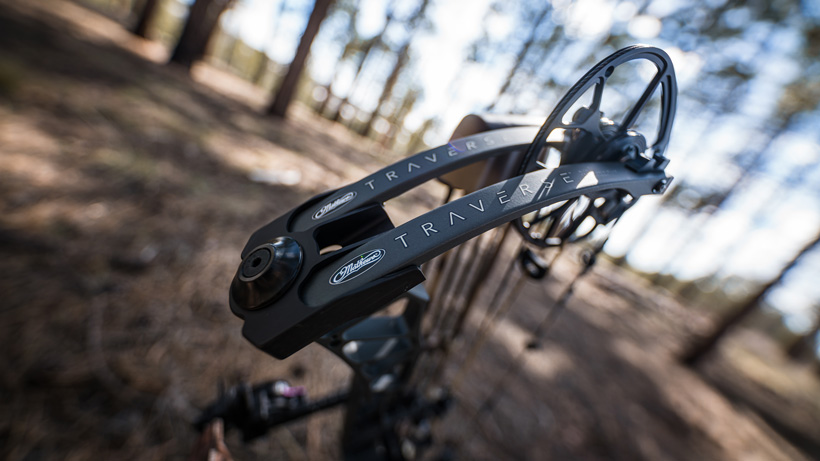 “More time in the field.” That is something I read years ago over and over again in our local game and fish regulations. They were talking about archery hunting and the opportunity it held. Archery hunts are notorious for being longer and more widely accessible than rifle hunts. It’s just harder, so the states can afford to let opportunity reign were it may without the worry of game populations plummeting. They know that all of the tags aren’t going to be filled. Being a rifle hunter at the time of reading this—and not a good one might I add—the thought of making things even harder perplexed me. To me, bowhunting was this thing that only a select few individuals were crazy enough to do and, when they were successful, in my eyes, it was probably all luck. As I sit here today, a bowhunter through and through, I shake my head. My take on bowhunting couldn’t have been more wrong. Making that switch from rifle to bow can be a hard pill to swallow, though. Here are some things that stuck out to me when I did so. 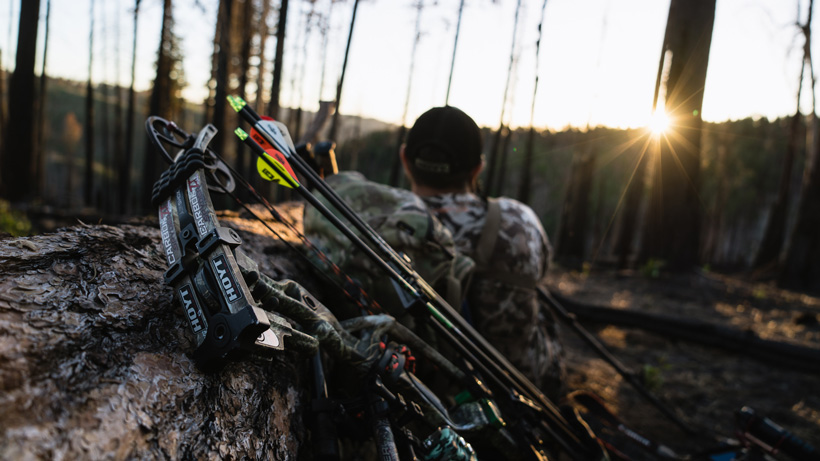 Every adventure starts at the beginning and making the switch from rifle to archery is no different. First things first: find an archery pro shop. I’d highly recommend that you take yourself over to one of these and talk with them. There are also the big box stores, but, honestly, you never know who you are talking to at those places. The person may just be an employee, rather than a bowhunter. In pro shops, you are talking to the real deal. Most of these people are dedicated bowhunters who are willing to sit and chat with you for hours about the subject. When you’re passionate about something, it’s quite easy to do that. They are going to be able to point you in the right direction for what bow is going to work the best for you and your needs. That brings me to my next point.

As for the bow, you really don’t have to go crazy here. Seeing what we see on social media can make it quite easy to think that you need to spend a small fortune on a bow and accessories. If your wallet is hard to sit on, then, by all means, go crazy. At this point, though, you don’t even know if you are going to like bowhunting or not. So, don’t be afraid of going with something that is a mid-tier level, a few years old or, even, a used bow. There are some great deals to be had out there. Some folks will buy a new bow every year, so used bows are pretty easy to come by. These are going to do the job just as well as that new $1,700 model. 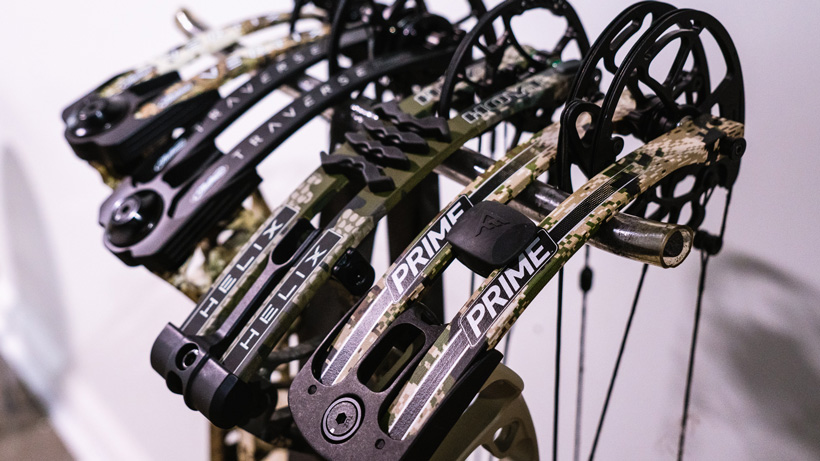 Regardless of the price tag that came on your bow, the real exchange needs to be paid in dedication. Bowhunting is an art and the only way to get good at it is to start “painting.” With time and dedication, you’ll be able to paint a pretty cool picture. This all needs to start with your shooting and form. Building a solid foundation on shooting is crucial to being successful both on the range and in the field. If you are starting from absolute scratch and have nobody to help out, I’d really recommend seeing a coach. Even if it’s just to get you shooting the correct way right off of the bat. Once you build bad habits, it’s really hard to break them. By learning right the first time, you won’t know how to do it wrong.

Once you are feeling proficient with shooting a bow, the next form of dedication is going to be actually hunting with it. Just like anything else out there, hunting with a bow is just a decision. It is you committing yourself to a new challenge and, let me tell you, bowhunting is a challenge. The contrast between rifle hunting and bowhunting is a stark one. A different game and that game is hard to keep playing when losing outweighs winning by quite a bit, especially, if you were used to consistent success with a rifle. In bowhunting, failure is imminent. It’s just going to happen and it will happen over and over again. A hunter needs to push through this and keep learning. The easy thing to do is to go pick up a rifle again. Picking back up the rifle isn’t going to make you a better bowhunter, though. Bowhunting is, so keep at it. 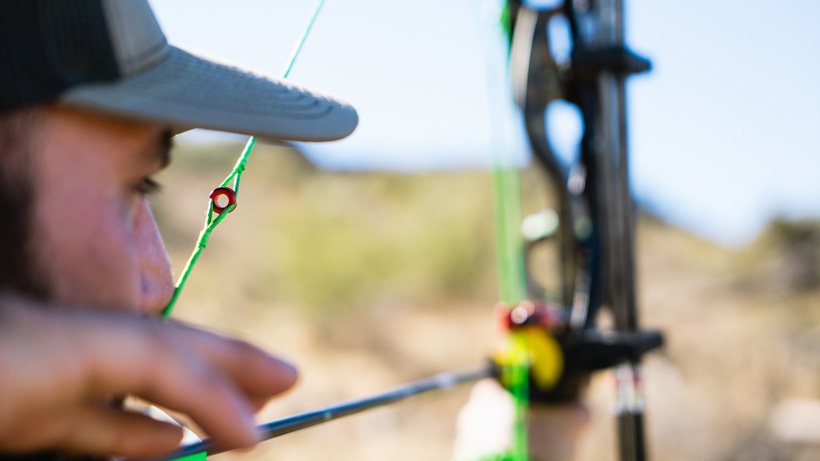 When I started bowhunting, one of my issues was that I kept thinking like a rifle hunter. Please, let me be clear. I’m not downplaying how a rifle hunter thinks at all. The fact of the matter is that they are two completely different methods of hunting. So, I think they need to be approached differently. Since I’ve started bowhunting, the way that I look at the country has changed. In the past, I’d just find a high point where I might be able to shoot my rifle from and post up there. I found success in doing this. There wasn’t any concern with how to close the distance on various hills that surrounded me. The draw that may have led right to the base of a hill went right over my head. The line of trees that obscured the view of a bedded deer didn’t matter. Shade lines didn’t exist either to me. Neither did my awareness of how steep something might be when I got there. Why do I need to know that stuff when I can just shoot right from here? All of these things matter in bowhunting because we need to figure out how to close the distance. If there isn’t an approach, there isn’t a shot to take. Of course, I am speaking about spot and stalk hunting here. Certain country just isn’t stalkable and that’s where ambush hunting comes into play.

The years I spent sitting up high and ambushing animals from afar never caused me to really think about how to ambush them from bow range. This changes things for sure and I think where scouting comes into play way more. Focusing animal movement to a certain area takes time to learn. Learning game trails and active water holes is key for success on ambush hunts with a bow. Knowing where the animal is going to be before they are there is the goal here. Once you do find that, picking a spot to post up is also an art. Using a backdrop to break up your outline or obscuring the animal’s vision from you as they approach are things that you need to consider. Then there is the wind. Ah, the wind. The end all be all. Don’t forget to take that into consideration whether spot and stalk or ambush hunting. Not being seen from 300 yards away is fairly easy. Not being seen from 30 yards is a different story. 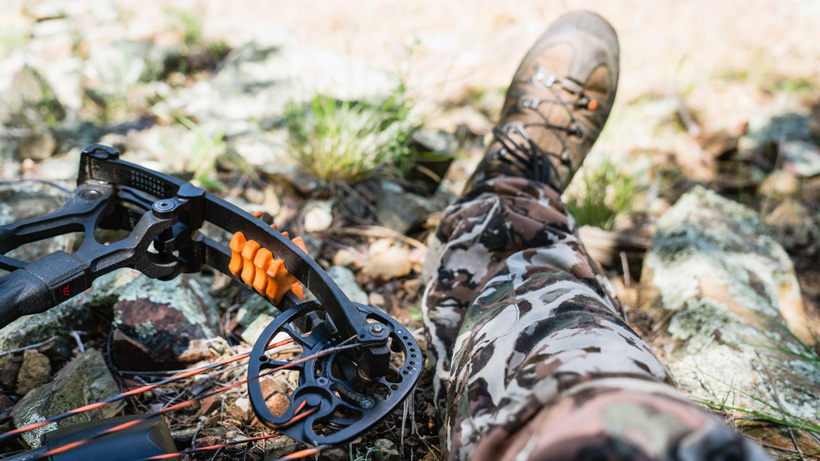 While bowhunting might come with a lot of frustration and questioning your sanity to do so, there is something else. That something else is the reward or, rather, rewards. There is absolutely nothing like coming to full draw on an animal and watching your arrow disappear through the hide for the first time. That moment is when it hits you that it was all worth it. All of the work and hours you put into shooting your bow and scouting. The failed stalks and lessons that came with them. All of those “almosts” finally amounted to success and breathing that feels good. A potent and profound feeling of accomplishment seems to come with every animal that will fall to your arrow. Hunting with a rifle is completely fine and I encourage people to do it. There is just something different about a bow, though. The only way for that difference to come to light is to try it and experience it for yourself. 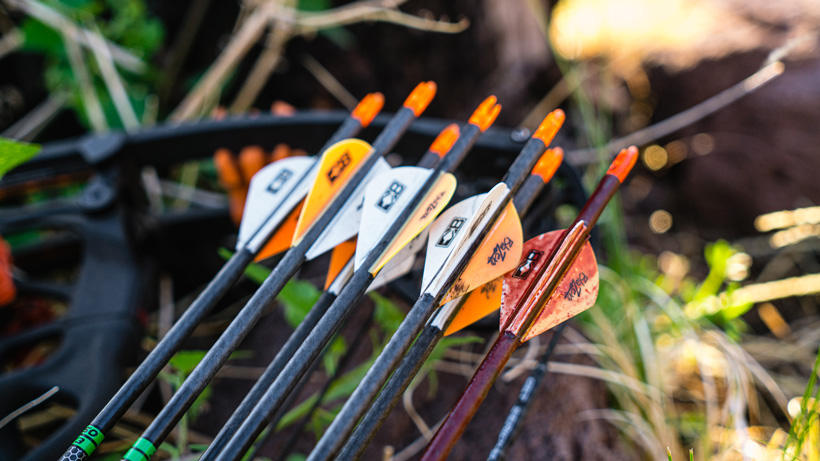 Just this last spring I was watching a big boar black bear feeding on grass out in the open. He was so big that he had to spread his front legs apart so that he could reach the ground to eat. An hour later, I found myself up on the bench the bear was on. Without having a visual, I crept through a shaded pocket above where he was feeding in hopes of turning him up. Then I heard rustling 6’ to my left. The bear was curled up in a ball sleeping and I had disturbed him. After dang near kicking the dirt beneath him on me, the boar trotted out to 10 yards. I came to full draw but had no shot due to branches. The bear then trotted out of my life never to be seen again. Before this, I was teetering with using the rifle for this hunt. Had I done that, though, this experience would have never been given to me. After that bear ran off, I looked at my brother and said, “That is why I love bowhunting.” There are way easier ways to do things than archery hunt and making the switch to archery may be arduous for some. However, I assure you what you get out of it is so much more than a full freezer.

I am so pumped for you! You've got many "firsts" ahead and there is nothing like those. You're walking into this with a great perspective. Expectations for an adventure and experience rather than a trophy animal. Love that. Thanks for the kind words and best of luck to you as well!

Josh, thank you for the nice article that really puts thing in perspective. I began hunting VERY late in life using a rifle and have hiked with a bow the past 4-years. I came from a non-hunting family and as such do not have the knowledge most of you have. I just enjoy being out there and found your article particularly refreshing. Heck, I only rifle hunted for a couple of years and had limited success so my expectations for archery is to just enjoy the challenge and experience of trying to find animals then get close.
I wish you all the best of luck as you prepare for this season.

So great to hear that Nick! You definitely don't have to be a professional archer to be a successful bowhunter. That's the truth. Love that you see it as a stress reliever, as I do the same. There's just something nice about shooting a bow, whether that is at a target or a live animal. Good on you for not complicating things with your gear choices. So much can go wrong out there, so this is an area that we can actually control. Best of luck out there to you and your oldest this season!

I did this last year. My oldest was able to hunt and thought we should try. Im so happy I did. In my state with the right tag you can do all the weapons. I shoot in my back yard, which is really stress relieving. However, short of the equipment, an archery mentor explained it best. " Im not great at the 3d, or target shoots, but I know how to hunt". I followed his advice on keeping things as simple as possible( whisker biscuit, fixed broadheads, easy shooting vs fast bow). Im not a 80yrd sniper, but I surely have enjoyed the process.