Level up your next archery hunt 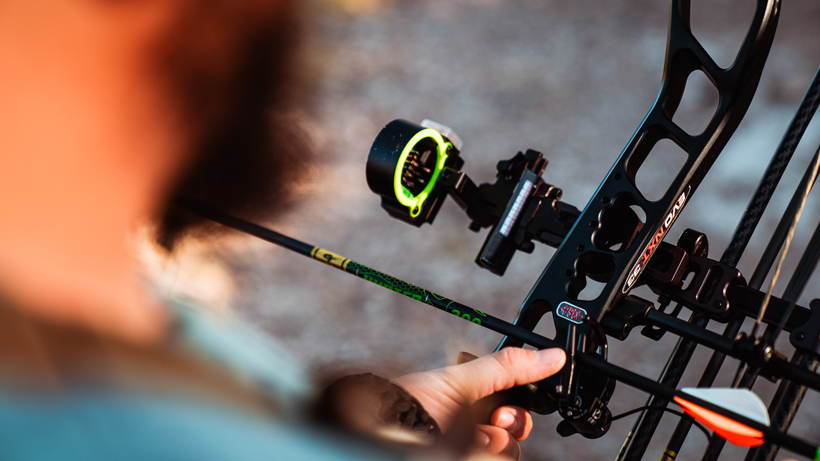 Throughout the years, I have seen in others (and experienced on my own) more failures surrounding bowhunting than I can even recall. Whether it was an equipment malfunction, a lack of practice on the range or simply getting served by Mother Nature, bowhunting is no easy task. Quite frankly, the roadblocks to success often keep many out of the winners’ circle and serve up a plethora of tag soup. Eating tag soup doesn’t have to be the norm though. Even though bowhunting can sometimes feel impossible, there is always a way. We just need to make sure that our ducks are in a row and be prepared to deal with some adversity to push through. Let’s dive into some things that will surely help you along the way to success in archery hunting.

Is your bow tuned? 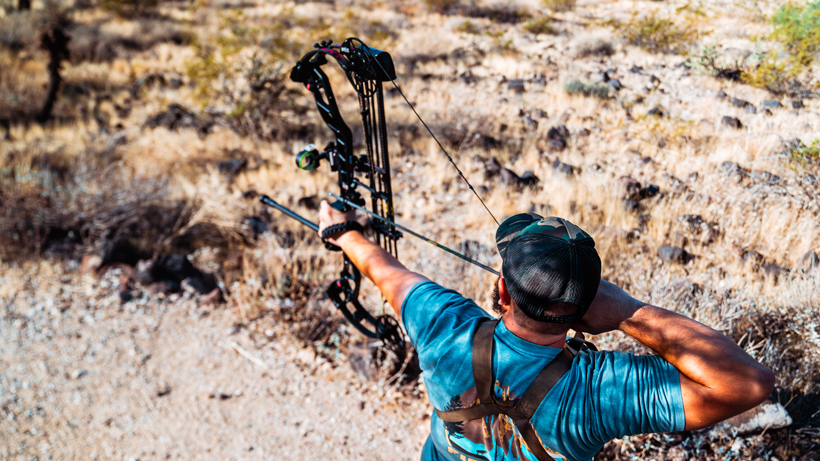 Before even heading into the field with your bow, it’s vital to make sure that the dang thing is tuned. It’s surprising how many folks out there don’t even know that this is a thing. They pick up a bow off the shelf or order one online, throw a few accessories on and are off to the races. While I wish it were that easy, it really isn’t. So, let me briefly lay out what tuning a bow means. In a nutshell, we are trying to get your arrow to fly out of the bow as straight as possible. There are many factors that go into achieving this. Arrow spine, arrow speed, arrow weight, draw weight, rest position, etc. These, among more, all have an impact on tuning a bow. Why go through all of that? If the arrow isn’t coming out straight, then broadhead flight will suffer as will penetration at the end of the road. A well-tuned bow is part of the foundation of confidence in archery. It’s going to fill the coin jar with consistency and, in bowhunting, consistency is the name of the game. 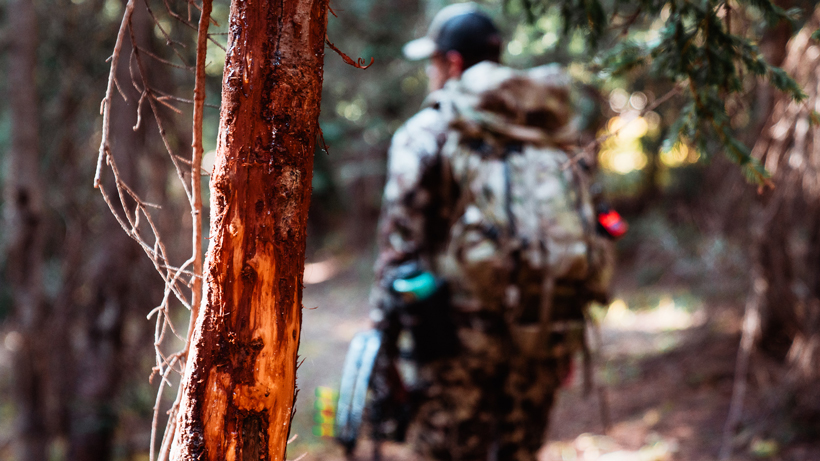 Along with making sure that your bow is up to snuff, take the time to work out the kinks in your shooting. Being successful with a bow is all about opportunity and, as archery hunters, we only get so many. Making sure that you are shooting laser beams before heading out will go a long way once in the field — not only in terms of accuracy, but also with confidence. Heading into a hunt with a lack of confidence in your shooting ability is a key ingredient in a recipe for disaster and disappointment. So, let’s just avoid that all together. I’m not saying that someone needs to shoot 100 arrows a day by any means. Heck, I’ve found just shooting a half dozen a day is enough to keep the muscle memory of it all. That’s exactly what you want too: keep that muscle memory. It’s what will take over when things get intense and what will end up sealing the deal.

Aside from practice itself, consider getting some coaching if need be. We take our bows into pro shops to get worked on and tuned up. Why are we, as shooters, any different? We’re not. Often, an outsider’s perspective is exactly what is needed to smooth out a chink in the chain that is our shooting.

Pay attention to the little things

The little things in bowhunting no doubt add up over time. How analytical one gets over this stuff is going to vary from hunter to hunter, but it’s all relevant. I’m referring to both what to keep in mind in the field, as well as gear. Stuff like silencing your bow. A lot of bows come with an arrow shelf that has absolutely zero padding on it. This means that an arrow can fall and easily make a clank noise as well as blow plenty of close encounter opportunities. Putting some adhesive padding on areas like this will help keep it silent. Areas to note are the arrow shelf, the riser right above the arrow shelf, the bottom of your sight housing, and the part of your quiver that faces you when holding your bow at the ready. All of these areas are prone for either an arrow to hit or a thumb button release to knock, if it’s left hanging on the d-loop. So, whether we’re talking about a bow or some other gear item like a bino harness, if it’s a weakness, take care of it. The deer don’t care how much you paid for whatever it is or what company made it. 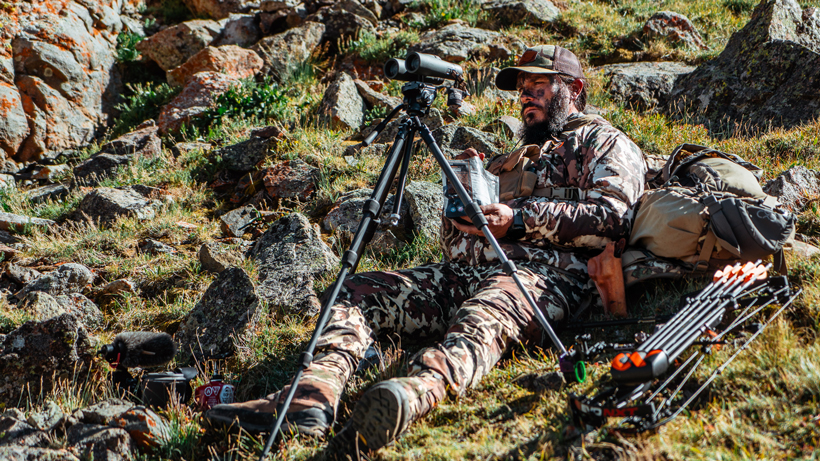 Let’s scratch the surface a bit on being in the field, particularly when it comes to spot and stalk hunting. This is a “walk on eggshells” moment for sure. From the type of footwear you are using to where you are placing that footwear on your stalk all matters. A softer sole boot is going to be quieter since it doesn’t fight the ground as much. And, with the ground, take note as you’re walking around of what makes the most noise. You might notice that moving through a certain type of grass is dead silent while another type might be extremely noisy. I’ve always tried to place my feet on big rocks rather than small ones. Small rocks have more of a tendency to grind against one another, making more noise. The big ones don’t do that and are much more silent. Another thing to remember as you’re moving towards an animal, especially if they have the ability to turn and see you, is your direction. Moving straight at an animal, instead of making a bunch of lateral movements, will be much harder to pick out. Versus if a hunter is moving sideways, that type of movement sticks out like a sore thumb. Sometimes, lateral moves are unavoidable, but if you don’t have to make them, then don’t.

The relationship between failure and bowhunting can be described fairly accurately as two peas and a pod. Successful bowhunters are good at filling tags, but they’re also even better at pushing through these failures — if you want to call them that. In all reality, though, they aren’t failures at all. They are merely more pieces to the puzzle. Each failed stalk or encounter has a lesson that rests in it somewhere. Realizing what those are will put you that much closer to success. And the more hunters go out and do this stuff, the better prepared they’ll be able to mitigate issues before they happen. However, it definitely stings a bit when something doesn’t work out — especially if it was a miss. It’s not hard to understand why that type of situation hits so hard. After all of the strenuous work you were mere inches away from success. A person can look at a miss in a negative way or they could go a more positive route. One, at least you didn’t wound the animal. A clean miss is better than that. Two, now you absolutely know that success is within arm’s reach. It was just a matter of inches as bowhunting usually is. Close that small gap and you’re golden. 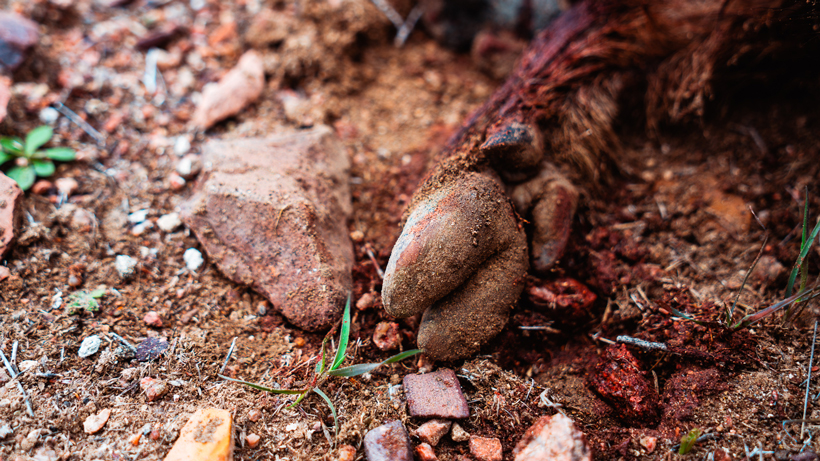 Murphy’s Law states, “Anything that can go wrong will go wrong.” Murphy must have been a bowhunter because that describes archery hunting to a T. Sometimes, it feels as if the stars have to align in order to fill an archery tag. While the ride that is bowhunting might come with more bumps than desired, the end is so worth it. It’s that full circle moment when all of your hard work beforehand hits you like a brick, when keeping your ducks in a row before season paid off, and when you fall in love with bowhunting more than you knew you could.

The bow life is a good life.

Here are some important tuning articles you might find helpful: