Hunting in grizzly bear country: Safety after you get an animal down 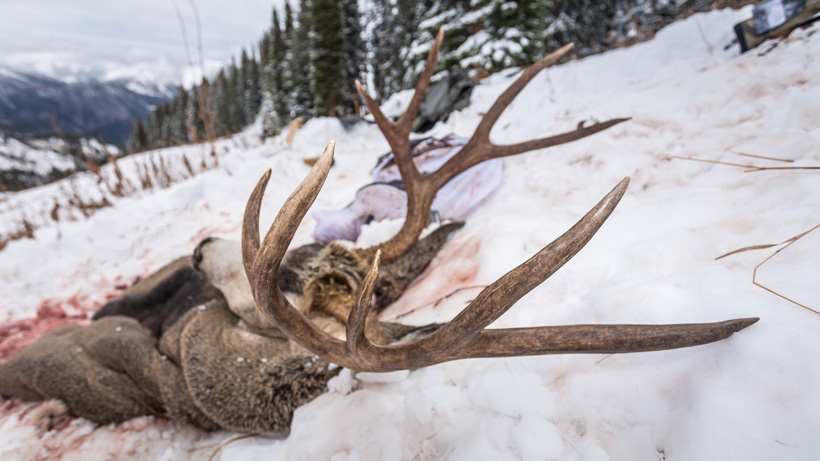 Safety while hunting in grizzly bear country is very important and even more so after you take an animal. Photo credit: Brady Miller

In our last article, we covered tactics for selecting safe campsites and managing your food while hunting in grizzly bear country. With a good understanding of how grizzly bears will move through a country and how to prevent any surprise encounters, it’s now time to shift your focus to the end goal of the hunt—successfully punching a tag. If your favorite freeze-dried dinner is sure to attract a bear then 80 lbs of boned-out elk meat neatly packed into a convenient to-go bag is sure to bring any hungry bear in on a string. While skinning, quartering and, eventually, packing an animal in grizzly country can be daunting it can also be done safely with careful attention and a solid game plan.

In the following article, we will explore several aspects to consider after an animal is down and how to protect your hard earned protein and your own well being. 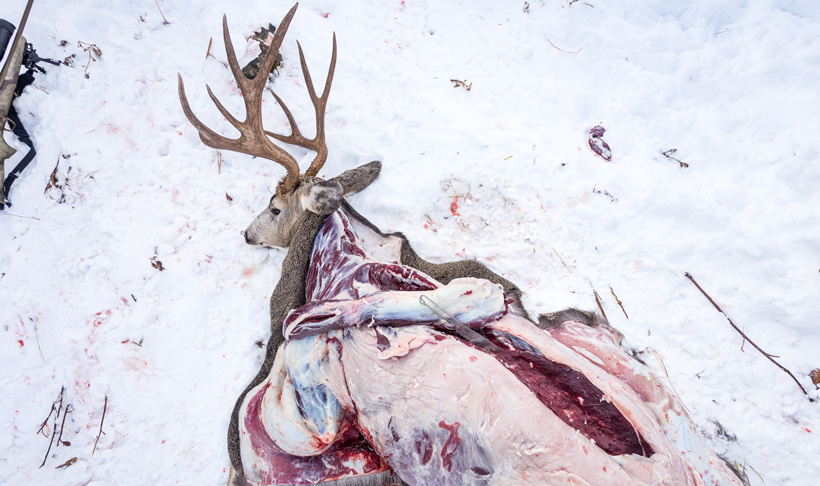 When it comes to breaking down an animal in grizzly bear country there are several areas that hunters can focus on to minimize scent and maximize safety. My preferred method for breaking down any animal while in the backcountry, grizzlies or not, is with the gutless method. For those who do not know, this simply entails removing the rear quarter at the hip joint, the entire front shoulder and, then, the back straps, tenderloins, brisket, neck, and scrap meat as individual pieces. This is not only a huge timesaver as you are no longer removing the animal’s internal organs, but it also greatly reduces the amount of blood you will encounter. Additionally, surgical gloves can almost entirely eliminate any blood getting on your hands and arms.

When hunting with two or more people, it’s always a good idea to have one person who can play lookout and periodically scan the area to look for any incoming trouble. When hunting solo, it will imperative to take a break and a look around every few minutes or so. In this situation, bears will typically approach from downwind as they are simply being led by their noses though this may not always be the case. Gun shots have been known to attract bears to an area acting as a dinner bell of sorts. The truth here is that constant vigilance in needed and everyone in the party must be prepared for a surprise encounter at any time. When packing spray or sidearms, it will be important to keep these items with you while working the animal. Bear defense gear will not be of any help when it’s securely strapped to your pack and lying several yards away. A Wyoming guide and hunter were surprised by a bear attack in the fall of 2017 while field dressing a cow elk when the bear suddenly attacked the hunter and was eventually fought off by the guide. Thankfully, both hunters survived the ordeal with a few severe injuries, but the outcome could have easily been much different.

The bottom line to consider here: try to reduce the amount of blood contact with your body and clothing while quartering the animal and remember to keep your head on a constant swivel. Bears can be incredibly quiet when they want to and one could easily pop up inside of your comfort zone before you know it.

Out of sight, out of mind 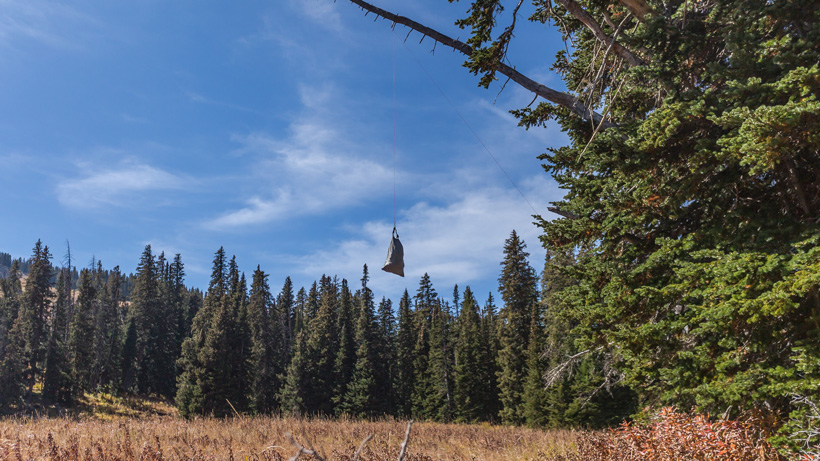 Hanging meat well above the ground and away from trees. Photo credit: Brady Miller

Once all of the quarters and trim meat have been removed from the animal, the next step will be moving all of the meat away from the kill site. Bears and other predators will often key in on the softest and most digestible portions of the animal first, such as the internal organs. While they certainly won’t pass up a bag of meat, the odds of having bear issues on your hard-earned prize will be lessened with some separation. First, consider the terrain and ground cover in the area. Look for areas where the scent of the meat will not be carried back down to the carcass due to thermals and prevailing winds. Often times, moving over a small finger ridge or laterally across a face will be plenty sufficient. Terrain will also dictate how far you’ll need to move the meat. Sometimes it may be only necessary to move 100 yards and, other times, 300 yards may be needed. While not always possible, the best case scenario would be to hang the meat as high as possible until it is being packed back to the camp or the trailhead.

As an added bonus, look for areas that can be glassed from an adjacent hill or drainage. Observing your cache from a safe distance for ten minutes or more before entering the area can greatly reduce surprise encounters. Obviously, the amount of vegetation in the area will greatly dictate this, but this is certainly something I always look for in more open country. When approaching the meat stash, take it slow and make plenty of noise; talking amongst partners or even singing have been noted to work. Hunters have also been known to leave an article of clothing draped near the meat or to urinate around the area. These only increase the presence of humans and could deter any possible predators.

While packing large animals like elk on a solo hunt I much prefer to shuttle quarters instead of packing one load back to the truck and then returning for the next. When doing this, it will be important to keep in mind where your checkpoints will be located. Again, consider areas with a low wind impact and features that can be glassed from a distance.

It’s well documented that the gutless method will drastically reduce the amount of blood exposure while field dressing, which will, in turn, lead to less blood to get on your clothing, pack and other gear. Even with taking every precaution the simple fact is that you’ll never completely eliminate any and all contact with blood, that's just part of hunting. Scent control after the kill will be just as important, if not more so, than it was a beginning of the hunt. For this, packing a spare set of clothing specifically for these situations is never a bad idea. Those who are day hunting or camping from a truck will find little impact here, but hunters who are backpack hunting will now be faced with two major decisions: staying with camp and beginning the pack out the next day or grabbing all of your gear and what meat you can and heading for the truck with a plan of returning the following day. For those who are staying, it will be imperative that any and all bloody items stay well away from camp. 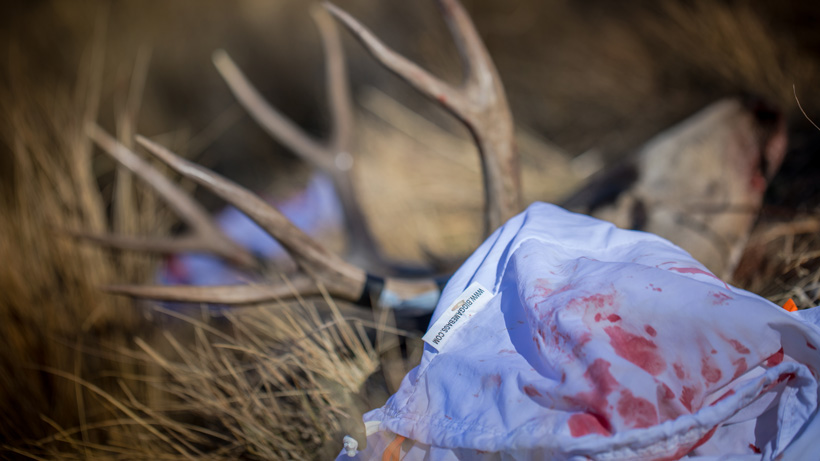 Your pack and gear can get bloody fast after taking care of meat. Photo credit: Brady Miller

Consider packing an extra dry bag for the sole purpose of putting any blood-soaked gear inside. Make sure it can be hung alongside your food bag. This will include game bags, clothing, boots, knives, etc. If you have camp shoes, use these to walk from the food/gear cache back to camp. Change into fresh clothes and wipe any areas of your skin that may have contacted blood with a baby wipe or something similar. Just like food, zero traces of blood should be making it back to camp. Additionally, you’ll likely have to leave your pack strung up with the bloody gear and food. Carry what items you'll need back to camp and do not return to the area until you resume your packing duties the following day.

Mark Livesay, the owner of Treeline Pursuits, is no stranger when it comes to spending multiple nights in grizzly country and, over the years, has developed an aggressive plan to reduce his presence while hunting in bear country. For the purpose of this article, I really wanted to dive into Mark’s strategy when it comes to field dressing game and asked him to break it down. Here’s what he said:

“Do not discount the increased risks associated with getting blood on your clothes, packs, and other gear. Blood scent is a real attractor, especially in the fall. Bloody clothes and gear in your tent could equal big problems. It’s very hard to stay blood-free when working up an animal, but it should be a big priority. While working up big game animals you want to stay as physically clean as possible. If it’s warm enough I almost always strip down to my boots and underwear. I take the belt off my pants and put my bear spray on my side. You NEVER want to be detached from that spray. This practice makes is much easier to clean up after. A blood-free hunter is a safer hunter.”

You read that correctly. During warmer months Mark will actually strip down to his underwear and work his animals almost completely unclothed. This may seem extreme to some, but it’s a surefire way to drastically reduce the opportunity of blood ever finding its way onto your clothing.

Formulate your plan of attack 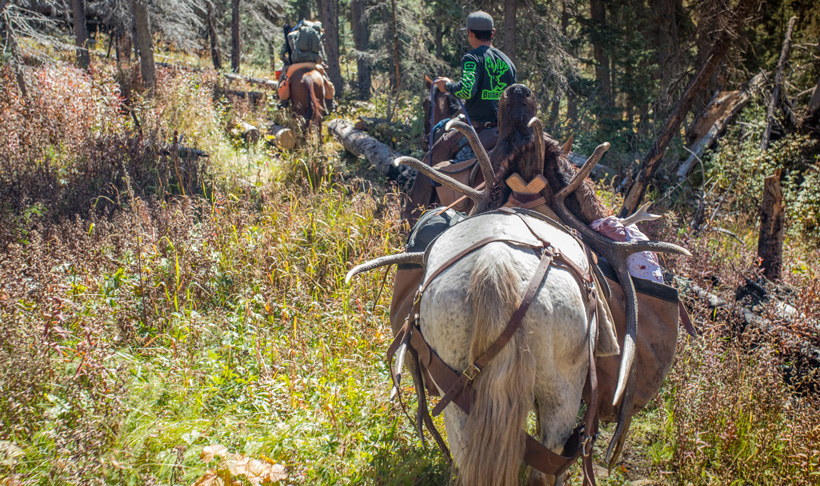 As with picking a good and safe campsite, hunters will find little change to the mental side of things when it comes to safely handling downed game in grizzly bear country. Keeping a level head and making good decisions will lead to awesome memories while hunting in some of the best country found in the West. Go through different scenarios in your head or with your partner(s) and discuss how you may handle different scenarios with handling meat and bear encounters. Having a solid game plan and establishing specific roles can minimize your time in the field with the meat, ease tensions, and greatly improve the overall experience.