How to preserve velvet antlers in the field 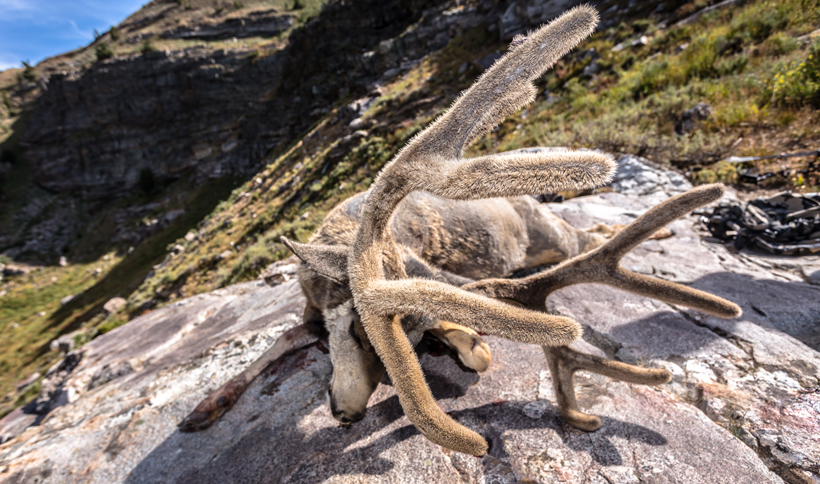 Velvet season is officially here. And if you’re hunting mule deer the next month and are going to be doing a backcountry type hunt, it might be a good idea to consider a way to preserve your precious velvet in the field. Getting the blood out of the antlers will help prevent the velvet from rotting. There are many different ways to preserve velvet antlers. What I'll be discussing here specifically applies to a do-it-yourself approach when you can't get the buck off the mountain for a few days or you're hunting with a friend and can hang the meat and rack while you continue to hunt. Some of the velvet preserve methods you can use are: formaldehyde, VelvaLock, Antler in Velvet Tan, 4 in 1 solution and plenty of other ways. This might seem like a complicated process, so if you're not comfortable doing this, it might be a better idea to rush your deer off the mountain and get it to your taxidermist so he can preserve the antlers with a preserving material or freeze-dry the rack. Also, you could poke small holes in the tips of the rack and hang upside down in a tree in hopes some blood will drain out. I know several people who just hang, and I've even seen their deer after they get off the mountain and nothing was wrong with their velvet before they took it to a taxidermist.

In my opinion, keeping the real velvet on a deer mount looks a lot better than fake velvet (and cheaper), so I always preserve velvet in the field.

There is another great solution to velvet preserve that is made by Velvet Antler Technologies and is their VelvaLok product. This product will, "pull all moisture from between the antler membrane and the actual antler. It literally "locks" the velvet on the antler preserving it for a lifetime. Furthermore, it removes all scent and repels all bugs during the process." It comes in a spray form and will preserve velvet in 72 hours.

Instructions for VelvaLok courtesy of their webpage:

1. Apply VelvaLok spray liberally to all velvet surfaces - saturate the antlers until the product is dripping down to the pedicles.
2. Make sure the tips of the antlers are elevated into the air so the base of the antlers are perpendicular to the ground plane.
3. Let VelvaLok sit for 72 hours - preservation time may vary. Results are typically seen within 72 hours but the actual duration may increase for very large antlers with unusual mass, those harvested in the late summer, or when applied and stored in 65°F or 18.3°C. 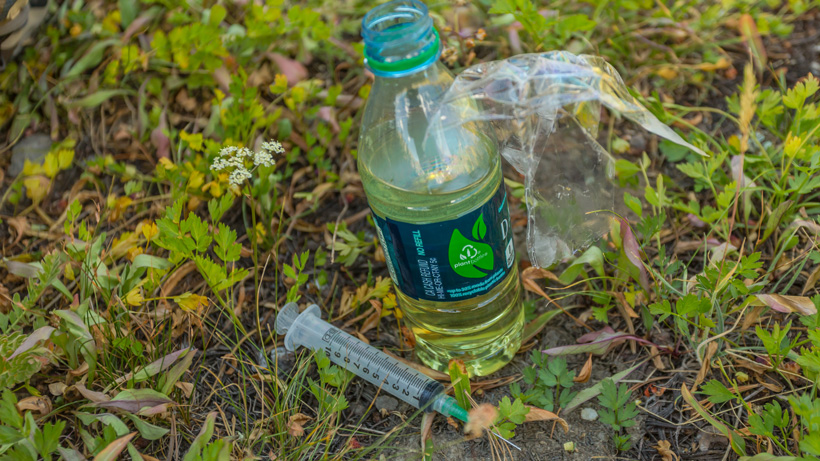 Below you’ll find the method that I’ve used that I learned from my taxidermist in California. Like I stated earlier, you could just puncture the tips of the antlers and let them sit in the shade upside down… but to me, that just seems like you could be asking for trouble because those small cuts could split open the tissue, attract bugs, and are likely to crack when dry.

Word of caution: No matter what method of backcountry velvet preserve you’re using (formaldehyde or others), ALWAYS wear eye protection and gloves. The fluid preserves whatever it touches, so don't get it on yourself. Working in the fisheries biology field background for so many years, I've seen what formaldehyde can do and it's pretty nasty stuff. 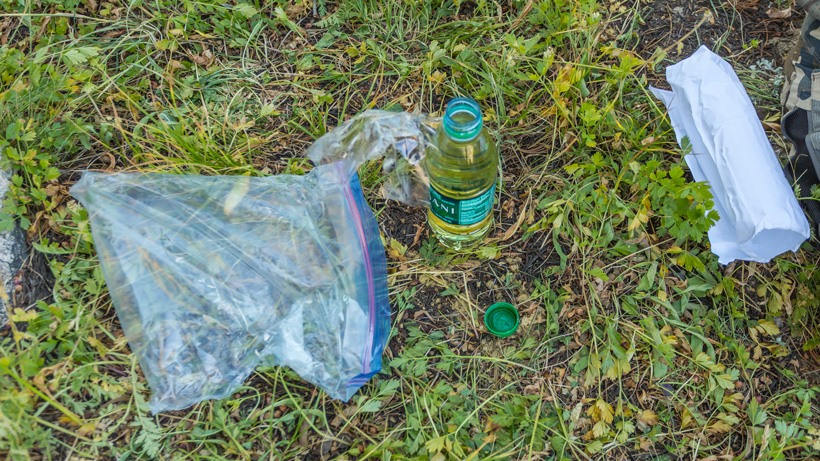 I prefer to use formaldehyde that I get in small doses from my taxidermist, but as stated earlier, you can use other "safer" methods. Put on a pair of rubber gloves (normally I double up) and toss on some sunglasses and take your knife and open the package containing your preserve material, syringe, and needle. I normally keep my preserve in an old plastic water bottle to keep weight down and then I wrap it in tons of tape so it won't open up and then I double Ziplock bag it. You can never be too careful!

Next, take your syringe needle (or knife) and make a small hole in each antler tine and even along some of the main veins that are visible along the main beam. This is a step that will aid in getting your preserve through the veins and to go out the tines. 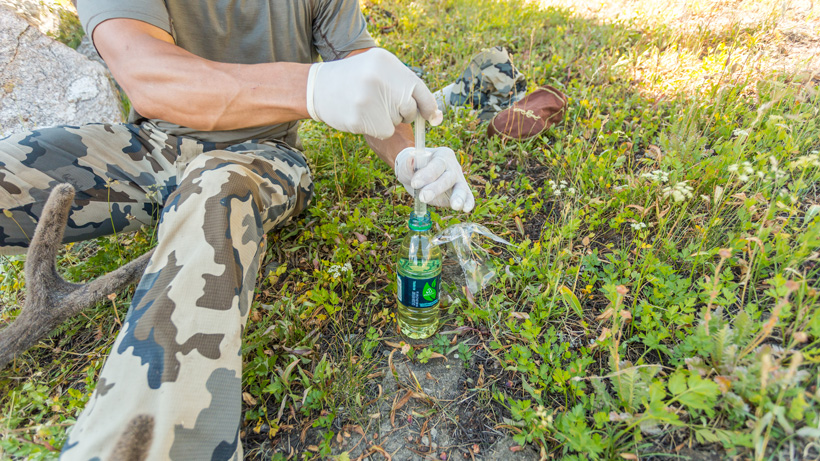 Take your syringe and pull up some of the solution. I always begin by starting the injection at the bases near the skull and work toward the tips, but you can start anywhere on the rack. Start injecting some of the material into each vein channel. Then work down the main beam and inject it into the middle of veins. You'll know you're doing it right when you start to see blood and velvet preserve solution come out of the small holes you poked in the veins or it will start to come out of the antler tips. This is why my taxidermist mentioned the importance of poking the tines to start. 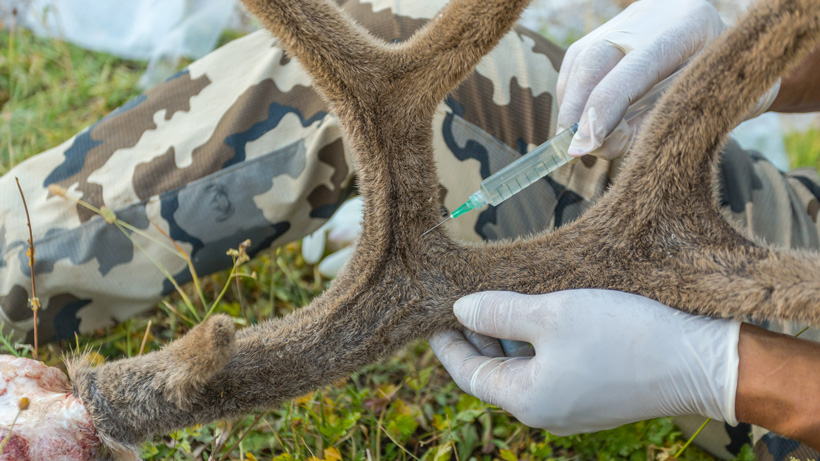 You'll be able to visually see the veins and where to inject, or you can use your fingernail and move it down the antler until you find a vein that is going horizontally across the beam. I like to go top down on the back tines due to the veins having a lot of blood in this area. Then I'll repeat the process and try to get the solution to go out of the tips instead of toward the base. 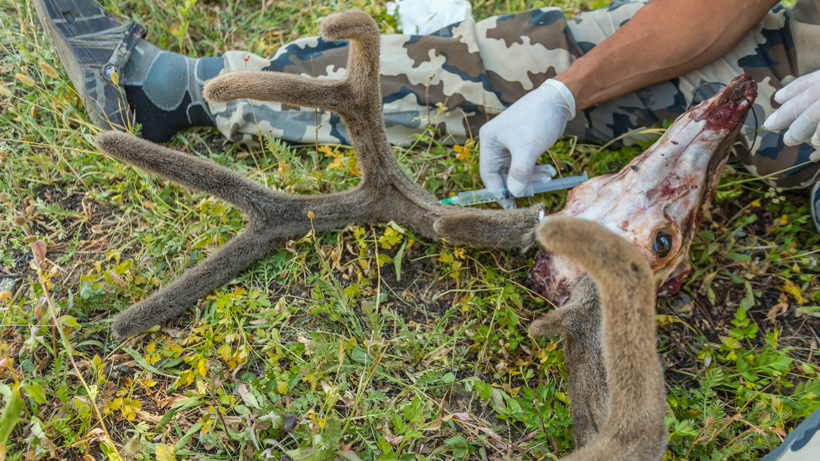 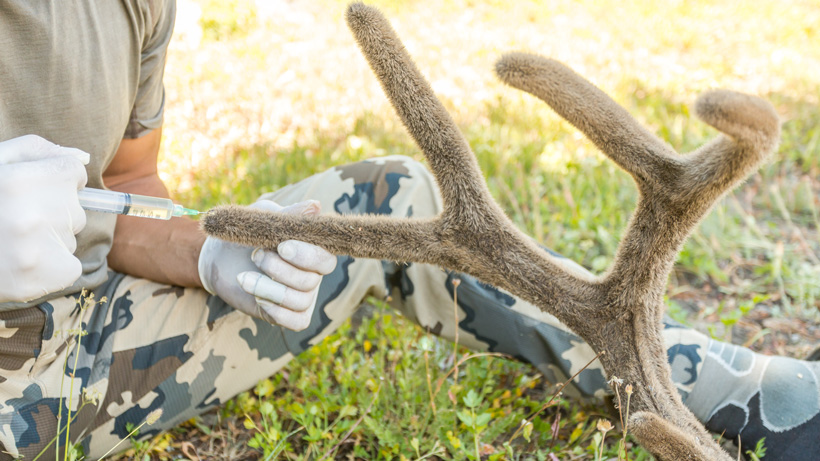 Keep injecting the preserve into all of the veins and even down the antler tips. By this time you should start to see some blood and discolored solution coming out at the tips and bases. I don't feel like you can add too much solution to the antler veins. So I'll go over each antler several times to make sure I got in each vein. 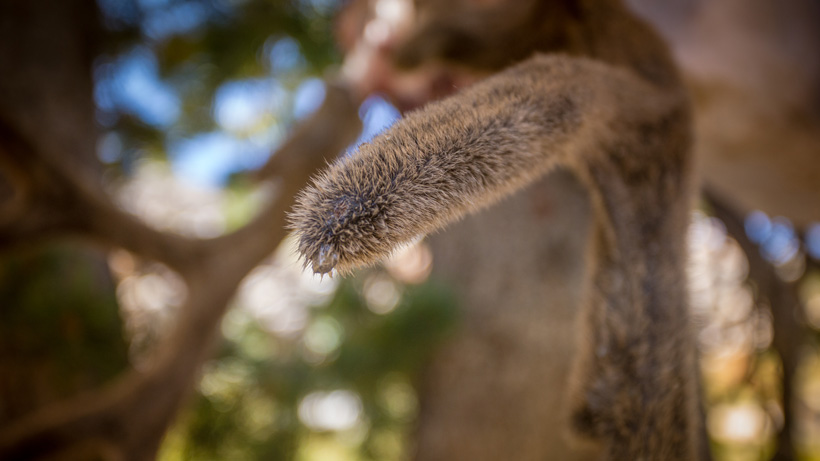 You’ll want to continue to inject the solution down the vein lines until the preserve that's coming out of the tips of the tines is the same as the color as the solution. You may notice some blood at first, but in the end, you should have the clear solution flowing out of the velvet. 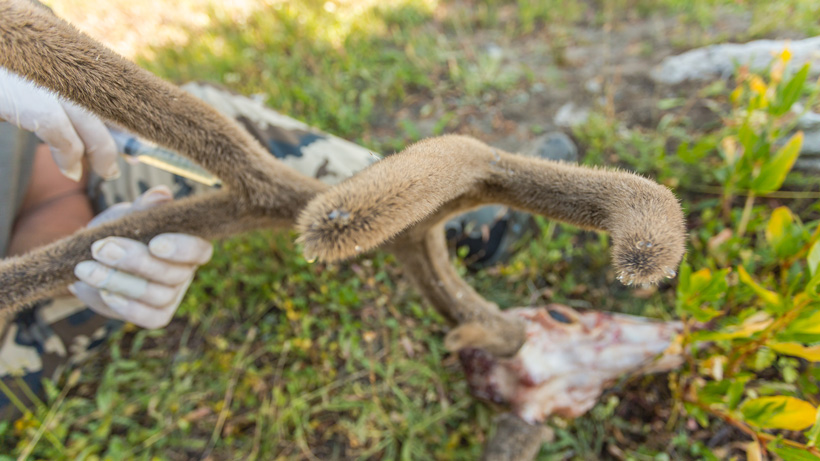 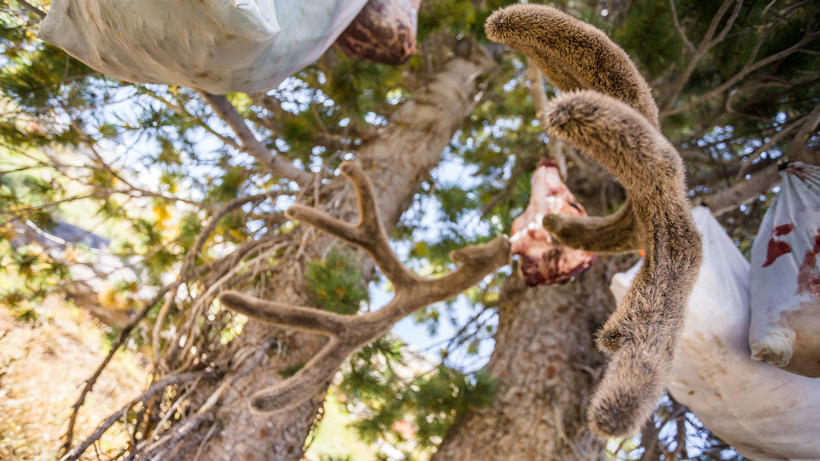 Once you’ve finished working over each antler, you’ll want to find a nice shady area to hang the antlers in a way that animals can't get to it. Note: At this stage, I'll continue to hang my antlers upside down to let the preserve flow out of the velvet. 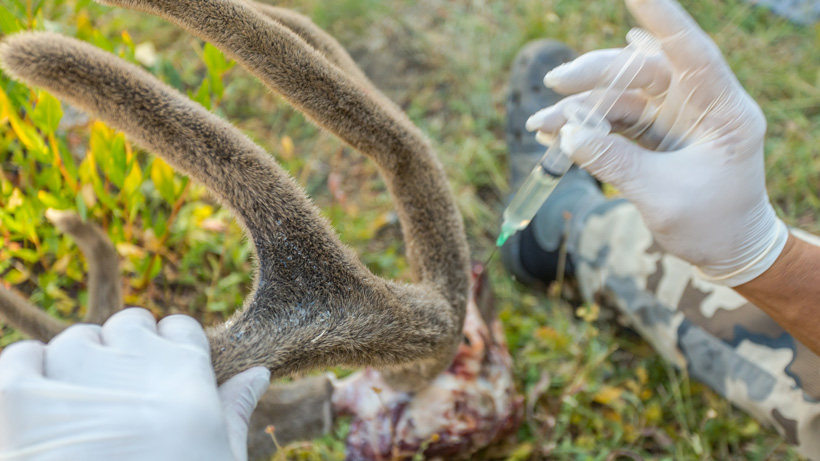 Once the solution has dried and you no longer see anything coming out of the antler tines, you can then apply some of the solution lightly over the velvet. My taxidermist told me about this step and he said this is commonly overlooked, but highly important because this step will prevent small bugs from trying to enter the velvet and get into the areas that have no blood.

After all of these steps, you'll have a nice velvet rack that you can be proud of and your velvet won't rot off. Once you get off the mountain, try to take the rack to a taxidermist right away, or place the entire rack in a freezer until you can get it sent off. We've left a velvet mule deer rack in the freezer for over a year and the velvet was in phenomenal condition before we got the rack to a taxidermist.

No matter what method you go with, this is a very easy process.

Update: This article was originally published in July of 2014.