How to pick apart the Arizona terrain for deer 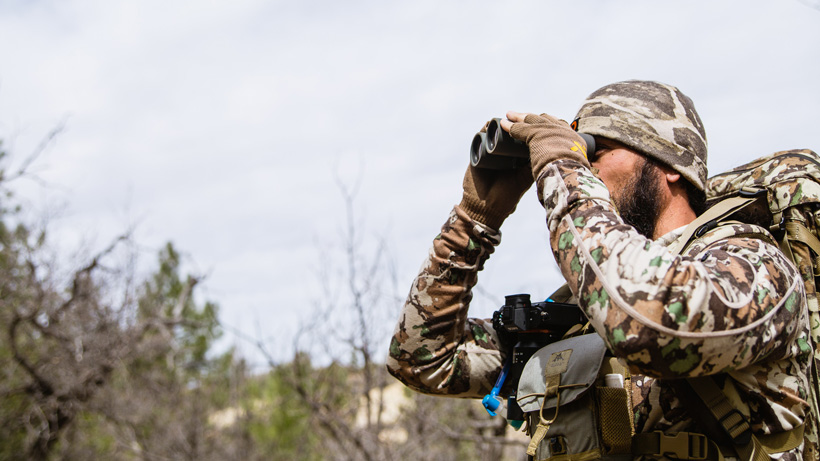 The terrain in Arizona might look a little deceiving... but don't let that deter you from having an amazing hunt! Photo credits: Josh Kirchner

No matter what type of hunt you are getting ready to go on in Arizona, there is much scouting to be done and, with that scouting, is going to come a ton of glassing. Arizona is perfect for the hunter that wants to sit down and kill a great deal of time behind their optics. We have a diverse landscape ranging from the saguaro cactus choked low desert all the way up into the ponderosa pines of northern Arizona; all of it is great deer habitat. How we pick apart that habitat with our optics is going to be a big deciding factor in whether we will fill that tag burning a hole in our pocket or head home and throw it in a bowl for tag soup. 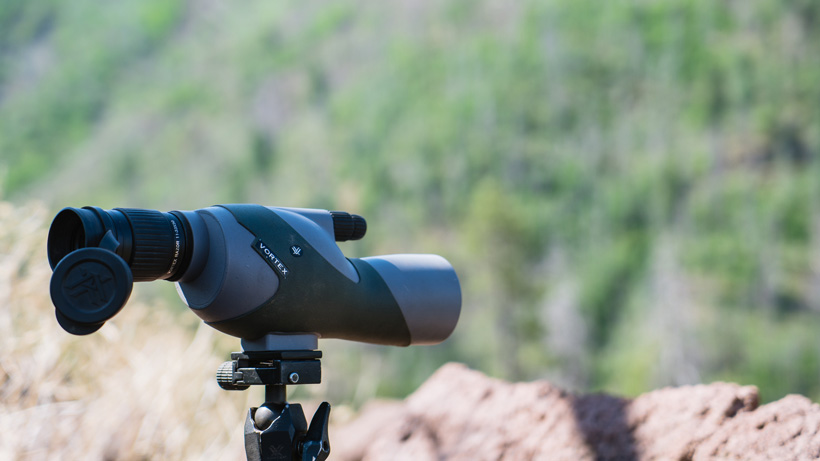 Before we talk about how to pick apart the terrain with our glass, we need to figure out what glass to bring with us. This might vary slightly, or even greatly, between hunters, but, in the end, it's about personal preference and what works the best for you. No matter the magnification though, I would strongly suggest that you mount your optics to a tripod. This is going to give you a huge advantage. The first thing that I think a lot of folks jump to with this topic is magnification. "What magnification should I bring with me on my Coues deer hunt?" If you are at all familiar with hunting Coues deer in Arizona, you probably know that the 15x56 power binocular is king. Many hunters run this bino and only this bino. Others will also bring along a big spotter to enhance those little deer once they do turn them up with their 15s. This is a great system and one that is tried and true. It is not the only one though. 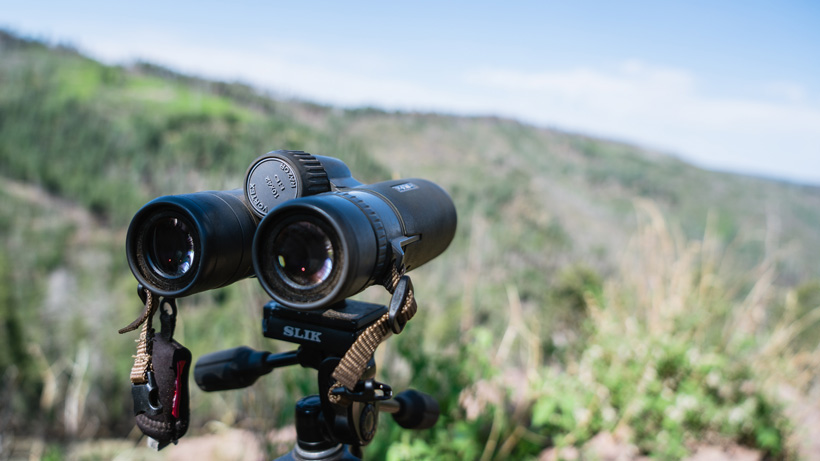 My friends and I seem to do just fine using 10-12x binos for scanning the hills. Once we spot deer, we'll throw on a spotter to get a closer look. The system I run is a 10x binocular on my chest and an 11x33 spotter. With this combination, I can easily tell if a buck is one that I want to pursue. This is where you need to ask yourself a question, though. What are your goals? Are you an inch counter? Are you looking to take a decent buck? Maybe you just want to fill the freezer? These are the questions that will tell you what magnification to bring with you. For the inch counters, you are obviously going to want more power so that you can really get a good look at those antlers. If you are like me and are only looking for a decent buck, the combination above is great. For the freezer fillers, instead of bringing a spotter, I'd look into just toting a 12-15x power bino.

Also, for all your optics or tripod questions, you can always email goHUNT's Optics Manager Cody Nelson at optics@gohunt.com or call him at (702) 847-8747 | Ext. 2. Cody is always happy to help you out in selecting the perfect optic package and is a great resource to take advantage of. 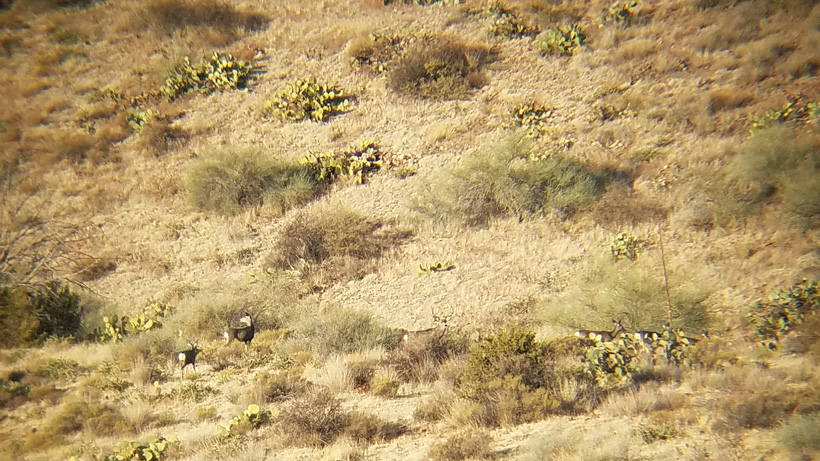 No matter if you have an early tag or a late tag, following the sun first thing in the morning is going to lead you to deer. This is not a carved-in-stone rule and there are certainly exceptions to it; however, it is a rule of thumb. This means looking at southern and eastern faces, which will put the sun at your back. These are the sides of the hill where the sun will hit first in the morning. Their feed just tends to be more prevalent on these faces and they know it. As tradition would have it, deer are going to be feeding first thing in the morning and go to bed after that. You need to be in a position to keep an eye on the breakfast buffet before the sun comes up. An added benefit to this is that the deer really pop in the sun as well. It's as if they glow on the hillside, which makes them easier to see all together. I'll glass these faces until around 8 or 10 in the morning, depending on the time of year. Once it gets too hot, though, they are going to move as should you. 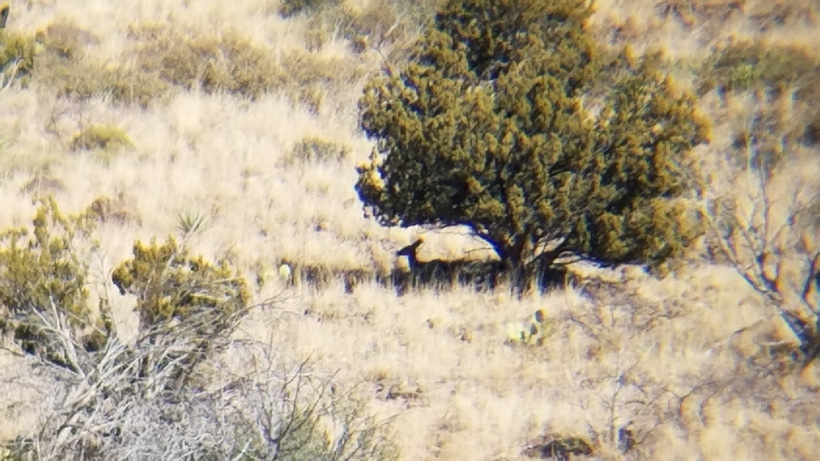 To contrast what we did in the morning, we are going to do the opposite in the afternoon and evening. This means that instead of following the sun, we are going to follow the shade. Northern and western faces are going to be the ticket here. Again, not a carved-in-stone rule, but a rule of thumb. There just tends to be more shade and thicker vegetation on these faces, which is perfect for deer wanting to bed. Wouldn't you want to be in the shade during the heat of the day? Deer are no different. Many hunters head back to camp after the morning hunt, which gives you a few advantages. Number one, it's a lot quieter during midday than the morning. Number two, if you can find a bedded buck, now you know exactly where he is. As long as you don't spook him, that deer is not going far. He might get up to move beds as the sun changes position, but you've got a lock on him now. If you are rifle hunting, you might be able to shoot this buck right in his bed—a relaxed shot that you can even take your time on. For the bowhunter, it's time to make that loop around and close in on the sleeping buck.

When it comes to the evening, deer are going to be making their way from their bedding areas back out to their feeding areas. As the sun goes down, take a gander over at those south and eastern faces again. This can be tricky, especially with the eastern faces because it puts the sun in your face. However, this is actually where the shade will be now and where the food will be. It's dinner time.

Slow and steady wins the race 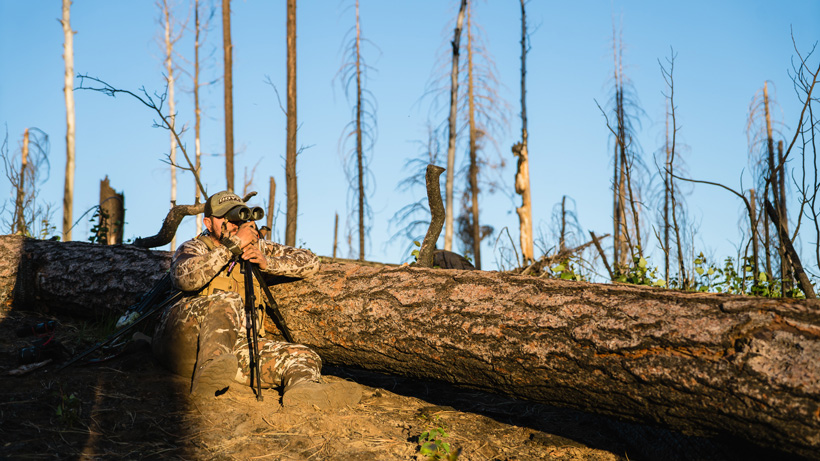 We've discussed where to look. Now, we will discuss how to look. I mentioned earlier that I highly suggest you mount your optics on a tripod. Well, I just said it again in an effort to drill that into your memory bank. By doing this, you are going to be able to not only see movement easier, but you are also going to be able to glass slower. I am of the opinion that most folks glass too fast and I catch myself doing it as well. The urgency of finding deer sometimes takes over and I forget to take a breath and let things unfold before me. This means the opposite of fast. 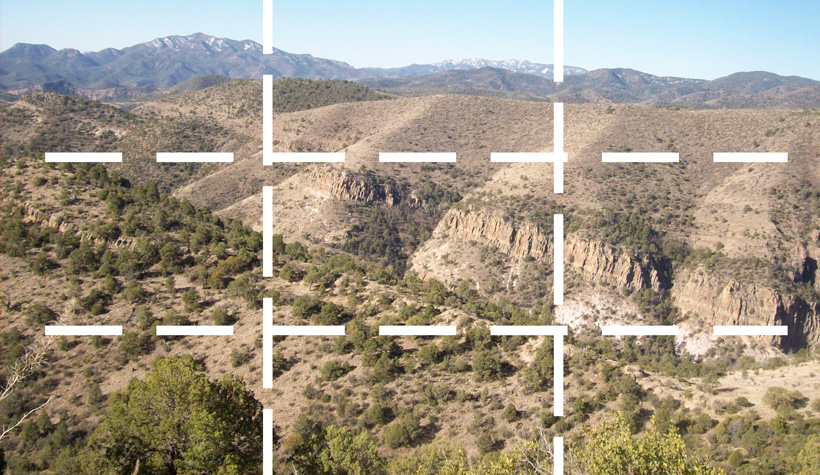 I am sure you have heard people say, "Grid the hillside with your binos." This is a great way to find deer. All you do is scan the hills in a grid pattern looking for "deery" type things. Let's take it even a step farther though and grid within the grid. When I really slow down to glass, I will lock my binos in place and run a grid pattern with my eyes just within the field of view I have at the moment. When I am done, I'll continue the grid pattern with my binos, which will move me to another area on the hill. Then I will repeat. This might sound monotonous, but Rome wasn't built in a day.

One hill at a time 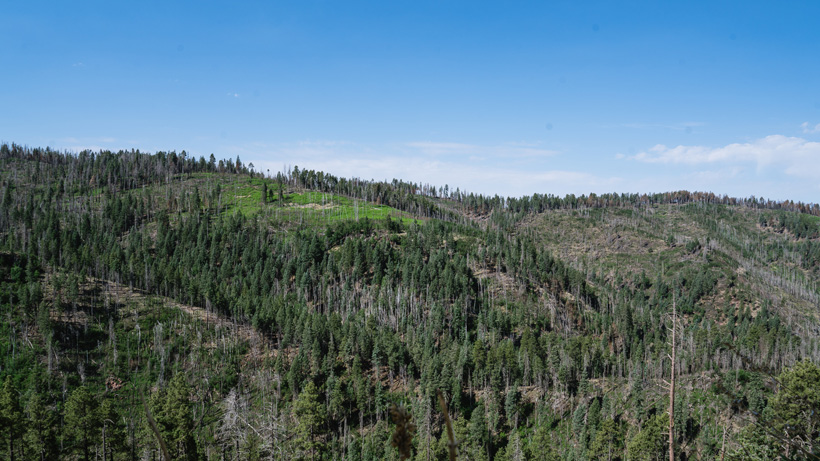 Arizona has some pretty open terrain, which is great for glassing deer, but can also be overwhelming. There is just so much to look at! In my early years, I would literally glass and grid the whole picture in front of me. Nowadays, I've altered my habits a bit. Instead of looking at everything as a whole, I look at it in sections. Say there are four different exposures in front of you. I will grid each one of those exposures one at a time. This gives me the ability to really get a good look at these hills and hone my focus on them. Glassing efficiently and effectively is king here and this plays right into that. Before approaching it like this, I feel as if I was probably overlooking a lot of country, just in order to "glass the whole area." While I did, indeed, glass the whole area, I did not really see the whole area. 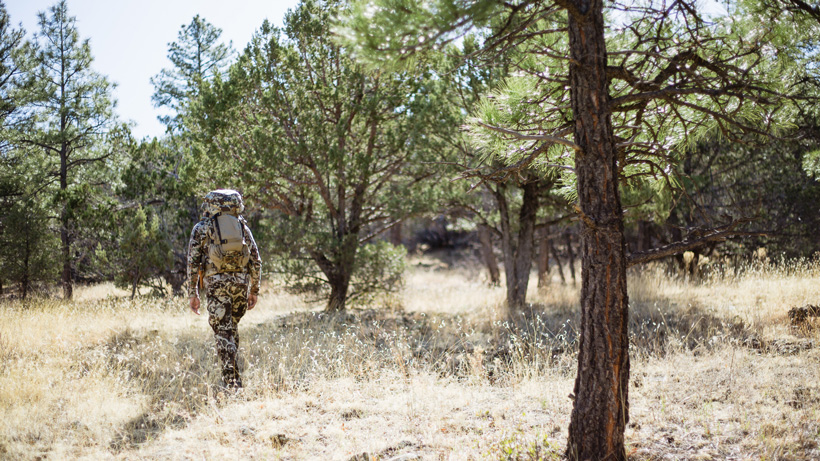 I don't know about you, but after writing all of that, I am itching to get out there and glass up some bucks! The late-season over-the-counter hunts are finally here in Arizona and, hopefully, I've set you on the right path to better your glassing in this great state that I call home. Just like anything, there is more than one way to skin a cat. The things I have listed above are merely the things that have helped and worked for me. I think these suggestions help lay a foundation  in order for you to find your own way of doing things. Maybe you prefer the big magnification over my setup? That is totally fine! What's more important is that you get out there and test out your theories. So, what are ya doin’? Get out there!

I run into the same issues with the 10's and love carrying a small spotter for the reasons you mentioned. Those coues are tough! Good luck!

Thanks Erik! Good luck out there!

I like to carry 10 x 42s around my neck, 15 x 56s & spotter in my pack. When I get to a spot where I want to glass I scan the area with the 10s first than set up the tripod with 15s. I find myself more & more leaving the spotting scope behind due to weight. The 15s usually have enough magnification to see what I want. I do still carry the spotter now & than.
Great article thanks!

A high quality 10x42 steadied on a tripod will do great to see Coues deer under the right circumstances, good light, deer on the move etc. I've done it, but I find more power is usually needed to sort out horns. I've found a good pair of 12x50s and a small spotter, 12-40x60 gold ring in my case, gives me a little more flexibility to find deer bedded in brush or standing still in Ocotillo. Also, if I'm going to a place where I expect to glass farther than 1000 yards I'll usually haul the bigger glass, 15x56s and a 20-60 spotter to allow horn identifying. With my eyes even the 12s run out of gas around 800-1000 yards on identifying horns. But you can get a lot of mileage out of 10s on a tripod, especially early when the deer are moving.