Back to Field Care 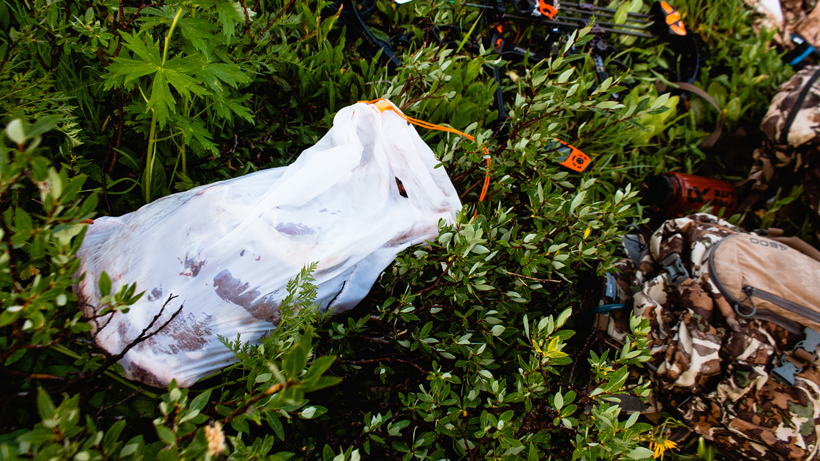 I’ll go out on a limb here and say that most big game hunters are using game bags these days. The benefits of putting the fruits of our labor in them far outweigh the cons by a long shot. And with how far along they’ve come over the years with being reusable, made of ultralight material and packed with functionality, it’s a no brainer to put them to use. On the surface, that use obviously consists of protecting and helping with transport of our wild game meat from the field to the cooler. Under the surface, hauling meat is not the only thing game bags are good for. Multi purpose items on backpack hunts are gold and game bags fall into that category. Here’s a few practical ways past the meat end of things to diversify how you can use game bags on your next backpack hunt.

Quality sleep on a backpack hunt is crucial for mental clarity as well as physical recovery. A good pillow can do wonders on that front. Bringing a pillow along though takes up space and weight, especially if it’s not one of the mega ultralight backpacking options. So, if you’re really looking to shave ounces, consider using a game bag as a pillow. More specifically, I should say using a game bag as a pillow case. You’re bringing game bags along anyways for that buck you’re going to arrow. A puffy jacket stuffed down and cinched up in a game bag can resemble that bigger pillow you sleep on at home. Heck, you could even put the clothes you wore from the day in there as well to help add to the size of said pillow if you choose. Not everyone does well with the ultralight backpacking pillows on the market, so this is definitely something to think about if that sounds like you. And the thought of sleeping on a pillow similar to that of one at home is pretty enticing.

There seems to be a stuff sack for everything these days in a backcountry system and rightfully so. Stuff sacks are great for organization inside of a backpack; however, just like that pillow, they are another thing to bring along. So, instead of carrying around all of those extra stuff sacks, why not turn to your game bags? You’ve got empty game bags at the start of your hunt just laying dormant until further notice. Use your game bags as a stuff sack for the hike in. Most high end game bags nowadays are shaped to fit on the frame of a backpack, which means that they’ll fit great on the inside of a backpack as well. A sleeping bag, sleeping pad and shelter can all fit stuffed down into a game bag. This will also help on the organization front as you’ll know exactly where your sleep system is when arriving at camp. It just adds to the efficiency of the whole system. 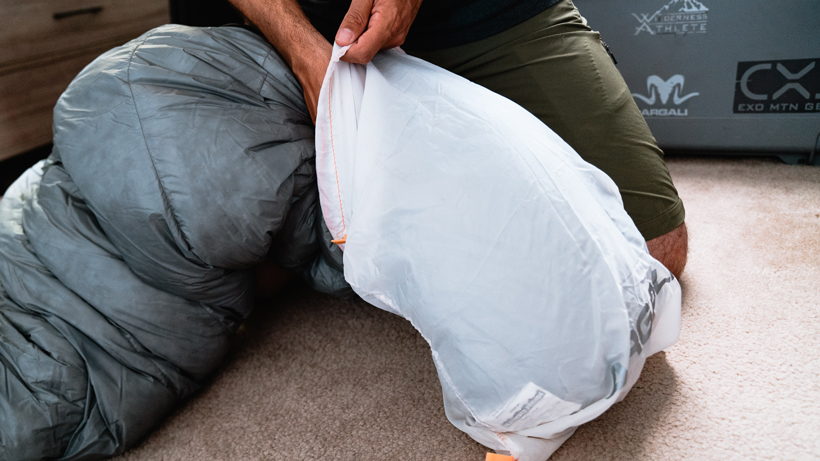 Another thing to mention on the stuff sack front is for food. Food takes up so much space inside of a pack and usually ends up getting shoved anywhere and everywhere. That very food can be stuffed down into a game bag and you could even hang your food in that game bag as well. The game bag is already expected to be hung in a tree. Of course, this isn’t as durable of an option as a dry bag in a tree, but it gets the job done in a pinch. I’ve seen several folks do this with success. Not only is this a great way to save weight on yet another stuff sack, but a game bag is far easier to spot in a tree, especially if they are white as most are.

I can’t think of a reputable high quality game bag that doesn’t have a drawcord on them. These drawcords are there to help cinch a bag shut and keep the flies off of our meat. From there, they can be used to hang said game bag in a tree once it’s loaded down with that elk you just shot. They can also be used for other things though. Some companies even use legit paracord as a drawcord, adding to the durability and functionality of them. One of the first things that comes to mind with those is the ability to repair a limb driven drop away arrow rest. Should the cord on your rest take a nosedive, that drawcord on your game bag can take its place. It might not look pretty, but it’ll get you to the dance. 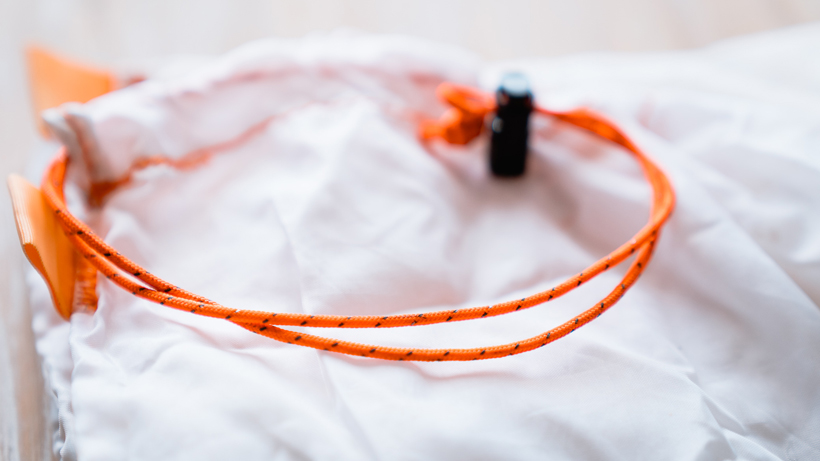 Ever break a boot lace in the field? I sure have and wish I had one of these newer game bags at the time to remedy the issue. The drawcord on a game bag can be cut out and used as a replacement bootlace. A few friends of mine did just that years back and it worked like a charm. Again, not pretty, but it kept them in the field hunting. If it comes down to hunting or not hunting, the drawcord is coming out of the game bag and jumping onto my boot. After all, this isn’t a fashion show.

Yes, you indeed read that subtitle correctly. Communication is another way that we can utilize game bags. Let me elaborate. For spot and stalk hunting, it pays to have a spotter watching the game you seek while you close the distance. Now, communication between the hunter and spotter is usually done by way of hand signals or even radios. That is another article entirely, but the fact remains. The issue — particularly with radios on backpack hunts — is they are yet another thing to bring along. They are heavy and not made for the ultralight minded. Hand signals are great, but it can be difficult to see the spotter from time to time at a distance. This is where game bags come in. 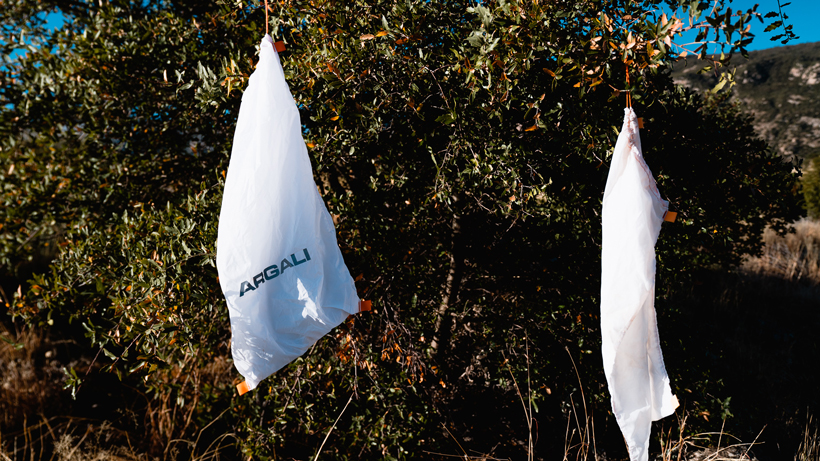 Because most game bags are bright white, they are much easier to spot from a distance. On multiple occasions, we’ve used game bags paired with hand signals to direct bowhunters into game. By holding the bright game bags in your hands while giving the signals, it is much easier for the hunter to see. Along with that, game bags can also be used to communicate if the animal spooked or if we, the spotter, have lost sight of the animal. For instance, we’ll hang one game bag in a tree to let the hunter know the animal has spooked. Two game bags in the tree will let them know we have lost sight of the animal, but they have not spooked. Both are valuable pieces of intel for the hunter. 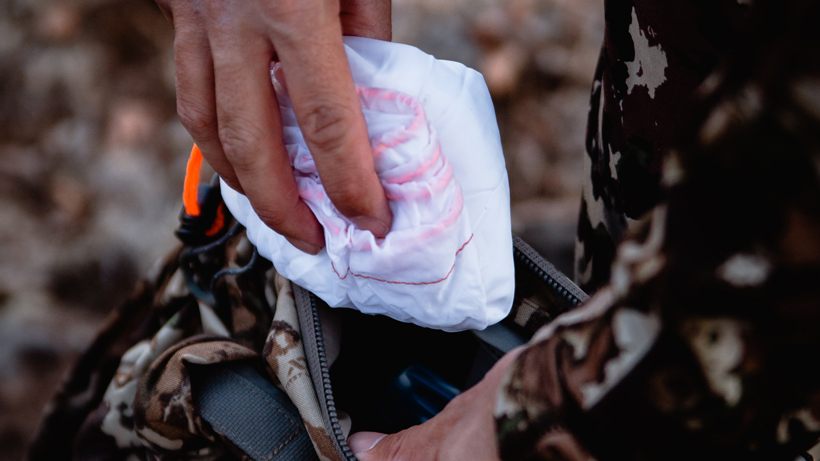 When the sun sets, this is really all about saving weight. That is something always on the mind of backpack hunters. Go in as light as possible with plans of coming out heavy! Multi-purpose items like game bags help achieve that and they do it in an extremely lightweight package. One that, might I add, literally just sits there most of the time. Game bags traditionally aren’t even thought of until an animal is down. What I’ve laid out above offers a few opportunities to put them to use beyond what they were made for. They help with heavy loads, yes, but they also help lighten them. Sometimes thinking outside of the box is inevitably what will make that box weigh even less.