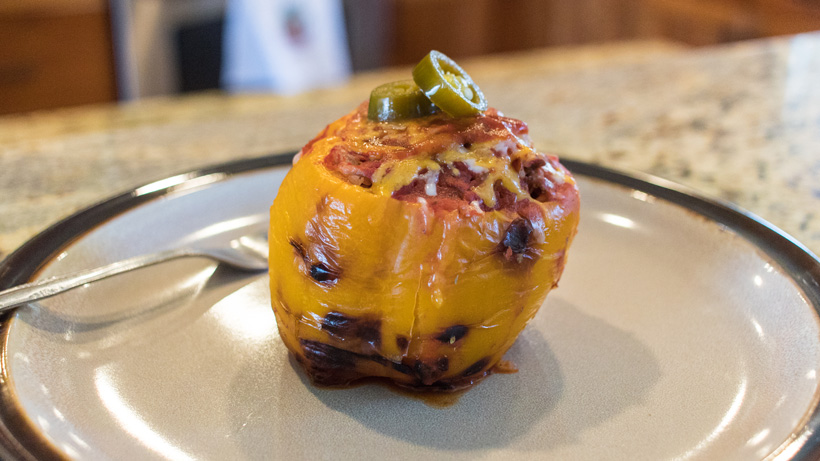 2020 has been an eventful year to say the least. My wife and I welcomed our second child, got to spend a lot of time with family and, of course, the quarantine. Speaking of the quarantine, we are getting to the point where our old standby dinner recipes are getting boring and losing their excitement value. With the weather starting to pick up I’ve been dying for some fun recipes rich in the flavor and color categories — not to mention: my freezer is now totally devoid of any remaining fun game cuts such as roasts, steaks or stew meats.

With a renewed sense of hope and a desire for new flavor I stared at the only form of meat left in the deep freeze: burger. After running through the approximate 6.3 million recipes involving burger, I landed on one of my all time favorites: stuffed peppers! Stuffed peppers have been around in one form or another for ages and this easy-to-make dish is sure to be a hit for everyone. Bonus points: this is a great recipe to do with the family! I went with a fairly standard preparation of this dish, but this dish can really be tailored to any liking.

Before getting to the recipe, I wanted to first address my complicated method of cooking. I can’t follow recipes so much so that if I measure out the required water for my kid’s macaroni and cheese it will end up as one of two things: a solid and mostly inedible brick of noodles or a form of mac n’ cheese soup. On a molecular level, no two things I’ve ever cooked have been the same. While preparing for this article I really tried to be as descriptive as possible, but it really just took the fun out of it! Trust your gut when cooking wild game; everybody's taste preferences are different and experimentation has led me to some of my best dishes 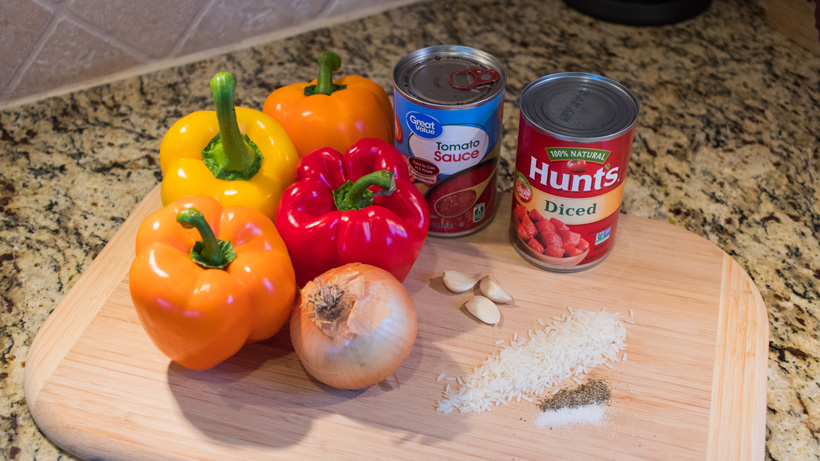 This is an incredibly easy recipe and, more than likely, you can find a large chunk of the necessary ingredients in your pantry. 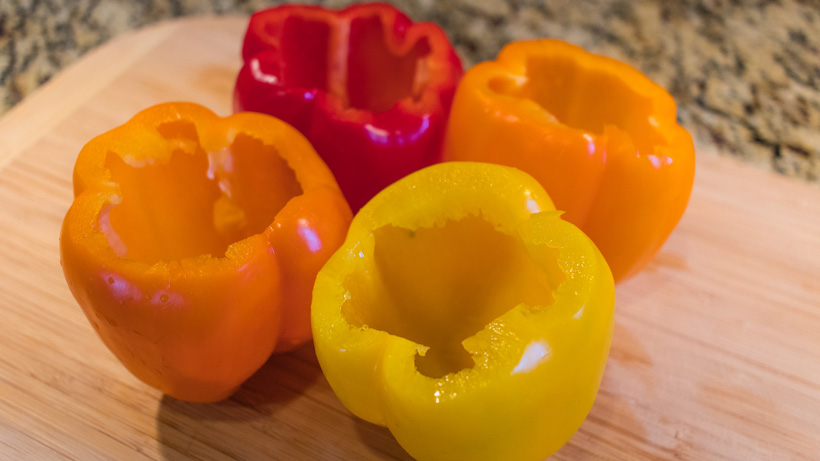 To begin with, cut the tops off of the peppers. Clean out the seeds and any membranes. It may be necessary to slice a thin layer off the bottom of a pepper to get it to stand properly in your dish.

Because the quarantine life has been a boring one, I decided to add some level of excitement to this dish and opted to first char the peppers on a super hot grill. I did this for a few minutes per side or until the skin began to blister. Side note: you will notice a buildup of moisture inside the pepper after this step so make sure to drain any excess off before continuing.

Once the peppers are prepped you can move them to your baking dish. 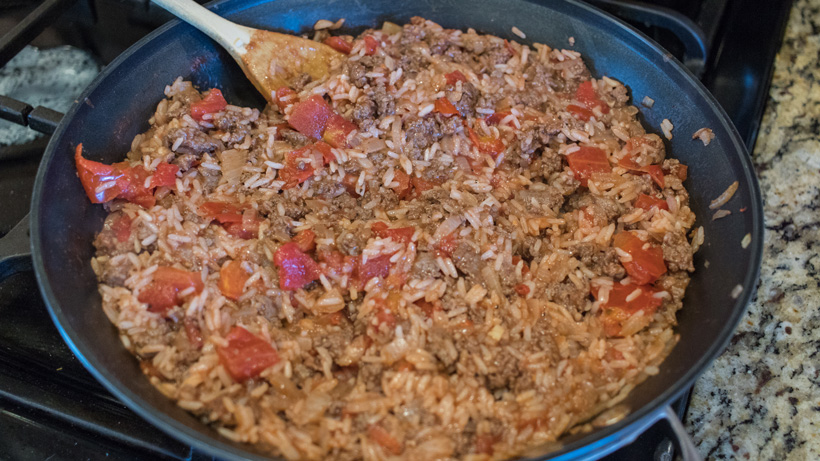 Preheat the oven to 350 degrees. In a large saucepan, heat a splash of oil until shimmering over medium-high heat. Once heated, add in the onions and sauté until transparent for about eight to 10 minutes. Next, add in the minced garlic and cook until fragrant for about two minutes. Finally, add the burger and cook until well browned.

While the burger is browning, drain off the diced tomatoes and reserve the liquid in a small bowl. Once the burger is done stir in the tomatoes, cooked rice and about a third of the tomato sauce. Stir the filling together and season with salt and pepper to taste. 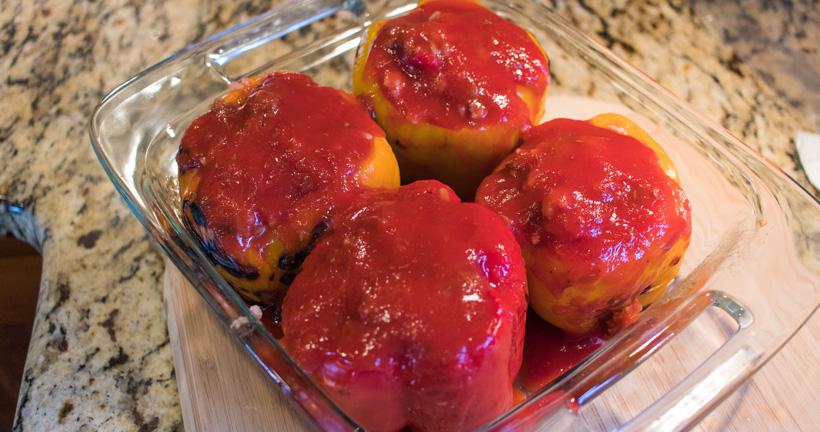 Now, add the filling to each of your peppers. I like to make sure the mixture is stuffed evenly into the peppers without any air pockets. Fill the peppers until the meat mixture is just crowning out of the top.

Next, combine the remaining tomato sauce with the juices reserved from the diced tomatoes and season with salt and pepper. Spoon the sauce generously over the peppers and prepare them for the oven. 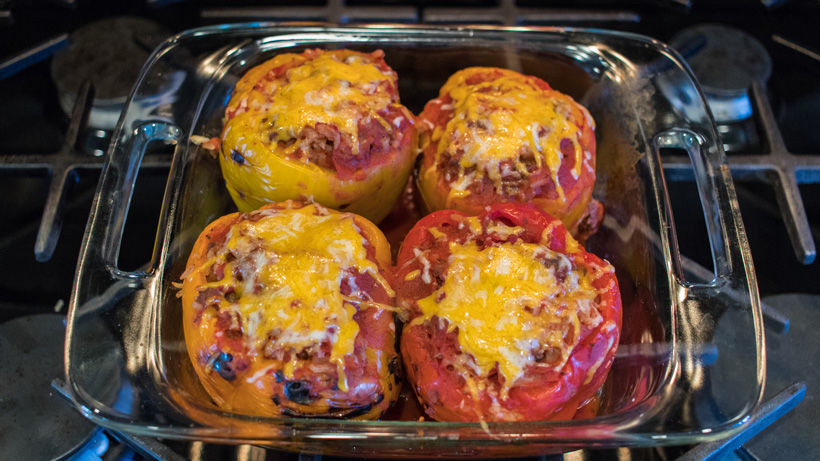 Once the cheese is melted, remove the peppers and let stand for a few minutes before serving.

ADD YOUR OWN FLAIR

As I mentioned above, stuffed peppers really are a blank canvas for flavor profiles. If you're into Mexican food consider adding taco seasoning and chopped jalapeños to the meat mixture and topping the finished product with sour cream and salsa. Or for more of a traditional Italian version, substitute the burger with sausage and top with mozzarella and fresh chopped basil. This can be a fun one to experiment with!