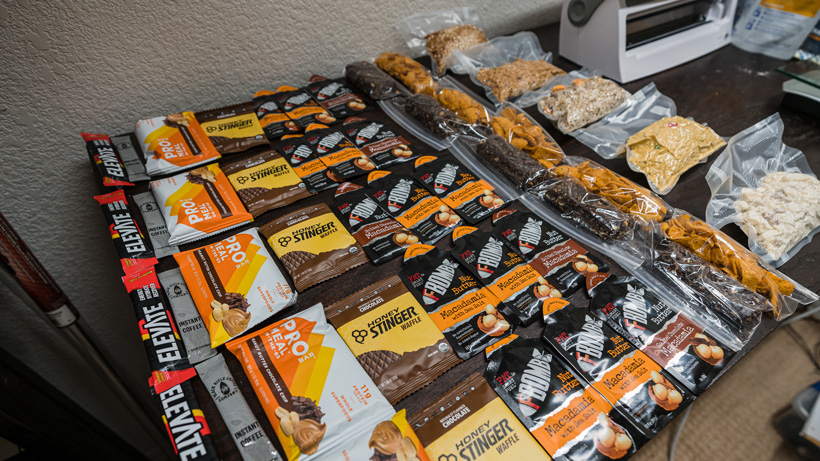 Reducing bulk, saving weight and keeping calories at a decent level on a backcountry hunt. All photo credits: Brady Miller

Food… one of those things that fills up your backpack quickly, but is essential to hunting hard each and every day in the mountains. Putting together your “food list” is just as important as a gear list.

Each year I look at my food list for a backcountry hunt and wonder if there’s anything I can do to improve it. And by improving it I mostly mean that in terms of calories, track my fats, carbs, proteins, etc. Also, it's just as important to analyze your food list after a hunt to see what items you didn’t eat so you can modify your list for the next backcountry hunt you go on.

And if you remember, the saying I like to use all the time is “food is fuel, not fun.” So my food list isn’t fancy by any means. It just gives me what my body needs and that’s it. At the end of the day, use what your body tells you that you need. 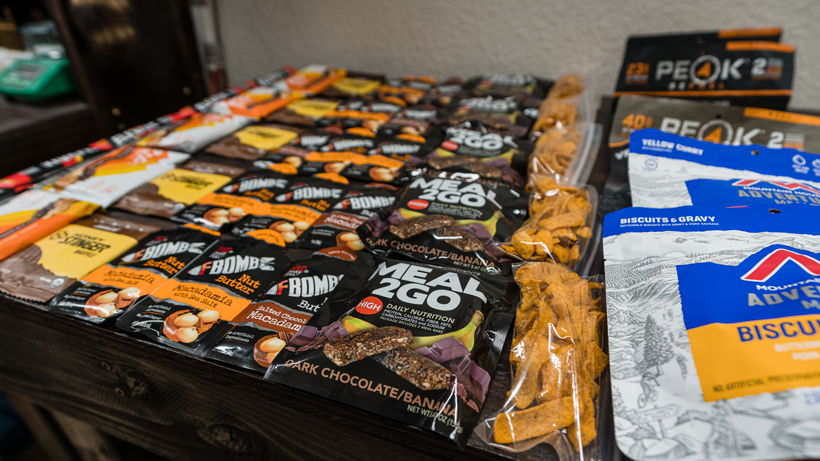 This year, I took another look at my food list and decided to modify it slightly. Now I feel like my food list is pretty dialed for 2021, especially when I look at the 153.97 calories per ounce average.

If you remember, in years past I’ve published several different versions of my food lists. A few very popular ones were: The Stoveless Backcountry Food List Version 1 and The Stoveless Backcountry Food List Version 2. Along the same lines, back in 2014 I covered my food list in a big gear list article and discussed how I create custom freeze-dried meal portions and cut my own custom vacuum sealed bags to reduce bulk.

This year I decided to switch things up from my normal food list for several backpack trips I have coming up. I reduced the number of calories I’m currently consuming mainly because I have a hard time eating a ton of food on hunts. On some previous backpack hunts, I was at 3,307 calories per day at 160.22 calories per ounce of food with a total of 1.46 pounds of food per day. Also, I am going to be taking a stove, but I took some of those previous stoveless methods and sort of modified my approach.

Below is the exact breakdown of my food.

For these upcoming hunts, I've prepared nine total days of food, and I'm hoping to go in and hunt for five days, then if needed I'll head out and grab more food. I’m going to take my highest calorie freeze-dried meals at the beginning of the hunt (my mind I want to avoid getting drained early on, so I can hunt hard at the tail end of the hunt). But again, as I say this... I'm thinking about switching it up and carrying in seven days worth of food. That way it's a lot easier to ration food if I need to stay up there and I'm on a giant buck.

So if you add those hydration related items:

If you remember my 2014 gear list article, I've been vacuum-sealing my freeze-dried meals off and on since that year. I mainly do this to reduce bulk in my backpack and it saves a very small amount of weight. And yes, adding boiled water to a vacuum sealed bag is just as easy and safe as the original packing. The only difficult part is you need to fold the top over while you wait for the meal to re-hydrate. 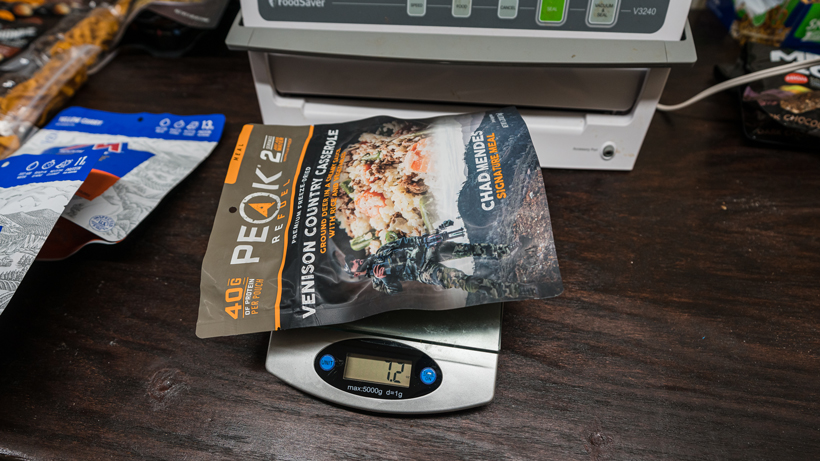 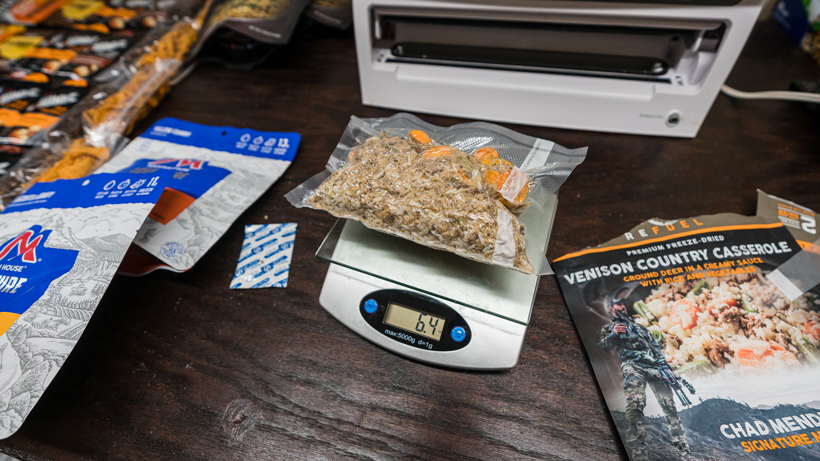 After I removed the meal from the original package and placed it in my custom vacuum sealed bag, it now weighed 6.4 ounces. Plus doing so reduced bulk. 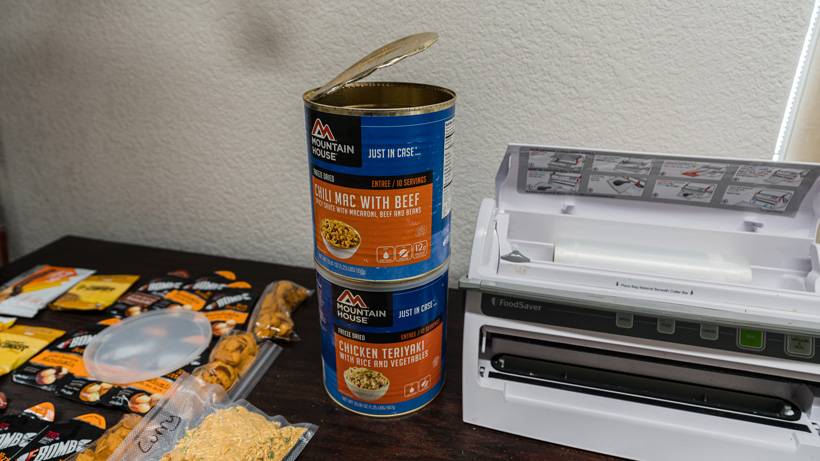 Also, back in the day when I first started to vacuum seal my freeze dried meals, I simplified things by purchasing Mountain House in bulk cans. This allowed me to customize the portions and was a lot easier than buying meals and dumping them into my vacuum sealed bags. For these upcoming hunts, some of my extra dinners still come from these bulk cans. 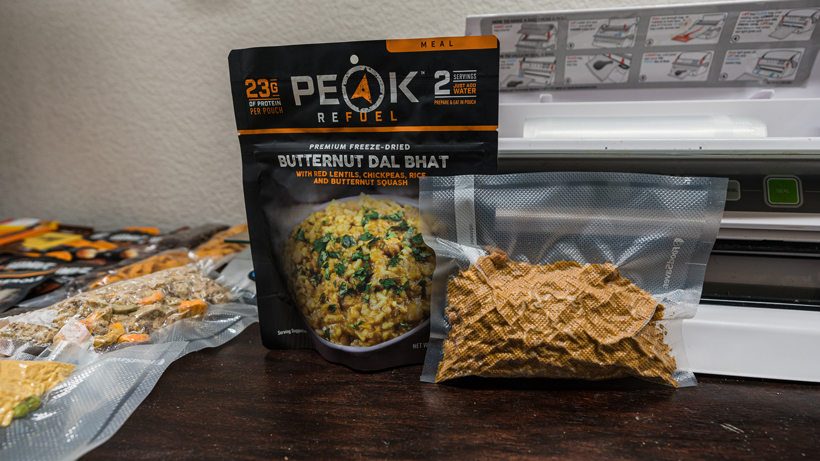 Side by side comparison of the original packaging and then that same meal in a vacuum sealed bag.

Below is a table of the original package weight of several freeze dried meals and the weight savings by moving to a vacuum sealed bag. I grabbed several different meals for this test and the Butternut Dal Bhat is listed twice because I am actually taking two of those. So this was a rough example of what it would look like if I packed these five dinners on a hunt.

If I were to use those five dinners, I’m saving 3.3 ounces by moving to my custom vacuum sealed bags. 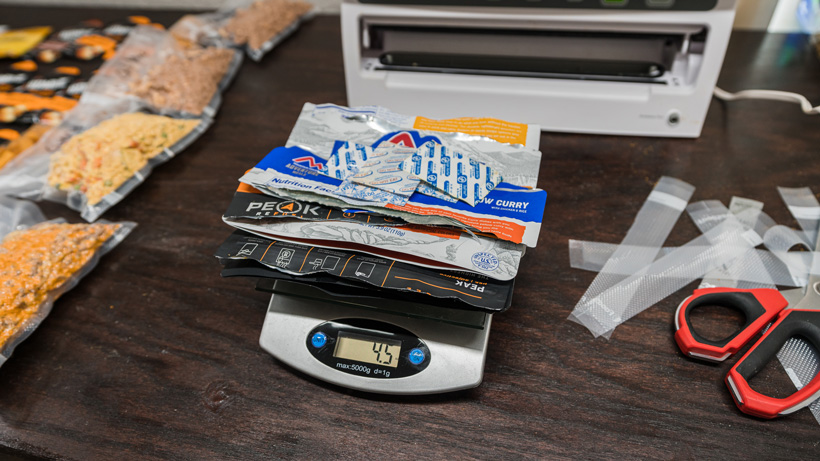 The above photo shows all the original packaging and oxygen absorber packets for the five freeze dried meals from the table above. You'll notice all the wrapper weight equals 4.5 ounces. That equates to 4.5 ounces of trash you have to pack around on your mountain hunt each day. And remember, by removing that and substituting vacuumer sealer bags, I saved 3.3 total ounces. So that means the five vacuum seal bags weigh a total of 1.2 ounces!

The one thing to consider, if you vacuum seal your freeze dried meals, you have to remember to grab your knife out of your kill kit at night as you no longer have the easy to open tab that comes standard on the bags. 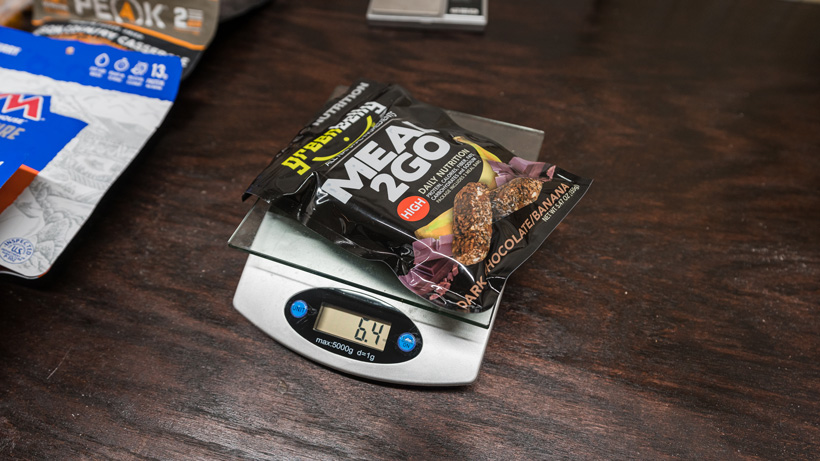 One other area I reduced bulk was on the Greenbelly meals. They typically average out to 6.2 ounces in their original packaging, the heaviest one I had weighed 6.4. So... I wanted to see how much bulk I could reduce and if I could get any weight savings from removing the original packaging. 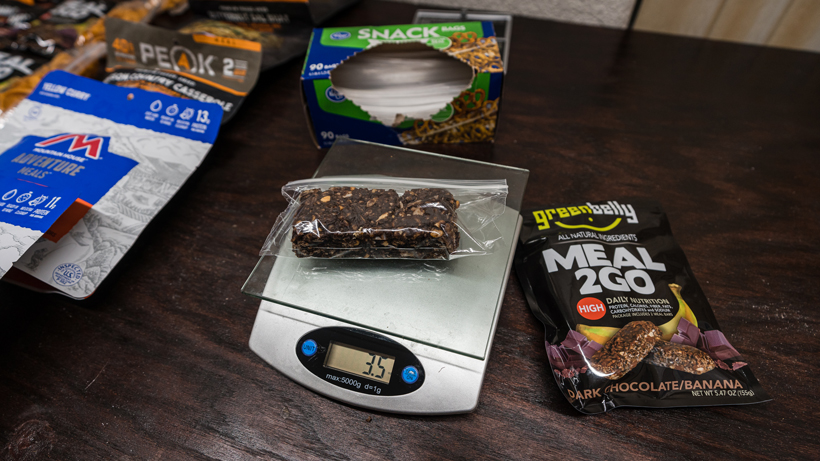 I removed the bars (comes with two bars) from the packaging and one bar weighed 3.5 ounces and the other weighed 2.8. I then put them both in small snack sized ziplock bags and the total weight was 6.3 ounces. 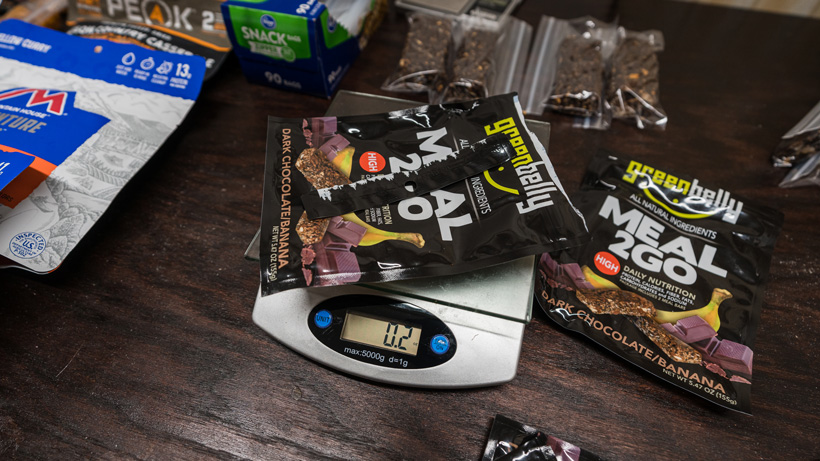 Now… yes that is only a weight savings of 0.2 ounces from the original packaging, but also keep in mind that I’m only packing one bar per day. So really this was a larger weight savings. I used to consume two bars a day, but there were lots of days I had a bar leftover after a day of backcountry hunting, so this goes back to what I touched on earlier about trying to modify my food list based on what I consumed on previous hunts.

Again, what I also saved was a little bulk by removing the original packaging.

Total bulk savings in my backpack 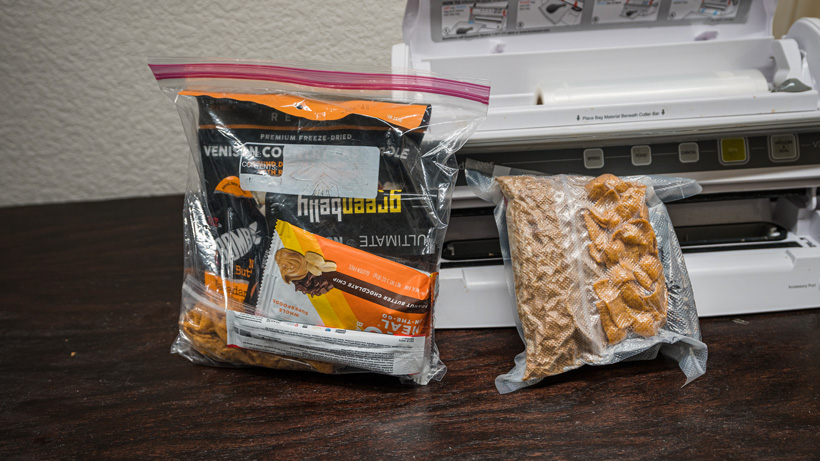 The above photo is a comparison of what one day's worth of food looks like. The bag on the left is without doing what I can to reduce bulk (original packaging and everything placed in a gallon ziplock bag) and then the same exact food is vacuum sealed on the right. Saving bulk could mean you could get by with a smaller backpack, or not having to stress about how you're going to get everything in your bag.

What have I already learned...

I’ve used Greenbelly meals off and on over the years. And comparing them side by side with some other options, I've learned that while they are very dense and full of great ingredients, from a strict calories per ounce perspective, the Probar Meal bar beats them (very slightly). One Greenbelly bar roughly equals 110.00 calories per ounce, and the Probar Meal is at 128.91 calories per ounce. That's only 18 calories so it's not much... probably so minimal that it's not even worth mentioning. But I only bring this up as a way for you to check out this information on your own backcountry food list. 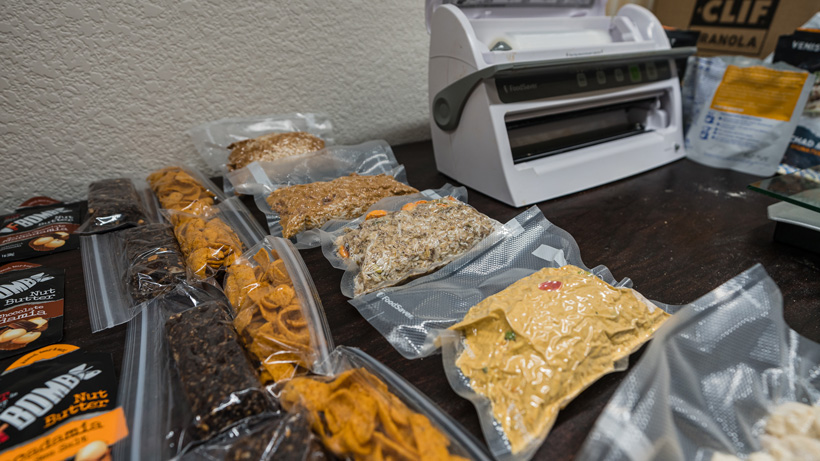 While this might seem a little excessive, it’s just like every other part of hunting… FUN! As you know, I like to tinker with things. My goal with these types of articles is to open a discussion on what works for some people and what doesn't work. As well as trying to find ways that we could do better in our food lists. I'd love to hear what people are currently taking and if there's anything new you've found that could solve some of the problems of trying to take food and more importantly quality food into the mountains so we can hunt as hard on day one as the last day of the hunt.

I've already used this food setup on some summer scouting trips, and I can't wait to get out on some hunts!