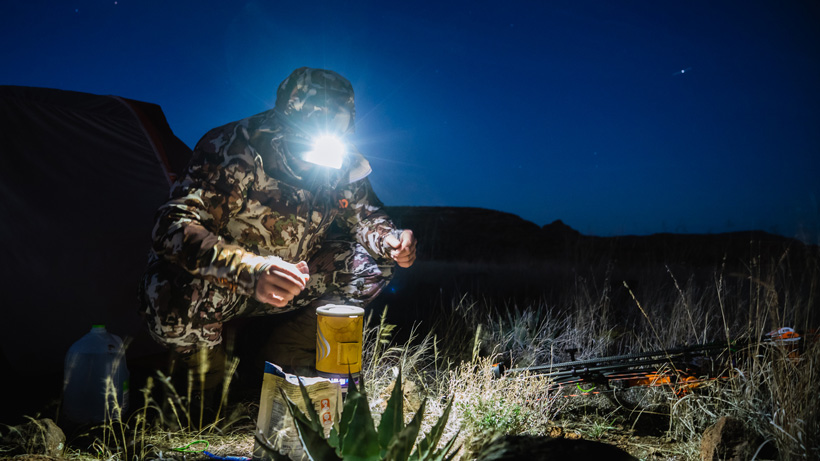 Peanut butter and jelly sandwiches, potato chips and canned beef stew are just some of the delicacies that I grew up eating out in the field. It was a simpler time before all of the luxury we’ve come to know today with gear and weaponry. A time where nothing was done “for the gram,” but solely for the fun, which is how things should be in my opinion. Another luxury that we have today that wasn’t as readily available back when playing in the dirt was a daily occurrence is the access to a now pretty good array of dehydrated/freeze-dried meals. These are meals that for reasons already stated I didn’t really mess around with as a youngster. However, when backpack hunting became something of interest to me, the appealing lightweight nature and ease of use led me straight to them. As do most backcountry enthusiasts. Food is just plain heavy and the canned beef stew of my childhood wasn’t going to cut the mustard. The most common choice out there on the market is Mountain House. All of us have probably used it, but, for many, it just doesn’t sit well in the tummy. Over the years, I’ve found a few different alternatives to Mountain House, so that is what we will discuss today! 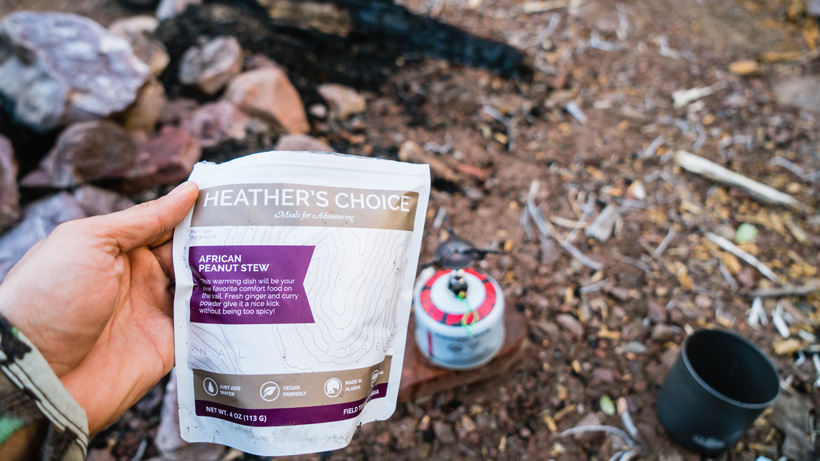 The first company that comes to mind when looking for other dehydrated/freeze-dried meals is Heather’s Choice. I first heard about Heather Kelly (owner) on a podcast years ago before she even had labeling for her meals. If I recall, they were running a GoFundMe page to raise money for that very thing. Since then, things have changed a lot at Heather’s Choice in Anchorage, Alaska and for the better. Kelly focuses on making quality meals from quality sources with quality ingredients. In a day and age where more and more people are concerned about the foods that they are putting in their bodies, Heather’s Choice has your back. They offer breakfasts (buckwheat), snacks (packaroons) and entrees. Some of my favorites are the Strawberry Vanilla breakfast, Orange Vanilla Packaroons and the famed Dark Chocolate Chili as well as the African Peanut Stew. These meals are dehydrated and actually use less water than most meals out there. After adding only around 8 to10 oz of boiling water you’ll be eating. They do take a bit longer to rehydrate (around 20 minutes), but I think that is a very fair trade for the quality of food you are getting out in the backcountry. 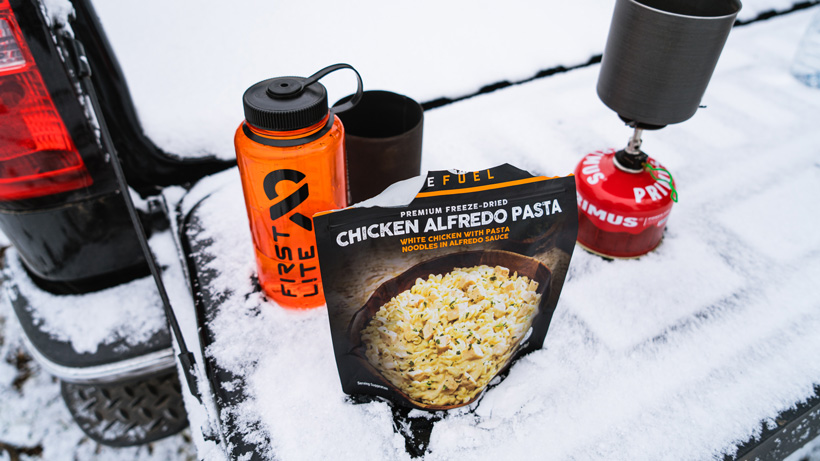 Peak Refuel is a company that peaked my interest a few years ago. I got to try them out on a late archery elk hunt here in Arizona and I’ve got to say that I was impressed. On that trip, in particular, I tried out their Breakfast Skillet. The amount of food in the bag was impressive as was how dense and filling the meals were. You actually have to chew this stuff. Peak Refuel uses 100% real meat in their meals and offers double the protein than most other food bags will give you. That is important in the backcountry where recovery is of the utmost importance after a long day of hunting. On top of that, this stuff truly tastes great. Founder Seth Adams saw a need to smash mediocrity within the freeze-dried food market and he did just that with Peak Refuel. They offer breakfast options as well as entrees. A few of my favorites are the Strawberry Granola, Breakfast Skillet and the Chicken Alfredo Pasta. There are loads of other options, though, on the entree front. One of the great things about Peak Refuel is that goHUNT carries them in their Gear Shop. 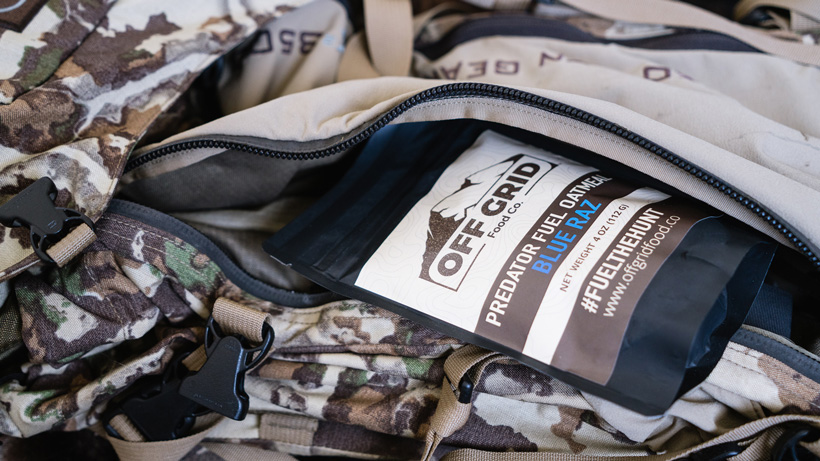 Off Grid Food Co. is fairly new to the market (2017), but that doesn’t mean that they don’t hold their own. In fact, it is just the opposite. I am seeing more and more backcountry hunters toting around Off Grid Food Co. in their packs and it isn’t by accident. Good tasting food is a huge mood lifter out on tough hunts and Off Grid knows that. These are backcountry meals made by backcountry hunters. All of their ingredients are of the highest quality and prepared at the highest level. From breakfasts to snacks to entrees—they’ve got you covered for your next adventure. A few of my personal favorites are the Off Grid Jerky and the Blue Raz Predator Fuel Oatmeal. The Blue Raz tastes exactly like something I would make at home, which is refreshing. One of the only downsides to Off Grid is their food availability. They make their meals by the week as I understand it and sell out very fast. So, if you have your eye on a particular meal, keep your eyes open and jump on them when available. The fact that they sell out so quickly should be a testament to how the food tastes. I’m excited to see where this company goes in the future as I think the only direction for them is up! 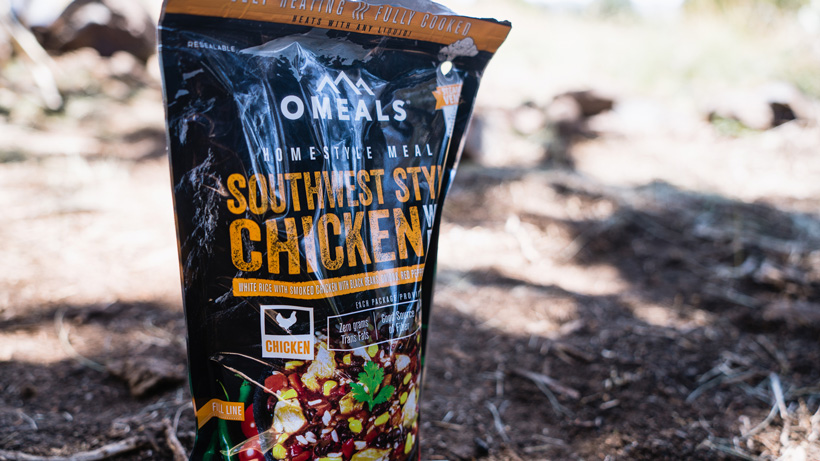 A few seasons ago, I was heading into the backcountry with a few friends on a spring bear hunt. After arriving at camp, we decided it was time to throw some dinner together and get a good night’s rest. Usually, I offer up my stove to anyone that needs to boil water for this glorious occasion. However, when I did so, one of my buddies replied, “No, I’m good.” He then explained to me how the meal he brought for the night was a self-heated meal and all that he needed was a few ounces of water. This is where I first heard of OMEALS. This company focuses on quality, taste and convenience on-the-go. No stove is needed to prepare an OMEAL, so if you’re looking to save weight in your pack, this might be a great option for you. It also uses way less water than any other meal out there. Like 2 to 3 oz. All you do is pour that liquid into the bag, close the lid and in a few minutes, you will see steam shooting out the top vent of the package. There is a heating pad in the bag completely separate from the meal itself. After the allotted time listed on the bag, you have a hot great tasting meal at your fingertips with little to no effort. A few of my favorites are the Hashbrown Potatoes and the Southwest Style Chicken with Rice. This is a fine contender in the world of backcountry food options. OMEALS. Check them out. 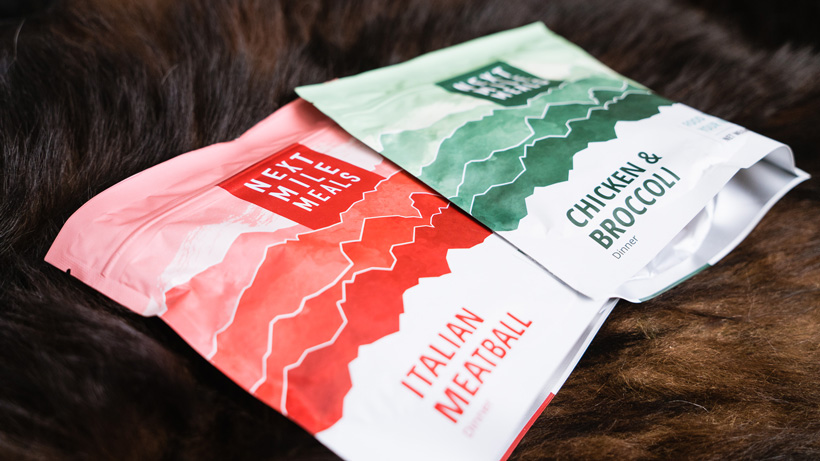 The ketogenic diet has blown up over the past few years. It’s on talk shows, websites and the topic of discussion on a plethora of podcast episodes out there. I think one of the number one questions hunters have, though, when jumping into this diet is “How do I eat keto in the backcountry?” Eating keto can be hard enough on its own, but on a backpack hunt? That’s a different level. This is where Next Mile Meals comes into play. When their founder Jessie faced the task of hiking the PCT (pacific crest trail) she was also faced with another task. The task of eating keto on her journey. From this need, Next Mile Meals was born and, today, they offer a variety of different freeze-dried keto-friendly options, including two of my favorites: Italian Meatball and Chicken and Broccoli. Next Mile uses quality ingredients for quality results. They also offer breakfast items, such as Sausage Scramble and Denver Omelette. So, if you are someone that eats up the keto life and are looking for new options on your hunts, check out Next Mile Meals. 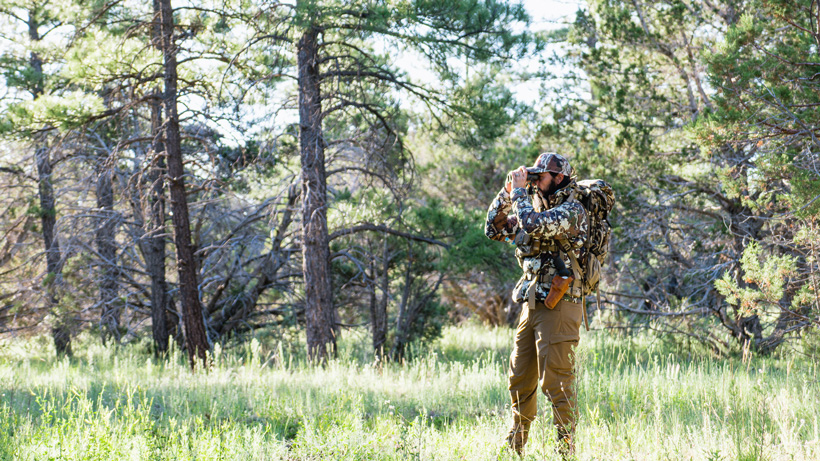 Something that I want to point out before closing this out is that in no way is this a bash towards Mountain House. I am one of the fortunate who have never had an issue with eating their stuff and actually really enjoy some of their meals. My brother, though, like many others can’t. That is a different story and an unfortunate one. So, if that is you, I hope this article points you in the right direction and gives you some new insight into the world of dehydrated/freeze-dried meals. There are way easier ways of doing things than backpack hunting. That is all the more reason to have good quality food with you out there. Food that tastes good just brightens the mood if you ask me. With options like the ones I’ve gone through above, no more are the days of dreading eating. A hot satisfying meal at the end of a long day of hunting is just the right ticket to cap off the evening. The only thing better to add would be your tag wrapped around whatever you’ve been chasing relentlessly. Eat well and hunt hard.