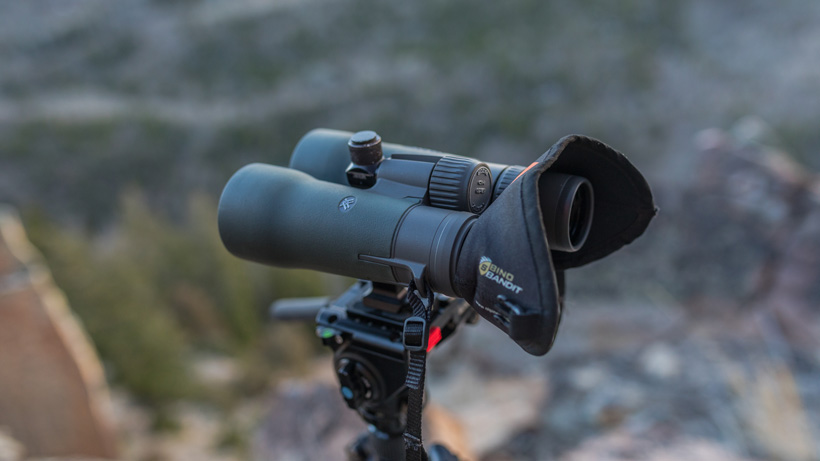 Last year, I outlined why carrying multiple optics are essential for locating more mule deer. In that article, I outlined the pros and cons of certain optic setups while, at the same time, staying consistent with the importance of carrying at least two or, even, three pairs of optics. If you need a refresher, you can check out that article here.

A few things have changed in my glassing setup since that article. Those optic systems worked great for me—phenomenal actually—and I’m sure you know by now that I’m a gear junkie through and through. But, at the same time, I’m always looking to gain an edge on a hunt. Prior to 2017, I had become accustomed to carrying everything and the kitchen sink when it came to optics (after all, I was cutting severe ounces in other areas to accommodate my optics).

Fast forward to 2018, after a full season of experimenting. I was hesitant on this new setup at first because, in the past, the more optics seemed better for the type of hunts I was doing. After more than one season of testing, I truly believe that I have finally found the system that minimizes weight, yet doesn’t sacrifice on power and clarity.

After more than a full season behind this new setup, I feel like 12 power binoculars are the way to go for any backcountry type hunt. By backcountry, I’m referring to any hunt where you are looking to save weight. This could be a grueling weekend hunt where you’re planning on leaving work at 5 p.m. on a Friday, driving through the night and then hiking at 2 a.m. to beat the morning sunrise, to a hunt that encompasses seven to nine days in the mountains of Colorado.

Then at the same time, I feel like these are a huge advantage on more relaxing hunts like day trips from a hotel.

The pros of 12 power binoculars 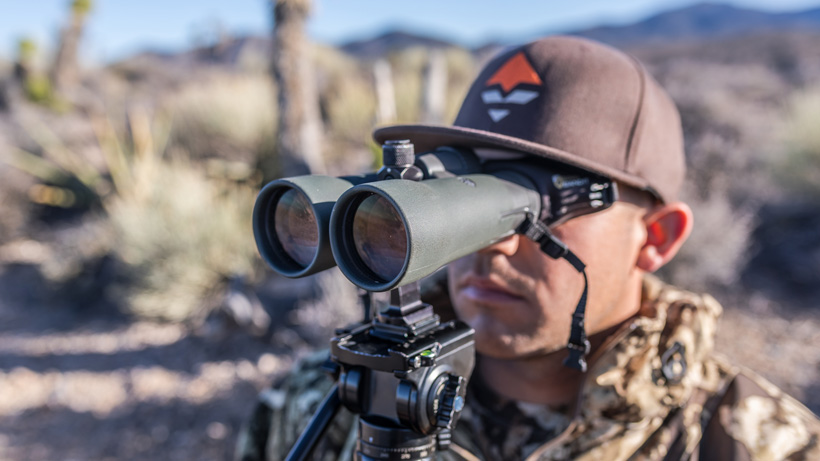 By running this setup, I’ve been able to cut roughly 3.25 pounds (53.06 oz) from my backpack. I switched from running my 15x56 binos, 10x42 binos and a spotting scope to just the 12x50 binos and spotting scope. These weight savings are definitely felt after a few days of hiking.

Hand holding with the 12s 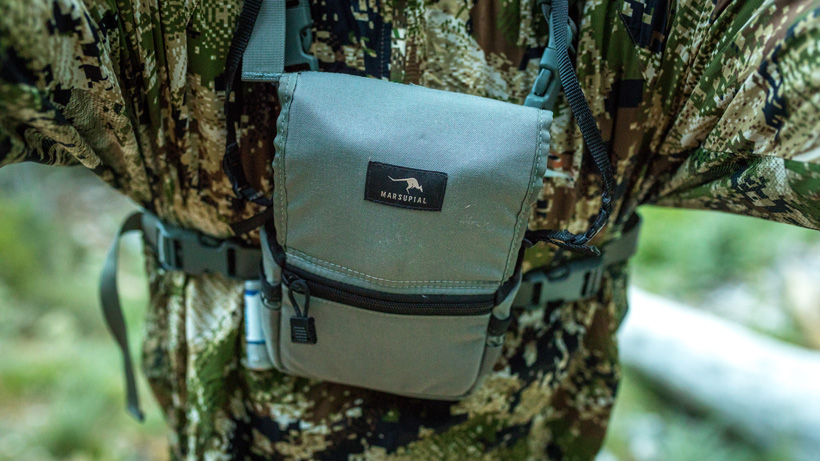 12s are still a great binocular for hand holding. During the 2017 season, I ran my 12s in a medium size Marsupial Bino Harness. They fit just fine and actually are even a little lighter than the Zeiss Victory SF 10x42s I had been running in the past. The Vortex Razor HD 12x50s are 29.20 oz compared to 34.23 oz of the Zeiss.

When hand holding these binoculars I enjoyed the extra magnification over the 10s I normally carried in my bino harness. I use the binos in my chest harness systems for a multitude of situations when making a stalk or quickly trying to assess stalking routes, animal movements while making a stalk, etc.

Glassing off a tripod with the 12s

12s are still a game changer while glassing off a tripod. Yes, you are giving up some magnification when compared to 15s and, trust me, I loved glassing all day with my 15s. However, I had to ask myself if the weight and bulk were necessary when I carried 10s, 15s, and a spotter and if it made sense to drop down in bino power. Would it make me miss seeing any animals? 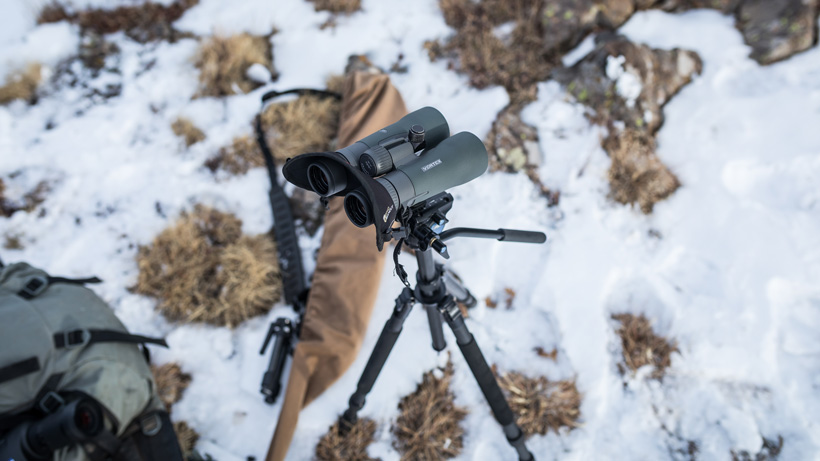 I actually believe that running 12s has lead to me spotting more deer. Crazy, right? Let me explain. When I ran 15s, I got really stubborn and decided to sit in glassing positions for a longer period of time and not move. I would just sit there and glass away with my 15s and spotting scope from that one position. By running 12s, I have found myself moving glassing locations more often. This was due to the slightly lower magnification in the 12s.

However, what this enabled me to do is to get better angles on the terrain I was glassing. I could sit in one spot for two hours and see some deer, but, after you have picked over the terrain for a while, moving a few hundred yards made all the difference in getting a new angle—a new view through the shadows where a big buck might be hiding. It was that moment where I realized that when I had 15s and a giant spotter, I started to rely on them too much like a crutch.

Having the 12s gave me that middle ground power that forced me to move around, which then lead to me spotting way more deer.

The cons of 12 power binoculars

With all the pros I just listed, you might be asking yourself what cons could these binoculars actually have. Well, the only downfall that I can think of—and while that downfall is very minor— is the extra power at extremely close distances. This could become a burden if you are under 40 yards from an animal and you are trying to quickly locate them in some brush.

Sure. More can be better. But like everything, you might just have to personally try out both. 15s can be great if you’re hunting Coues deer and driving from glassing spot to glassing spot with an ATV and have minimum hiking, but again, could you get by with 12s and a spotter?

Are they worth the switch? 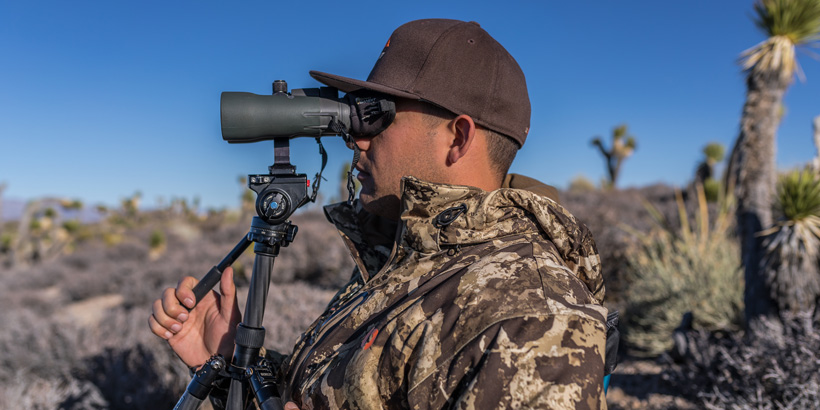 The answer to that question lies in your future needs and what you currently own. If I was to do it all over again, I would purchase a pair of 12s and I would love carrying them in mountain situations when weight is of the essence. Then, at the same time, I would still enjoy running these on weekend hunts or even situations when I am hunting close to my truck or out of a hotel.

The extra power doesn’t impede glassing with just your hands and maybe if you owned a pair of 12s you would finally see what you might have been missing after you mount them to a tripod.

Whatever brand of optic you select, I know you will be one step closer to having an incredible hunt. And remember…you can’t hunt, what you can’t see.