Antelope strategies for pre-rut and rut 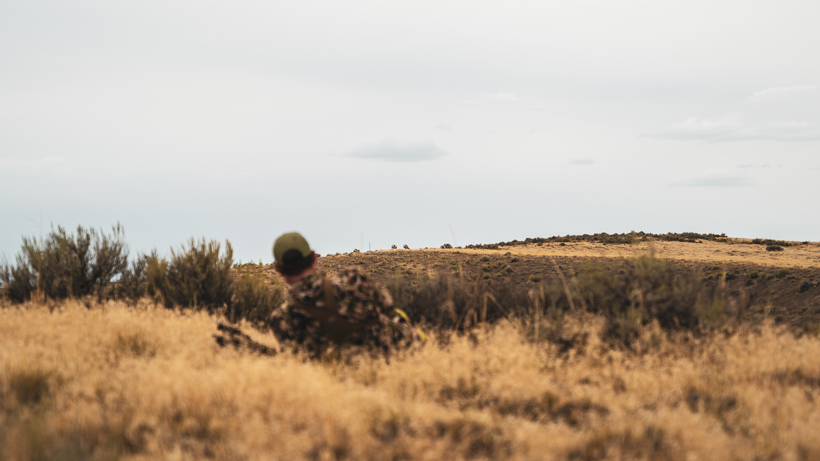 An antelope is one of the most misunderstood and misidentified animals in North America. Biologically, they are not in the same family as deer, mountain goats, elk or even similar-looking species in Africa. In fact, they are the only living species of animals that are in the Antilocapridae family and they only naturally inhabit the Midwest and western states of North America. An antelope stands about 3 1/2' tall and can weigh up to 140 lbs. Bucks grow horns that can reach up to 20” long and typically curve inward. They can hit speeds above 60 mph and rely mostly on their eyesight and speed to get away from predators. Antelope are active both during the day and the night and can easily pick out danger over four miles away. Antelope hunting is one of those western hunts that can test your patience one day and have you seeing more animals than you know what to do with the next. Chasing antelope all across the West is an experience that can become addicting and is considered one of my higher opportunity western hunts even though nothing is guaranteed. It is not uncommon to be driving down the road and see hundreds of antelope feeding along the highway; however, getting permission or finding them on public land is more of a challenge. After you find antelope on public land or get private land permission, here are some strategies that you can use for pre-rut and rut hunts in order to get close enough to put a nice buck on the ground.

As you probably know, antelope love to live in some of the most wide-open areas of the western states. Though they rely mostly on their eyesight to spot danger, they also rely on their speed to get them away from said danger. Sometimes a buck might even walk towards you in order to get a better look only to flee at speeds up to 60 mph once he realizes that you are a danger. When hunting during the pre-rut, there are two main strategies that I use with good success.

One of these strategies is to patiently wait in a blind near an actively used water source or a common intersection for antelope to naturally move within range. Hunting over water is a common strategy in some of the drier areas of the West, especially when using a short-range weapon such as a bow or muzzleloader. Hunting an intersection can also be very effective, especially if it is a natural funnel point caused by drastic terrain differences or fence line openings. Antelope can jump and go under fences, but typically like to move through openings and take the path of least resistance. If you have enough patience and are near a good number of antelope, you can definitely harvest a good buck this way.

The second pre-rut strategy involves spotting and stalking antelope. Most years you can have good luck by getting on a vantage point and glassing with some decent optics. Once you can determine a quality buck’s general direction of travel you need to plan a stalk. To do this, you must use anything in between to cover your movement. Sometimes there are nice ditch lines, undulating terrain differences or high sagebrush, but often it may involve you getting on your hands and knees and slowly working towards the buck’s intended direction. Pre-rut can be a challenge to get close to a good buck since they are not in a hurry to be anywhere; however, like any hunt, patience can pay off.

There can be nothing more action-filled and frustrating than chasing antelope during the rut. Prior to the rut, bucks seem to be slower moving, more predictable and an average hunter is able to work towards an intersection point in time to intercept the buck. During the rut, antelope can truly show their speed and be in your sight one minute and multiple miles away the next minute. During the rut, I also typically employ the aforementioned strategy of sitting over water or on a trail intersection or spot and stalk. Most antelope rut seasons generally have mild weather and bucks will wear themselves out so much that they need water multiple times a day. They also will move through intersections and pinch points more frequently as they chase doe around who are not ready to breed. If you can get multiple miles away from every road and patiently wait, eventually other hunters will push rutting bucks your way. A lot of states have rifle hunts during the antelope rut, making it a prime time to be out in the grasslands, sage hillsides and deserts chasing antelope. One major difference is that because bucks are rutting, you can often use a decoy to stalk within range. Sometimes, the bucks will even head your direction if they are rutting hard enough and you are using an antelope decoy. Overall, the strategies used during the rut may be similar; however, you typically will see more animals and require less patience to hunt this time of year, especially if you have a rifle in your hand.

Hunting antelope, pre-rut, revolves around finding their active habitat and taking advantage of natural animal behavior as they mosey around. The only guarantee during the pre-rut is that antelope will eventually need to head towards water and, hopefully, you are there or along the path to that location. During the rut, antelope behavior can be more erratic and setting up in a general intersection or far from the roads will prove to be an effective place to hunt. Patience and well-planned stalks are the name of the game during both times of the year; however, I typically see more bucks during the rut season, especially if it happens during a popular rifle hunt when hunting pressure can be high. Hunt hard and use goHUNT Filtering 2.0 to find units with high success rates and you should be able to employ any of these strategies this fall.