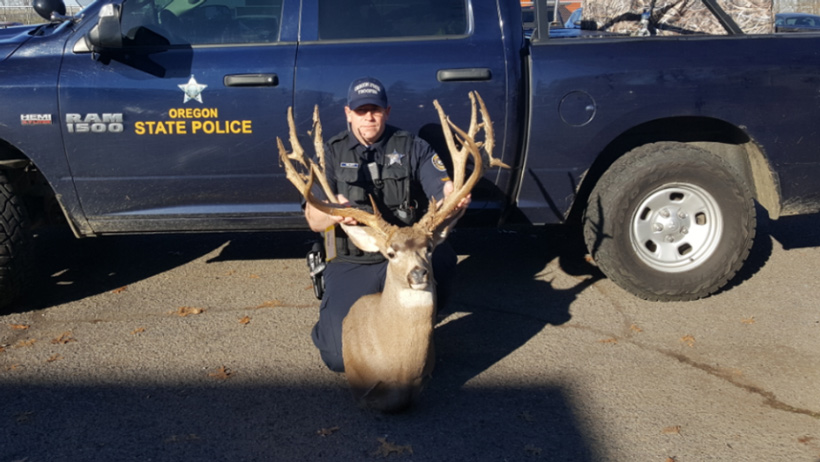 An Oregon hunter just learned the hard way that it doesn’t pay to lie, especially when that lie is tied to a supposed-state record. Kevin Howard Noel claimed to have taken the 8-point mule deer in the Steens Mountain Unit in 2015 with his bow and arrow. The buck “measured first that year” for nontypical archery mule deer and claimed “eighth all-time” in Oregon at the Northwest Sportsman Show, KOMO News reports.

However, in May 2018, police were investigating Noel concerning possible involvement with other crimes. During that investigation, Oregon State Police discovered that he’d shot the record-setting deer with a rifle even though Noel had claimed to take the deer during archery season with a valid tag, which, according to KOMO News, is illegal. Noel was arrested for the “unlawful possession of mule deer buck parts” and a jury found him guilty in November.

Oregon State Police seized the trophy mount. According to KOMO News, Noel has been sentenced to three years probation and 15 days in jail. He lost his hunting privileges for the next three years and was ordered to pay a $6,250 fine.

The title of the article is wrong. This guy is not a hunter. He obviously found this great buck during archery season and decided to cheat and use a rifle. That action then prevented anyone else hunting legally to have a chance at this animal. Premeditated Poaching.

What a D.B. pee pee toucher!

Glad he was caught however, this long after the kill how did they determine it was shot with a rifle?

He loses his privileges everywhere due to the The Interstate Wildlife Violator Compact which Oregon is a member of.
Good for him. He is not a hunter, he is a poacher and a thief.

This is sad. I personally hunt this unit when I can. With draw odd's I may only have a chance to rifle hunt here a handful of times in my lifetime, and have certainly never seen a buck of this caliber. Between the poachers and the cats, these bucks become harder to find each year. I hope his 15 days are filled with toilet wine and warm caress from Bubba.

He should get a stiffer sentence for being a poacher and stealing that animal from everyone in the country. I assume his hunting suspension is only in Oregon.

Your article should be titled "Oregon poacher used rifle, not bow, for record buck", he is no hunter. Hunter's are moral and follow the rules set up by the North American model. If we break the model we destroy ourselves and cease to be Sports Hunters ie. Sportsmen and Sportswomen ("sport" as in sporting chance for the game pursued per the laws and rules scientifically established).

I agree with you, we keep seeing these articles with limited loss of hunting privileges. Seems like there should be 10yr to lifetime hunting bans, seizure of the firearm (which is not noted in this case) and more jail time.

I agree. Ohio assesses a trophy fee for any illegal animal over a certain score. $500 plus $100 per inch as scored.

In my opinion he got off way easy. He flat out stole that animal from the state and every other resident of the state. In cases like this where he knew what he was doing was illegal, a 3 year ban from hunting seems like a slap on the wrist. Ya there is the money but I don't think he should be back in the woods for at least 10 years. Thoughts?