Wyoming veteran gets hunt of a lifetime 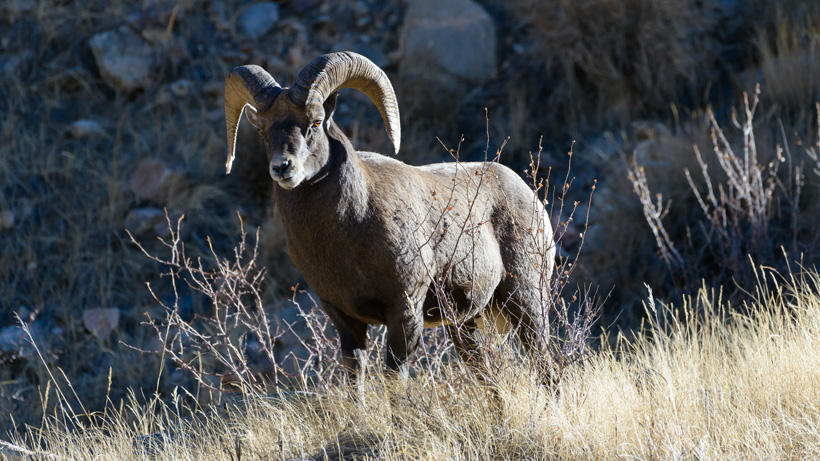 Thanks to the generosity of a Wyoming hunter, Nona Nissen went on the hunt of a lifetime last month. A retired lieutenant colonel in the Wyoming Army National Guard’s 1041st Engineering Company, Nissen didn’t have any previous hunting experience, which makes her bighorn sheep harvest a truly memorable experience.

The 29-year veteran initially agreed to a hunting trip with friends, unaware that it was going to be for such an epic animal. While she may not have hunting experience, she definitely knew what it was like being on “the other side of a loaded gun (and IED) plenty of times” when Nissen and her team moved supplies from Tikrit, Iraq to soldiers in Mosel, Kirkuk, Al Basrah, Baghdad and other areas during the Iraq War, the Wyoming Tribune Eagle reports. A single mother of three, Nissen finished her military career as “the leader of the most highly decorated Wyoming unit since the Korean War” with a Veterans Affairs-certified disability.

However, it was her relocation to Cheyenne and close friendships with other former Guard officers that brought her to her first hunting trip.

“I’d had a pretty horrible 2019 and was looking for a new path, and Matt (Huckfeldt) said, ‘Hey do you want to go hunting with Scott (Fink) and me next year?’ and I said, ‘Sure, why not? I’ll go,’ and I think I thought I’d just be walking around,” Nissen said. “Those two are hilarious, so I knew that’d be a fun time … lo and behold, four, five months later, Matt and his wife invited me over for dinner, and it was with Kyle and his wife.”

Enter fellow Cheyenne resident and three-time bighorn sheep tag drawer, Kyle Wendtland, who ended up drawing a tag for Area 12, which is “one of Wyoming’s top trophy sheep units in the northwestern Bighorn Mountains,” according to the Wyoming Tribune Eagle. Wendtland was interested in paying it forward.

“Both my wife and daughter are avid hunters and like being outdoors with me,” Wendtland said. “It’s pretty clear that women just don’t get these kinds of chances, in general, and I really wanted to have it for a long-term Wyoming veteran who is a female hunter.” 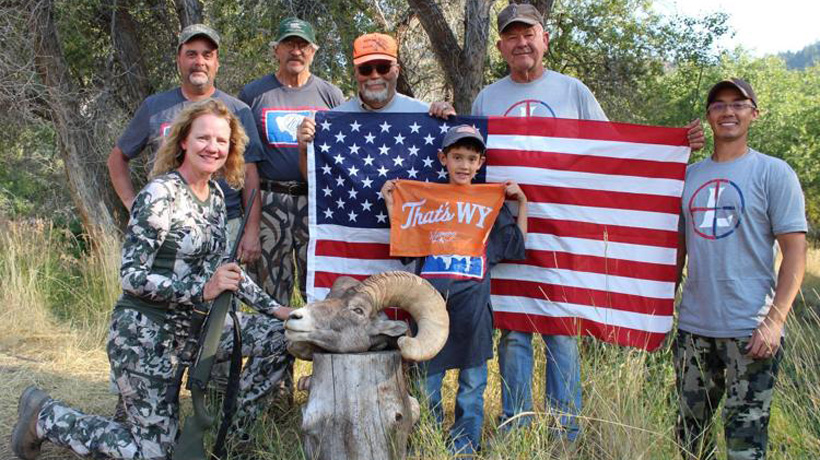 Nona Nissen, front left, and her hunting team with her once in a lifetime bighorn sheep.

According to the Wyoming Tribune Eagle, “Weatherby Inc. of Sheridan donated a 6.5mm Creedmoor Camila rifle; Teel Gun Works of Wheatland transferred the rifle; Leupold added a VX3i 4 to 14 scope, rings, bases and a pair of BX Alpine field glasses; Cari Goss and Azyre Gear of Sheridan donated a complete set of custom warm and cold weather clothing; Black Hills Energy and Marc Ostrem of Gillette offered five boxes of ammunition and a rifle sling; T and T Guns and Ammo of Gillette mounted the scope and volunteered their gun range; Mike McGrady of Cheyenne added a Mystery Ranch daypack; Lynn Stewart donated the taxidermy, and 14 of Nissen’s Guard friends pitched in to cover the trespass fee to access the hunt area.”

“I realized that what I thought was just a buddy hunt had become something much, much bigger,” said Nissen. “I was overwhelmed both with their kind hearts and, as the process of planning went along, … (by) the Wyoming residents everywhere contributing. Wow. There is nothing like Wyoming people.”

“Within a span of about 45 days, we had all these people come forward and were able to package the whole hunt for her at no expense,” said Wendtland. “Even in the midst of COVID-19 and the budget and all this stuff going on, all these people were like ‘Let’s go do it.’ … The reason we were able to put this trip together the way we were is because of these decades-long hunting relationships I have with folks, and it’s the opportunity to share that with someone who’s never had that chance – that’s a cool thing.”

Six days into her hunt, which began on Sept. 1, Nissen and her team stumbled upon a group of six rams, but she was unable to close in on them due to nightfall. The following day, they were able to relocate the group and, after a failed stalk, Nissen shot a ram nicknamed “Wyoming chocolate” for its “distinct color” at 234 yards, according to the Wyoming Tribune Eagle.

“Wyoming backcountry – there is nothing like it,” said Nissen. “It’s a very wild, vast and beautiful place, and it was very peaceful just to go from ledge to cliff to a ridge and get off the four-wheeler and scope and see if you could find any … it’s a centering experience.”

Congratulations to Nona Nissen on her amazing harvest!