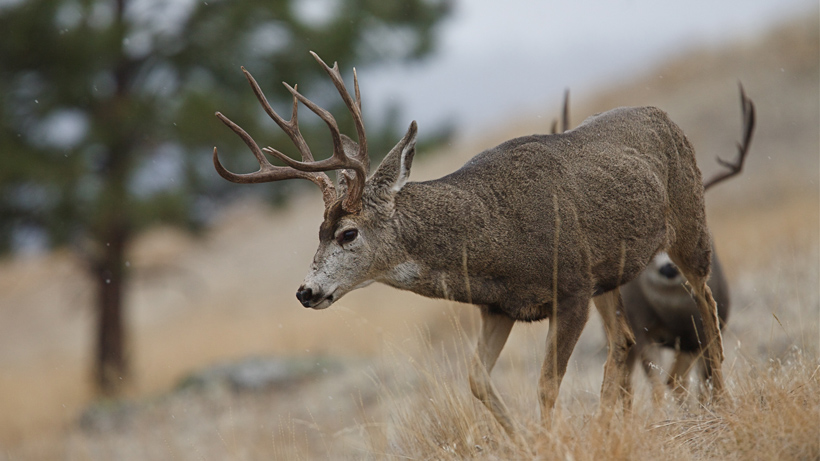 A lone mule deer doe has rewritten Wyoming’s longest migration route. Doe number 255 – referenced by her GPS collar – migrated further than her fellow herd members in 2016 after being collared in the Red Desert. She migrated beyond the Hoback – a distance roughly 150 miles from her summer grounds in southwest Wyoming – and into Island Park, Idaho: a distance of almost 250 miles, the Casper Star Tribune reports.

Through the Red Desert to Hoback deer tracking study, biologists were able to determine that 500 to 1,000 deer trekked to the western side of the Wind River Range where they “merged with another 4,000 deer,” who then traveled “through the Green River Basin into the Hoback,” according to the Casper Star Tribune. This particular migration has been dubbed the green wave because of how often it occurs and how many other animals utilize this same throughway to winter range.

“There’s all these different herds around the greater Yellowstone area that have figured out how to make a living on these big landscapes, which always entails wintering somewhere low and summering someplace high in the mountains where it’s really productive. And that’s their general recipe,” said Matt Kauffman, leader of the Wyoming Migration Initiative and the USGS Cooperative Fish and Wildlife Unit at the University of Wyoming.

Yet, doe number 255 traversed farther than other deer, leaving researchers wondering if she was a mere fluke in mule deer migration, whether she’d possibly join an Idaho herd, or return to her original stomping grounds that spring. Then, her GPS collar died and, because they could no longer keep tabs on her whereabouts, it was up to fate to make her position known. That lucky day happened last March while researchers with the Wyoming Game and Fish Department and the Migration Initiative were in the process of collaring 100 more mule deer does in the Red Desert. The pilot was ordered to capture any deer with a brown collar – the color previously used during doe number 255’s initial capture. According to the Casper Star Tribune, a graduate student made the discovery during the procedure; doe number 255 was back.

“We now know it wasn’t a fluke, she wasn’t dispersing into a different herd,” said Kauffman. “It was her migration.”

With this startling discovery, researchers say that other deer likely follow a similar route, which means that doe number 255’s 244-mile migration may not be a fluke after all. In fact, outfitted with a new collar, researchers are eager to see where she goes.