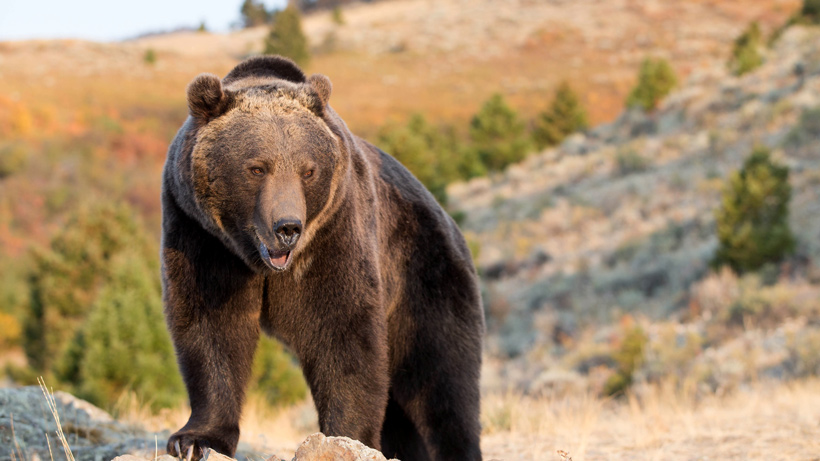 Wyoming’s grizzly bear hunt may actually happen. Last week, the Wyoming Game and Fish Department (WGFD) finalized its draft regulations for the controversial hunt. Now, it’s up to the state’s wildlife commission to approve the draft and open the door to one of the first grizzly bear hunting seasons since 1975 when the bears first received federal protections.

As goHUNT previously reported, the animals lost federal protections within the Greater Yellowstone Ecosystem in 2017. While Montana recently announced that it was not planning on holding any sort of grizzly bear hunt this year, Wyoming has been considering it and has held several public comment sessions to hear from area residents on the controversial subject.

According to the Casper Star Tribune, the proposed regulations state that a maximum of 24 bears could be killed during the hunting season with only 12 (two female; ten male) of them “allowed to be killed in what is called the demographic monitoring area” – a portion of the state that borders Yellowstone and Grand Teton national parks. This area is considered prime grizzly bear habitat. The other 12 bears (of any sex) can be killed in areas deemed unsuitable grizzly habitat as well as “areas where they consistently cause conflict.”

“It provides for a very conservative hunting season using the quota that is pretty much prescribed by and calculated by a formula in the conservation strategy and tri-state memorandum,” WDFG Chief Game Warden Brian Nesvik told the Casper Star Tribune. “It spits out a number and says we can’t take out any more than this number of females and this number of males.”

Nonresidents will have to pay $6,000 for a license while residents will pay $600; six of the 24 licenses will be reserved for nonresidents, the Casper Star Tribune reports. Other specifics of the proposed regulations include:

The Game and Fish Commission will vote on the proposal during its May 23 meeting.

Suit yourself. But, I'm here to tell you, the average sportsmen isn't going to write a nonrefundable check to Wyo F&G for $600 for an app. You think F&G hasn't already been spending millions on grizzly management. It's already figured in to their budget. Just because they are thinking of having a season on them doesn't mean hunters should be footing the entire bill for it, which they already are through already established license fees. Outfitters are charging $7500 for elk hunts in that area already, and have been for decades. You think they won't charge over $10k for the first grizzly hunt in decades in that area? You don't understand the free market I guess. Supply and demand, very little supply, high demand. No way they do a grizz hunt for less than an elk hunt, especially with the public backlash they'll have to deal with.

Christopher
What's so crazy about that? Do the math. Wyoming is set to make $46,800 off all the licenses. Won't even pay the wages for one biologist. Grizzly bear management is going to cost the state of Wyoming millions of dollars. Sportsman, otherwise known as conservationists, need to help with management. Non-residents should be required to pay the same $600 non-refundable. It's not a crazy idea. And I don't think any Outfitter is going to get any clients if they're charging $12,000 for a hunt. A non-resident with an Outfitter and the license is still going to be able to hunt a Grizzly a lot cheaper than in Alaska. I will be more than happy to put in for non-resident tags in Idaho and Montana knowing that there is going to be money set aside to help those states with managing the Bears also.

Are you saying you want to make the $600/$6000 fee nonrefundable just to apply? That's crazy. The antis would do that, but not many sportsmen are willing to write a $6000 check to Wyoming for a lottery ticket, which is what these odds will equate to. Around Yellowstone any NR that draws a tag will have to hire a guide anyways as it's mostly wilderness. It'll end up costing as much as an Alaska hunt.

What a bargain for a non resident. I could not go to Alaska and kill a brown bear for under 18 grand. The anti Hunter movement is monitoring this closely. They are telling members in certain organizations to apply for these tags and just sit on them if they are successful drawing the tag. The only way to combat this mentality for the better will be for Wyoming to make the fee non refundable. Sportsmen from Wyoming need to push a non refundable application fee for the full amount which will make non hunters applying, surrender the fees for the betterment of management of these bears. I surrender alot of money every year applying in various states. It's just part of the game.

Glad to see this. Hopefully the season goes through and happens!

I bet hunting a grizzly without a guide as a nonresident would be extremely difficult logistically. Non residents can't DIY hunt wilderness areas in WY without a guide, and the "Demographic Monitoring Area" they describe is mostly wilderness. I would assume unsuitable grizzly habitat and areas of conflict would translate into private land, also most likely leased to a guide.

6000 is a deal or a dyi grizzly hunt compared to a guided hunt up north.

Yes and people will pay the 6,000. Its no different than professional sports tickets. Until we quit showing up the prices will keep going up.