Wyoming guide under fire for leaving pack horse behind 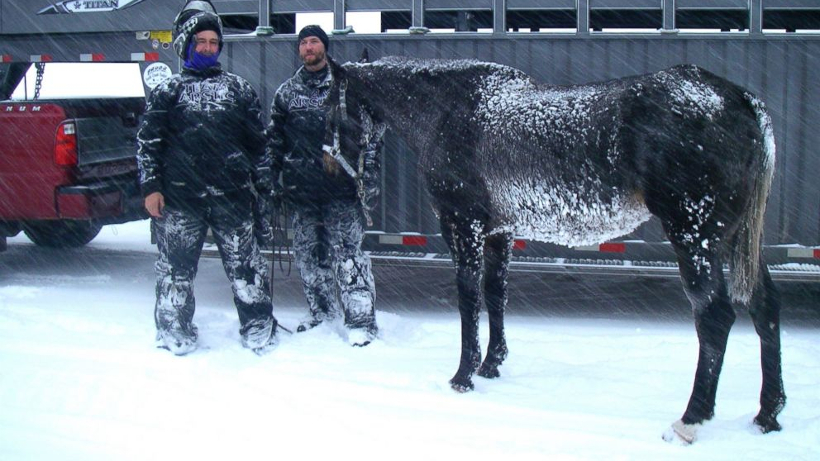 B.J. Hill had to make a decision – and he had to make it fast. Bad weather was closing in and one of his horses – a six-year- old mare named Valentine – lay down 16 miles up a mountain. She wouldn’t budge, despite attempts by Hill, who runs Swift Creek Outfitters in Wyoming and owns the horse along with 125 others. He decided to leave her in order to get the other animals off the mountain before the storm hit. It wasn’t the perfect decision, but Hill couldn’t put her down, despite the fact that she was a domestic animal left behind in grizzly country in the middle of a snowstorm.

“She was down, but she's too nice of a mare to go shoot for God’s sake,” Hill told The Associated Press. “She did what we figured.”

Fortunately, the story has a somewhat happy ending. Even though Hill says his son tried to find her the next day, Valentine had disappeared. Hill speculates that she could have left the spot where she lay in search of water or because she felt threatened by predators. Either way, six weeks later, she was found in good condition by a worker grooming snow trails in the Bridger-Teton National Forest; Hill, his son and a Forest Service employee spent nine hours leading the mare out of the wild by a snow mobile, according to The Associated Press.

The fact that the horse survived and didn’t even need veterinary care is nothing short of a miracle, considering how long she was out in the wild in severe winter conditions. Yet, local residents wonder if Hill could have done more. Should he have left the horse or done something to ease its suffering?

Regardless of public sentiment, Hill may face charges for leaving his horse behind. According to The Associated Press, the incident is currently under review by the Wyoming Board of Livestock, which, upon the result of its investigation, may bring criminal charges against Hill. At least Hill goes into this investigation without any previous history of criminal wrongdoing. According to senior criminal investigator Ken Richardson, investigators couldn’t find any history of this type of behavior – or any unlawful activities – by Swift Creek Outfitters. Additionally, Todd Stiles, a Bridger-Teton Forest district ranger, says that “the company’s annual permit review has consistently attained the highest rankings, which include treatment of horses.”

Sounds to me like a tree hugger got ahold of the story and blew it up. Unfortunate

As someone that uses our horses for hunting and pleasure, If we had a horse that went down, we would get the others to safety and then go back for the one that went down. He made a choice to save 25 other horses AND his guest. They tried to locate the horse, but she had moved. He had to make a judgement call and did so to the best of his abilities. We go up into the mountains, fully expecting to bring our full string home. Things happen, people get sick/hurt and animals get sick/hurt. Do you sacrifice everyone to save one? NO. My horses are my kids, but if I had to leave one to get the rest to safety, then I would do so. I would also go back for the one left behind. As did this man.

If the story is correct as written, this shouldn't be a story. His horses, his decision, certainly a difficult one. Appears to be a responisble animal owner that did the right thing with a positive outcome.
Is there no end to our culture of outrage?

I strongly agree with Dennis B.

I'm feeling that the guide crew made the right decision as they evaluated the incident facts at that time. It is always so easy to look back and be critical, but that crew was on the trail, on the ground, and made the decision in real-time. While it is unfortunate that the horse was lost for six weeks, Valentine will be a great mountain horse in the future because of that experience.