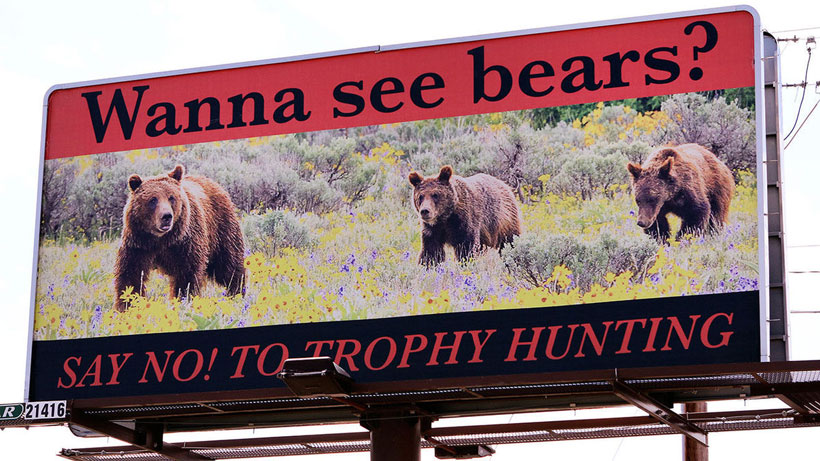 In what appears to be a billboard battle, Wyoming hunters and wildlife advocates have taken to the streets with larger than life messages to purposely anger each other. The latest 14’ message, which appears on the Big Horn Avenue billboard in Cody, WY, takes aim at trophy hunting. The billboard features three grizzly bears along with the message, “Wanna See Bears? Say No! To Trophy Hunting.” The Wyoming Wildlife Advocates of Jackson (WWAJ) are responsible for the advertisement, which is in response to an April 2016 message paid for by an organization called the Wyoming Sportsmen that read, “Wolf, Griz, Delist, Hunt.”

While WWAJ Executive Director Roger Hayden admits that “We like to stir up [crap], especially over there [Cody],” he says that the billboard isn’t specifically targeted at Cody residents; instead, he says it’s to sway tourists and visitors to Yellowstone National Park, according to the Cody Enterprise. However, because Cody residents are likely to be the ones to view the billboard frequently, it’s hard to believe that the advertisement won’t anger those within the community that support hunting.

As goHUNT previously reported, Wyoming (along with Montana and Idaho) have moved forward with state management plans, which include proposed hunting seasons for grizzly bears. Additionally, Wyoming will likely hold a wolf hunt should the federal protections be lifted in time to plan one. The hunting of both grizzly bears and wolves is a touchy subject among opponents to delisting. The billboard battle only elevates the controversial topic to another unavoidable and extremely visual level.

Hayden told the Cody Enterprise that WWAJ is against trophy hunting – bears included – not hunting in general. Of those who have offered feedback on the billboard, one commenter promised to send photos of his trophy grizzly bear and wolf once harvested, adding, “P.S. I’ll be sure to put in for an Elk Refuge/Teton tag, as well. Elk populations should rebound nicely once we get wolf and grizzly populations in check.”

Have you driven past this billboard (or the previous billboard)? What do you think?