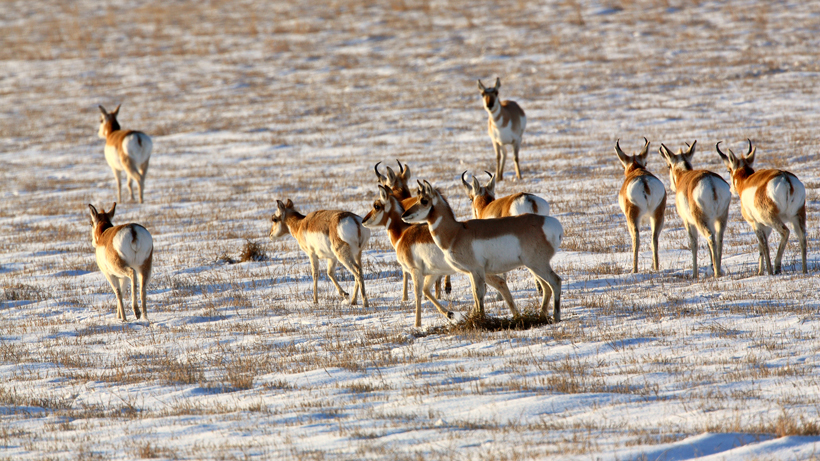 “My goal with this Executive Order is to identify solutions that would both protect our wildlife and support our economy through the multiple-use of public and state lands,” Gordon said in a statement. “I want to thank the advisory group for working collaboratively to deliver a strong and balanced set of recommendations which have been incorporated into this draft.”

The draft order is a balance between maintaining healthy herds that use these migration corridors and not hindering any economic growth. It incorporated recommendations from the Migration Corridor Advisory Group, which was established last May. Those recommendations included modifying “how the state formally designates a corridor for protection” and “launching local working groups” before a route was officially labeled as a migration corridor, according to the Casper Star Tribune. Based upon the draft language, the Wyoming Game and Fish Department would be responsible for gathering scientific data for prospective migration corridors before an “in-depth evaluation and risk assessment” was completed. Then, Gordon would work with local residents and stakeholders to gather additional insight before deciding to designate an official migration corridor.

“I think that the governor and his team did a really good job at trying to capture the intent of our recommendations,” said Marissa Taylor, who served on Gordon’s advisory group. “From a rancher’s perspective, I was happy to see that Wyoming is taking a leadership role in putting language to ... recognizing (landowners for) housing the corridor.”

According to the Casper Star Tribune, landowners interested in voluntarily working with the state to help “sustain identified corridors” will receive recognition as well as some financial support.

Of course, oil and gas development and how it will be handled is also part of the draft order. According to the draft language, “activities existing or permitted in designated migration corridors before Feb. 1, 2020 … will not be required to be managed under this Executive Order.” These “activities” include oil and gas, mining, wind energy, agriculture, highway development and more. Members of The Petroleum Association of Wyoming hope to find “a healthy compromise through the set of guidelines proposed in the draft order,” according to the Casper Star Tribune.

“While we carefully review all of the potential impacts of the Executive Order, we appreciate that Governor Gordon understands the need for balanced, multiple-use policies,” Pete Obermueller, president of the association, said in a statement. “Wyoming can support big game health and at the same time encourage the development that supports Wyoming. Case-by-case analysis that invites input and fairly accounts for all impacts to wildlife, from human recreation to subdivision development to oil and gas, is an honest approach and we thank Governor Gordon for his leadership.”

A final executive order will be released early next year.

"Unlimited grazing rights" is the real underlying issue in the west. It has went on long enough.

When the animals reach the winter grounds there isnt hardly any feed left from what the cows have eaten. Its a sad state of affairs.

Our Governor is on our side however, our legislators are not, they are the enemy! Ranchers lead blindly by the cattleman's association and Wyoming guides and outfitter association. Hunters and Anglers in Wyoming need to look deeper into who they vote for. Scanning through the ballot for an (R) and looking for political ads brandishing cowboys hats, carharts, and horses is getting us no where.