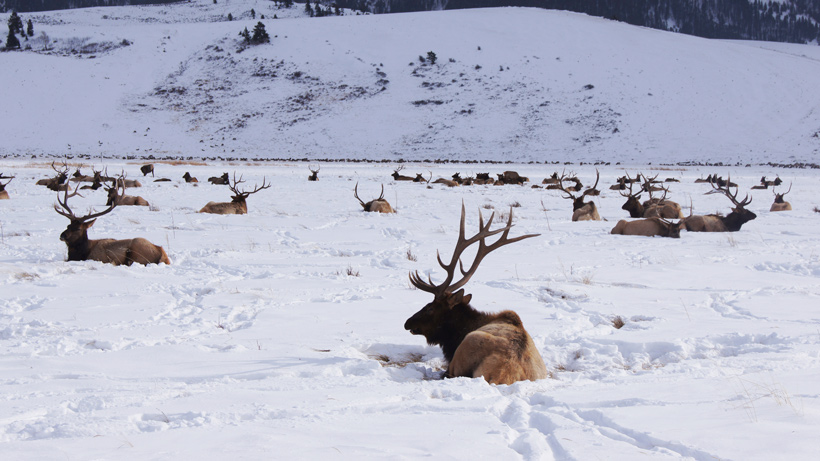 Shed hunting is a popular off-season activity, but, depending on how severe the winter has been, can cause stress to animals just trying to survive. In most parts of the West, shed hunting is not permitted between Jan. 1 and April 30 (with some limitations). In Wyoming, that’s the current shed hunting season; however, there are two new bills that would allow Wyoming Game and Fish Department (WGDFD) officials “more flexibility to manage the collecting of antlers,” Wyoming Public Radio reports.

"We get people on both sides," said Todd Graham, WGFD’s Green River area wildlife manager. "On easier winters, some people want us to open the season earlier and then on harder winters, sometimes it would be nice to keep the antler season closed a little longer into May to prevent further stress on those big game animals."

However, bighorn sheep, elk and mule deer feel the intrusion of shed hunters, especially when they are trying hard to survive severe weather and high snowpack. If WGFD could determine the health of the herds prior to the start of the shed hunting season, it could benefit the overall health of these herds and limit humans from critical winter ranges.

The bills are currently in the Wyoming House for consideration. Stay tuned to goHUNT for further information.

@Mathew A. - Sorry I read right over this last week and just changed it. Too much going on with Shot Show and I guess my brain was fried.

Wyoming's current law does not allow shed hunting "until" May 1st at 12:01 AM.

I propose that they issue me a special season, special tag effective immediately for that winter range in the picture.

That one would look good on my wall.

@matthew a. I was about to comment the same thing :).

Why not must make it Jan 1-May 1 and leave any room for mis-communication to cause someone to lose their hunting privlidges. A whacko-mole law doesn't help anyone.

Why not must make it Jan 1-May 1 and leave any room for mis-communication to cause someone to lose their hunting privlidges. A whacko-mole law doesn't help anyone.

Idaho has a ton of snowmobile restrictions in place for winter ranges but it seems is not policed. I have also struggled finding information and maps of winter range travel restrictions. Some (definitely not all) folks don't even know they are somewhere they shouldn't be.
I am a lifelong, avid and responsible snowmobiler and I agree with you Andrew S. There is plenty of open country available to snowmobilers and tracked ATV/SxS drivers so stay the heck off the winter range! Knowledge and enforcement needs to increase in Idaho and I would guess most western states.

Don’t try regulating shed hunting without shutting snowmobiling in these areas down completely. We don’t stress these wintering animals even close to the level that loud, fast snow machines do.

Personally, I think they need to shut it down until mid March. I enjoy shed hunting but at some point we need to give them a break. In Idaho, there are landowner tags clear through January. We can't run them from August through February and expect them to do well...regardless of how good or bad winter might be. I hope they find a compromise to let people shed hunt but also give the animals a break.

Sorry to be "That Guy" but, I think you meant to say that: "In most parts of the West, shed hunting is NOT permitted between Jan. 1 and May 1

https://wgfd.wyo.gov/News/Shed-antler-and-horn-hunting-closes-Jan-1-many-ar
"To protect wintering big game, a Wyoming Game and Fish Commission regulation prohibits anyone from collecting shed antlers or horns on public land, such as U.S. Forest Service and Bureau of Land Management lands and Wyoming Game and Fish Commission owned or administered lands west of the Continental Divide, excluding the Great Divide Basin, from Jan. 1 through April 30 of each year."