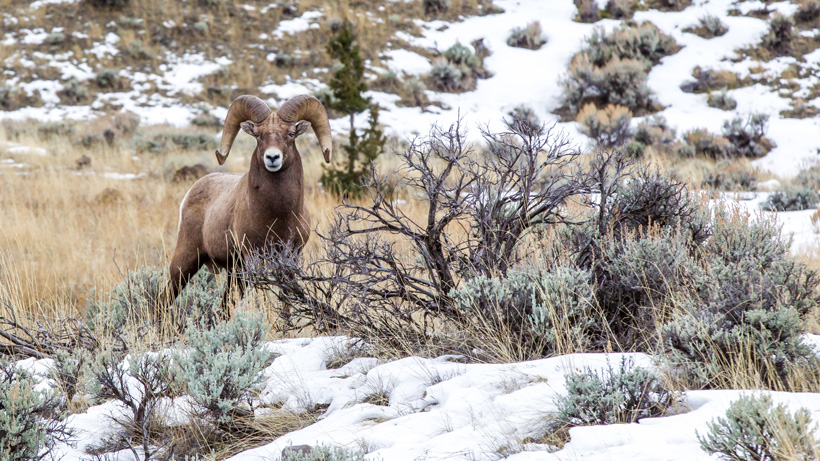 Western wildfires have left fresh, forest-free, habitat for bighorn sheep that live in northern Colorado. The Big Thompson and St. Vrain herds—herds that have struggled for decades and have been supplemented with relocated sheep in order to keep them going—appear to be finally stabilizing. Why? Because wildfires have created better habitat in these particular canyons, the Associated Press reports.

“Sheep typically don’t like closed in areas with a forested canopy so when you have major landscape changes such as a fire, it's usually pretty beneficial for the sheep,” Ben Kraft, a wildlife biologist for Colorado Parks and Wildlife (CPW), told the Associated Press. “The Big Elk Fire and the fire on Kenny Mountain (in 2002) certainly benefited these sheep.”

Like so many bighorn sheep herds within the West, Colorado’s Big Thompson and St. Vrain herds have experienced massive die-offs most recently due to disease and, historically, due to over-hunting, which occurred in the early 1900s. Domestic livestock graze in close proximity to their habitat, which extends along the Front Range, bringing wild sheep into contact with diseases spread by their domestic counterparts. However, in 2002, additional habitat was created for these two herds, allowing them to have more distance from the possibility of disease, according to the Associated Press. And, now, with better habitat as a result of wildfires, CPW is hopeful the herds will continue to rebound.

“When disease comes into a bighorn population you have the potential for all age die-offs for up to five years and after that, you can see lamb recruitment really fall off,” said Kraft. “Sometimes that reduced lamb recruitment can last for several decades.”

Fortunately, this year’s lamb-to-ewe ratio was high—at 70-to-100—which could be proof that the herd health is on the upswing.

“The take-home message is we've got a stable herd out there thanks to very carefully managed hunting, but that there is probably room to grow,” said Janet George, the Senior Wildlife Biologist for CPW's Northeast Region. “The area could support over 100 animals in total and we're hoping that we get there at some point, but a lot of times the population trend is more important than the total numbers. There's also evidence of lion predation that may be contributing to the reduced size of the herds.”