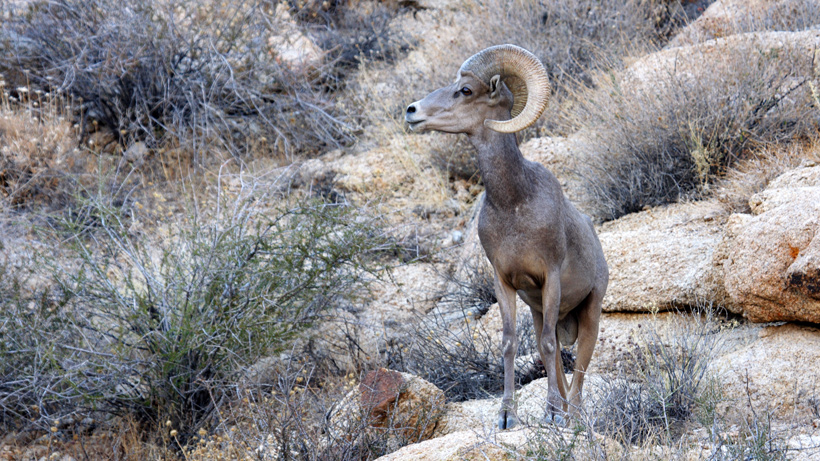 Pneumonia could be behind the recent deaths of 20 desert bighorn sheep in the San Gorgonio Mountain in Southern California. However, while the wild herd may have come into contact with domestic sheep or goats—known carriers of bacterial pneumonia that has caused massive die-offs in bighorn populations across the West—biologists are also considering other factors. For instance, it’s possible that the deaths are from other pathogens that can be traced to feral cattle just west of the herd or another bighorn sheep herd found to the south, the Desert Sun reports.

“Since the beginning of December, I have recovered 20 dead sheep, and I suspect that’s just a portion of what’s occurring,” Jeffrey Villepique, a wildlife biologist with the California Department of Fish and Wildlife (CDFW), told the Desert Sun. Villepique is leading the inquiry into the bighorn deaths.

The herd has called the region from Mission Creek and Whitewater Canyon to Mt. San Gorgonio home for a long time. Roughly comprised of about 200 bighorn sheep, Villepique’s current observations of the sheep herd is “less than a third of the numbers of live sheep they would expect,” according to the Desert Sun. And it’s not just young lambs or ewes. Villepique says that whatever is killing the bighorn sheep is not age-specific—and could be spreading rapidly.

“It’s really tragic,” Jack Thompson, regional director for The Wildlands Conservancy, told the Desert Sun. “The bighorn sheep are such an iconic species for the California desert.”

Reports of dead or strangely acting sheep began last November with the first dead sheep found along the road on Nov. 15, north of the unincorporated community of Bonnie Bell; another dead ram was discovered nearby—"in a riverbed in the same area,” according to the Desert Sun.

“It was walking in a fashion where it obviously seemed like it was having some kind of trouble,” said Thompson, of a bighorn sheep encountered north of Bonnie Bell. “It was confused and should have been more disturbed by the presence of people. That was the first time we saw one that we said, ‘There’s obviously something going on here. This is a sick animal.’”

Since the first ones were discovered, Villepique has gathered remains of most of them, including seven young rams or ewes from Whitewater Preserve and two more from the Bonnie Bell community. He plans to analyze the bodies and try to determine how the animals died.

“I hope this conveys the vulnerability of these majestic animals, that we as people need to do our best to keep them from the threats,” said Villepique. “It’s a reminder of the need for ongoing vigilance.”