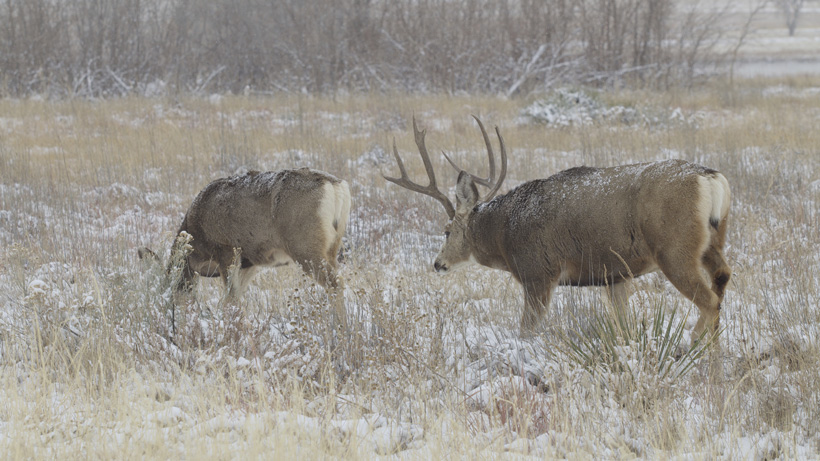 Weather can make or break a hunt and it definitely played a major role in Montana’s big game opening weekend. While cold weather mixed with snow is usually a perfect storm for deer and elk hunters, last weekend’s weather was just too severe. In fact, overall hunter and elk harvest numbers were down at Montana Fish, Wildlife and Parks’ (MFWP) Darby check station, according to the Missoulian.

“On Saturday, the visibility was really, really bad,” said MFWP’s Bitterroot-based biologist Rebecca Mowry. “Hunters were having a hard time getting around, and I think animals were hunkered down. On Sunday, it was super cold.”

“It definitely felt slower,” said Mowry. “On that first day, I was hearing from hunters coming out the Big Hole that they were getting stuck. Some said they felt like they were lucky to have been able to get out.”

Due to bad roads, Mowry closed the check station early during both days.

“We also had some people driving past the check station,” said Mowry. “I saw people in hunter orange who didn’t stop. The people I flagged ... down said they didn’t get anything. It doesn’t matter. If you’re hunting, you are required to stop at check stations.”

And it wasn’t just the Darby check station that had lower numbers – all of the stations in western Montana were impacted by the severe weather conditions.

Overall, the 2020 opening weekend tallies had 1,575 hunters using the Darby, Anaconda and Bonner check stations (compared to the 2019 total of 2,325 hunters) with a total of 76 elk, 12 mule deer and 43 whitetail deer (compared to the 2019 tallies of 99 elk, six mule deer and 71 whitetail deer), according to the Missoulian. While lower than average, MFWP anticipates more hunters once the weather changes.

“If it warms up as predicted, hunters could find crunchy snow conditions making travel more difficult and noisier, but we’ll have more animals moving around which is a good thing for hunter success,” said Missoula-area wildlife manager Mike Thompson. “It’s been an interesting start to the season for sure.”

Were you out during opening weekend?