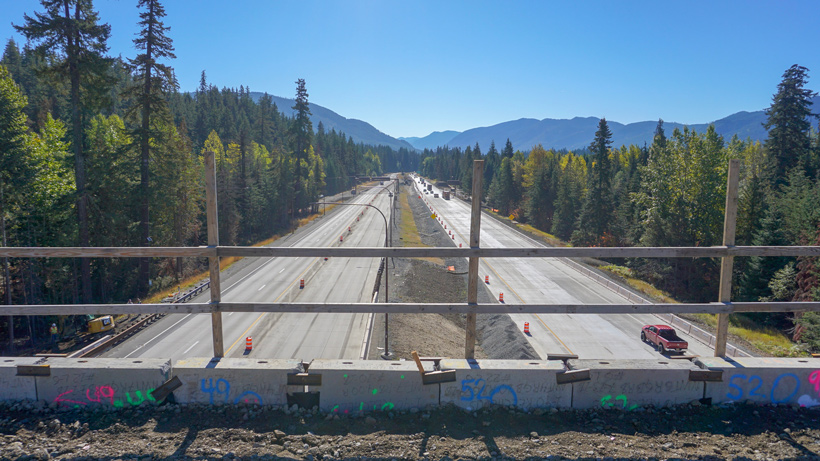 Wildlife has a tough time with traffic. Whether its mule deer trying to cross a busy highway or foxes traversing a residential road, navigating can be tricky and often results in vehicle collisions. Washington has a new wildlife crossing underway over I-90 east of Hyak and Snoqualmie Pass – a highway where 29,000 cars zoom by daily – that includes both an overpass as well as three nearby riparian underpasses aimed at “providing safe passage” for those animals that live near this busy highway, Crosscut reports.

While still in progress, the project is a positive one and has those involved with its construction incredibly optimistic that it is exactly what wildlife need in this area.

“Later this year there’s going to be walls, native soils and plants will take over, and it will be seamless habitat for animals,” Patty Garvey-Darda, a biologist with the Okanogan-Wenatchee National Forest and an advisor to the Washington Department of Transportation, told Crosscut. “The undercrossings have streams in it, and are great for riparian-following species like small mammals, amphibians, and Cascade fox. The overcrossing works well for high-mobility species like elk, deer, bear, and wolves. We’ve got cameras in all of them, so we’ll be able to monitor rare animals like wolverines and martens. The cameras will tell us a lot.”

According to Crosscut, the $6.2 million overpass, which will be completed by spring, is part of a $900 million project that will add 24 more wildlife crossings to a 15-mile section of the interstate. The project brings together experts from Conservation Northwest, the Washington Department of Transportation (WDOT) and Central Washington University. Since the project began three years ago, workers have used trail cameras to catch elk, coyotes, mule deer and the occasional sockeye salmon trying to cross the highway.

“The biggest hurdle is always, ‘what do you do with all the traffic,” said WDOT Assistant Regional Administrator for Design & Construction Brian White. “Initially, we were trying to get closer to the headwaters of the Yakima. But great data from Conservation Northwest and Central Washington University showed this is where the animals are actually crossing. You need to fit into the context of your environment, and here that means wildlife can walk unimpeded through habitat.”

“We’ve been advocating for this for over a decade,” said Conservation Northwest’s Chase Gunnell. “We thought, there has to be a way to knit the landscape back together for expanding species like wolves, cougars and black bears while improving the lives and safety for people. It was about harnessing a larger effort, to say ‘look, we can build bridges — this is happening.’”

The project is expected to continue through 2030. When it’s done, all those who worked on these wildlife passages will know that their involvement helped restore an important ecosystem within the Cascades.