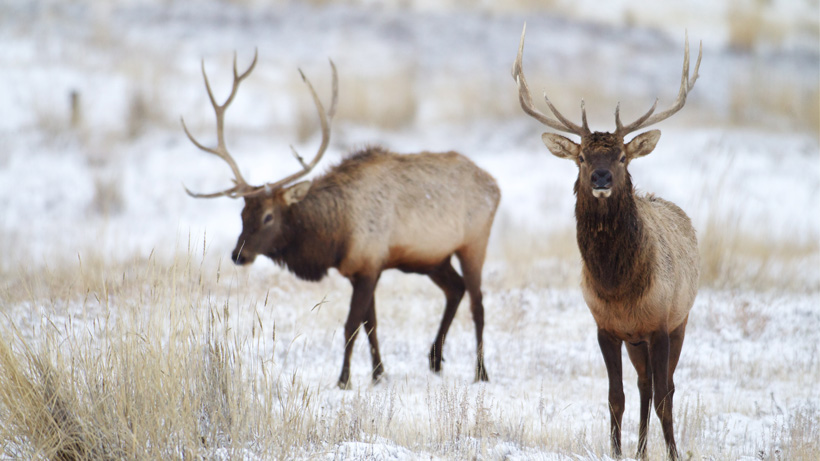 Elk are magnificent animals to spot in the wild, but in Central Washington, residents are seeking solutions to the prolific Colockum herd. This herd is comprised of about 6,500 elk – elk that damage irrigation lines and hay storage and caused about 60 motor vehicle collisions last year. The Colockum herd, which typically roams between Wenatchee, Ellensburg and the Columbia River, migrates to lower elevations in search of food, which results in issues for area residents, the HeraldNet reports.

“We don’t want (the elk) to go away,” State Representative Tom Dent (R-13) told the HeraldNet. “We want to coexist.”

Dent, who is also a Moses Lake rancher, is sponsoring legislation that will hopefully help rectify these elk-related issues. He listened to various ideas that were discussed at a recent meeting with ranchers, farmers, sportsmen, transportation and wildlife officials. These ideas included installing wildlife fencing in key areas and holding managed hunts. Based upon these discussions and feedback, Dent has proposed a new pilot program that “calls for the state Department of Transportation (WDoT) to investigate the costs of installing elk-proof fencing” along area highways to keep elk off the roads; WDoT has already installed a fence barrier near the “right-of-way fence along the highway,” according to the HeraldNet.

If the pilot program is successful, Dent hopes to expand it across the state.

Because there is no state funding for the fencing program, various wildlife and hunting organizations have volunteered to help get the fencing installed – an activity that has occurred in other states facing similar funding/wildlife fencing issues. Dent says that they also considering two other options: a special hunt in the Thorpe area where harvested meat would be donated to local food banks and allowing farmers and ranchers depredation permits that allows them to kill “elk straying onto their property,” according the HeraldNet.

If you hit a cow on the road, you or your insurance is required to pay for that cow. The person who hits an elk should be responsible to pay the state for how much a non-resident tag would cost. The state could then use this money to implement wildlife fencing and easements to protect the elk.

Hey everyone. I just want to post a reminder to keep it clean when you're responding to articles you're passionate about. There's no need to say the foul language that has been used in these comments. I know certain topics can drive emotions, but please, keep things clean so we can all have a great discussion and hear out everyone's thoughts on the subject.

I'm going to remove several of the comments right now to clean things up. So if your comment gets deleted, it's because of the language and name calling toward other users. Thanks for understanding, and I hope you all have a great weekend!

Ive hunted these damage tags and been an loads of the damage tag hunts i mean 10 elk being killed in a sigle.morning the just give out more tags in bad winters the elk go no where you shoot one the go 400 yards and stop go het someone else with a tag go out shoot another one and theyve been doing this the last 4 years i hasent worked in this case its just killing elk

Cutting back on the amount of domestic grazi g on public land would be a start ,drive up through the clockum and nanuem ares during the summer and fall months and youll most likely see cattle everywhere and no elk ,just saying

One of the things I hate about these special hunts is that the people who are complaining about the animals won't let hunter hunt on their land. I have drawn a couple of these type of permits and when I went to ask to hunt on properties in the area, they didn't want anyone to hunt on the property. I respect landowners rights, but if you are complaining to the State about animals destroying your land and they are being paid by the State, then they should have to make these landowners allow hunters to hunt the animals or they don't get the money from the State for the damage, let their insurance company pay for the damage.

This article is full of BS. People need to check facts before posting this type of non sense.

If the herd is getting out of hand as they are claiming, then instead of spending more money on fences, why not open up more hunting opportunities and make money? Rather than spend more? Even archery is “spike only” or “spike and antlerless” in any respectable elk country in Washington.

They putted to good use. You got to learn how share and all things balance out for good. Being selfish cause to many slks.

I've been filling out Hunter survey card and submitting to the Navajo tribe if it's possible to import more elk. From areas that have problems with them like in the Dakota's some years ago. Thx.

Wolves and grizzlies would solve the problem.

Well, Mr. Dent may have been told by the department that the herd was too large, but truth be known, we've been making our herds smaller and smaller over the last 30 years in this state, as people encroach on their winter grounds and then complain about depredation. Allow the public to them while they are on public ground, not once they get on private ground. Then it's a good 'ol boy's club shoot.

The same ranchers turn you away when out seeking permission. Very few people will allow you to hunt on private land in the Ellensburg area. I can already see how this will go...rancher gets depredation tags and gives them to buddies. Thus no public access to a public resource!

This is not good, they went from true spike only to true spike only and cows. The population has taken a hit over the past three years. The last thing we need to do is make the herd smaller. I would not be surprised if it goes back to a true spike only unit. I cannot wait to draw that bull tag though!