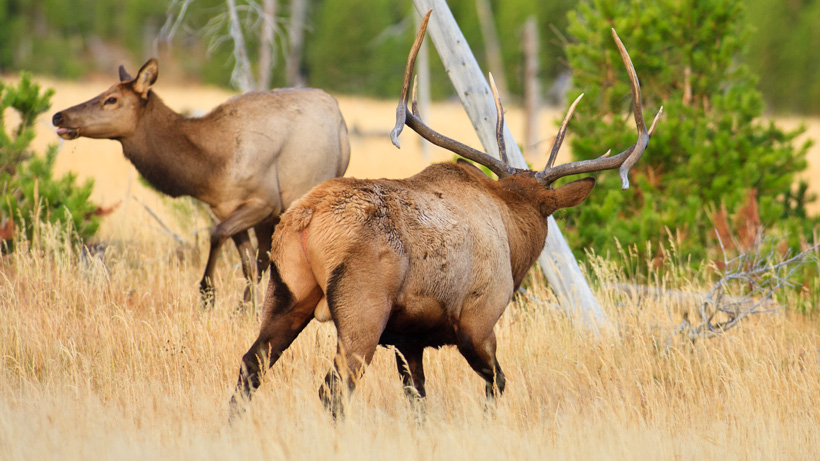 Two men were recently found guilty of poaching elk and deer in Wyoming. Kelly J. Grove and Spencer Carrico, both of Dubois, Wyoming, were sentenced earlier this year following a lengthy investigation that began on Nov. 10, 2018 and left a cow elk and doe mule deer dead.

According to the Wyoming Game and Fish Department (WGFD), Carrico and Grove were cruising along the Union Pass Road west of Dubois in Grove’s truck when they came upon a cow elk. Carrico used Grove’s rifle to shoot it; however, the cow elk vanished and the men “were unsure if Carrico had mortally wounded the animal.” But that didn’t seem to faze them since, the next day, they were out and about again. This time, Carrico shot a doe mule deer off of East Fork Road “from the road and inside the truck on a dare from Grove.” The men recovered the deer and gutted the animal a short distance away from where it was killed. The quartered animal was loaded into the truck and they took it home.

Neither Carrico nor Grove had an elk or deer license in 2018 and, according to WGFD, both men had been drinking while poaching the animals.

While Carrico was the primary defendant, because it was his first wildlife violation, he received a lighter sentence, especially since he cooperated with WGFD during the investigation and admitted to his crime. However, Grove was not a first-time violator and had previously served time for poaching a grizzly bear in 2015 and a bighorn sheep in 2007. According to WGFD, during the investigation, Grove “tampered with evidence” and only had a few of the lesser charges dropped because of a plea bargain.

“This man has a shocking history of violations. He’s been convicted of wanton waste of animals, including a bighorn sheep, he’s attempted to shoot the antlers off of live deer, he was on federal probation for game violations when he committed this crime and more. We appreciate the work of the Game and Fish in bringing us solid, well-investigated cases. The Fremont County Attorney’s office is pleased with the sentence that the circuit court handed down, in recognition of the intolerable history that preceded this case,” says Chief Deputy Fremont County and Prosecuting Attorney Ember Oakley.

Carrico was sentenced to two violations of taking an elk and a deer without a license. He was ordered to pay $6,110 in fines, assessment and restitution and lost his hunting and fishing privileges for four years in Wyoming and the other 44 states that honor the Interstate Wildlife Violator Compact. He was also sentenced to 90 days in jail (suspended) and one year unsupervised probation.

Grove plead guilty to two counts of accessory before and after the fact in taking big game without a license and one count accessory before or after the fact in the take of big game from a vehicle. He was ordered to pay $6,365 in fines, assessments and restitution and sentenced to one year in jail and three years supervised probation upon his release. Grove’s hunting and fishing privileges have been suspended for 18 years in Wyoming and the 44 states that honor the Interstate Wildlife Violator Compact. He also had to forfeit his Remington 700 .300 Ultra Mag bolt action rifle. Prior to this recent crime, Grove was on federal probation for poaching the grizzly bear and has an appearance scheduled in U.S. District Court for this violation.