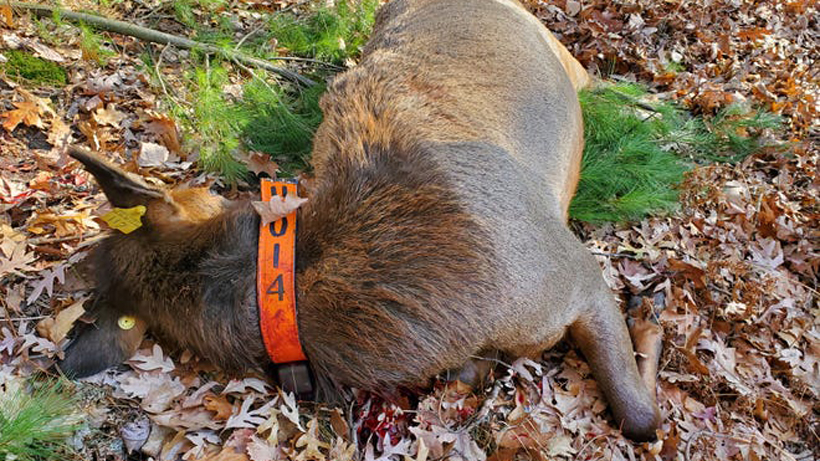 One of the two cow elk that were shot during deer season in Wisconsin. Source: Wisconsin Department of Natural Resources

Two Wisconsin hunters are in hot water after illegally shooting elk in Jackson County during the state’s rifle deer season. The two adult cow elk were shot during the nine-day season: one on public land at Lake Wazee County Park on Nov. 21; another on private land east of Milston on Nov. 23, the Milwaukee Journal Sentinel reports.

The Wisconsin Department of Natural Resources (WDNR) is currently investigating both incidents, but “preliminary information” shows that the elk were likely illegally shot due to misidentification. Both hunters – an adult and a juvenile – contacted WDNR to report the incidents.

While Wisconsin did hold a bull elk season this year, it only targeted elk in the northern herd – and only 10 bulls at that. Other elk within the state are currently protected. The elk shot near Milston was part of the herd relocated from Kentucky in 2015 and about 6 1/2 years old; the other was about 2 1/2 years old and native to Wisconsin, according to the Milwaukee Journal Sentinel.

The 2 1/2-year-old was wearing an orange and red collar.

This isn’t the first case of mistaken identity between elk and deer even though the coloration and markings are distinctly different. According to the Milwaukee Journal Sentinel, a similar incident occurred in 2018 when a bull and a cow were killed by rifle deer hunters and, in 2019, another hunter was ordered to pay $6,150 in citations for poaching two bull elk in Rusk County.

As goHUNT has previously reported, the state has worked for several years to reestablish elk herds within prior historic ranges, using elk relocated from Kentucky. Reintroduction efforts have proven successful. According to the Milwaukee Journal Sentinel, the northern herd currently numbers 225 while the central herd is at about 95 animals.