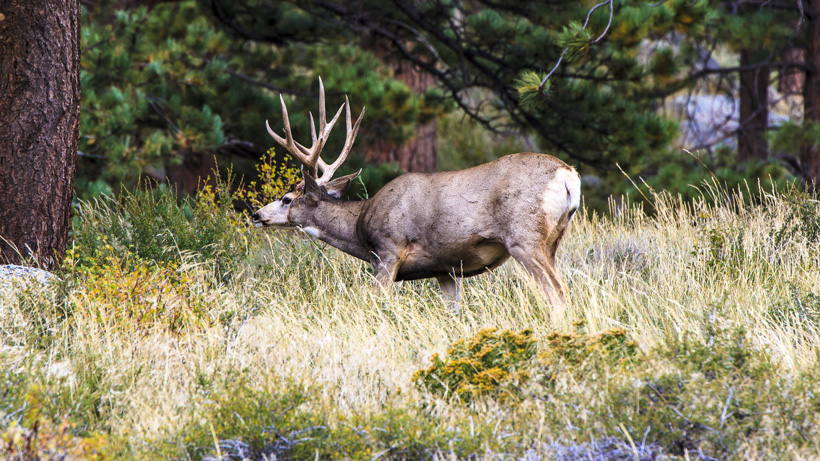 Thanks to an anonymous tip phoned into the Operation Game Thief Hotline last January, three Colorado poachers have pleaded guilty to illegally killing at least eight mule deer as well as other crimes. The guilty trio consists of a 17-year-old juvenile, his father John Pinnt and 23-year-old Levi Baysinger. According to Colorado Parks & Wildlife (CPW), the tipster told investigators that a dead deer was in the back of the 17-year-old’s truck even though deer season was closed. And, as the investigation continued, CPW discovered that all of them had participated in other criminal activity, including “poaching multiple deer, attempting to destroy evidence and a burglary case” currently under investigation by the Moffat County Sherriff’s Office.

“It appears they had killed quite a few deer over a long period of time, and if not for the tip it’s likely they would have continued to do so,” said District Wildlife Officer Johnathan Lambert, who served as lead investigator in the case. “Once again, this shows how critical the public’s help is when it comes to cases like this. We are always grateful when someone steps up and helps us out.”

While the juvenile initially denied poaching the deer, investigators discovered that the poached deer that had been spotted in the truck had been hidden in a rented storage shed; however, it “disappeared” before officers could recover the carcass. Further, Pinnt was seen by officers trying to then destroy evidence of deer DNA in the rented shed. Yet, there was still enough proof to link Pinnt and the others to the crime.

“That was all we needed to confirm that the dead deer in the back of his truck was the same deer that had been stored in the shed,” said Lambert. “And that’s how we tied these two suspects to the same crime, and the other crimes as well.”

The case took a rather troubling twist when CPW helped the Moffat County Sherriff’s Office with a burglary that happened on property Baysinger and the juvenile “had access to, at approximately the same time the juvenile poached the deer,” according to the report. When they investigated the property they found eight decaying buck mule deer carcasses—some without antlers, some without heads, others completely left to rot.

“It was a disturbing find,” said Lambert. “One of the buck deer heads found with antlers still attached contained eight .22 caliber bullets lodged inside the skull. With the assistance of the Colorado Bureau of Investigation, we matched the bullets to the pistol owned by Levi.”

According to CPW, the juvenile pleaded guilty to aggravated illegal take/possession of three or more big game animals and tampering with evidence, which is a class-six felony. He is required to serve an 18-month deferred adjudication, donate $2,000 to Operation Game Thief, complete 40 hours of community service and complete an 18-month supervised probation period.

Baysinger pleaded guilty to the willful destruction of a big game animal, which is a class-five felony. He is required to serve an 18-month deferred judgment and sentence. He has also pleaded guilty to criminal mischief in relation to the Moffat County burglary. For both charges, he must pay $2,393 in fines, donate $2,000 to Operation Game Thief, complete 40 hours of community service and complete an 18-month supervised probation period. He also had to forfeit his .22 pistol.

Pinnt pleaded guilty to obstructing law enforcement by destroy evidence and must pay $1,418.50 in fines and complete an 18-month supervised probation period. He is currently serving a five-year suspension of his hunting and fishing privileges in Colorado and the other 47 states that honor the Wildlife Violator Compact.

Baysinger and the juvenile also face a lifetime suspension of their hunting and fishing privileges following the review of their case by a CPW hearings examiner.

“Poaching wildlife is one of the most destructive crimes all societies face,” said Jones. “But no matter how hard these criminals try to evade law enforcement, we will do all we can to bring them to justice.”

I would have taken a finger from each

The case probably cost hundreds of thousands to prosecute. At the beginning of the story I thought they were all going to be in real trouble. The teenager has to do a WHOLE week of community service. That will teach him....

I usually don't post, but I agree, this is hardly a penalty. Such abuse of wildlife should be closer to a lifetime of banned hunting, felony's and large fines. It sounds like they hit the kid with the brunt of it, but you know the adults were well aware of it, likely taught the kid everything he knew. I hope they keep digging and hit the father with massive fines and punishments. Like someone said before, for less than half the cost of the gear/weapon cost I wear into the woods, you can poach 8 animals.... heck some out of state tags alone cost 2 grand....

What are you deterring with such petty fines and sentences? To get poaching to stop, it has to hurt the poachers with actual time and money. Teach them the value of a dollar. Make them wear a sign that reads "I am a poacher." at BassPro or any other sporting good store for a day.

For the price of a good rifle, one can get away with poaching...this has to change.

Ohio is socking it to poachers. Thats a fact.

Fine is far too low. My home state of Ohio has done a good job with this by fining people over 10000 for a single buck and large bucks in my area no longer mysteriously disappear
r like they used to

Seriously. Until there are REAL consequences this crap will continue.

Take something that is dear to them. Either hit poachers with fines so big it ruins their lives or take part of their body.

I am on board with either idea.

Either way, it will make people think before they do something stupid.

This slap on the hand BS that is going on in this country for ALL crimes is ridiculous.

I bet you those fines didn't even cover 10% of the time that was used to bust and process these knuckleheads.

Wow, you go Gary. I was just going to say they should have at least suspended their hunting privileges 2 years for each animal illegally killed, or maybe for life. The fact that they poached them is one thing especially if they needed food and would have eaten them but to out right waste them is lower than even a poacher. I don't have the words for it. Likely they did this for a long time. I guess the only solace is they were caught.

Once again. The punishment didn't fit the crime.

Should have cut their hands off and posted their pictures all over every hunting website in North America.