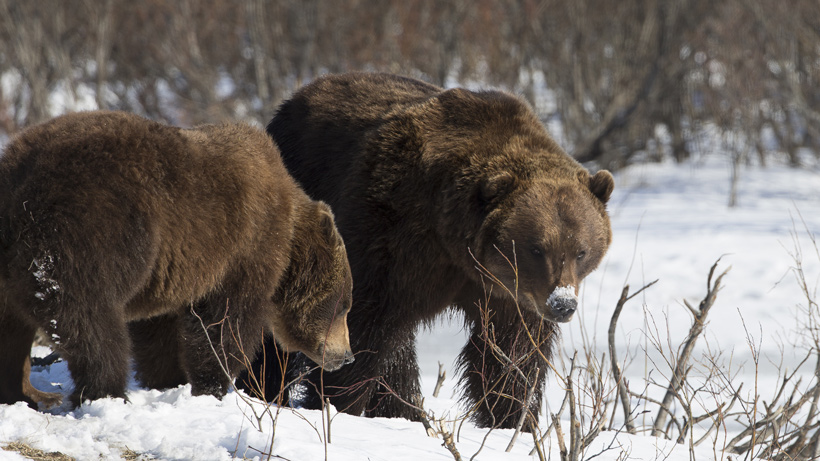 Wyoming has three fewer grizzly bears following an unsuccessful trapping and relocation effort. Earlier this year, Wyoming Game and Fish Department (WGFD) officials had to trap a sow and her two cubs after they were caught hunting cattle near Cody, Wyoming.

According to KCWY13, WGFD trapped the three grizzlies and relocated them to the Snake River area near Jackson, Wyoming, in September. Unfortunately, six weeks later, the sow traveled with her family nearly 150 miles back to the Cody area, prompting WGFD to contact the U.S. Fish & Wildlife Service (FWS) for guidance on what to do next. FWS told WGFD to “put them down,” KCWY13 reports.

“This is certainly the furthest east we have had to trap a grizzly bear, in recent history, as far back as the seventies. I don’t have history before that, but certainly, since grizzlies have been put on the Endangered Species List, we have not had to trap one this far east,” said WGFD Wildlife Supervisor Dan Smith.

FWS decided it was best to put the sow and cubs down because “she had gotten into trouble before, was too close to humans, and returned to the area from where she had been relocated,” KCWY13 reports.

Federal protections were restored to Yellowstone grizzly bears in a landmark ruling in September. Hunts scheduled for Wyoming and Idaho were canceled. In his decision, U.S. District Court Judge Dana Christensen says that the federal government neglected to use the best available science when it made its decision to remove the bears from the threatened species list last year.

I just can't wait to buy a grizzly tag.

Human actions leading to the near extinction of a species is not, historically speaking, driven by the species predatory threat factor to humans. Bison were nearly wiped off the face of the Earth (population dropped from 30 million plus down to under 2,000) in the 1800s. The rhinos are nearly extinct right now due to human poaching and habitat loss. These are just two easy examples of non predator species that have nearly been exterminated without ever posing a threat. To say grizzlies have nearly been exterminated because they are predators is an oversimplification.

I don't think anyone on this thread has used the term "living in harmony", but certainly co-existing should not be out of the question. I have no idea what the actual stats are, but living in the general vicinity of wildlife probably poses no greater percentage of threat to safety than going on a road trip for Thanksgiving. There are safeguards put in place for auto accidents to increase safety, just as there are safe guards that can be put in place around wildlife - ranging from human behavior during an encounter to the use of electric fence and electric bear mats to protect houses and garbages.

Timothy Treadwell didn't use safeguards that any sane, rational, bear-educated person would have used when in an area full of bears and eventually an ill intentioned bear did him in. It is a shame he was so reckless. Now he's the poster boy for everyone to point to and argue that all bears are inevitably dangerous killers. All species, humans included, have individuals that could be described as "ill intentioned". I simply point out that the vast majority of bears don't have some malicious or predatory drive to kill humans just like most humans would never commit murder and yet there are those that certainly do.

Living in "harmony" implies a form of higher knowledge and mutual understanding; which is a concept embedded in a human based value and prescribed-behavior context. Imperatives and guidelines which inform interaction with animals should be clearly distinguished from human values which aim to integrate value-based behavior in the context of the wild. Bears don't utilize human values with such "harmony" inclined value construct. They utilize, not limited too: behavior and what is known from their wild-context experiences.

I find one's desire to live in "harmony" with bears an interesting value. Timothy Treadwells actualization of his value was a great contribution to our understanding about the dangers of living in "harmony" with grizzlies. Those who value the "innocence" of the bear over the human involvement in the wild emphasize their omnivorous nature and their high dependence upon vegetative based foods. They nonchalantly overlook the repeated-historic behavior of predatory-type grizzly behavior toward humans. The historic context of grizzly behavior is a clear explanation for why the grizzly encountered extinction. If those grizzly dominant values suggest we avoid "wild places" and stay out of grizzly country then we obviously recognize with clarity about one's prioritized value system. The grizzly "protection" and "management" issue is based upon those value considerations—Which grizzly value is best to inform how humans should access and interact in the "wild" should be the clearly-stated-foundation for discussion.

Good one Samuel. Or just have Mary
(the bear whisperer) translate peace with the bears. Lol

If your in grizzly country always carry some fruit for defense, they will eat it first before they eat you since it's 80 percent of their diet, lol

Come on guys, quit with the bickering. Take that nonsense to facebook.

Timothy Treadwell interacted with bears too. Look what happened to him........

Wrong Jesse. Once upon a time i was ignorant of bears, but I haven't been that way in years. Even in my ignorance I didn't advocate for needlessly killing them. I now work with grizzly bears and interact with them on a daily basis. Bears are certainly capable of preying on other creatures but their normal diet is primarily fruits, produce, grasses/sedges, nuts, etc. With the exception of some areas like Kodiak island most bear's diets only consist of 10-20% meat/fish. There is a world of difference between a true predator like a big cat and a bear. I can speak with some authority on bears, but I won't on other species that I don't know much about. Just as you shouldn't on species you don't know anything about other than the fact that they are bigger than you, have bigger teeth than you, and their nails are way more impressive than yours. Just because someone is bigger than you does that make them a threat? No. Stop being so simple minded and learn more about others before you advocate for selfishly impacting other's lives out of unwarranted fear for your own. And yes I am referring to the lives of wildlife. Did you know bears are the only other species that show similarity to humans in their social interactions with friends/family vs strangers? Not even monkeys/primates exhibit the same common behavior with humans. Reading factual books about bears such as those written by Charlie Russell (Google them) or bearstudy.org would be a good start to educating yourself about wildlife instead of continuing with misconceptions based on fear mongering. I don't actually expect you to bother, but maybe others will be interested enough to do so. Living will always have some array of risk to it - car wrecks, food poisoning, pedophiles, murderers.... the real question here is: are we so unintelligent as a human race that we can't figure out a way to coexist with others? Or are we just that selfish that we only care about our own ideal lives and will eradicate all others so that we 'feel safer'.

It's just too bad that peoples ideals effect other people's livelihoods.

@amy
Your absolutely right,I know nothing of bears. But you're wrong I'm a sixth generation montanan I grew up at the base of the crazy mountains where I basically lived off of game. So I'd like to think I know what I'm talking about. I'd like to think I could live in harmony with bears but we're both Apex predators. Thanks Amy but you're the one without a clue sitting in a coffee shop dreaming of bears.lol

Jesse, you clearly know nothing about bears and live in fear of anything outside your comfort zone. Go back to the safety of your city where your kids are so much safer. Instead of an occasional chance exposure to bears just living their lives and minding their own business, you and your kids will be safe and sound amongst fellow humans. No worries for the safety of yourself and your kids amongst humans. Nevermind all the ill-intentioned pedophiles, rapists, murderers.... you'll sleep sound at night in your ignorance so long as your 1000 miles away from the closest bear.

@Jesse M. It is not playing God. It is about making a choice to fix what we screwed up. I'm not opposed to the hunting of bears. A bunch of biologists said we had fixed it enough and they were self-sustaining. What irks me is some judge decided to play biologist and make their own decision on the matter. Those bears moved east because their habitat is crowded. If that hunt had been allowed, maybe those bears wouldn't have wandered.

Should have trapped the bears and put them in Clayton's yard

It's too bad that people want to play God and bring Bears back to an environment that is no longer suitable for them. There is not enough food to feed the homeless and the poor, yet we have yuppies that want to see some stupid Aspen trees grow because there's no elk or deer to eat them. It bothers me deeply that I have to fear for my safety anywhere I go with my children. Sorry but I'm glad there's three less bearsto worry about.