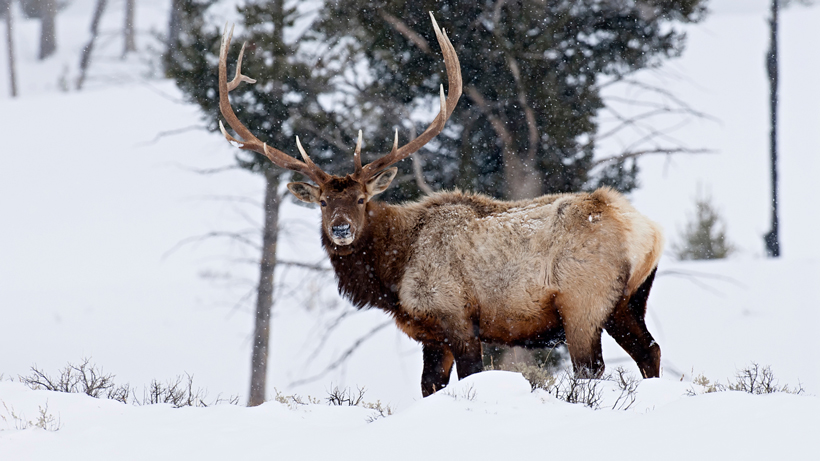 The elk were illegally killed on Aug. 18 after Benes left a party at a Hutterite Colony on Highway 12. According to the report, Benes whipped out a semi-automatic pistol and “unloaded” it on a group of elk after he was forced to slow down as the herd crossed the road.

“I’ll make these bitches move,” Benes said, according to his statement to state game wardens.

His errant shots killed two trophy elk—one of which ran 75 yards and was found in a nearby field; the other ran for nearly a half mile and was found in the field of the Kilby Butte Colony. It’s unknown how long it took for either elk to die, especially the second one, and Benes has been charged with aggravated animal cruelty for its suffering.

Only three days later, according to The Independent Record, Benes reacted to being “called a name” by one of his passengers by getting out of his truck, leaning over the hood and shooting a bull elk with a 7 mm rifle. That incident occurred around Dean Creek Road and Goulding Creek. While the third illegally killed elk wasn’t quite trophy standard, the state is “also charging the third elk as a trophy elk.”

This case could be a turning point in how game violations are prosecuted. Musselshell County Attorney Kevin Peterson notes that in 2011, lawmakers “enacted an amendment opening up the state’s criminal code…for prosecution in game violations.” Prior to that, only the state’s game laws were used for charging hunting violations. In fact, Peterson believes that this may be the first jurisdiction in Montana to use the aggravated animal cruelty statute in a case like this.

“Typically, somebody’s poaching wildlife, somebody’s taking it home and keeping it in their freezer and consuming it,” said Peterson.

Overall, Benes faces three charges of criminal mischief and theft and 16 misdemeanor game violations along with other charges that include animal cruelty—all of which carry a maximum possible penalty of $278,500 in fines and 83 years in jail or prison. Benes had previously had his hunting privileges suspended in 2018 after he was found guilty of purposely killing antelope with his vehicle. Regardless, according to Musselshell County Defense Attorney Kelly Varnes, “his client would plead not guilty on all counts.”

I'm Glad this guy got caught and they are throwing the book at him but the animal cruelty penalties could be a slippery slope. Lets say a guy makes a poor shot on a legal animal and it dies but not quickly. This too could be seen as animal cruelty to the liberal left animal rights activists. Obviously it wasn't with intent in the suggested scenario but a slippery slope none the less.

Wow. This guy has issues that run deep. The only silverlining here is Thank goodness it was wildlife and not humans that he took his issues out on. Clearly he's unstable. Glad he's in custody.

This idiot needs to be off the streets, I hope he gets a signification prison sentence. Unfortunately, it seems that most prosecutors do not take these cases very seriously. I hope the local residents cause an uproar so they take the case seriously.

I want to petition the state to revoke his lifetime resident hunting privileges and instead funnel those to 3 extra out of state tags per the next possible quota season/year/however they wanna do it. For the rest of his life. Or create a purge for just this dude. Cover him in honey and release him in the woods for bears. However their criminal justice code does this sort of stuff in Montana...