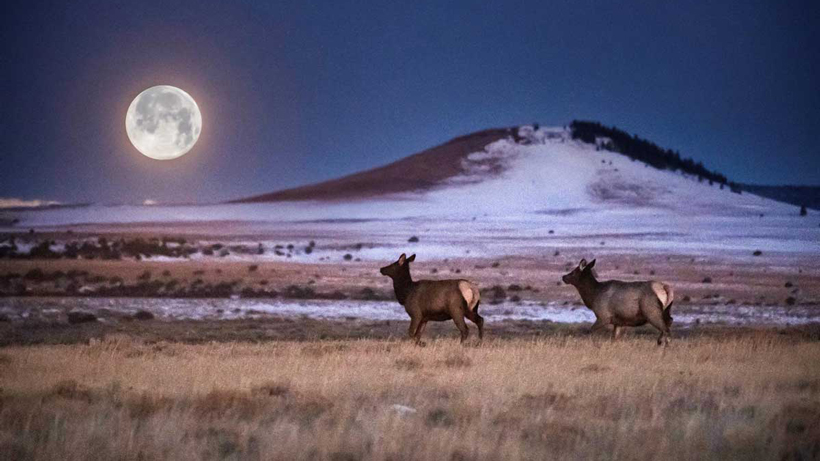 Elk have a secured winter playground in northern New Mexico after nearly 1,200 acres of critical range was recently preserved. The acreage, which was permanently protected and now open to public access, was a joint collaboration between the Rocky Mountain Elk Foundation (RMEF), Bureau of Land Management (BLM) and three families.

“This is a crucial swath of land and a key migration corridor for approximately 10,000 elk that move back and forth between New Mexico and Colorado,” said Kyle Weaver, RMEF president and CEO. “We recognize and greatly appreciate the Ortega, Santistevan and Thorne families for working with us to conserve this important landscape.”

The 1,188 acreage is the result of combining four separate parcels that were all in-holdings within the Rio Grande del Norte National Monument in the San Luis Valley, which is also known as Mi Tierra Encantada (My Enchanted Lands), according to RMEF. The area, which locals refer to as the Taos Plateau, falls within the Upper Rio Grande watershed.

“The acquisition of these parcels will enhance the BLM’s ability to protect fragile cultural, biological and scenic resources within the Rio Grande del Norte National Monument,” said Steve Wells, acting BLM New Mexico state director. “We are thrilled that through this effort and partnership with the Rocky Mountain Elk Foundation, the BLM is able to increase access to public lands for traditional and recreational activities such as fuelwood gathering, hunting, grazing and camping.”

The area was initially highlighted in the New Mexico Department of Game and Fish’s 2020 State Action Plan, which labeled the Taos Plateau as “one of four critical areas statewide to conserve key big game migrations.” Elk, mule deer, antelope, black bears, mountain lions and other wildlife use the area as a migration corridor. Further, according to RMEF, the area is also culturally significant with early Native American and Hispanic cultures documented as far back as 14,000 years.

Funding from the Land and Water Conservation Fund enabled BLM to complete the project.