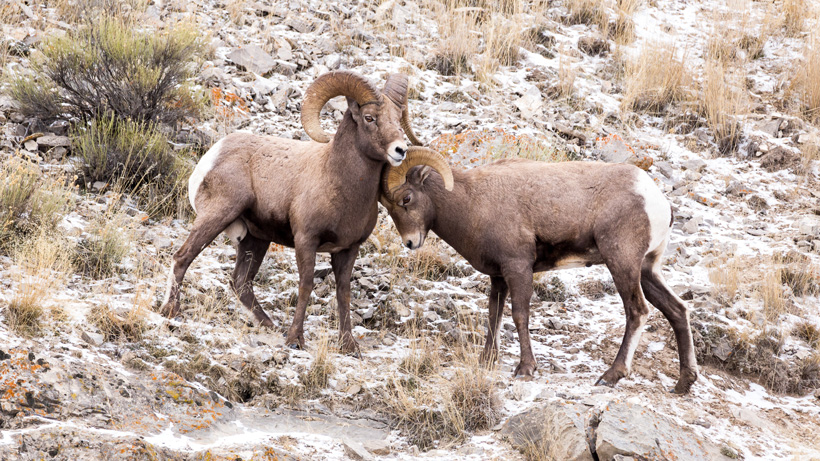 A collaborative testing effort between researchers, wildlife biologists and game managers from Idaho, Oregon and Washington has resulted in healthy bighorn sheep herds within the greater Hells Canyon region, The Lewiston Tribune reports.

“Where we are now is that we have healthy populations almost everywhere in Hells Canyon and the Blue Mountains. It’s awesome,” said Frances Cassirer, a wildlife researcher for the Idaho Department of Fish and Game at Lewiston and Washington State University at Pullman. “There is no pneumonia. There is no mycoplasma. It’s not present.”

While a herd in the Wallowa Mountains of northeastern Oregon is still not disease-free, the rest of the herds within the area no longer show any signs of pneumonia or the bacteria that causes the fatal disease in wild sheep. This is amazing news, especially since bighorn sheep herds across the West have experienced massive die-offs due to strains of bacterial pneumonia.

While the current greater Hells Canyon region is home to about 900 bighorn sheep, it once had nearly 10,000 bighorn sheep before early settlers caused the populations to decline after they began to use the same areas to graze domestic animals. In the 1970s, bighorn sheep reintroduction efforts began and herds were reestablished; however, “pneumonia swept through many of the Hells Canyon herds in 1996, killing about 300 animals,” according to The Lewiston Tribune. Since then, disease has continued to impact herds and lamb mortality has been high.

Infected bighorn sheep that survive the disease become immune, says Cassirer, but that’s a rare occurrence, leading researchers to come up with another theory that suggested “carriers within the herds, likely ewes…were infecting their own lambs,” according to The Lewiston Tribune. Infected lambs would pass the disease along to other lambs “through play.” Testing for carriers seemed to be a way to possibly stop the disease from spreading.

Wildlife officials in Idaho, Oregon and Washington started testing the theory and found that it worked.

“We had some different approaches in different populations, but in general we tested and we defined a carrier as an animal that was positive over two years on two tests,” said Cassirer.

Those who tested positive as disease carriers were removed from the herds.

“We just kept testing, and everywhere,” said Cassirer. “Except for one population, even though we had animals testing positive, when we came back the next year, they weren’t positive anymore. So there weren’t any carriers, and eventually we weren’t finding any positives at all.”

And it’s worked so far with an uptick in lamb survival and “signs of growth” within multiple herds. Next up: targeting bighorn sheep herds along the Salmon River and keep domestic livestock owners aware of the new carrier test. Researchers can test domestic herds that graze near bighorn habitat, according to The Lewiston Tribune.

“We are really concerned about that and it getting back into the rest of the sheep,” said Cassirer. “That is a really high priority. If they do have sheep or goats test positive, we talk to them about what options they might have to clear it from their herds, and if they don’t have it, that is good to know too.”