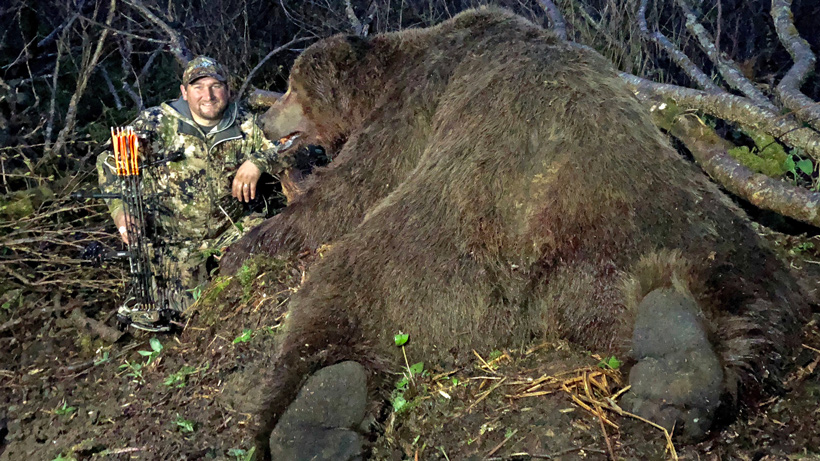 Chris Cammack holds the new world record for Alaskan brown bear. Last month, the Pope and Young Club (P&Y) assembled a special panel of judges to verify the size of Cammack’s enormous bear, which was shot on the Alaskan Peninsula in May 2018. According to P&Y, the score of 29 4/16” was confirmed, “surpassing Jack Brittingham’s 2004 bear by 1/16 of an inch.”

Cammack was delighted at the news and said:

“It is still so surreal to me, the thought that I would have ever had the opportunity to hunt an Alaskan Brown bear with my bow, let alone honored enough to harvest the new P&Y World Record. Thank you to everyone that helped make this dream a reality. Special thanks to my friend and guide Cole Kramer, and especially my wife, Felicia for supporting me and allowing me to chase my dreams. Usually, Felicia is right beside me with her bow in hand, but this trip she stayed home and took care of our baby girl, Davoni. Coming home to them is a true blessing. Getting to spend two weeks with my friends in the bush of Alaska was the greatest adventure of my life, harvesting a new World Record Brown bear was a bonus.”

Cammack’s bear skull has been entered into P&Y’s 31st Recording Period. According to P&Y, this period represents records attained Jan. 1, 2017 through Dec. 31, 2018 and, at the close of each biennial recording period, P&Y presents awards and honorable mentions for the “most outstanding bow-harvested animals in each species category” along with awards for new world records achieved during this time. In the meantime, you can check out Cammack’s bear skull as it will be on display during the annual P&Y convention, which will be held April 10-13, 2019 in Omaha, NE.