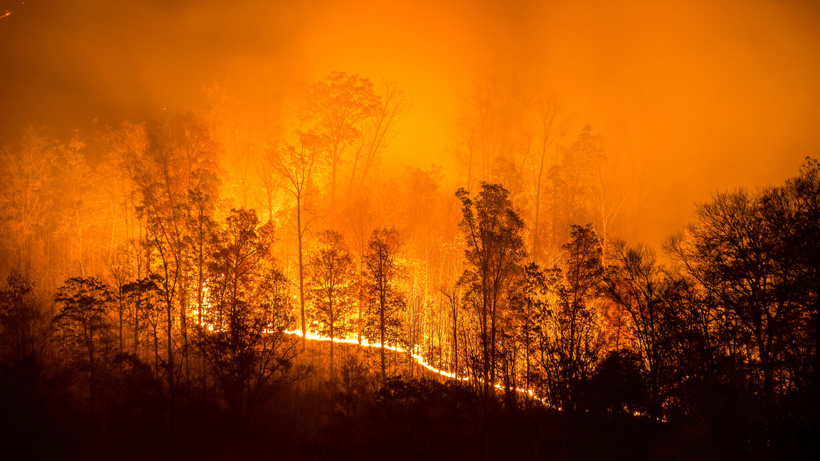 Wildfires have caused massive destruction in the West, turning critical habitat into ash, but are fire fuel breaks the solution? The federal government thinks so despite the possible repercussions to habitat, wildlife and, unfortunately, quite possibly the entire ecosystem. The Trump administration has proposed clearing 11,000 miles of fuel fire breaks across the Great Basin in Utah, Nevada, Idaho, California, Washington and Oregon “as a way to control giant wildfires,” Bloomberg Environment reports, and that land will be cleared through herbicides, bulldozers, mowers, grazing or an intentionally set fire.

“The direct effect of a fuel break itself is the reduced amount of available fuels should a fire move into fuel breaks,” said Marlo Draper, project manager for the BLM’s Fuel Breaks in the Great Basin project. “I don’t deny the uncertainty. The science will come in time. You have to have fuel breaks in order to study fuel breaks.”

Considered a “grand experiment” by the U.S. Geological Service (USGS), the proposal would add the additional mileage to about 6,200 existing fuel breaks within the Great Basin and greatly impact sagebrush and pinyon and juniper woodlands, according to Bloomberg Environment. A report conducted by USGS about fuel breaks found that, historically, they haven’t been consistently monitored or recorded and some federal data has shown wildfires to “have routinely burned through fuel breaks that were mapped in federal databases,” according to Bloomberg Environment.

And, while, technically, fuel breaks could work, they aren’t foolproof.

“It’s easy to create an overly ambitious plan that the human resources aren’t there to do it the way it should be done or the way we want them to be done,” said J. Derek Scasta, an assistant professor and extension rangeland specialist in the Ecosystem Science and Management Department at the University of Wyoming. “There are big questions with fuel breaks, too. At this landscape-scale, how do we establish fuel breaks that are long enough, wide enough, enough in number to actually affect fires?”

And they could only potentially solve the problem while leading to other issues: an influx of invasive grasses and other non-native species and fragmented habitat for wildlife and, in particular, the greater sage grouse.

“[I]deally we will reduce wildfire, or at least the risk of wildfire, but at the same time, there’s going to be potentially negative impacts from additional disturbance of the fuel breaks themselves, and it can be argued that that’s the lesser of the two evils,” said Douglas J. Shinneman, a USGS supervisory research fire ecologist in Idaho.

Those who work with wildlife and habitat in the targeted area are worried that the plan would destroy large swathes of land without any real benefit.

“Without any evidence and science showing that these are beneficial, it makes very little sense to authorize these projects that could have untold adverse effects on the environment,” said Neal Clark, wildlands program director for the Southern Utah Wilderness Alliance.

A draft plan was released by BLM in June and the public comment period ends Aug. 5.