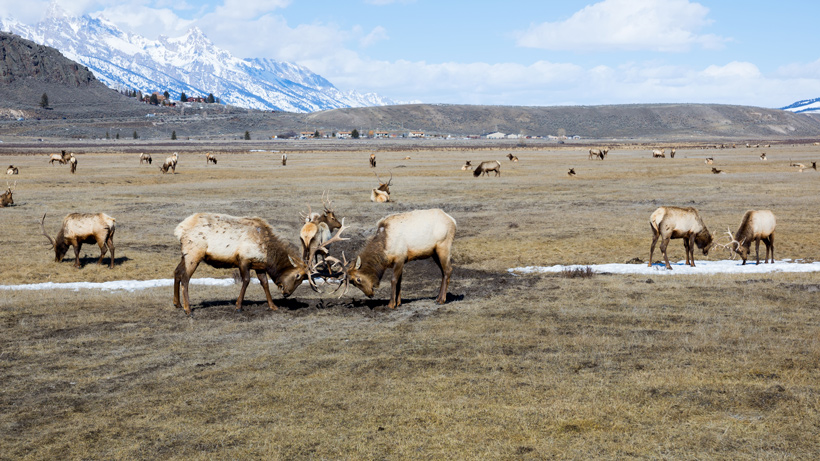 When food is hard to find, Oregon elk often turn to agricultural land, angering landowners who don’t want to deal with crop and property damage as a result. Lawmakers have recently proposed two bills: House Bill 3227 (HB 3227) and Senate Bill 301 (SB 301), which would allow the Oregon Department of Fish and Wildlife (ODFW) to “issues tags with more flexible rules for killing elk” as current “existing tools for managing elk damage have proven to be insufficient,” especially as elk numbers have soared, the Capital Press reports.

“It’s like someone coming into your living room every month and saying, ‘Give me 25% of your income,’” said Rep. Greg Barreto (R-Cove), chief sponsor of HB 3227.

HB 3227 would establish an “excessive elk damage pilot program” for Lincoln, Tillamook, Clatsop, Union, Morrow, Wallowa and Umatilla counties. SB 301 allows ODFW to look at overall elk overpopulation when issuing tags. Both bills allow for damage tags issued to “persons” instead of “landowners”—vague language that hunters say will only “expand the field of people who qualify to kill elk,” according to the Capital Press.

“This bill will allow for the senseless killing of elk during times when elk are most vulnerable,” said Fred Walasavage, board member of the Oregon Hunters Association (OHA).

However, something needs to be done. Current laws and programs aren’t doing much to keep this type of elk-inflicted crop damage under control.

“Hazing runs elk to your neighbors, fencing slows them down,” said Dan Leuthold, a farmer in Tillamook County.

In fact, elk damage threatens Oregon’s economy. According to Oregon Aglink, there are more than 38,500 farms in the state and the agriculture industry contributes more than $8 million to the state’s economy every year.

Regardless of the impact on the state’s economy, members of OHA, the Rocky Mountain Elk Foundation and the Oregon Bow Hunters believe the bills go too far and, in the words of Paul Donheffner, an OHA board member, “we think it opens the door to potential abuses.”